Patrons under plastic: Restaurants get creative in virus era
Share this
Return to homepage × 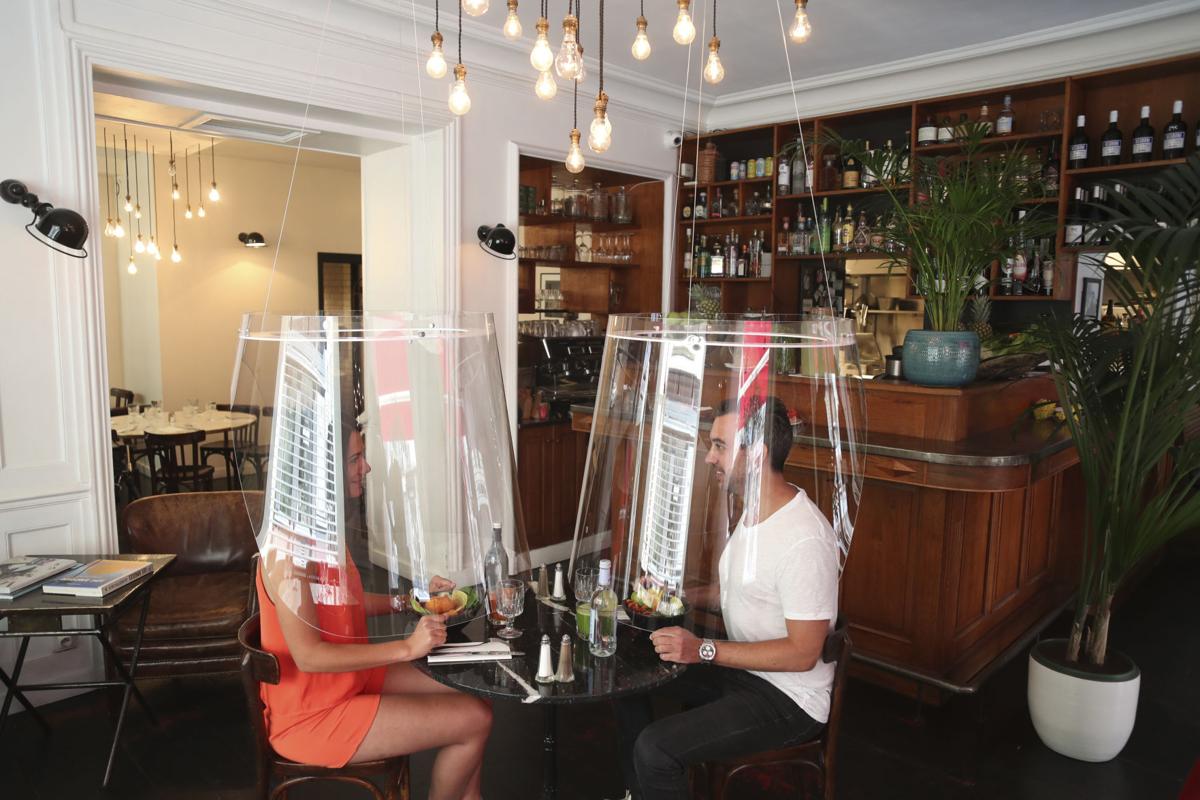 A man and a woman demonstrate dining under a plastic shield in a restaurant of Paris. 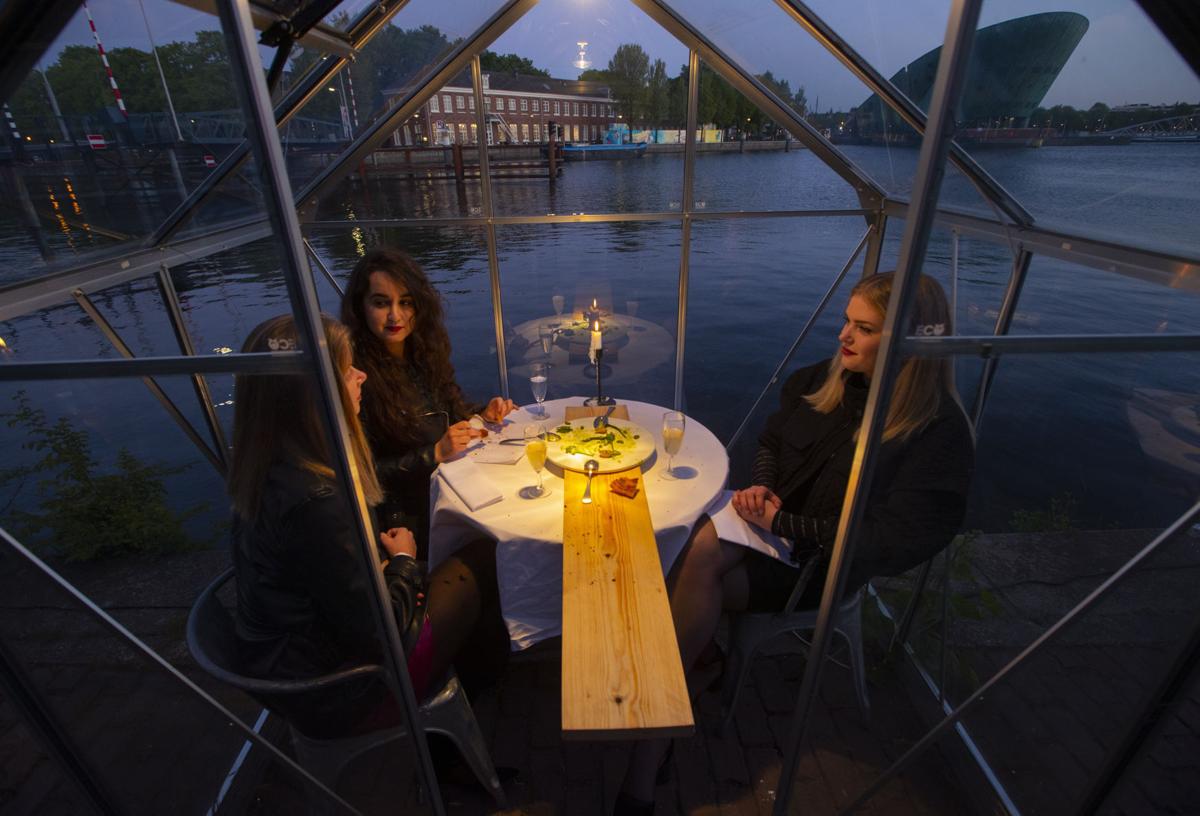 Staff at the Mediamatic restaurant serve food to volunteers seated in small glasshouses during a try-out of a setup which respects social distancing abiding by government directives to combat the spread of the COVID-19 coronavirus in Amsterdam, Netherlands.

Dining at a table where each person is enclosed by a clear plastic shield might look and sound futuristic, but it could be one way for some restaurants to reopen. It also might help out if your companion orders escargots, heavy on the garlic.

The prototype plastic shields are known as the “Plex'eat,” and they resemble big clear lampshades suspended from the ceiling. They are being showcased temporarily at H.A.N.D., a Parisian restaurant seeking a way to reopen its dining room as coronavirus restrictions are relaxed.

As restaurateurs around the world seek to resume in-person dining amid the pandemic, they want to adhere to social distancing rules while also trying to serve as many customers as health and safety measures will allow.

Some are putting mannequins at every other table to put some space between the actual customers, like at Augustas and Barbora, a restaurant in the Lithuanian capital of Vilnius. Some of its faux diners are dressed casually, while others look as though they are at a ball. The clothes showcase the work of local fashion designers.

“We want to fill the space with fun things,” said owner Patrikas Ribas.

Vilnius Mayor Remigijus Simasius called the initiative a “perfect match of communal spirit and creativity working side by side.”

At Amsterdam's Mediamatic restaurant, the owners have erected small glass houses that surround each table, served by waiters in protective shields.

While many restaurants offered take-out and delivery during the health crisis to keep generating at least some income, such practices are less common in France, although Michelin starred chefs such as Alain Ducasse have started doing take-out service.

Owners are seeking solutions that will coax back customers while also easing their anxiety about catching the virus.

Mathieu Manzoni, the director of H.A.N.D, said he thinks the plastic shields are a “pretty, more poetic” solution for restaurateurs who fear that social distancing could cut their capacity by half or more.

“There is a bit of a panic,” Manzoni said.

Makers of the Plex’eat say they have received more than 200 preorders around the world, including from France, the U.S. and Japan.

Designer Christophe Gernigon said he got the idea after visiting a store in Bangkok “with three individual domes with chairs where people would sit and listen to music.”

He merged the idea with the large face shields that have proliferated since the pandemic began, although there is no filtration system to keep any viruses from spreading.

Being French, there's a version for more intimate dining, of course: a dome that cocoons its occupants in romantic isolation from the rest of the room.

Among other revamped restaurants across Europe:

— At El Salamanca, a Barcelona beachfront restaurant known for paella, menus are gone and customers use their smart phones to scan a QR code to consult what is on offer.

— Greek restaurants are using salt and pepper sachets inside of shakers, and menus are either thrown away after each meal or are laminated and wiped down regularly. Many waiters have face shields. Some tavernas have staff in matching face masks.

— In the Russian city of Nizhny Novgorod, a restaurant on the banks of the Volga and Oka rivers has set up 20 plastic huts for couples. It is awaiting approval from authorities to open if it meets safety standards.

— Italian restaurants are using contact tracing. Diners are supposed to reserve tables ahead of time and owners are keeping their contact information: If someone subsequently reports testing positive, the restaurant can quickly identify and contact those who ate there at the same time.

Some coffee bars in central Rome also are attaching stylish arched glass partitions to divide tabletops down the middle.

From water to 'everything,' here's a look at every US president's favorite drink

Franklin Pierce earned the distinction of the drunkest president, while Abraham Lincoln was pegged the driest.

How risky is dining out during the COVID-19 pandemic?

How risky is dining out during the COVID-19 pandemic?

Here are the 5 health benefits of blackberries

Here are five health benefits you can expect, plus some simple ways to incorporate blackberries — fresh and frozen — into your diet.

Here's a look at some of the most popular domestic beers — listed from first to worst.

How to save money on food orders

Grocery and meal kit services come at a premium, but you can find some great deals to help feed your food-delivery hankerings.

As July begins, many blueberry farms in the Region are starting to have the popular blue fruit available for picking.

Foodie's Cafe in Dyer closed its doors Tuesday. The restaurant specialized in sandwiches, soups and other comfort food.

Today we enter the month of July and 2020 is already halfway over. It has been quite a year to remember.

The Kitchn: Giant Dutch babies are easy, tasty and thrilling

A man and a woman demonstrate dining under a plastic shield in a restaurant of Paris.

Staff at the Mediamatic restaurant serve food to volunteers seated in small glasshouses during a try-out of a setup which respects social distancing abiding by government directives to combat the spread of the COVID-19 coronavirus in Amsterdam, Netherlands.