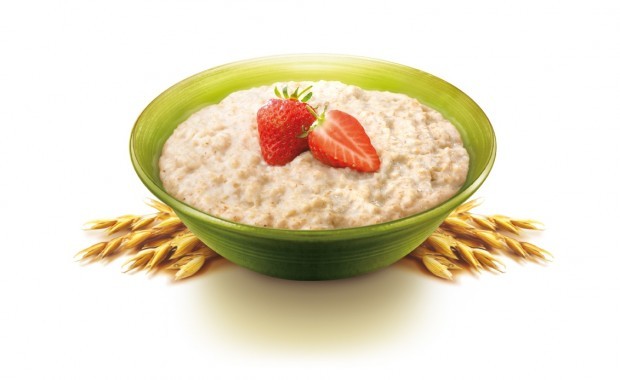 Porridge, the lawful food of medieval Ireland, is enjoying a Renaissance because of its health benefits. Unlike American oatmeal, the real McCoy is chewy and nutty. 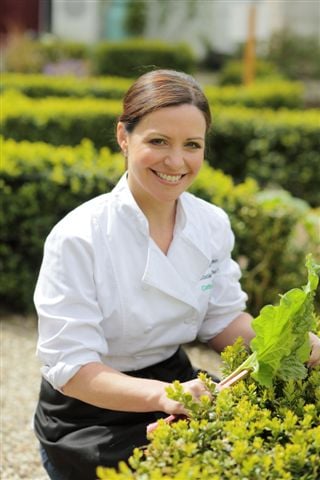 Chef Catherine Fulvio, owner of Ballyknocken House & Cookery School in County Wicklow in Ireland, balked at porridge as a child. But guests at her Victorian B&B clamor for her apple juice-laced version. 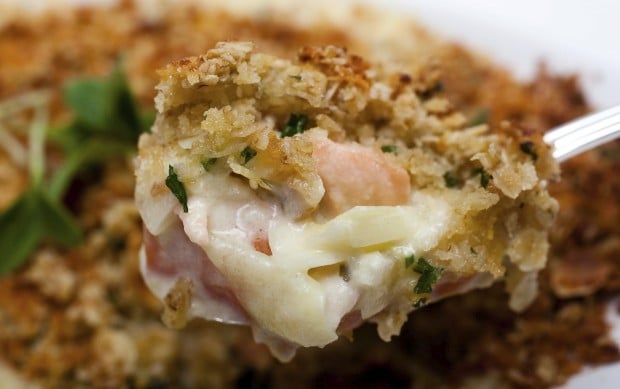 Canny Irish cooks use oatmeal in lieu of breadcrumbs in main entrees from fish pie (pictured) to shepherd's pie, variations on the all-American meat loaf. 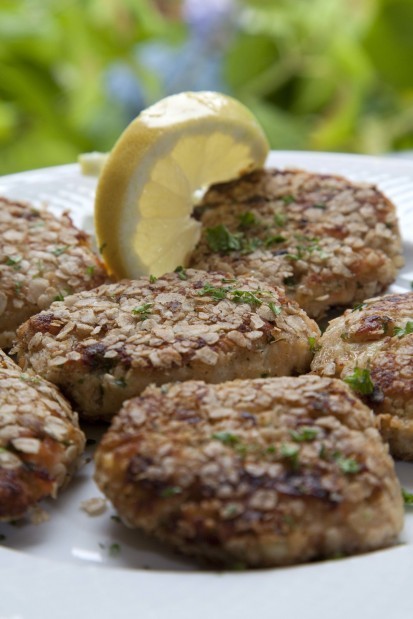 Porridge is hot in Ireland.

Piping hot, with a dollop of cream, pinch of cinnamon, or drizzle of honey.

Mmmm, add strawberries for sweetness. Or chopped apples for crunch.

Like Yanks, the Irish are more time-pressed and health-conscious, said Coyle, president of the Irish Food Board's North American office.

Porridge fits the bill, as boiled whole-grain oats are naturally high-fiber, low-fat (about 180 calories per cup) and teeming with B vitamins.

A daily bowl can lower cholesterol and the risk of heart disease. This nutty, chewy rib-sticker is versatile, too, embracing sweeteners, spices and fruit with gusto.

Compare that with "the cardiac on a plate," the traditional fry. The classic Irish breakfast - designed for tourists - features eggs, sausage, bacon, black and white pudding, and fried bread.

Busy Dubliners to Derrymen prefer a simpler start to the day, "and a lot of people would have porridge as an alternate to cold cereal," Coyle said.

The ancient Brehon Laws, in effect through the mid-17th century, proclaimed porridge as the lawful food for all. According to legend, good St. Patrick, a man of simple tastes, gave his blessing.

There there was a catch.

The higher one's social status, the grander one's gruel. Poor children made do with watery mush while chieftains' sons enjoyed heaping helpings of barley porridge with fresh milk and butter.

As for princes, they dined like royals on porridge "of wheaten meal, upon new milk, taken with honey."

Ancient bards sang the praises of porridge, and latter-day writers from James Joyce to Oscar Wilde mentioned the homey dish in their stories.

Less sentimental was novelist-satirist Flann O'Brien, perhaps a victim of too many gluey gruels in his boyhood. "Great holy suffering indiarubber bowls of brown stirabout," a character snaps in "The Third Policeman" (1967).

Like O'Brien, Irish chef Catherine Fulvio once turned up her nose at porridge. Her granny's version was beyond bland.

"When I was absolutely tiny, it was something children dreaded,' she said. "It was made with water and a pinch of salt, not particularly palatable."

She revised her opinion - and her gran's recipe - about a decade ago, when word of oats' wholesome benefits swept the island.

Today the second-generation chef-owner of Ballyknocken House, in Glenealy, County Wicklow, has guests clamoring for seconds of her fruit-juicy oatmeal.

Her secret: she stirs in fresh apple juice for flavor, and diced apple for texture. Her husband prefers a shot of Bailey's Irish Cream that gives his oatmeal a creamy-lyrical taste. Goldilocks would die.

Porridge "is cooked more creatively these days, which makes it more delicious," said Fulvio, who runs a cookery school next to her guesthouse.

"Everyone wants it. And everyone's child wants it," she said.

Oatmeal also adds sublime texture to baked goods, and is a heart-healthy thickening agent for vegetable soups and entrées like shepherd's pie.

You, too, can sow your wild oats, adding oatmeal to brown soda bread or cake recipes.

Fulvio likes to mix oatmeal with a little flour and sugar as a topping for fruit crumbles. "Put it in a food processor for a few seconds, then sprinkle it over," she said. "It's gorgeous."

Here are some recipes to kick-start your St. Patrick's Day festivities.

DIRECTIONS: Soak oatmeal with the water overnight. Then pour into a non-stick saucepan and add the milk, salt and sugar. Bring to the boil and simmer until the porridge is quite thick and slightly softened. This should take about 10 minutes. Add the apple juice, raisins and cinnamon. Simmer for another 3-4 minutes. Meanwhile, chop the apple, then add to the porridge and warm through. Transfer to serving bowls and top with the honey and cream.

DIRECTIONS: Sauté onion in oil until soft. Add oat flakes to the mashed potatoes together with fish, herbs, onion and enough beaten egg and milk to bind the mixture. Season with salt and pepper. Shape into fish cakes with your hands and dip each fish cake in oat flakes. Place frying pan on medium heat and cook fish cakes for 3-4 minutes on each side until brown in color. Serve with lemon.

DIRECTIONS: Heat half the oil, add the vegetables and garlic and fry until softened, about 5 minutes. Remove from heat and cool. Mix the oat bran with the oatlets. Stir in the vegetables, cheese, milk, egg and seasoning. Mix well. Shape into eight rounds and coat in oat bran. Fry patties in the remaining oil for 10 minutes, turning once until crispy and browned. Serve with favorite condiments. Serves 4.

DIRECTIONS: Pour boiling water over the oatmeal; let stand for about 10 minutes. Add the sugars and butter and blend until butter melts. Add eggs and mix well. Mix in flour, baking soda and cocoa. Add half the chocolate chips and mix well. Pour batter into greased and floured 9" x 13" baking dish. Sprinkle walnuts (if used) and remaining chocolate chips on top. Bake in a preheated oven at 350F for 40 minutes or until a fork inserted in center comes out clean.

"Never scald your lips with another man's porridge."

Historic brewery is making a case for reusable beer bottles

How to prevent obesity in senior dogs

How to prevent obesity in senior dogs

Has the world's best coffee bean been found?

Has the world's best coffee bean been found?

Porridge, the lawful food of medieval Ireland, is enjoying a Renaissance because of its health benefits. Unlike American oatmeal, the real McCoy is chewy and nutty.

Chef Catherine Fulvio, owner of Ballyknocken House & Cookery School in County Wicklow in Ireland, balked at porridge as a child. But guests at her Victorian B&B clamor for her apple juice-laced version.

Canny Irish cooks use oatmeal in lieu of breadcrumbs in main entrees from fish pie (pictured) to shepherd's pie, variations on the all-American meat loaf.