Sizzling meats: Tips on cuts and grilling preparations
Share this
{{featured_button_text}}
1 of 4 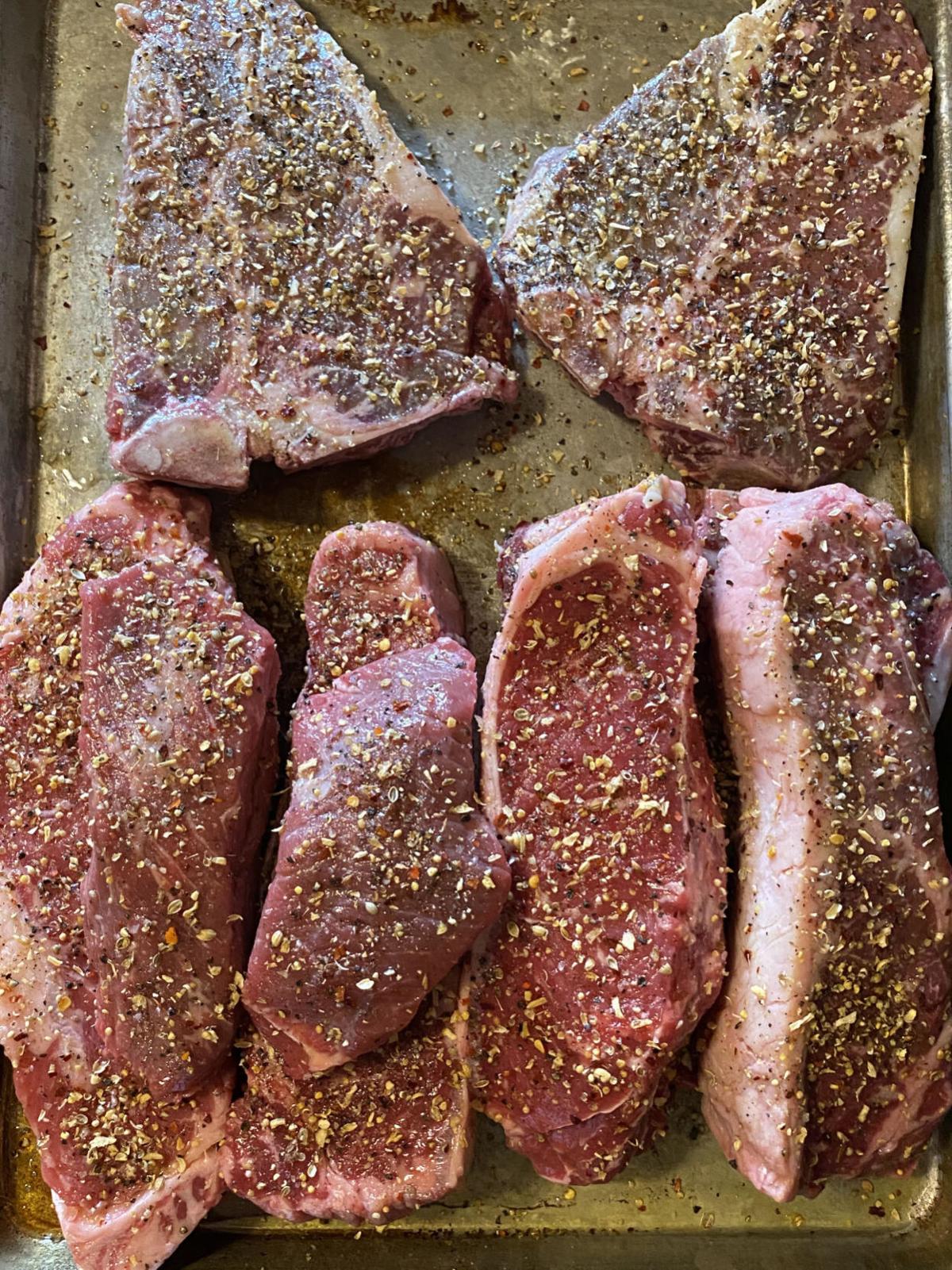 Steaks from Rob's Meat Chop & Deli in Dyer are oiled and seasoned before placing on the grill. 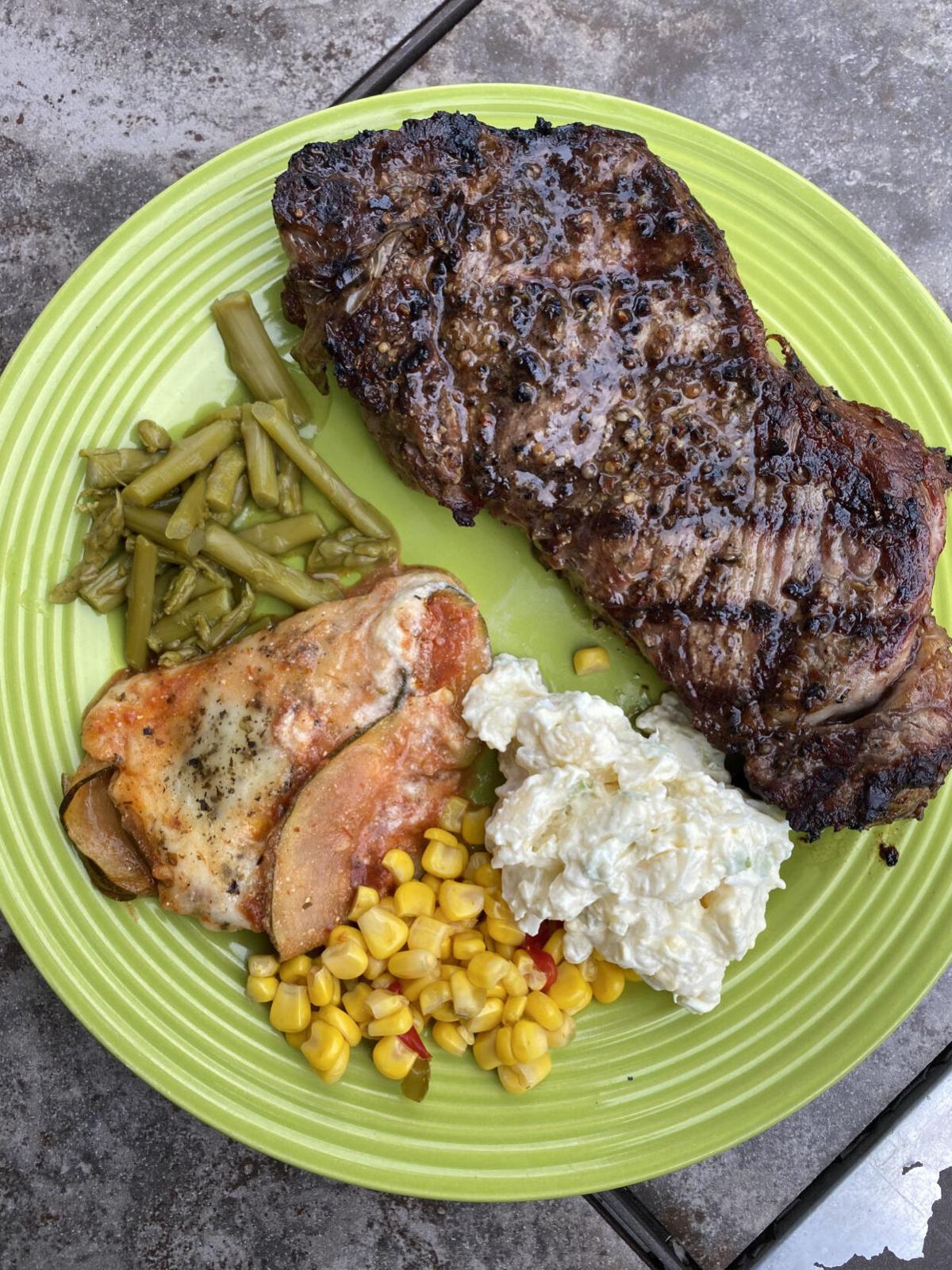 A grilled New York strip steak is the centerpiece of a summer meal. 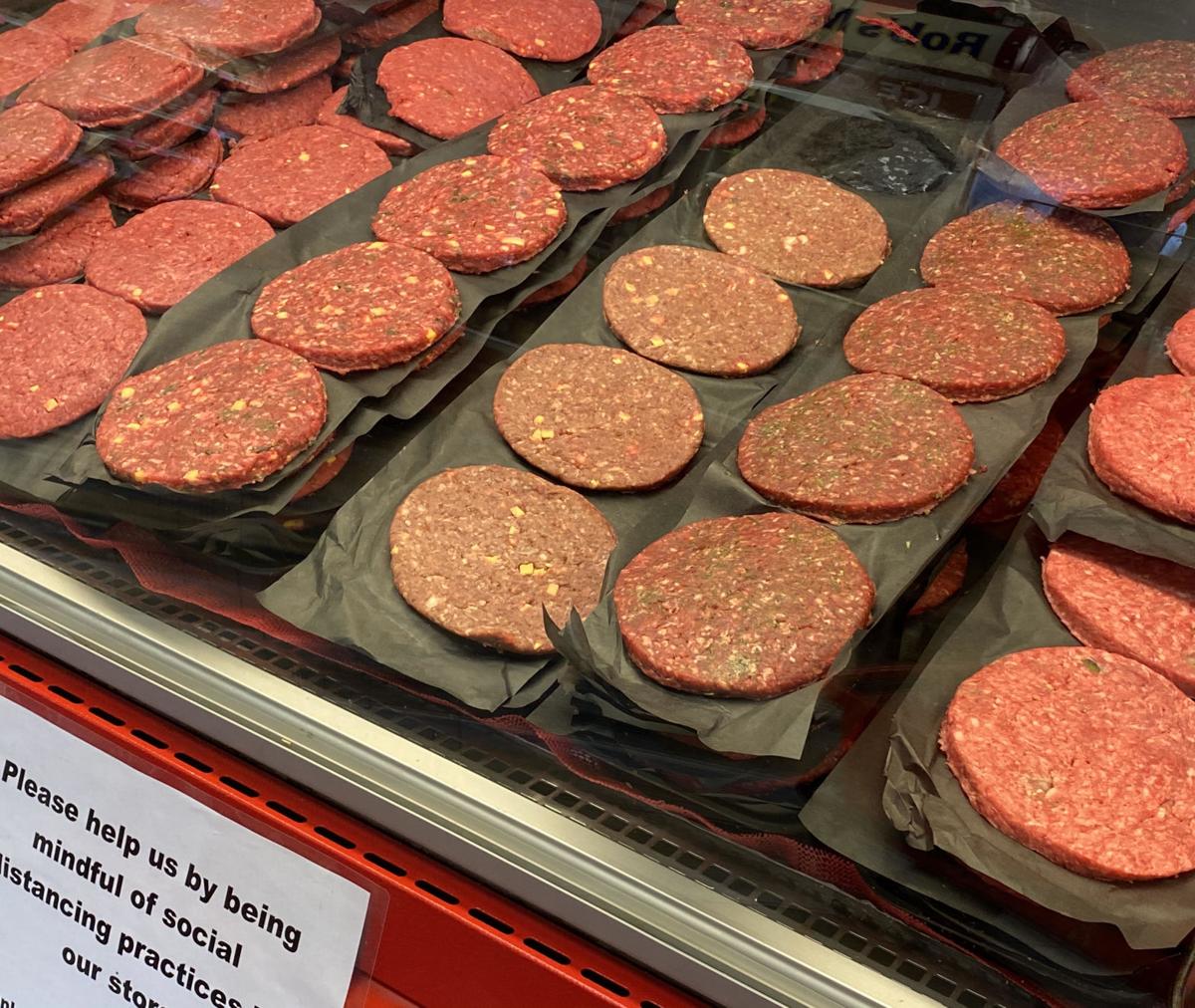 Burger patties are pictured in a case from Rob's Meat Chop & Deli in Dyer. 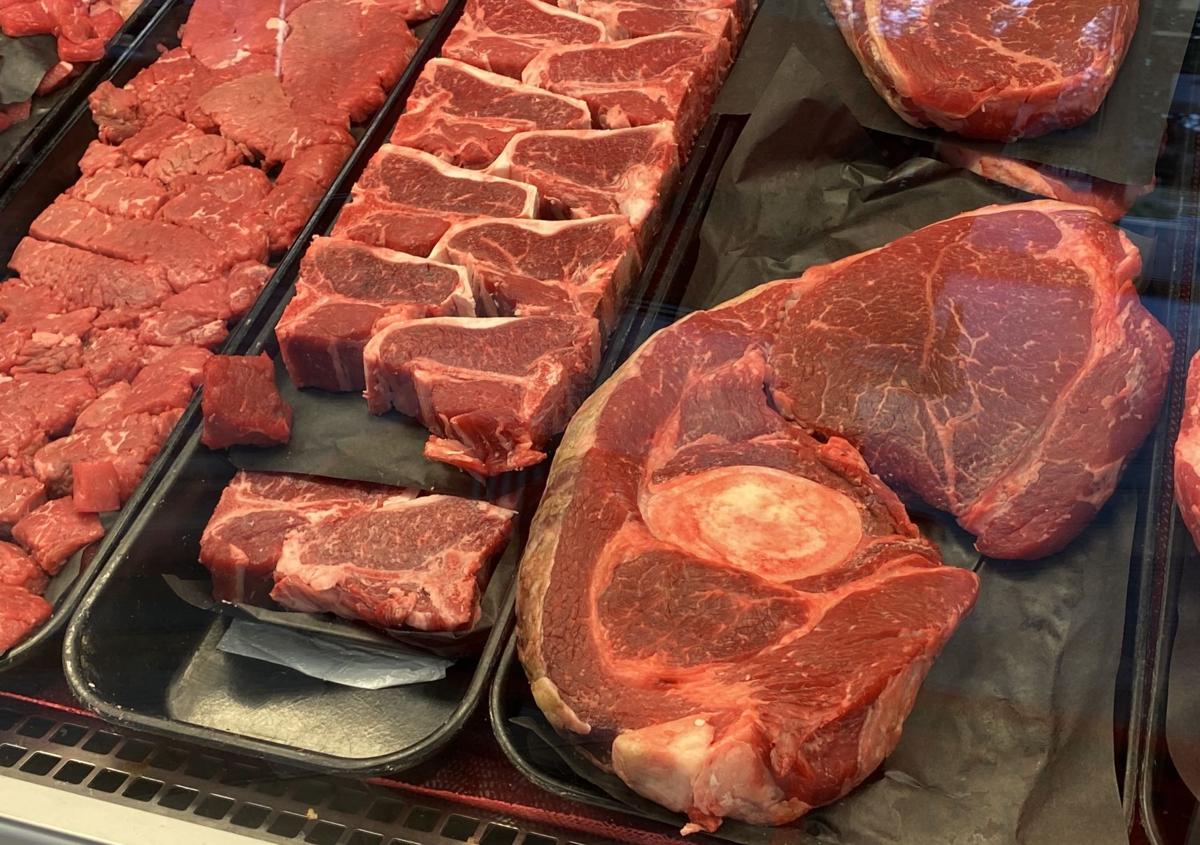 Various cuts of meat are seen in a case at Rob's Meat Chop & Deli.

Editor's note: For the next several weeks, The Times will be running grilling and barbecuing stories in the Food section. These stories are a companion to the Patio Pitmasters series that is currently running in Sunday Lifestyle.

Jim Drewenski, manager of Rob’s Meat Chop & Deli in Dyer, said steaks are categorized in three different grades - select, choice and prime. He said his store carries only the upper two-thirds, which would be choice and prime cuts.

As described on the USDA’s website, “Select beef is very uniform in quality and normally leaner than the higher grades. It is fairly tender, but, because it has less marbling, it may lack some of the juiciness and flavor of the higher grades. Only the tender cuts should be cooked with dry heat. Other cuts should be marinated before cooking or braised to obtain maximum tenderness and flavor.”

The next step up is “choice” beef, which is higher in quality, but has less marbling than prime cuts. “Choice roasts and steaks from the loin and rib will be very tender, juicy, and flavorful and are suited for dry-heat cooking,” as stated on usda.gov. “Many of the less tender cuts can also be cooked with dry heat if not overcooked. Such cuts will be most tender if braised, roasted or simmered with a small amount of liquid in a tightly covered pan.”

Prime falls at the top and its abundant marbling and tenderness comes from young, well-fed beef cattle. This is the grade you will often find in fine dining establishments and hotels. The USDA advises that prime roasts and steaks are excellent for broiling, roasting or grilling.

There are also standard and commercial grades of beef that are sold as ungraded or store brand meat. Utility, cutter and canner meat grades are used to produce ground beef, hot dogs and other processed foods.

Within each section of cow are different cuts that can be used for different purposes. Within the loin category are the cuts of steak that are some of the most popular meats to go on a grill.

“For grilling, some of our most popular cuts are the boneless ribeye, filet mignon, New York strips and porterhouses,” said Drewenski. “A ribeye has the highest fat content, so the best flavor.”

Another cut Drewenski said is available in their store that is becoming more popular is the Teres Major. It comes from the chuck section of the cow from the blade of the shoulder.

The loin comes from the back part of the cow. Where the meat is situated on the cow plays a big part in how tender the meat will be. “All meat on cows is muscles. How often it is used determines how tender. The muscles not getting used every day on the back are much more tender,” said Drewenski.

Colton Scadden, butcher at Woodfire Meat Market and Deli in Valparaiso names porterhouse, ribeye and filet mignon as his favorite cuts of meat for grilling.

Drewenski said his favorite grilling meat is a bone-in ribeye, but his next favorite is an outer skirt steak. The outer skirt steak offers more flavor than an inside skirt steak, he said. It’s a cut that is utilized frequently in South American cuisine. After being grilled and thinly sliced, it works well for fajitas or topped with chimichurri sauce. It can also be seasoned, grilled and chopped to make a filling for steak tacos. If you’ve ordered carne asada or arrachera in a Mexican restaurant, you’re getting skirt steak.

Beyond picking your piece of meat, there are a lot of ways to make your steak even better.

Marinades: “Beer, apple juice and pineapple juice all make good marinades as they help break down the meat and create a juicer steak,” said Scadden.

“As far as marinades go, you can use anything that is high in acidity,” said Chris Traynor, executive chef at PL8 Restaurant, a Chinese and Japanese restaurant in suburban Barrington, Illinois. “ If you’re grilling a skirt steak, you can use lime juice or pineapple juice.”

Meat Temperature: Rather than taking meats from the fridge and putting them directly on the grill, let them sit out for a bit. “Thicker steaks cook better at room temperature,” said Scadden.

Grill Temperature: “Making sure the grill is at the right temperature is key,” said Traynor. “If it is too hot, you will burn the meat and if it’s not hot enough you won’t get a good sear.”

Seasoning: There are a myriad of seasonings on the market and you can always make your own based on your taste preference, but Scadden noted that sometimes simple works best. “Keeping it simple with salt and pepper is always ok,” he said.

Make it Juicy: Marinades help to moisten meat, but another way to increase the juiciness is simply by salting meat before you cook it. “Salting before cooking helps pull juices to the surface to cook back through,” said Scadden.

“The best advice I could give a novice cook is to salt an hour before grilling,” said Traynor.

Reverse Sear: Both Drewenski and Scadden recommend a reverse sear. In this method, you cook the steak to your liking at a lower heat and then finish at a higher heat to get a nice char on the outside. Drewenski said it works good on a charcoal grill. Scadden said it’s a good method for thicker steaks.

It's apple picking season. Region orchards are offering U-Pick opportunities throughout the fall.

Odyssey Lake Michigan and Odyssey Chicago River, which are operated by Hornblower Cruises and Events, offer an entertaining time aboard vessels where tourists and Chicago-area residents alike can enjoy both the beauty of the Windy City as well as a variety of upscale food and drink.

Laura Kurella, a food columnist, cookbook author and contributor to The Food Channel, was recently named a winner in The Walmart Cooking Challenge. The challenge was sponsored by World Food Championships.

Grillin' and Sippin': What to pair with your barbecued fare

Some of the experts from some of the Region’s breweries, wineries and distilleries offered their thoughts on how best to pair alcoholic beverages with grilled or barbecue dishes in this article.

It's all in the Rub: Experts offer advice on enhancing flavor

Rubs are commonly used to flavor and marinate meat prior to grilling. Experts offer advice on using rubs.

Steaks from Rob's Meat Chop & Deli in Dyer are oiled and seasoned before placing on the grill.

A grilled New York strip steak is the centerpiece of a summer meal.

Burger patties are pictured in a case from Rob's Meat Chop & Deli in Dyer.

Various cuts of meat are seen in a case at Rob's Meat Chop & Deli.