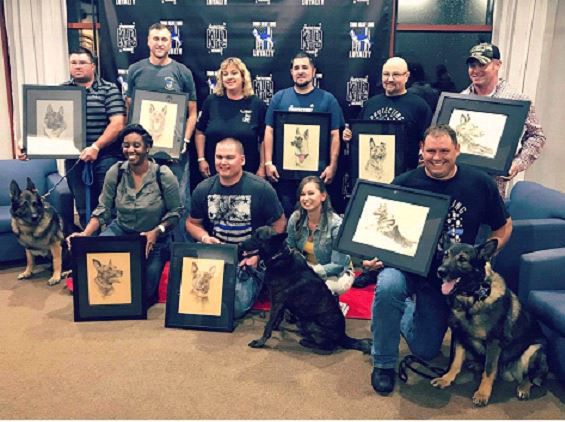 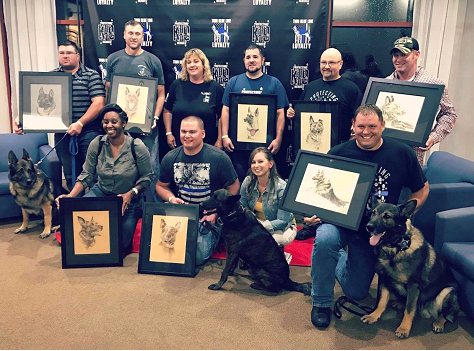 Protecting K9 Heroes honored K-9s and their handlers recently for "their service to their community and dedication to their departments," according to a news release.

The handlers, which mostly hailed from Northwest Indiana, received a custom portrait of their K-9 and a plaque during the nonprofit's annual Bash for the Blue and Camo 2 fundraiser Sept. 27.

The rest of the handlers and their four-legged comrades were honored with a little something extra.

K-9 Igar, who served alongside Cpl. JD Sickles at Dyer Police Department for nine years, retired in August. Shortly after his retirement, K-9 Igar was diagnosed with an aggressive form of cancer, the release states.

"There was no better way that we could honor Igar and his family except to celebrate his life with a lot of awards and K9 memorabilia," the organization said in a release.

Shortly after retiring, Sasja was diagnosed with "an extremely aggressive form of cancer," the release states. She died on Sept. 11.

At the event, Wolf was given a portrait, plaque, a custom law enforcement flag and a memorial box. The organization also held a celebration of life for Sasja during the event.

Sgt. Ryan Henderson, along with his K-9 Satan, of Texas, received the "Hero Team of the Year Award" after being separated for nearly five years. Henderson also was given a plaque and portrait.

Protecting K9 Heroes was presented with a $1,359-check from Ted's Feed Store following an eight-week fundraiser for the nonprofit.

GARY — Armed with a keen nose, four fast legs and a set of finely tuned ears, one police dog has apprehended hundreds of criminals and located…

'I feel like part of me is missing,' handler remembers Dyer K-9 Igar

In his 11 years, arson K-9 Bosco racked up nine felony convictions and helped investigators across northern Indiana secure charges in a number of other cases.

Having been recently diagnosed with cancer and losing his spleen in a surgery five weeks ago, Bosco cheerfully greeted the many people who came to wish him well Sunday.