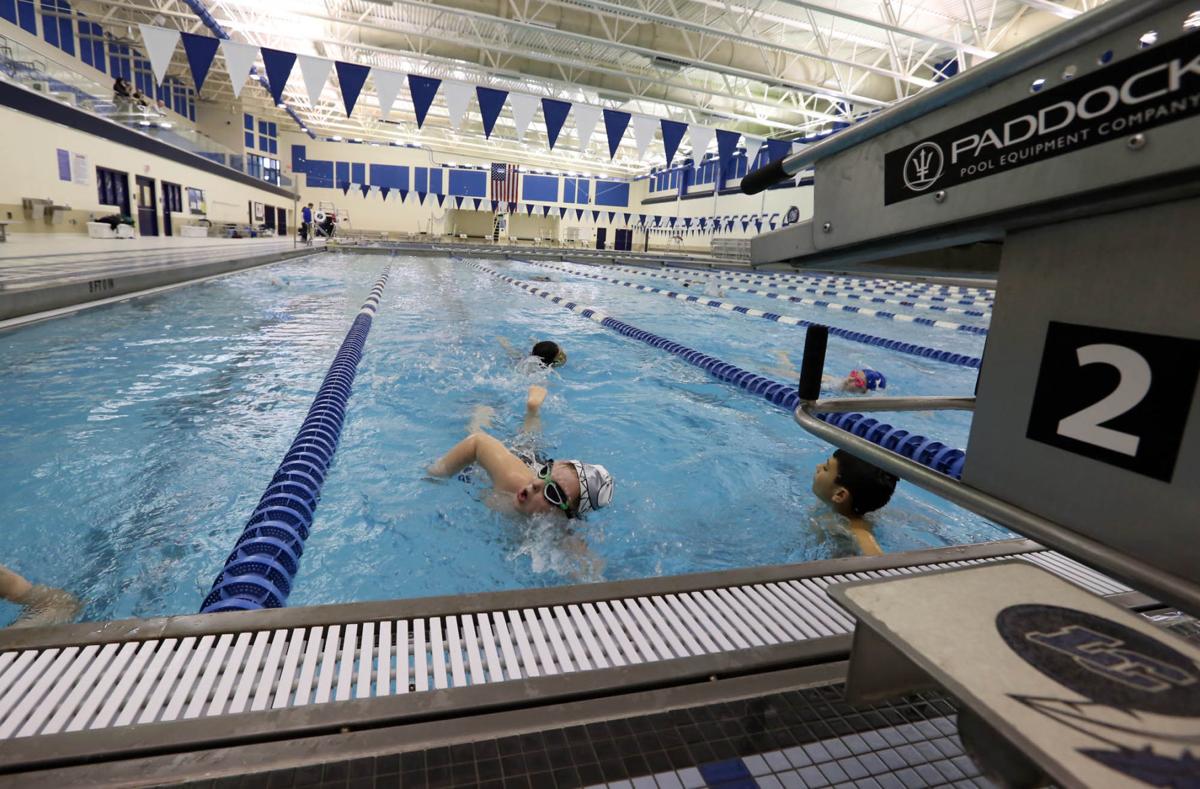 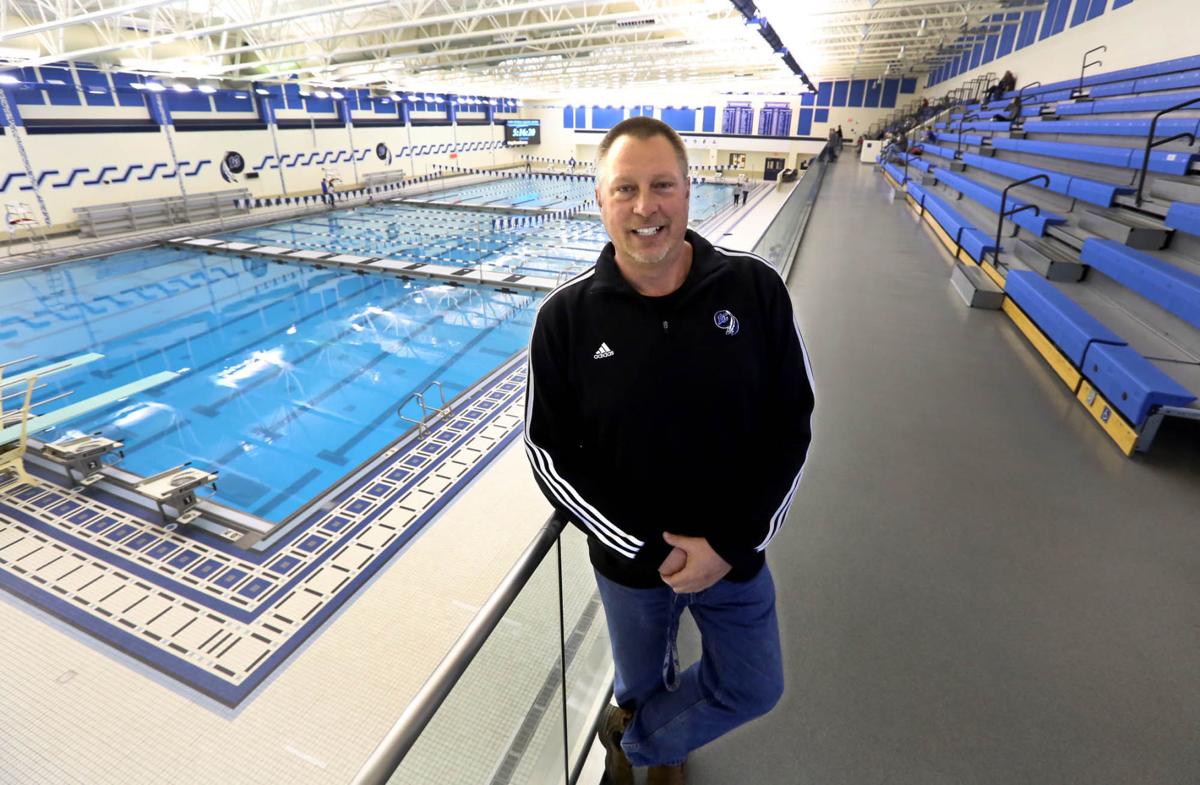 Jeff Kilinski stands in the Aquatic Center, which includes an Olympic-sized pool, at Lake Central High School in St. John. 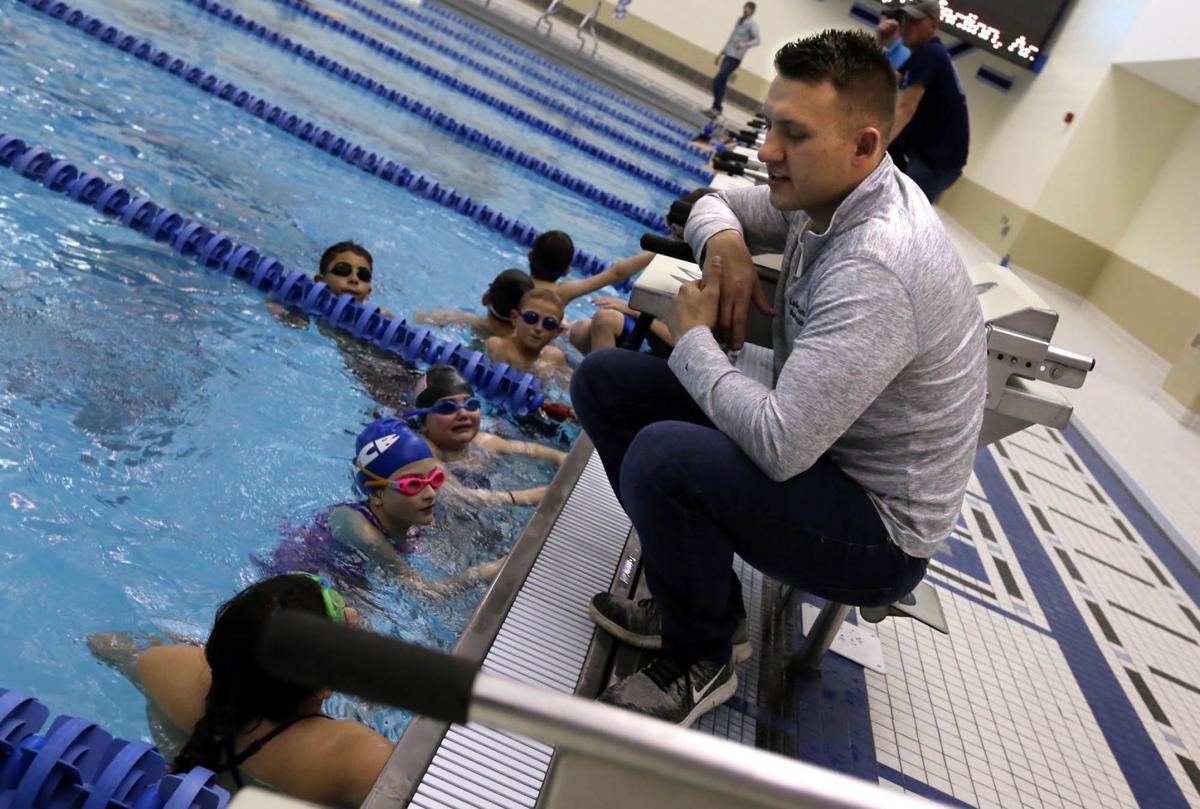 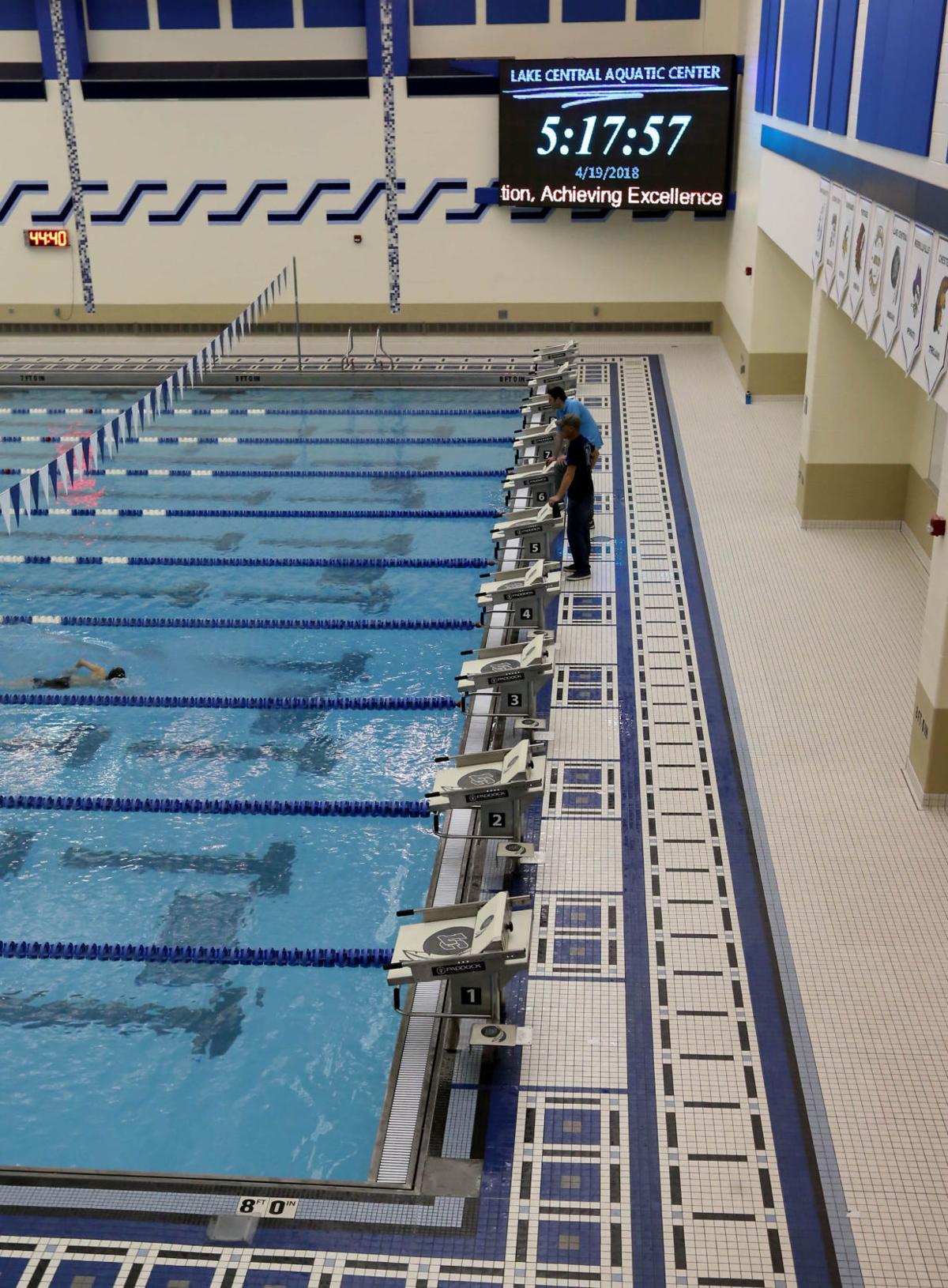 Swimmers and coaches with the Olympic-sized pool at Lake Central Aquatic Center. 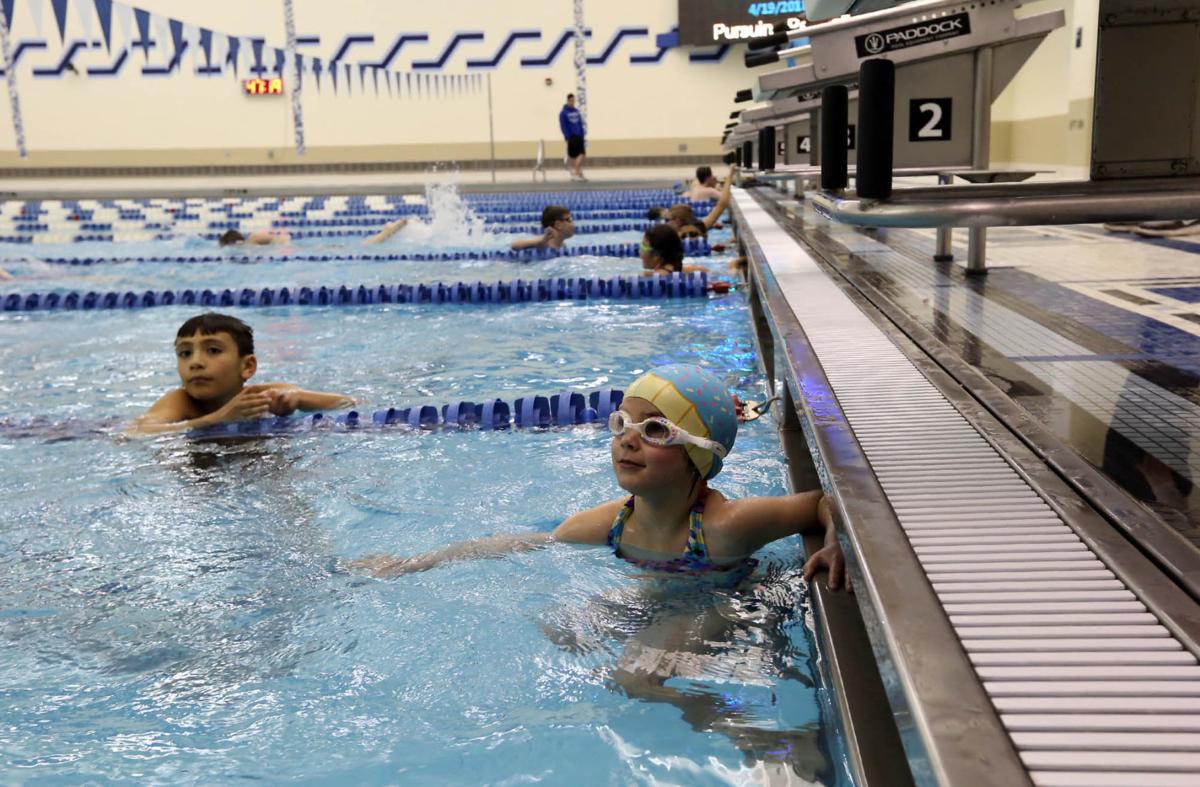 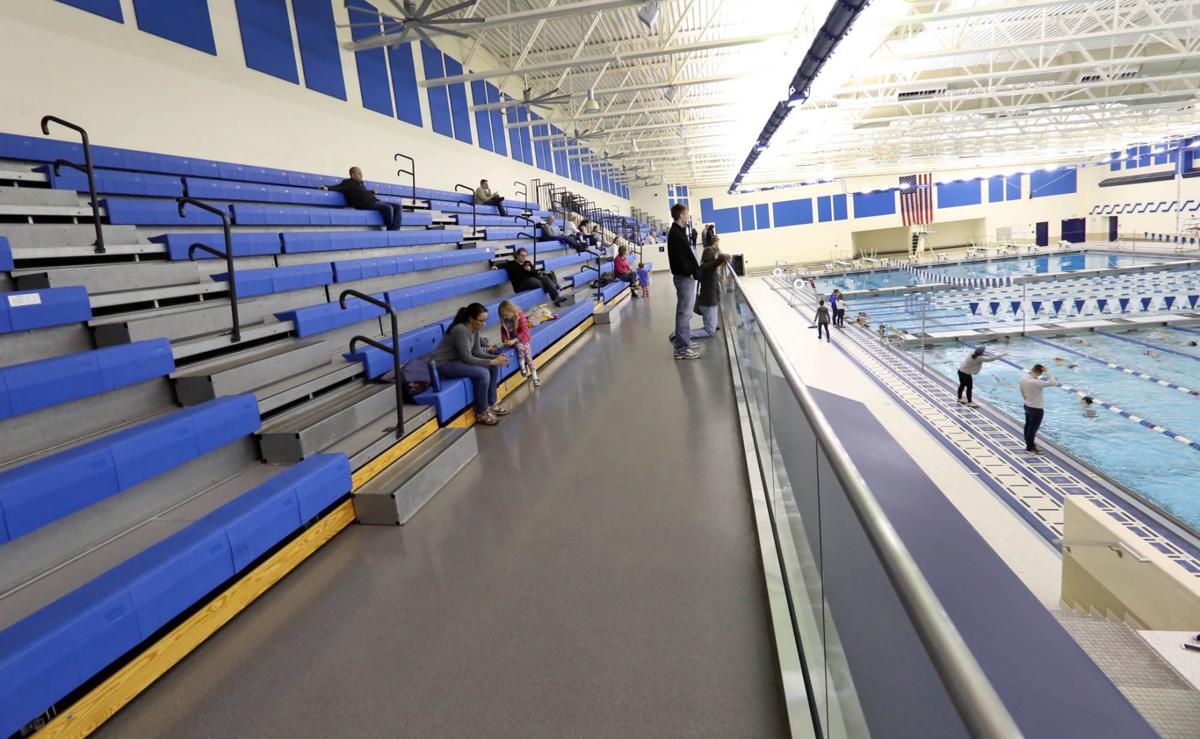 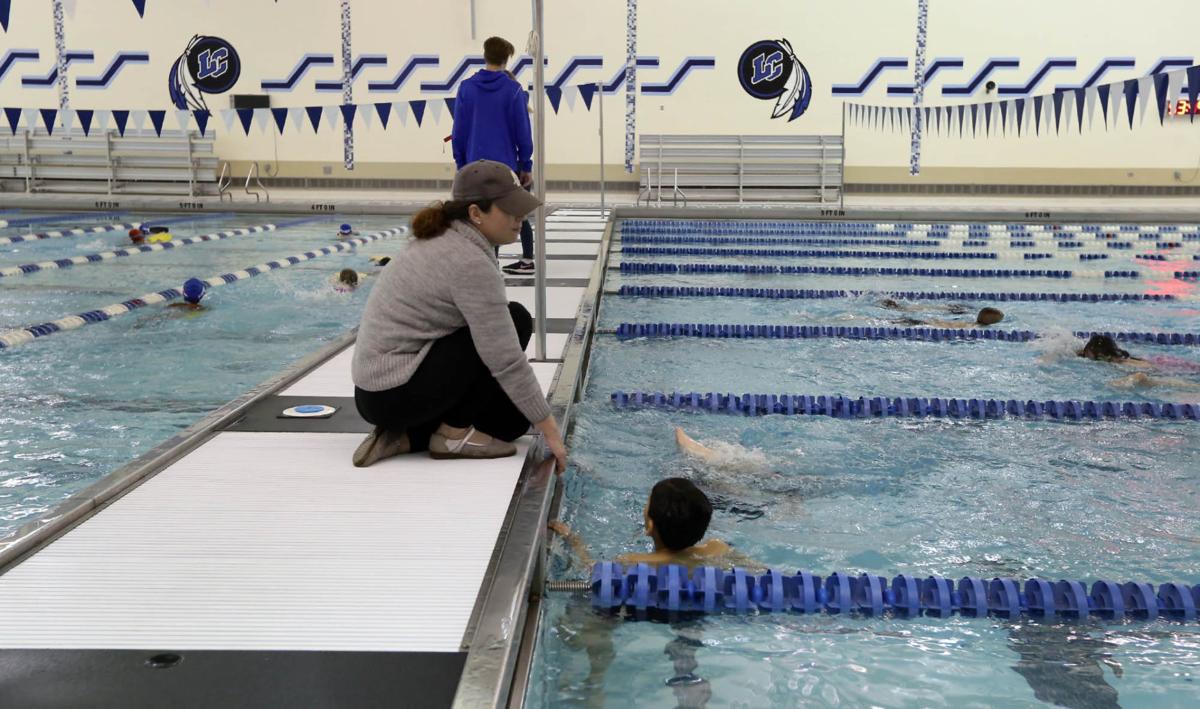 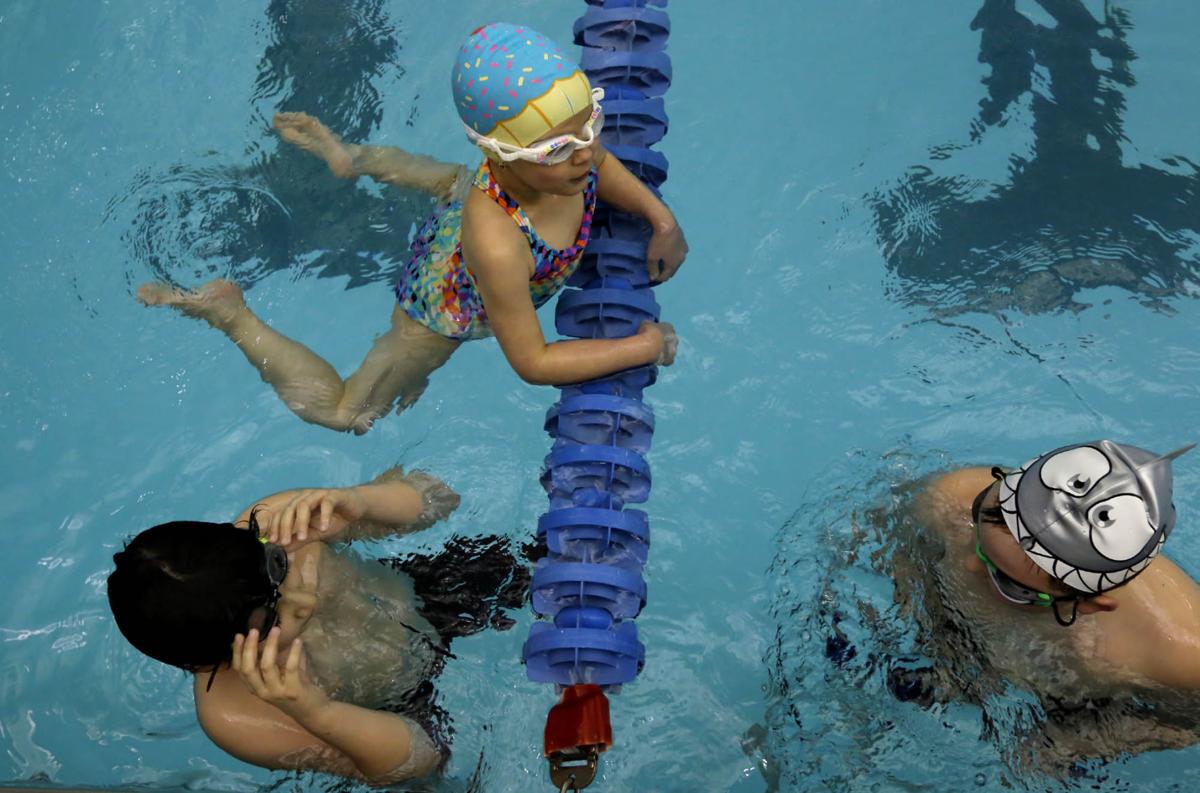 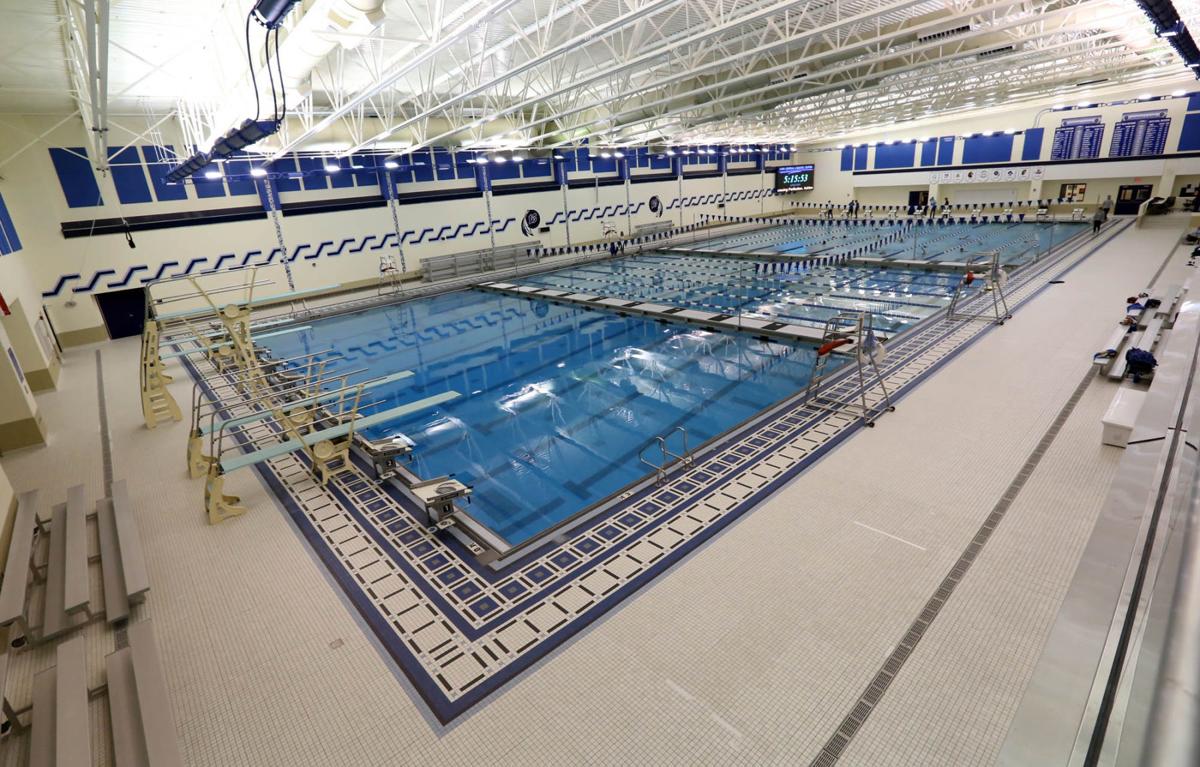 The Olympic-sized pool in the Lake Central Aquatic Center is shown.

Jeff Kilinski stands in the Aquatic Center, which includes an Olympic-sized pool, at Lake Central High School in St. John.

Swimmers and coaches with the Olympic-sized pool at Lake Central Aquatic Center.

The Olympic-sized pool in the Lake Central Aquatic Center is shown.

But Jeff Kilinski, director of the Aquatic Center, said its waters are rarely still.

It also draws swimmers from beyond the school district Tri-Town borders. "We rent out lanes to other teams from Valparaiso, some from New Lenox, Illinois, and all over."

Lake Central hosts the Illinois YMCA state swim championships in March and July. They draw more than 1,200 athletes and as many as 4,000 spectators to the area. "Our hotels and restaurants are wall to wall," he said.

It can accommodate all these activities because it is not your average swimming hole. Kilinski said you could easily fit 24 normal back yard in-ground pools into this 740,000-gallon behemoth.

It is one of only a handful of 50-meter Olympic-sized pools within a 100-mile radius of here, according to Swimmersguide.com.

The app, which locates swimming pools around the world, lists 17 such venues among 150 public pools in the entire state of Indiana and only four within the three-county Chicago area.

Kilinski, who was an All-American swimmer for Lake Central in 1986, took over as aquatics director about five years ago and is head coach of the Lake Central's boys varsity team.

"Indiana is a different breed. Go five minutes across the border and you have only a few 50-meter pools," Kalinski said.

He said an Olympic-sized pool is the international standard. The bulk of public pools in Indiana and Illinois are 25 yards long.

Matt Pavlovich, Munster High's swim coach, said his school has had a 50-meter pool since 2010. He said they, too, rent out their pool to other teams in need of big water.

Hobart plans to open a 50-meter pool in 2020 and Valparaiso has gone forward with designing a new 50-meter pool as well. "When I was growing up, the closest 50-meter pool was at Notre Dame," Kilinski said.

Lake Central School Corp. Superintendent Larry Verraco, refers to the multimillion dollar Aquatic Center as one of the crown jewels of the reconstruction of the high school.

Verraco said he believes inclusion of the pool helped boost support among voters to approve the $160 million reconstruction referendum in 2011 to improve the high school and Protsman Elementary School in Dyer.

Phase one of the project saw the opening of the Aquatic Center and a three-story, 100-classroom academic wing. A fine arts wing, which included a 1,000-seat auditorium, a competition gym and administration offices followed in the second phase.

Kilinski said the pool was built to enhance competitiveness, with motors in the filtration systems that draw water down its drains faster to make the pool's surface less choppy. It also has greater depth at the ends so swimmers meet less water resistance from the bottom of the pool when they turn laps.

He said the larger pool provides for less crowded and chaotic training periods.

"Before we would swim out of six lanes in the 25-meter pool," he said. "Now we have 20 lanes and no conflicts and are more efficient with our training goals."

Kilinski said the Aquatic Center hosts the Lake Central Barracudas, about 200 swimmers ages 5 to 14, who are joined in the summer by high school-aged swimmers and some returning college students.

He said the club is a feeder system for the high school swim teams, which currently include 35 girls and 28 boys.

He said they also host the Lake Central Masters Association, swimmers 18 years and older, who use the facility six days a week, primarily for recreational swimming and fitness.

"We host a number of birthday parties on the weekend. We weren't planning to do that in the beginning, but someone asked and it just took off and August through April we are booked almost every single weekend. Last weekend we hosted four parties.

"It gives people something to do during the winter months and employs lifeguards. A lot of people don't realize we do this and they absolutely love it. He said anyone interested in a party rental should contact him at the high school.

He said the revenues from pool rental help with maintenance.

"We aren't fully self-funded, but if a motor were to go out or something else break down, we don't have to take out the cost from the school budget.

"When we built our pool, the goal of Lake Central was to open it up and be a community service," he said. "By opening it up, the community has brought in money to help pay for facility costs."

With the school year underway, what better time to honor your favorite teacher in Northwest Indiana?

This information was provided by the Indiana Department of Education.

A list of 50-meter Olympic swimming pools in Indiana

A list of 50-meter Olympic pools in Northern Illinois

Anyone interested in rental information about the Lake Central Aquatic Center can contact Jeff Kilinski at jkilinsk@lcscmail.com or 219-365 8551, ext. 2118

Bill has reported in Lake County since 1972 after graduating from Indiana University. He has worked for The Times since 1997, covering the courts and local government during much of his tenure. Born and raised in New Albany, Ind., he is a native Hoosier.