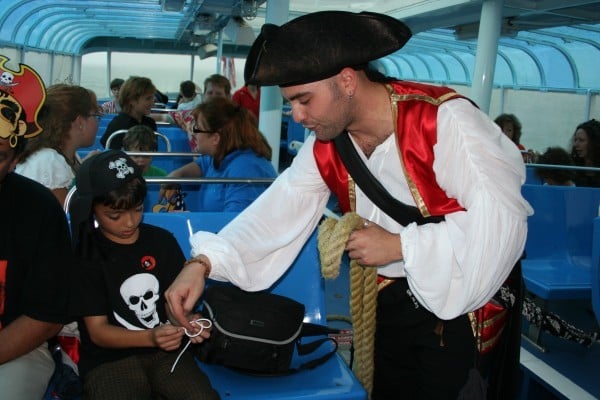 Buccaneer Bob demonstrates how to tie a knot during the "Wacky Pirate Cruise" on Mercury Chicago's Skyline Cruiseline. 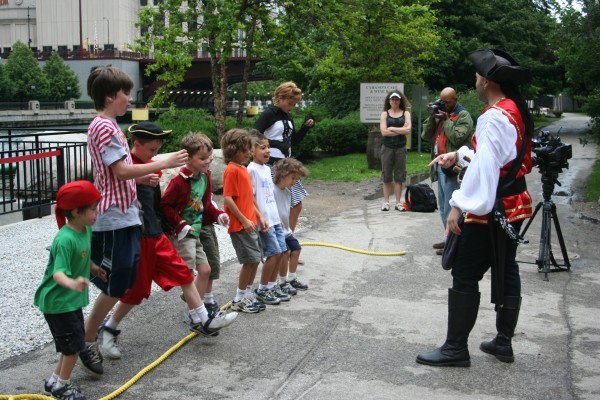 Aarrrggghh! Thar be pirates on Lake Michigan this summer.

But these swashbucklers won't be pillaging or plundering. They'll offer a plum good time and plenty of fun and adventure during Mercury Chicago's Skyline Cruiseline's "Wacky Pirate Cruise."

The specialty-themed cruise, now in its second year, features a 60-minute ride on Chicago's Lake Michigan filled with games, an engaging skit and some humorous pirate talk, lore and even some history thrown in. (It also sails a small stretch of the Chicago River on its way to the lake).

Top that off with a view of the impressive Windy City skyline.

Owner Agra is always looking for new and interesting cruises to add to the summer schedule of sailings. Among other themed cruises presented by Mercury are canine, ghost and architecture offerings.

Throughout the cruise, families will not only engage in banter with Buccaneer Bob and first mate Jeremy Williams but they'll learn a bit about Chicago's architecture and other sites such as popular Navy Pier.

"We want the kids to have a good time but we also want them to walk away having learned something from it," said Garvett, adding the educational component is also key.

About a half-hour prior to the cruise, Buccaneer Bob leads dockside games allowing children to get into the swashbuckling spirit.

Once onboard the boat, kids recite the Wacky Pirate Oath, receive a bandana, are encouraged to take part in a pirate parade, learn to tie a knot and even get a certificate of survival after the adventurous sailing.

Garvett said the skit performed on the boat has a written script but the actors are free to be spontaneous.

Mike Rigolo, who portrays Buccaneer Bob, has a theater background and will often improvise, Garvett said.

"I tell the guys to have fun with it," said Garvett, also an actor and director.

On the recent cruise, Buccaneer Bob told the crowd he'd have them speaking like "old salts" in no time and also taught a bit of boating terminology and safety in sailing.

"We like to add in a bit about boating so it has another educational component to it," Garvett said.

In addition to the cruise, a new feature has been added this year. O'Brien's Riverwalk Cafe on the Chicago River has partnered with Mercury to offer a Lil' Pirate Menu. Children can eat half-price when accompanied by an adult who pays for a full-price meal. For information on the restaurant's special menu, call (312) 346-3131.

Three yoga poses that will kickstart your morning

Three yoga poses that will kickstart your morning

Centuries ago, Native Americans made their way across the top of the Lower Peninsula, navigating the chain of lakes and rivers that connected …

Buccaneer Bob demonstrates how to tie a knot during the "Wacky Pirate Cruise" on Mercury Chicago's Skyline Cruiseline.

Dockside games, led by Buccaneer Bob, are part of the fun prior to Mercury Chicago's Skyline Cruiseline's "Wacky Pirate Cruise."
© Copyright 2021 NWI Times, 601 W. 45th Ave. Munster, IN | Terms of Use | Privacy Policy
Powered by BLOX Content Management System from TownNews.com.
You don't have any notifications.