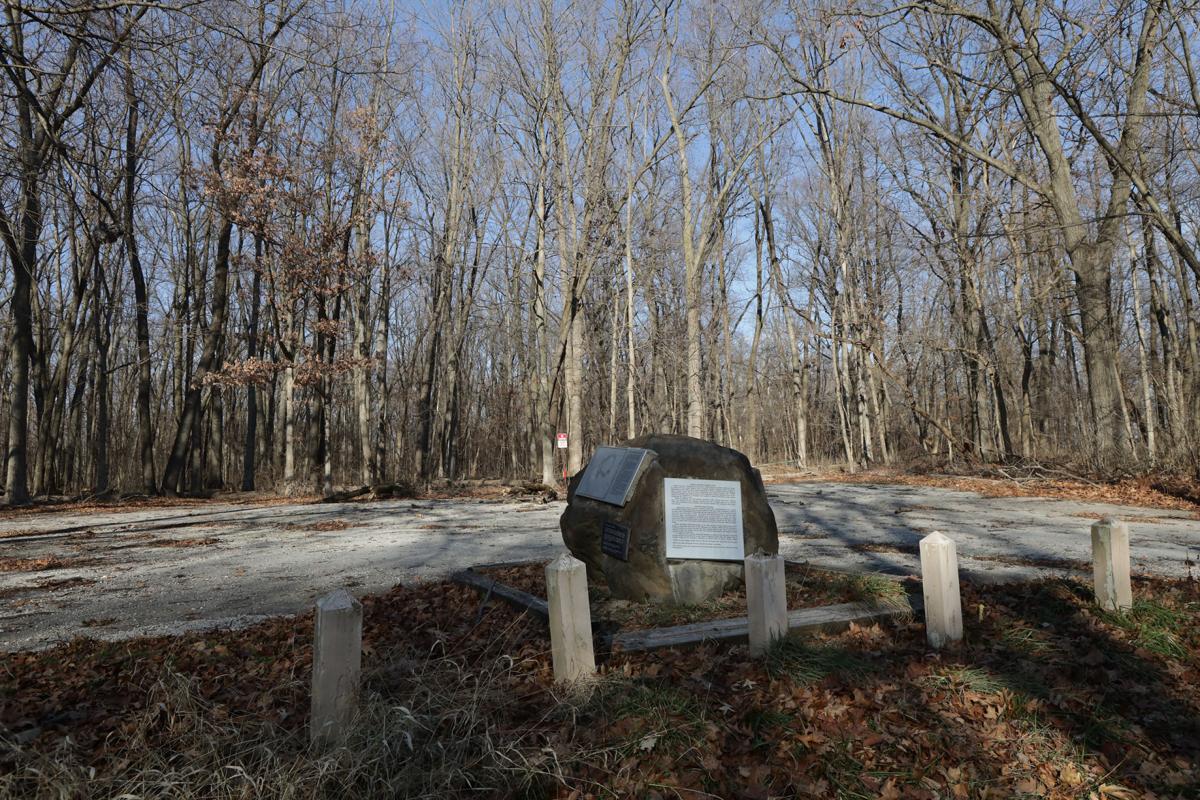 Information is posted at the entrance to what is known as the Old French Fort. 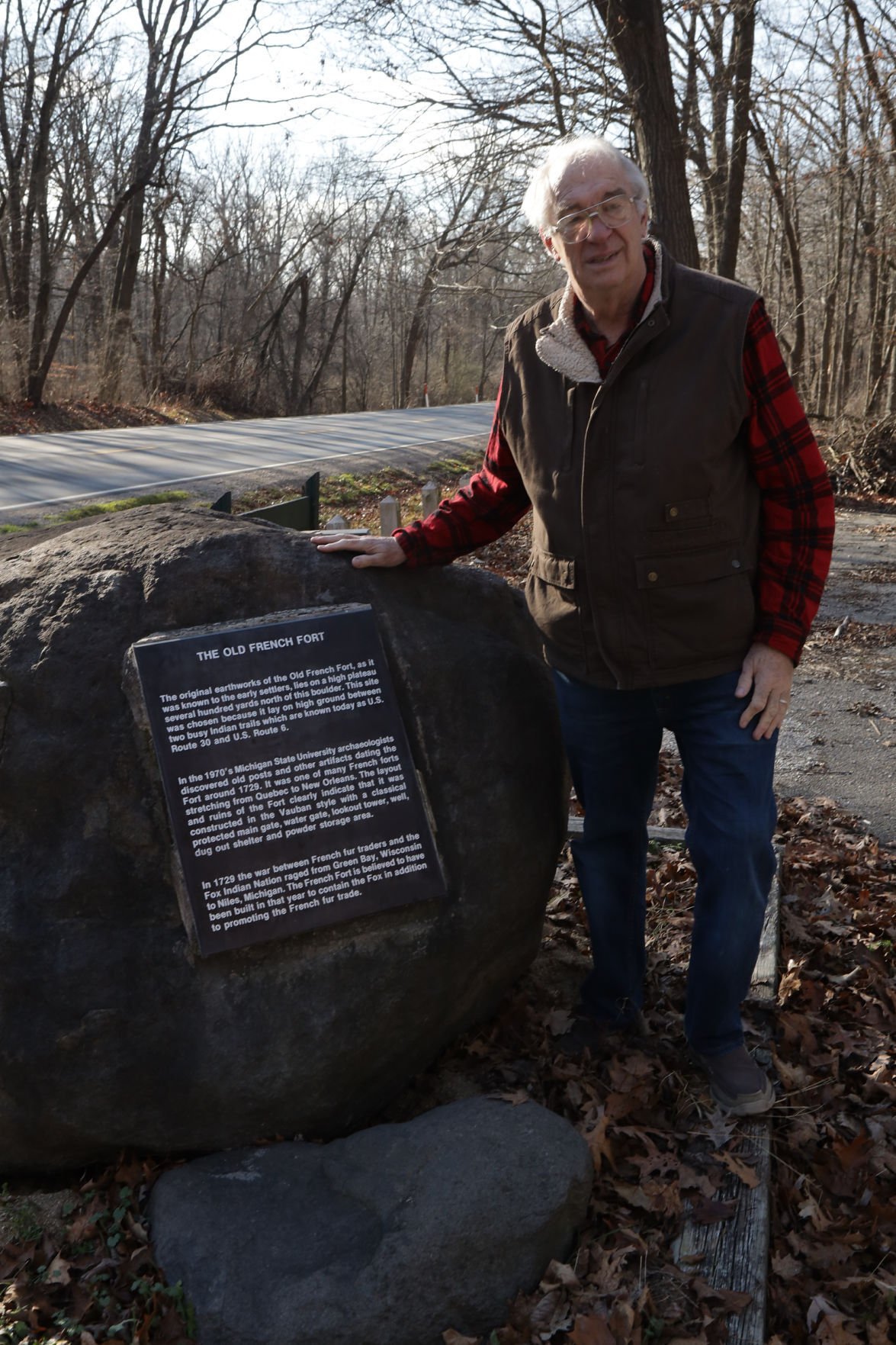 Historian David Rubner shows the location of what is known as the Old French Fort in New Lenox Township. 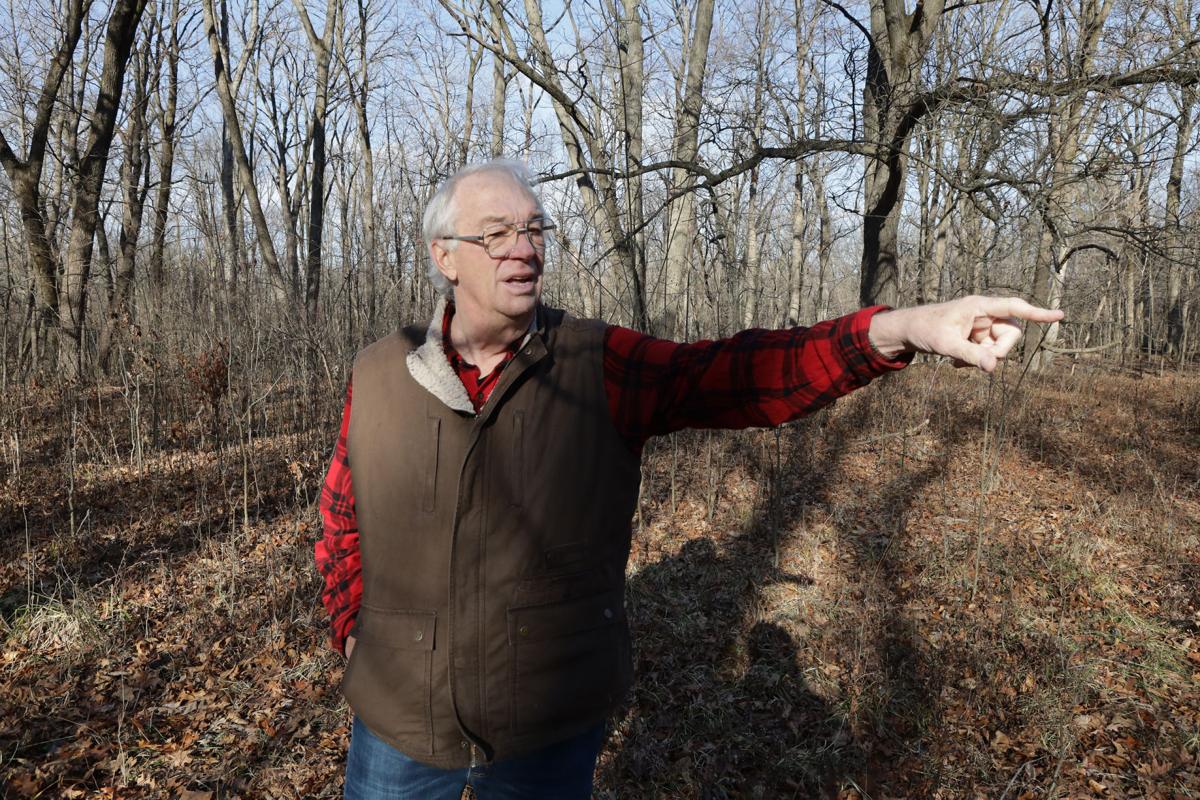 Historian David Rubner shows the location of the fort that's come to be known as a French outpost. 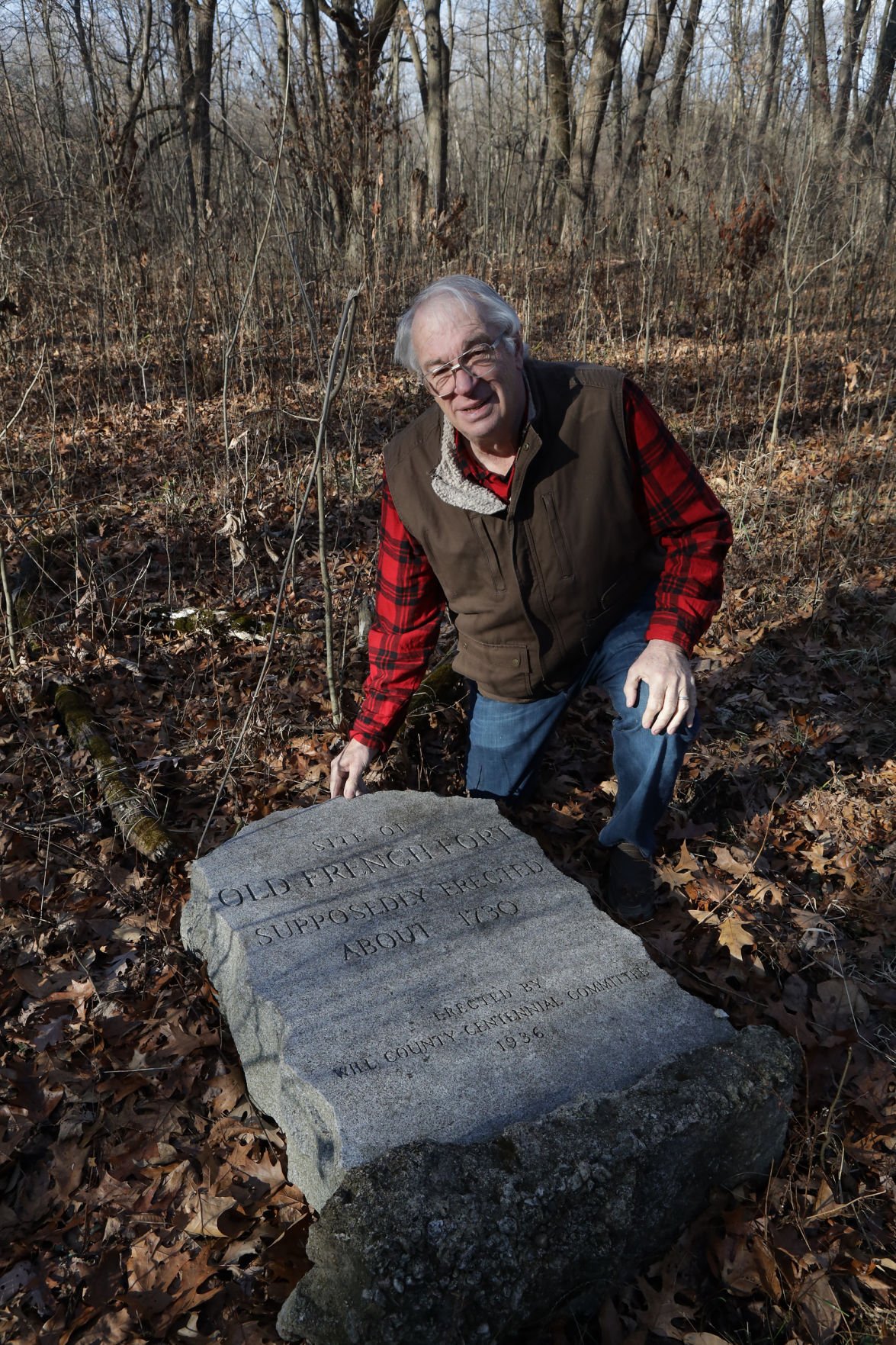 Historian David Rubner shows the site marker of the fort, which has toppled over. 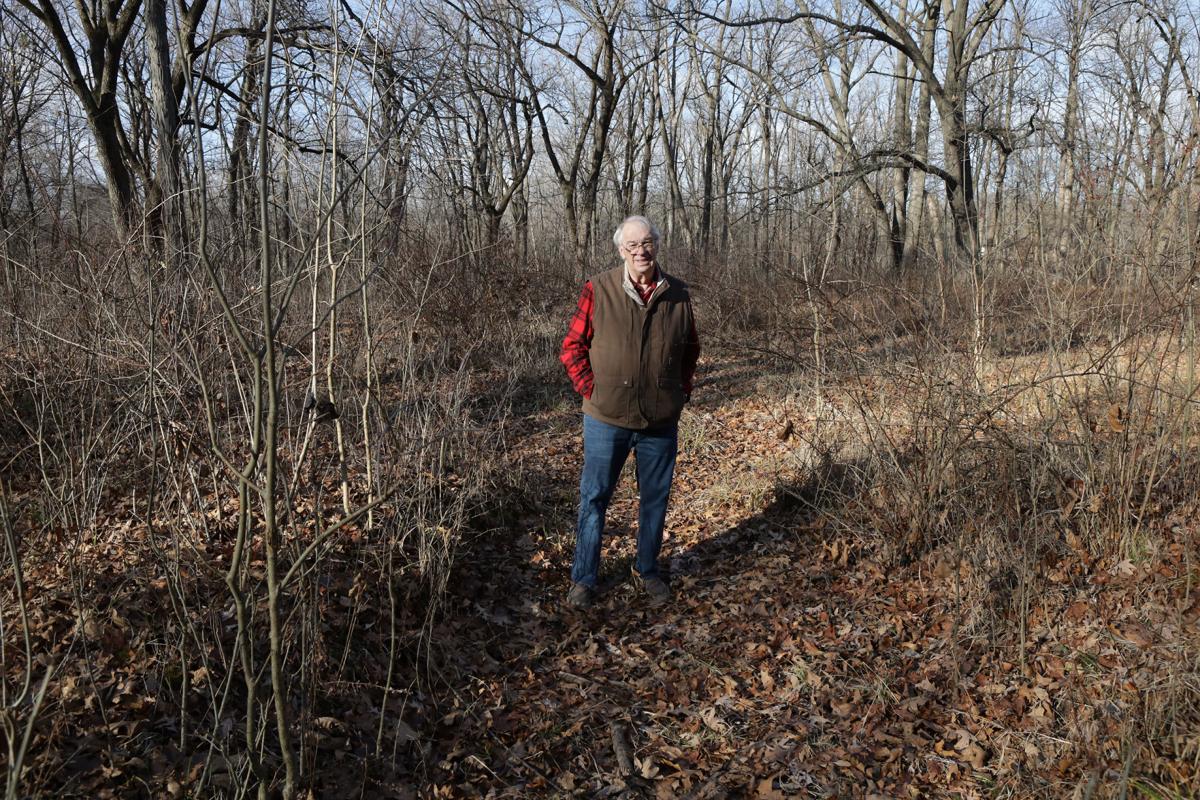 Historian David Rubner shows the mound in Higinbotham Woods where the fort once stood. 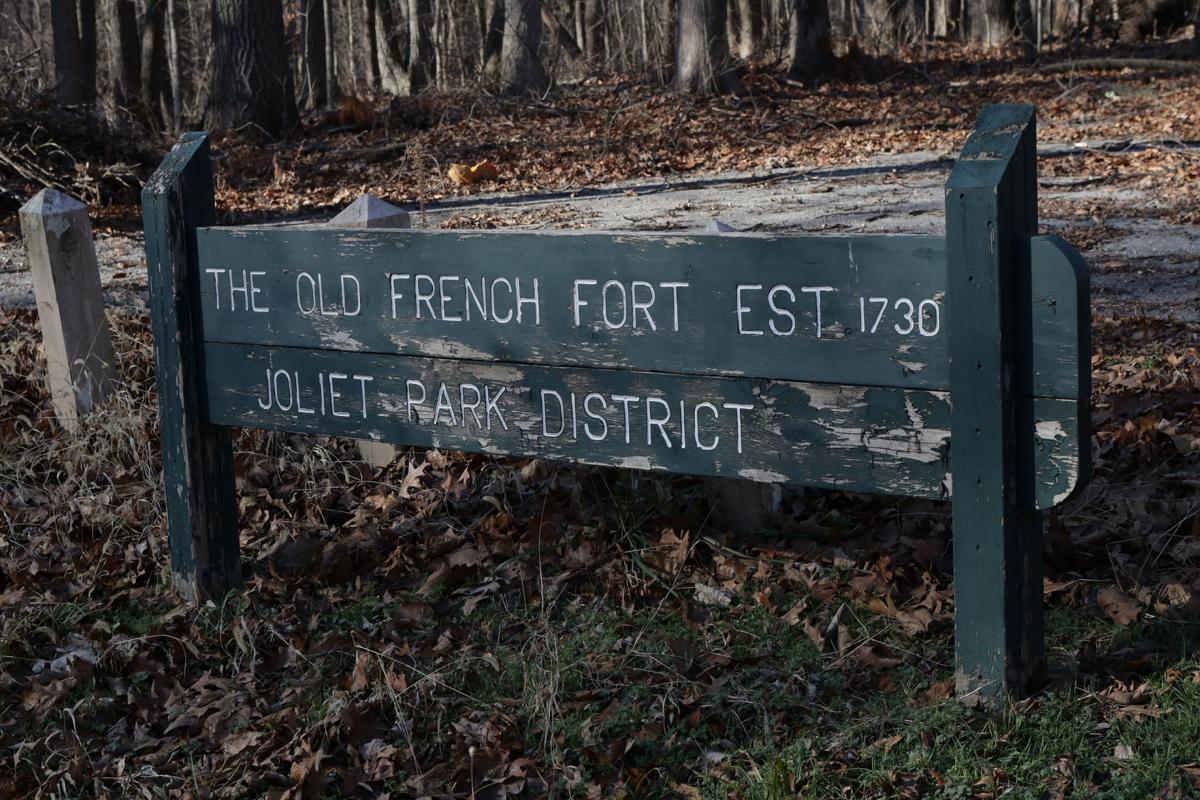 A sign marks the entrance tp the Old French Fort. 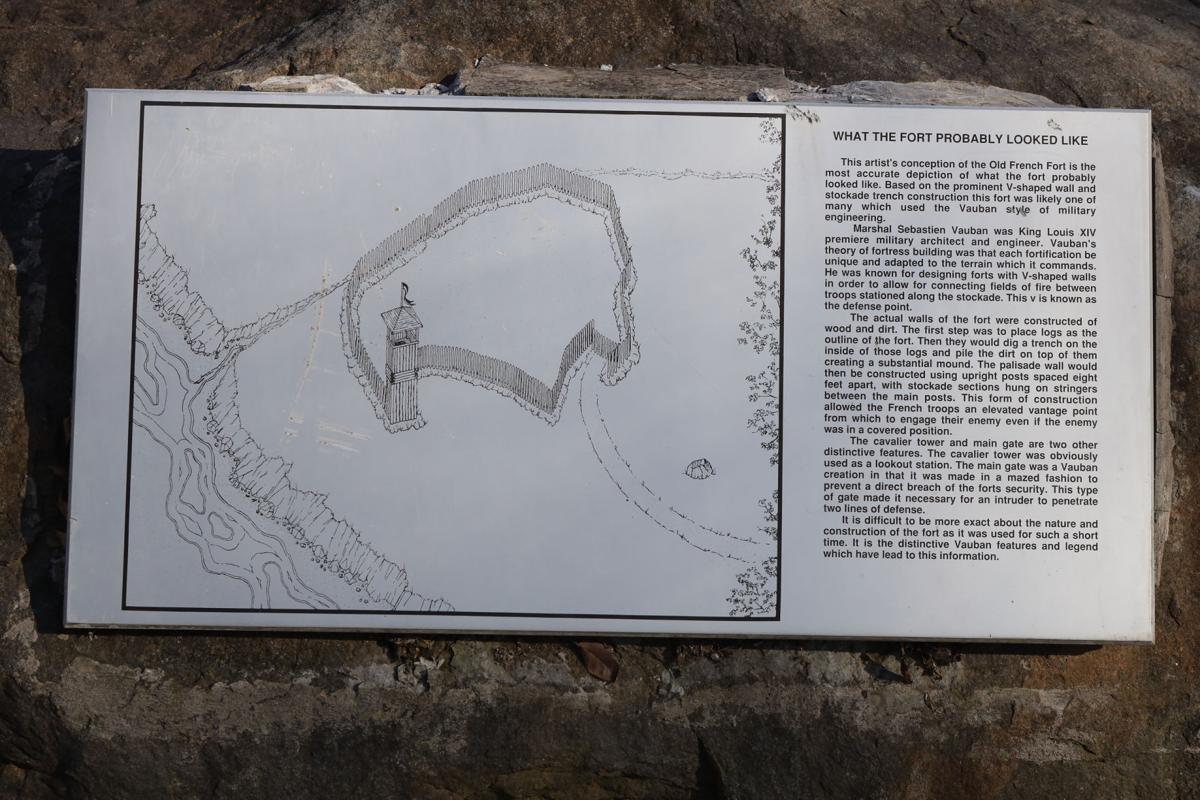 Historians and researchers say the site predates the French in the area and it probably wasn't a fort. 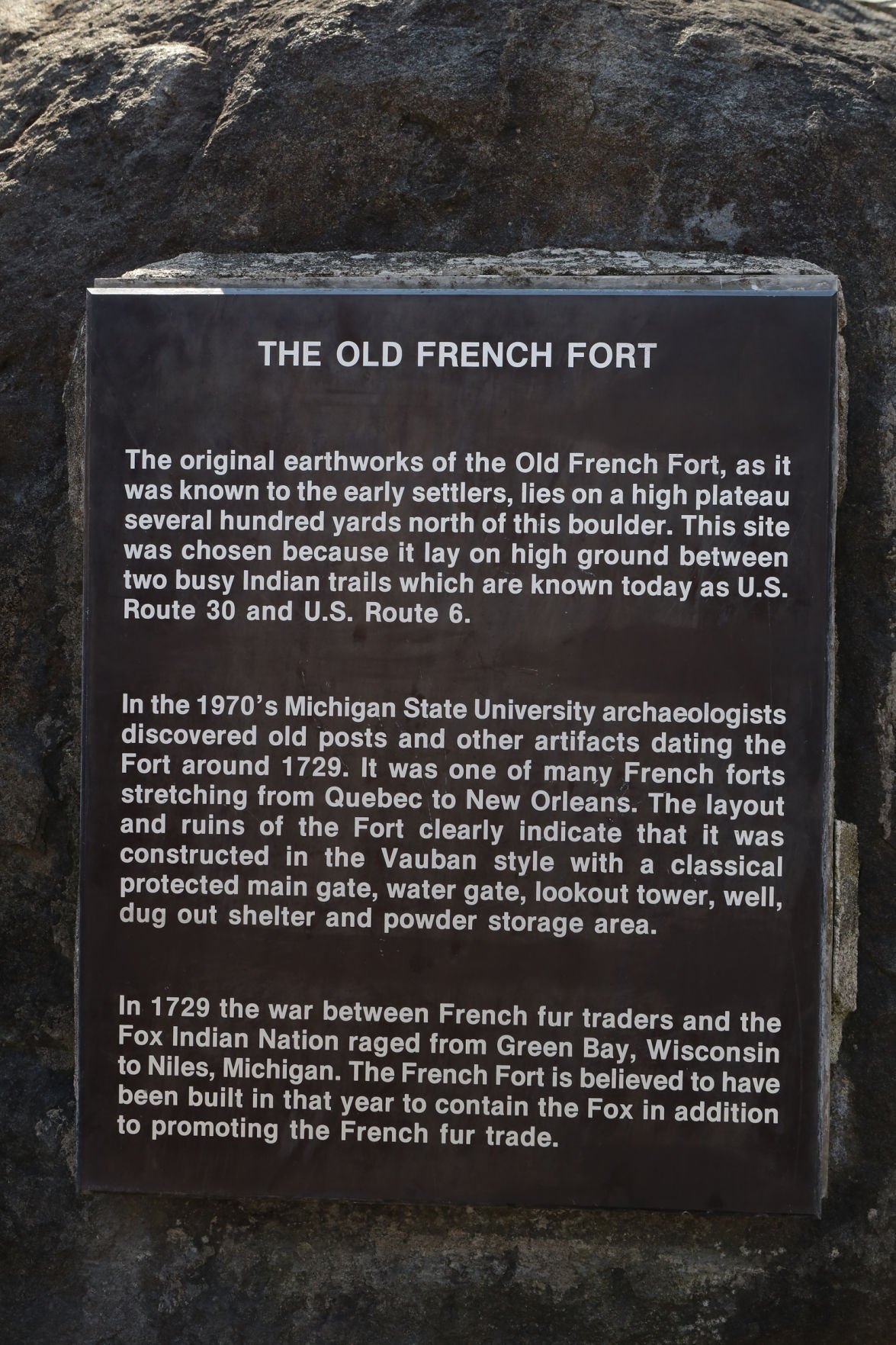 A sign tells the lore of the Old French Fort. 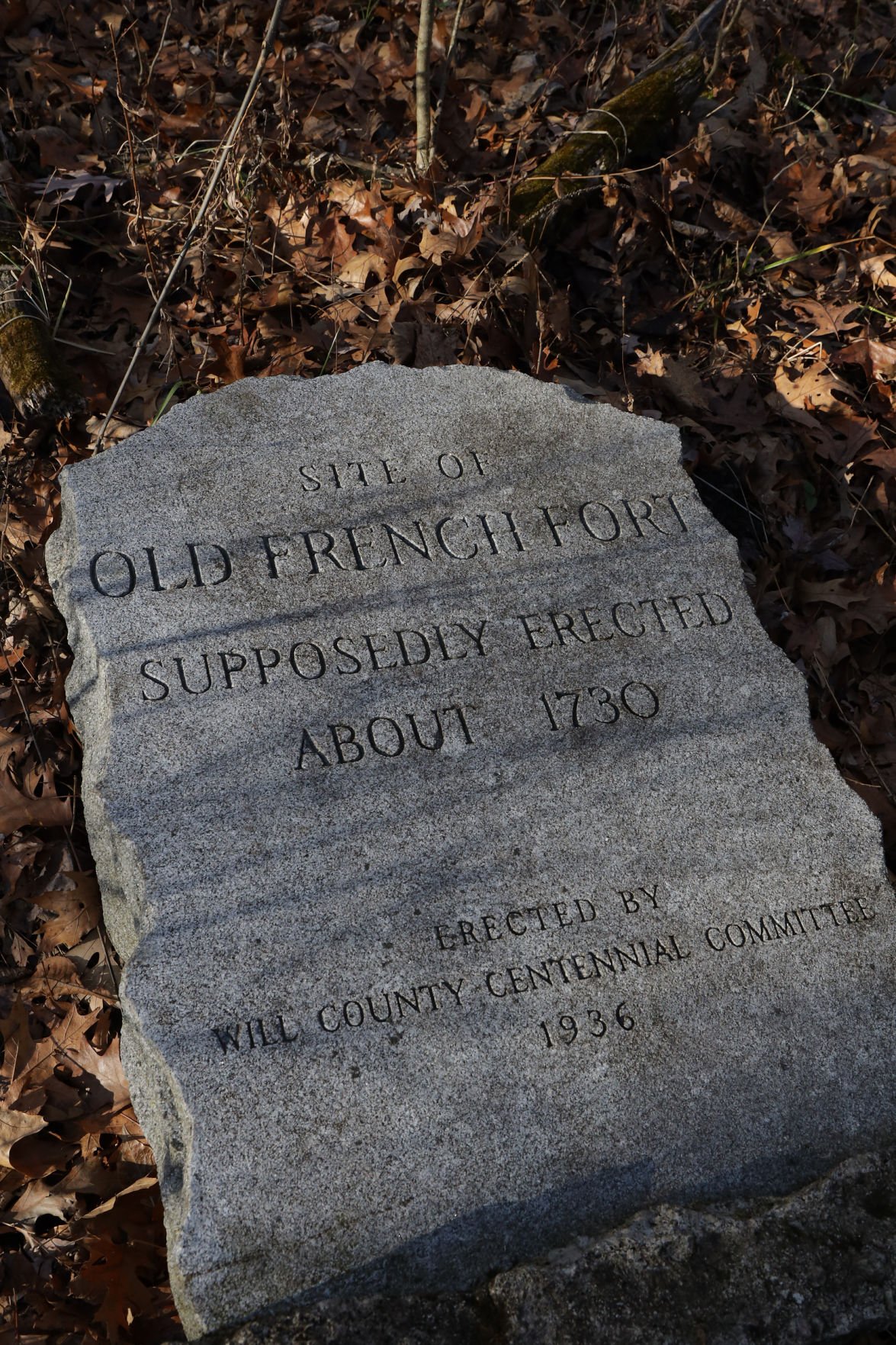 The site marker of the Old French Fort in Lew Lenox has been toppled.

Time travel is possible through the study of history, and sometimes it results in unexpected destinations.

The New Lenox Area Historical Society tells of a fort that once stood in the region, believed to have been built in the 1730s between the Native American trails that became today’s U.S. Highways 6 and 30.

But the fort's existence is about all that can be agreed upon, so Lori Lindberg, chairwoman of the New Lenox Area Historical Society, turned the dialog over to David Rubner, a researcher and author of “about 25 books or booklets” on the area’s history.

“I’ve always been interested in history — in what came before — since I was a little kid and went to the library and looked stuff up,” Rubner said. “I have a degree in geology, which, I guess, is Earth history.”

He and his wife have lived in the area for about 50 years. It was about six years ago that his research led him to the historical society. “Something to do with one-room schools,” he said. “My wife went to one-room schools, and I went looking for information about one-room schools in this area.”

The New Lenox Area Historical Society hosts “Spend a Day in a One-Room Schoolhouse” events for students to experience the days of yore at the Schmuhl School, a one-room schoolhouse built in 1932. When its original site was sold for development, the historical society bought the building to turn it into a museum, moving it to 20733 S. Schoolhouse Rd. in 2000.

Though the schoolhouse survives, a replica of what is known as the old French fort is long gone. “There’s nothing there now,” Rubner said of the site in Higinbotham Woods along Francis Road, east of Gougar Road. “I even have a hard time convincing myself that there was. I guess that back in the ’70s people were going and pulling out wood and burning it. That was before my time (with the historical society).

“The idea that it was a French fort came from local people,” Rubner said, questioning the heritage of the structure. “They didn’t have any information from French archives or anything.”

He said that in 1917, when the U.S. entered World War I, the heavily wooded land was clear cut to provide wood to the military. The land later was sold to Joliet. “Joliet had so much land, they set up a park district to run it. They wanted a botanic garden, a conservatory and an equerry for horses. Then they had this mound and thought ‘We’ve got a French fort.’ ”

James Ferriss, a politician and owner/editor of the Joliet News (and amateur conchologist, whose digging for shells was as close as he got to archeological training), studied the site, Rubner said. “He identified what he said was a well, a magazine, shelter — the opening was ‘a tower.’ He also found a lot of arrowheads, but he gave them no credence.

“I’m pretty convinced there’s nothing in the French records, in Jesuit records, to say there was a fort here,” he said. “French voyageurs, (Louis) Jolliet and (Jesuit Father Jacques) Marquette, they were a thousand miles from Quebec, and they were looking for China. They’d follow a waterway, and if the river went the wrong way for too long, they’d say, ‘This isn’t it, and go back.’ This isn’t near a waterway. There’s a creek, but you couldn’t float a canoe in it. It’s not too far from the Sauk Trail, which was a big, well-known overland route from the Mississippi to Detroit.”

Rubner acknowledges that it's possible a French fort stood on the site but there's not enough quality evidence. Instead, he said the site — a low earthen mound surrounding an acre about 150 yards into the woods from the Francis Road parking lot — dates farther back than that.

“I’ll tell you. It’s possible, but there hasn’t been enough quality investigation,” Rubner said. He said that he relies on a 1994 article by archeologist Douglas Kullen that appeared in the Midcontinental Journal of Archaeology, “The Comstock Trace: A Huber Phase Earthwork and Habitation Site Near Joliet, Will County, Illinois,” which “determined conclusively that the site dates to the late prehistoric/protohistoric Huber phase, rather than to the French Colonial period.” The report said that palisades, rather than being French walls, were part of an enclosure for the opening that, rather than a French tower, was a ceremonial site.

In checking the possibility of there’s a French connection, a call to the U.S. Jesuit archives in St. Louis found that its records date only to the early 1800s, and Jesuit archivists in Rome said such a search through old records could take years, and recommended contacting scholars specializing in French colonial America.

One,  former Illinois State University professor Carl J. Ekberg, author of the award-winning “Colonial Ste. Genevieve and French Roots in the Illinois Country: The Mississippi Frontier in Colonial Times,” is the recognized expert on the French in colonial Illinois.

“I have never seen any evidence in ... maps about any such fort,” Ekberg said in an email.

The archeologist who wrote the 1994 article about the site, Kullen, remembered examining it and is convinced that the site is protohistoric, “which takes into account the span of time in which the area was receiving European trade goods, but when there was no written record that the tribe had made contact with Europeans. The time from about 1500 into the 1600s, before French explorers arrived here,” he said.

So though the “Old French Fort” is old, it is neither French, nor a fort, but who knows what might be waiting, long hidden, in that aging archive in Rome?

68% of people have never completed a New Year's resolution

How to make sustainable style a new goal

How to make sustainable style a new goal

Ditch these supplements to be healthier this year

Ditch these supplements to be healthier this year

How to use space heaters safely this winter

How to use space heaters safely this winter

After a year's hiatus, Homer Fest set to return with a bang for town's 20th anniversary

HomerFest, Homer Glen's annual celebration is scheduled for June 24-27 at Heritage Park, and organizers are hoping by then, it will be safe to host the event canceled in 2020.

With Tinley Park Television, a municipal TV station and the Tinley TV YouTube channel, the village has been providing localized news and entertainment to the community for almost two decades.

A pedestrian bridge over Interstate 55 links two Forest Preserve District of Will County trails to ease use by walkers, runners and bicyclists.

Information is posted at the entrance to what is known as the Old French Fort.

Historian David Rubner shows the location of what is known as the Old French Fort in New Lenox Township.

Historian David Rubner shows the location of the fort that's come to be known as a French outpost.

Historian David Rubner shows the site marker of the fort, which has toppled over.

Historian David Rubner shows the mound in Higinbotham Woods where the fort once stood.

A sign marks the entrance tp the Old French Fort.

Historians and researchers say the site predates the French in the area and it probably wasn't a fort.

A sign tells the lore of the Old French Fort.

The site marker of the Old French Fort in Lew Lenox has been toppled.