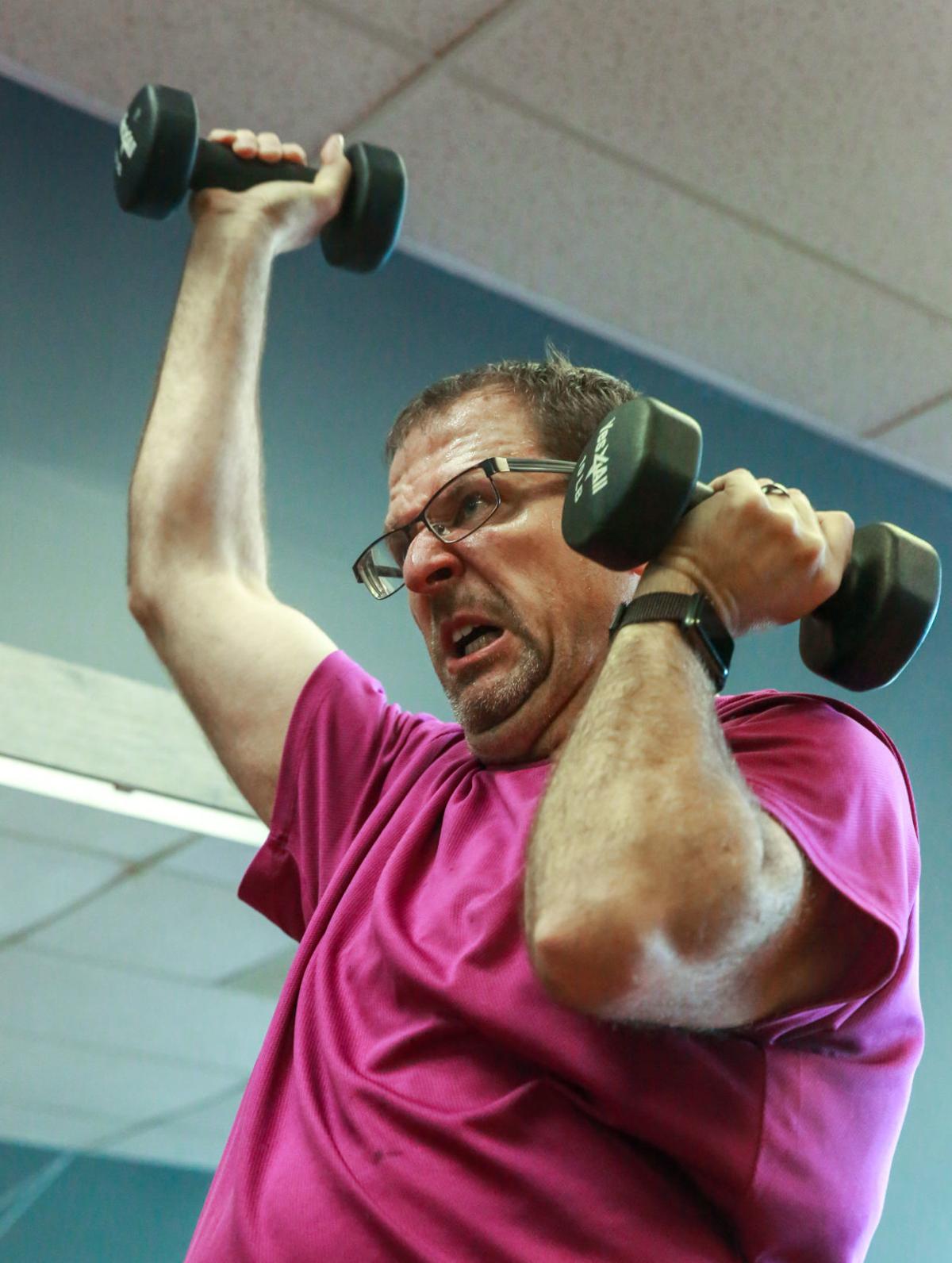 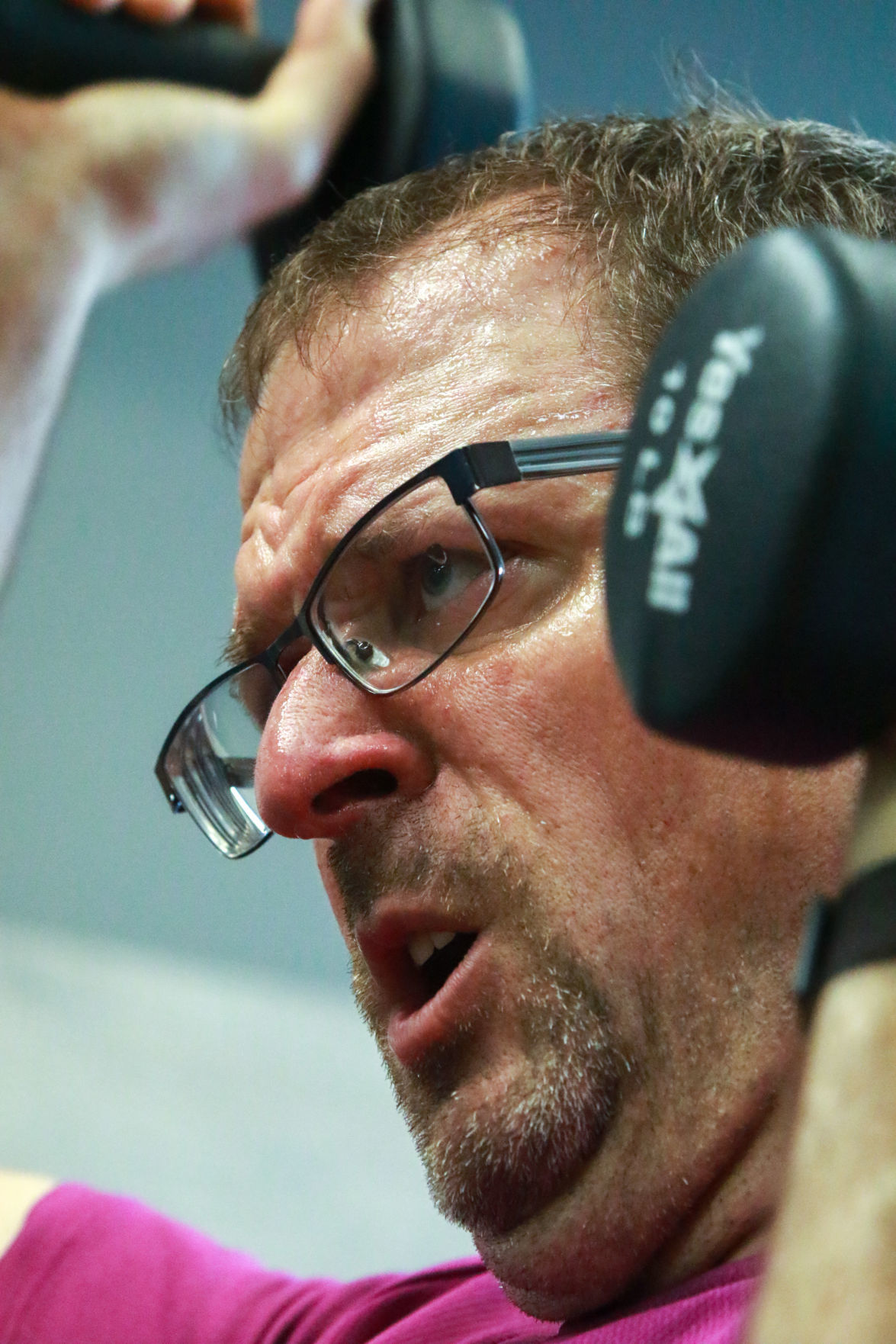 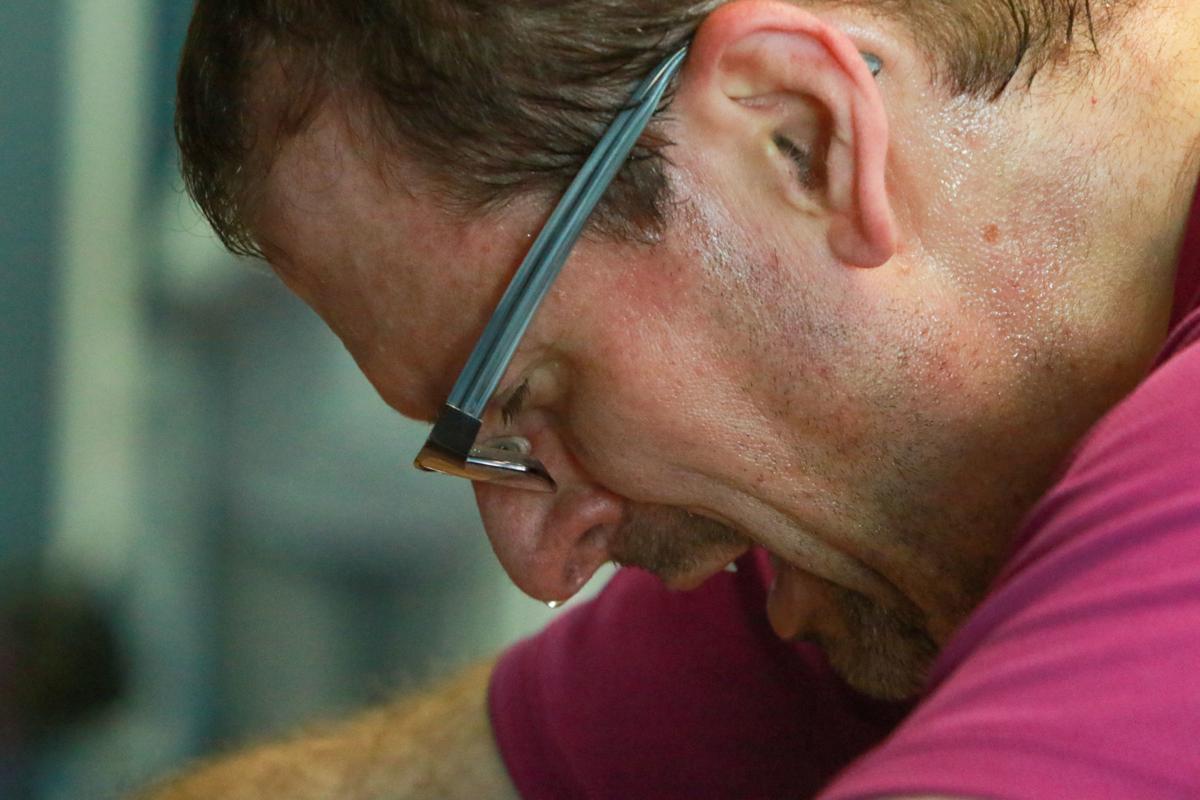 With sweat dripping from his face, Steve Clark takes a break during Tabata class at Kaos Fitness in Merrillville Tuesday. 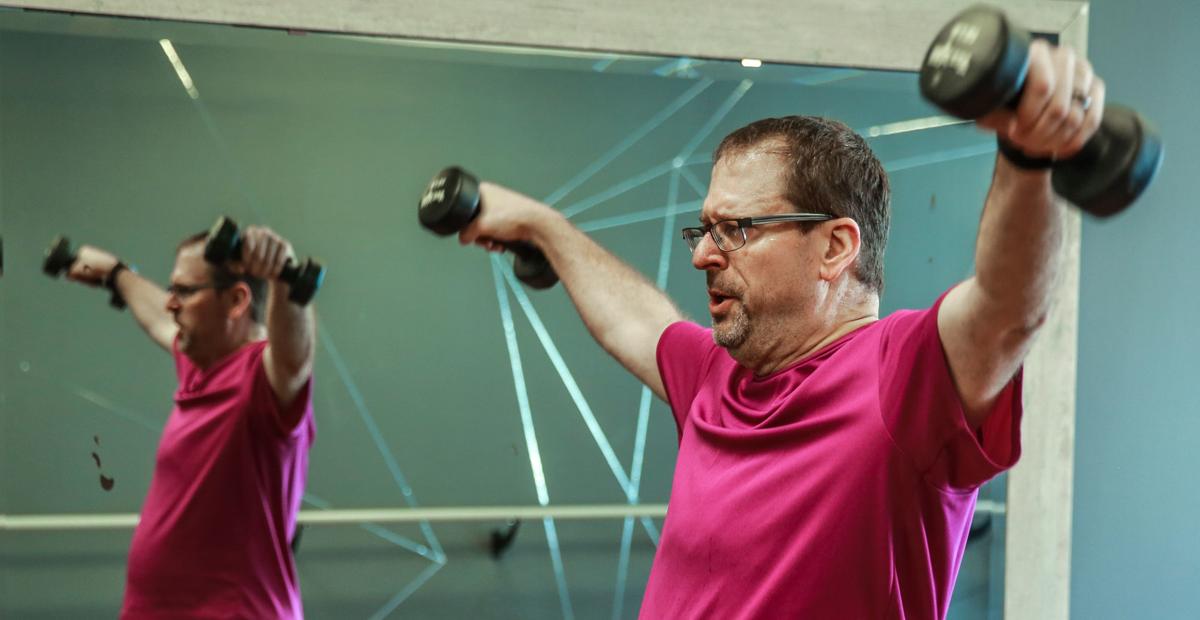 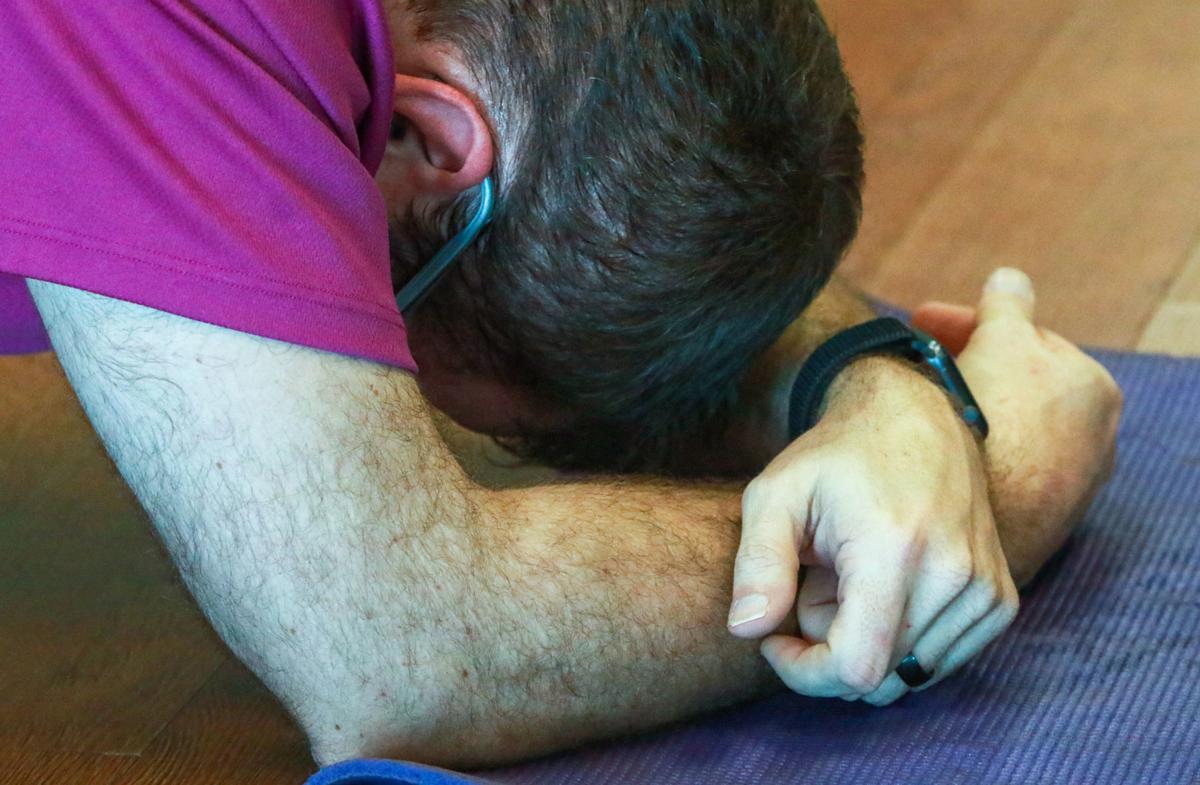 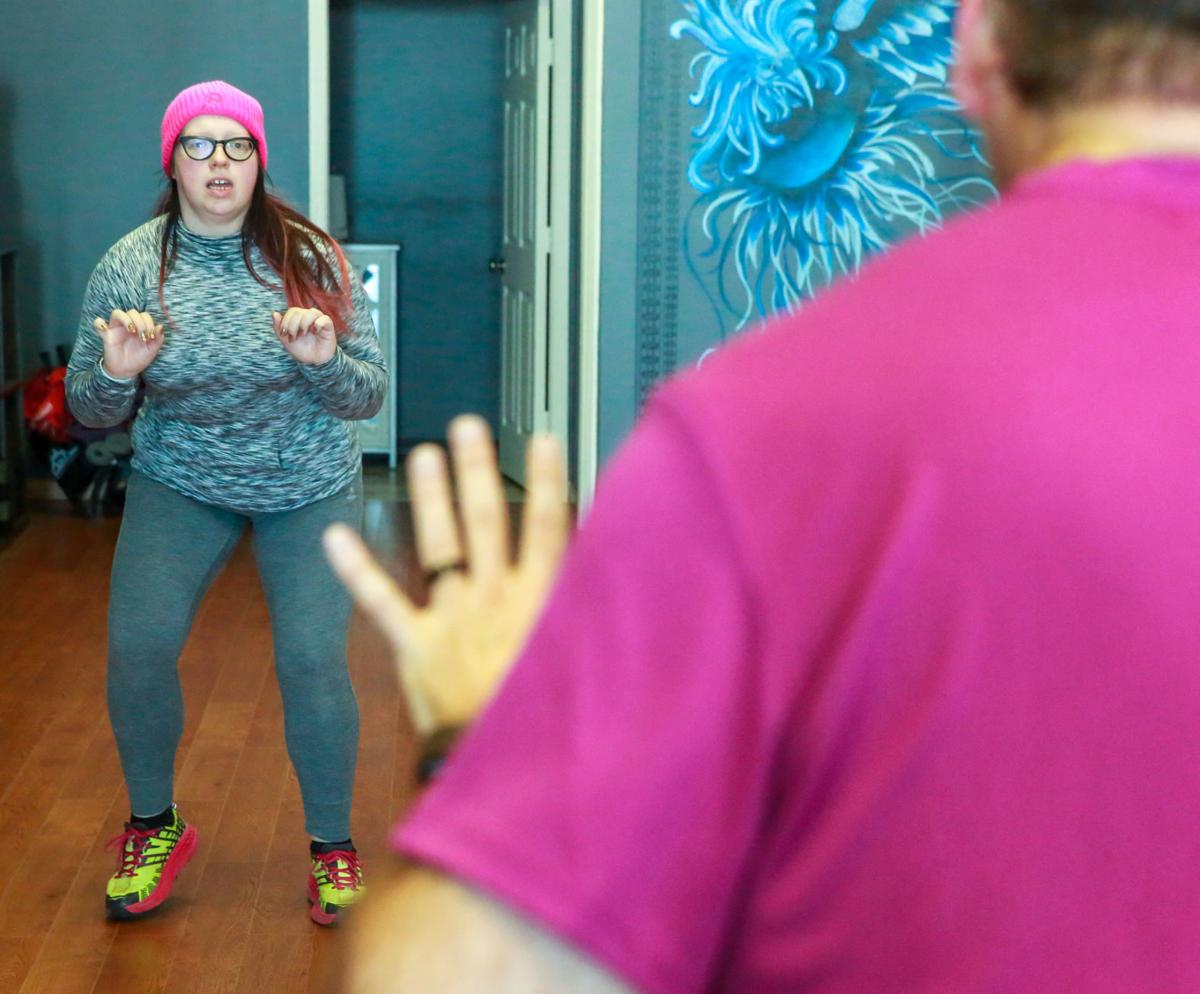 With instructor Erin Higy leading the class, Steve Clark does the football drill during Tabata class at Kaos Fitness in Merrillville Tuesday. 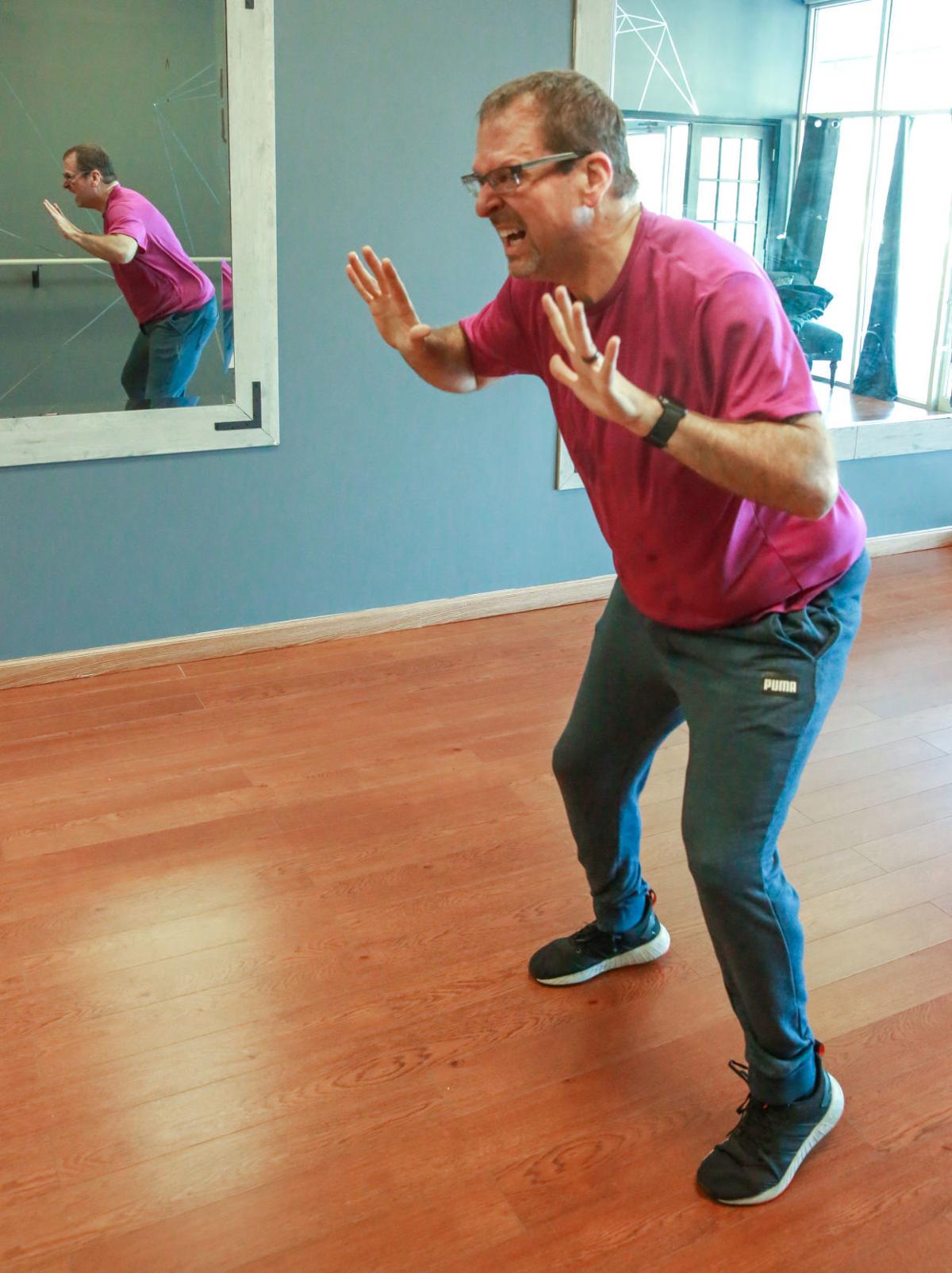 Steve Clark does the football drill during Tabata class at Kaos Fitness in Merrillville Tuesday. 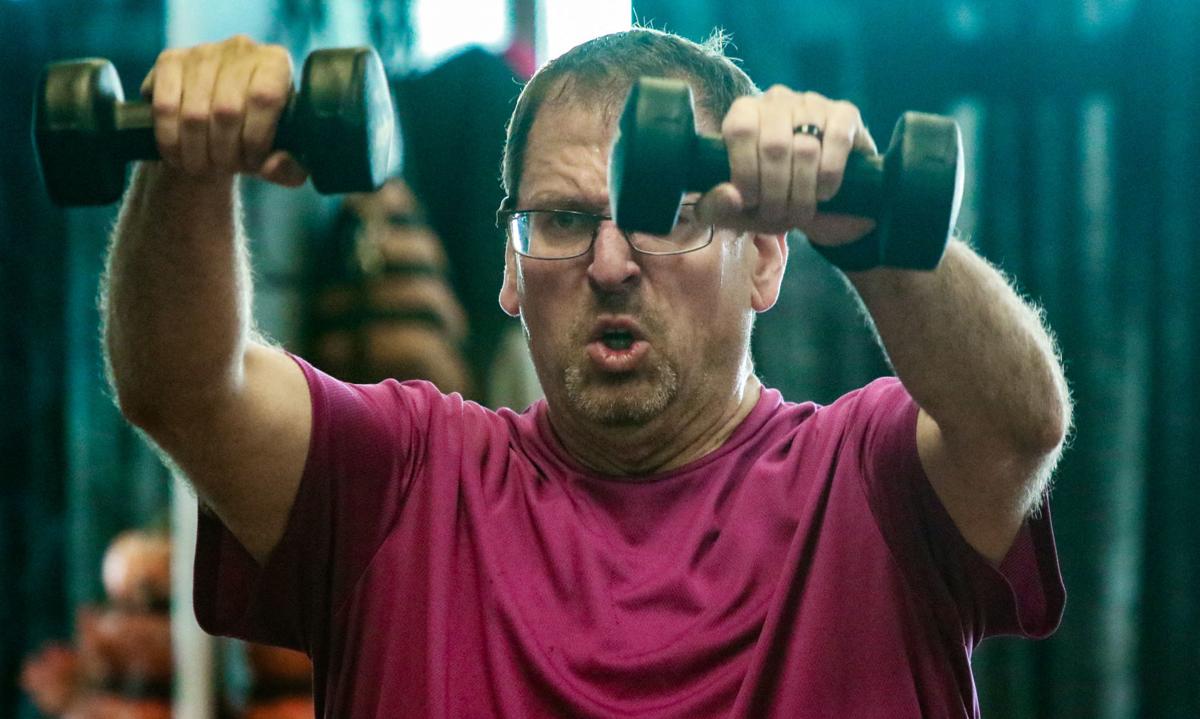 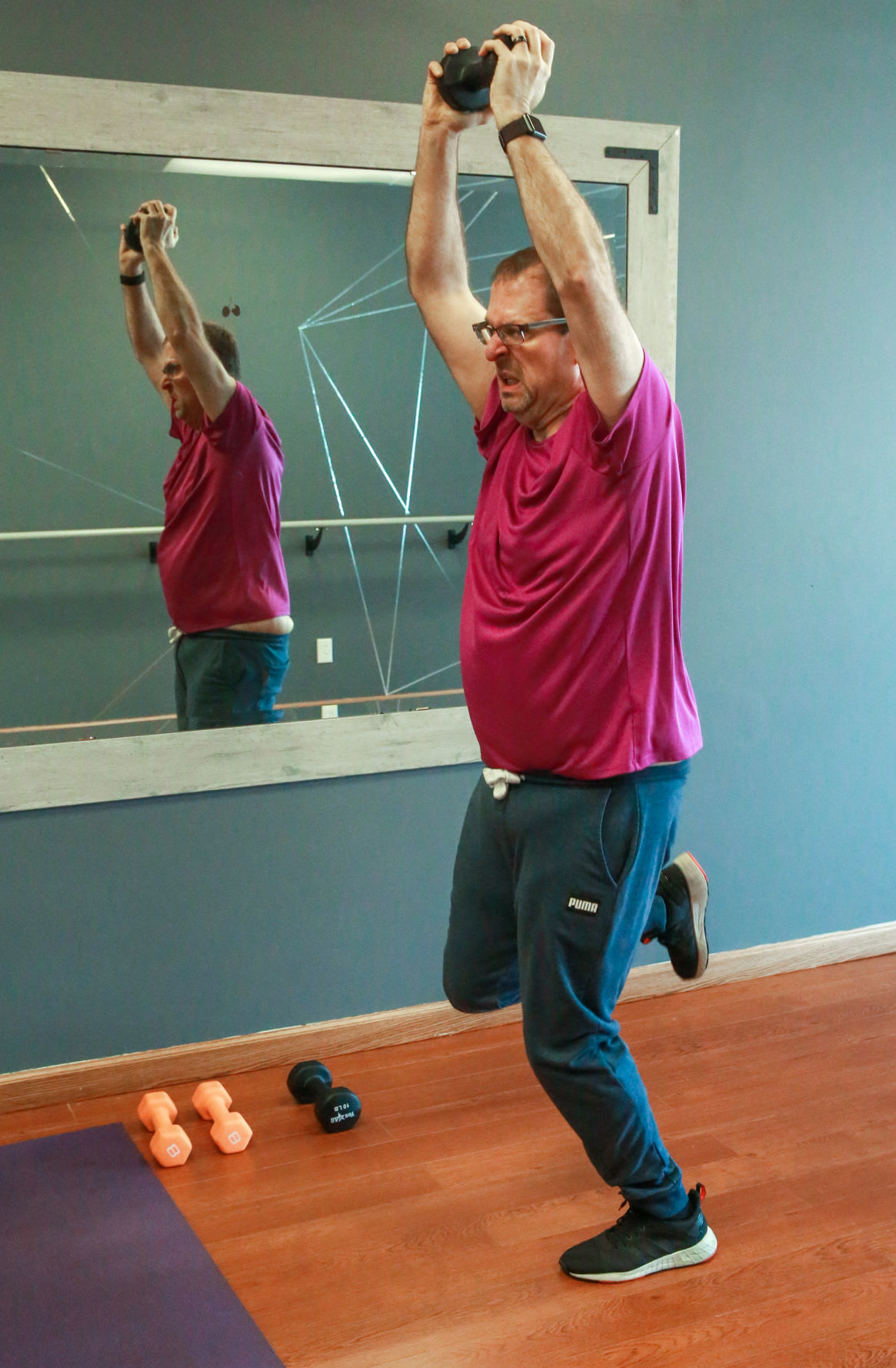 Steve Clark had been looking forward to going to a Chicago Bears game at Soldier Field for weeks.

It was a memorable day, Clark recalled, but for all the wrong reasons.

Instead of enjoying the game, the now 47-year-old Merrillville resident sat there, worried that he might not be able to get back to the car.

He realized everything he had struggled with that day was normal, everyday tasks - walking, climbing stairs and even sitting.

It was the straw that broke the camel’s back, he said.

“I realized how far I had let myself go, and I wanted to be around to see my daughter grow up,” he said.

Clark is participating in The Times’ Lose 19 in ‘19 weight-loss contest. At the beginning of this year, he was among those who weighed in at local gyms to start their journey toward weight loss in 2019, with the goal of losing at least 19 pounds.

“I started trying to improve my health about a year and a half ago,” Clark said. “I had been really focused on my training and I had success, but after Christmas last year, I lost motivation and began putting weight back on.”

His trainer, Erin Higy, suggested The Times weight loss contest as a motivator for 2019.

Clark, a product specialist at American Sale in Merrillville, began his journey at 423 pounds. This month, the scale showed he has lost nearly 200 pounds.

Though the Bears game served as the final straw, as a father to his 2-year-old daughter, Lucy, he knew he had to make positive changes.

“I’ve always wanted to be a dad, but I was so big I really couldn’t play with her or even get down on the floor,” Clark said.

He began the Weight Watchers program with his wife, Nicole, who has lost 60 pounds as well. Clark also began working out with his trainer three times per week, as well as 30 minutes of cardio the rest of the week at the Southlake Family YMCA.

He also takes Lucy to the pool or park where they have active playtime.

Despite his success, Clark says he still struggles with compulsive eating, especially late at night.

“My car still seems to want to turn into the McDonalds drive-thru,” he said. “I’ve learned to forgive myself more. I try and remember I’m not trying to lose weight. I’m building the skills I need to make better choices.”

Clark recommends setting small manageable goals, and focusing on goals that go beyond the number on the scale.

“I have a great trainer, Erin at Kaos Fitness, who met me where I was at and started me at my level,” he said. “I couldn’t even get off the floor when I started. She helped me take one small step at a time. Now I’m just completing an advanced boot camp.”

His goal is to weigh 210 pounds, play tennis again and pass what he has learned along his journey to others.

“I’d like to help other people who need to lose weight for their future,” Clark said.

Nancy Simko had done 5Ks before, but they weren't competitive.

A few years ago, Steve Clark had a goal of getting down to 250 pounds. He weighed in as high as 423 just last September.

For the first 4.5 months of this year, Andy Tylka worked out four days a week, tracked his meals, cooked overnight oatmeal for breakfast, read…

GOSHEN, Ind. — Nearly 1,200 surgical patients may have been exposed to hepatitis, HIV and other infectious diseases due to a sterilization fai…

Want to vote in person? Here's how to judge the risk

Want to vote in person? Here's how to judge the risk

Fauci: The idea of 200K US deaths in sobering and stunning

Fauci: The idea of 200K US deaths in sobering and stunning

With sweat dripping from his face, Steve Clark takes a break during Tabata class at Kaos Fitness in Merrillville Tuesday.

With instructor Erin Higy leading the class, Steve Clark does the football drill during Tabata class at Kaos Fitness in Merrillville Tuesday.

Steve Clark does the football drill during Tabata class at Kaos Fitness in Merrillville Tuesday.