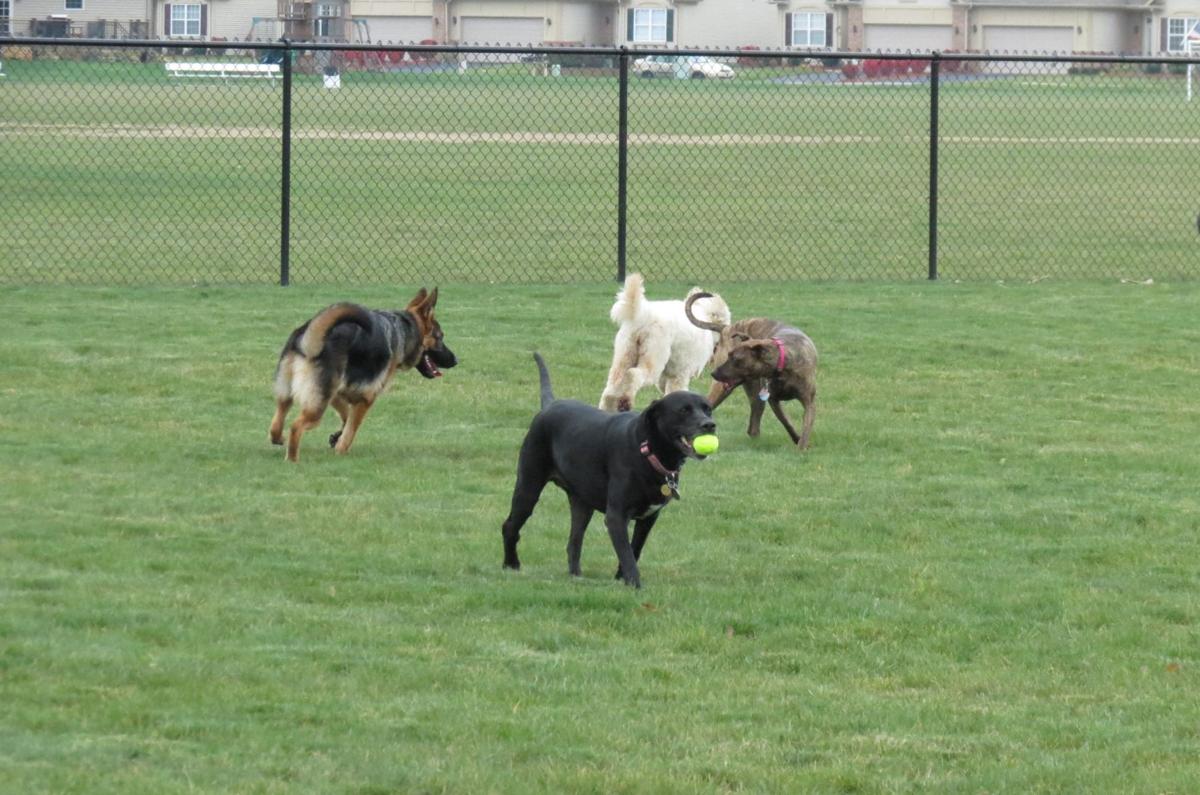 Divided into sections for big and small dogs, each area has benches, dog waste stations, doggie water fountains and shelters. 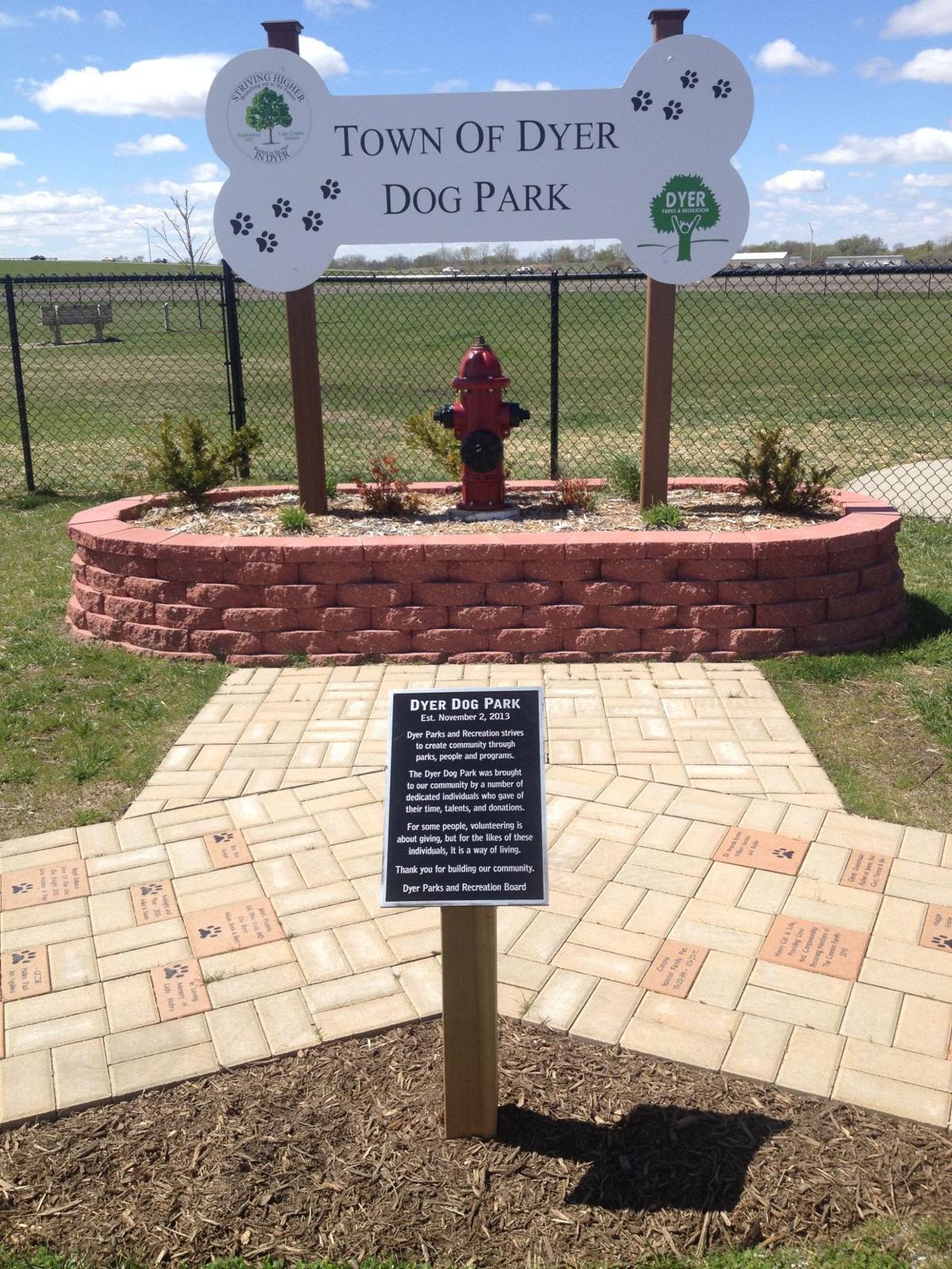 One of the most popular of the new additions to Central Park is its 3-acre Dyer Dog Park.

With 22 parks ranging in size and amenities, Dyer offers myriad options for recreation.

“Overall, we’re trying to provide services and opportunities for Dyer residents to be able to get outside and enjoy,” says Michael O’Shea, Dyer’s director of Parks and Recreation. “Our parks give people the chance to take their kids to a place to play. We have playgrounds, walking paths and lots of programs and activities such as our summer concerts.”

Continuing to improve and provide more services is one of the goals for Dyer’s Parks and Recreation Department, says O’Shea. “We just finished a community survey for updating our five-year master plan,” he says. “We received a lot of good information of what people like about our parks and what they want.”

According to the survey and comments garnered at public meetings, Dyer residents value both playgrounds and trails for biking, running and walking.

“Those were the two major themes and the most important to our residents,” O’Shea says.

Northgate and Pheasant Hills parks are among the most popular. “Pheasant Hills has a skate park, which gets a lot of use, and Northgate is where the soccer teams play,” O’Shea says. “Most of our parks have playgrounds and open areas and five of our parks currently have walking trails. We recently added a bocce ball court at Elmer Miller Park and both Miller Park and Northgate have permanent bean bag courts.”

At 77 acres, Central Park is the largest, but when the land was first purchased it was mainly just an open field with only one tree. Using a grant from the Indiana Department of Natural Resources, Division of Forestry, 116 trees have been planted that will not only provide shade but help create a more arboretum-like landscape. The park’s master plan calls for more parking areas and additional sports fields.

Over the years, additions have been made to other parks in town. At historical Elmer Miller Park, a pedestrian pathway and bridge now cross Plum Creek connecting the park to the Plum Creek Center activity center, which is available for rent. Last year, evergreen trees were planted at Hearthstone Park. When erosion did away with part of a walking trail around what was a 7-acre pond at Pheasant Hills, new trails were added to either side of the pond which now encompasses 18 acres.

One of the most popular of the new additions to Central Park is its 3-acre Dyer Dog Park. Divided into sections for big and small dogs, each area has benches, dog waste stations, doggie water fountains and shelters. Open year-round from dawn to dusk, registration is required to use the park. And like much else, the Parks and Recreation department is working on upgrading the amenities.

“We have two pieces of agility equipment in the big dog area, including a pole they can jump over which can be raised or lowered,” O’Shea says. “In both the big and small dog areas we have rings for dogs to jump through. We’re looking at other equipment because we want to add more in upcoming seasons. Our goal is to keep making our parks better and better.”

In addition to the popular Dyer Dog Park, the town also offers businesses that will keep your four-legged family members healthy and happy.

A foul odor from your pet’s mouth could be an indication of gingivitis, says Molly Farrell, DVM, owner of the clinic, noting they offer ultrasonic cleaning and polishing, which smooths out the enamel to prevent tartar buildup. “This helps protect the heart, kidneys and liver from damage,” Farrell explains.

Dog owners know that bath time can be a wet mess, but “Our do-it-yourself dog wash has four tubs that can accommodate all dogs, including a large dog tub that’s big enough for Great Danes and all dogs over 100 pounds,” says Joey Quinn, who with his wife Tammy, owns Pet Supplies Plus in Dyer. “We provide the tubs, towels and shampoo. We also have heatless air dryers to help fluff up their coat. And we clean up afterwards.”

Other pet-centric offerings include frozen dog food dinners, which are based on the raw diet and can be defrosted in a few minutes. “The new hot thing is freeze-dried meals with veggies and fruit,” Quinn says.

Supporting pets in need is the goal of both Pets Supplies Plus and the Dyer Animal Clinic. “We work with Whiting Animal Control and have adjusted fees through their facility,” says Farrell, adding that they offer discounts to firefighters, police and senior citizens.

“We have adoption days with rescue groups and we have a drop box where people can donate food which goes to rescue groups like the Humane Society,” Quinn says. “We also partner with VIP Pet. They come in twice a month to examine pets, give them shots, ID tags and do microchipping. Dyer is a very pet-friendly town.”

Get a dose of adorable in your inbox

Receive local adoptable pets PLUS updates for pet lovers in your inbox every week!

KANSAS CITY, Kan. — A 12-year-old boy died Sunday on a Kansas water slide that is billed as the world’s largest, according to officials.

No matter the occasion or venue, there’s no doubt that Dyer knows how to throw a party. Thanks to a plethora of celebratory experts, there’s a…

Dyer’s Hometown Celebration is getting a makeover this year—not only has the date of the popular town social been moved up, its location has c…

For some people, fall represents a time to head back to the gym or the trainer or the exercise class after a summer away. Aside from the obvio…

Dyer Chamber of Commerce makes a difference in the community

Dyer’s Chamber of Commerce calls itself “The Small Chamber with the Big Heart.” A discussion with current president Denise Wiles and past pres…

DYER — More accessibility for those with disabilities, enhanced playgrounds and more walking paths.

Divided into sections for big and small dogs, each area has benches, dog waste stations, doggie water fountains and shelters.

One of the most popular of the new additions to Central Park is its 3-acre Dyer Dog Park.