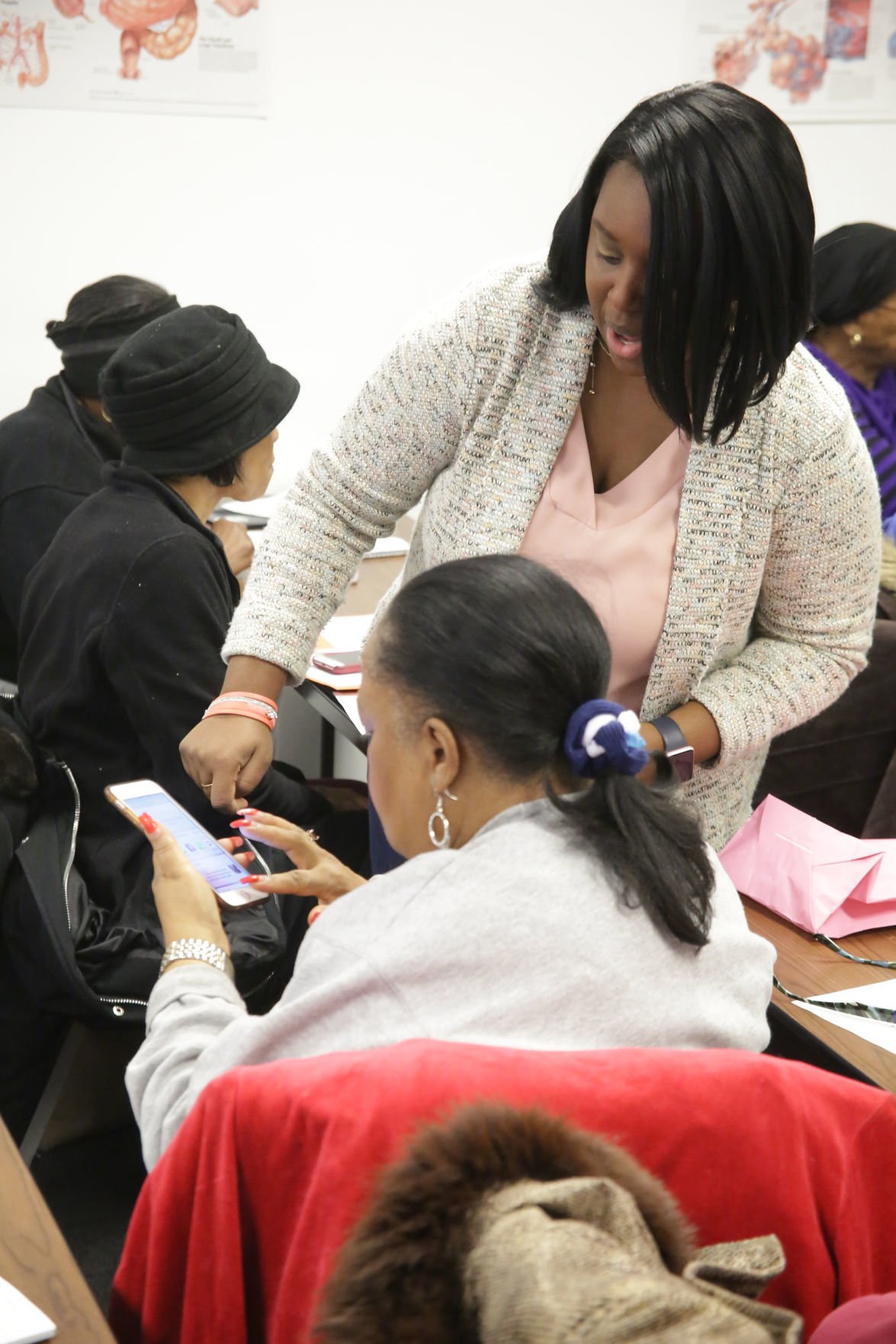 Instructor Brittany Taylor, top, shows Terry Wilkerson what's on her phone screen at a January class in Gary. Taylor, through her company I Tech Teach You, has made it her goal to teach technology to seniors in the Region. 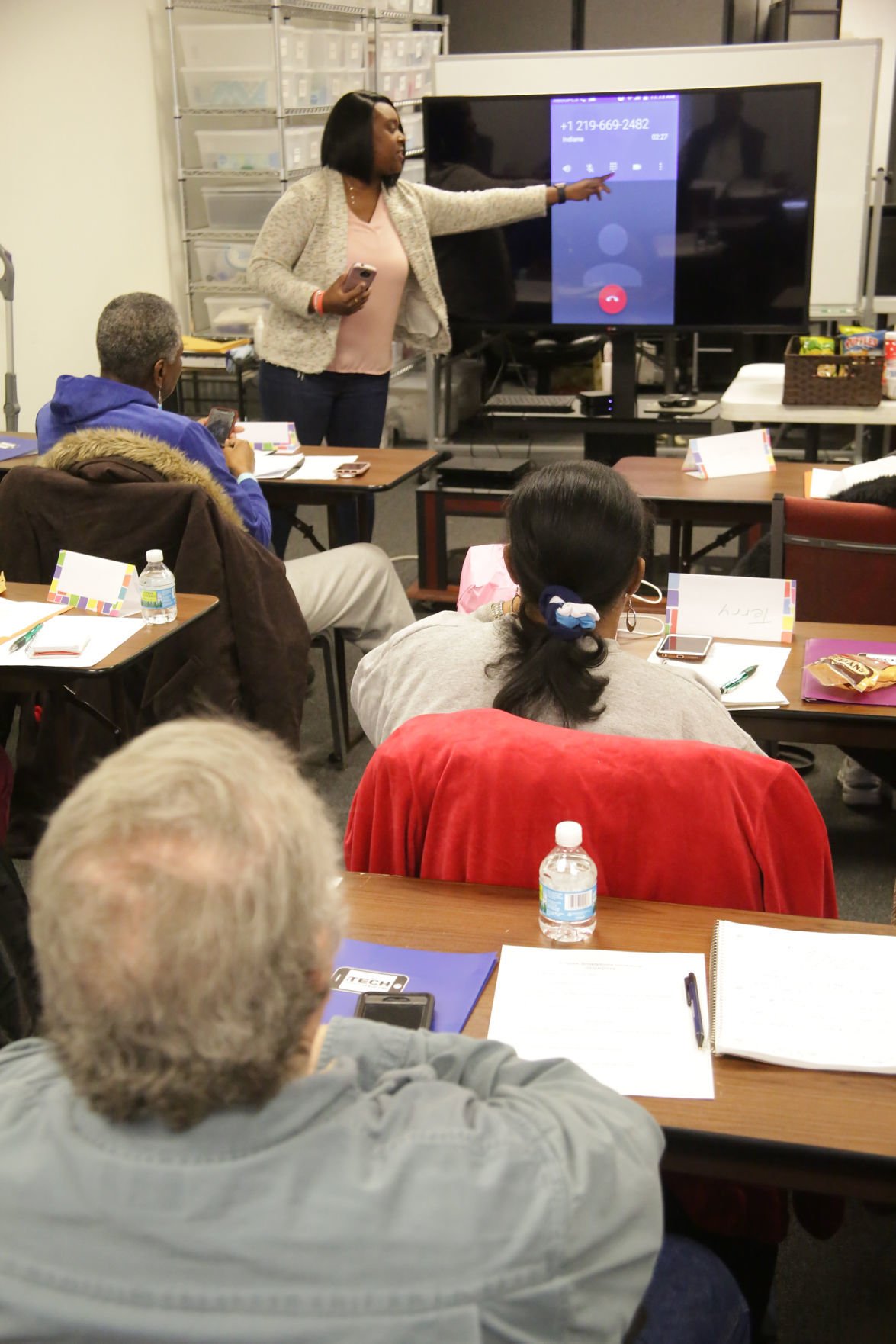 Instructor Brittany Taylor, top, discusses the interface of a smartphone screen at a January class in Gary teaching technology to senior citizens. 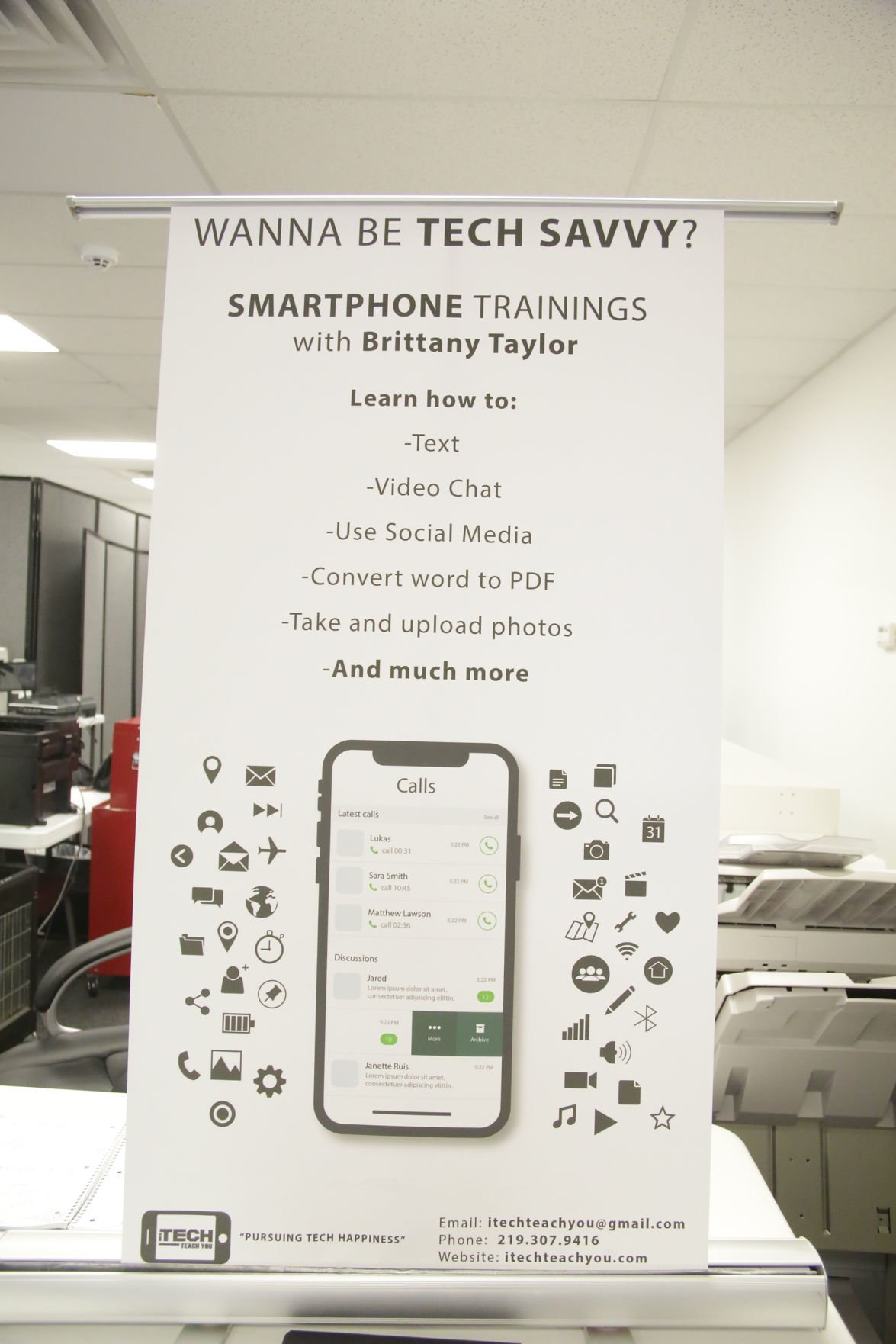 Brittany Taylor, through her company, I Tech Teach You, teaches technology to seniors in the Region. 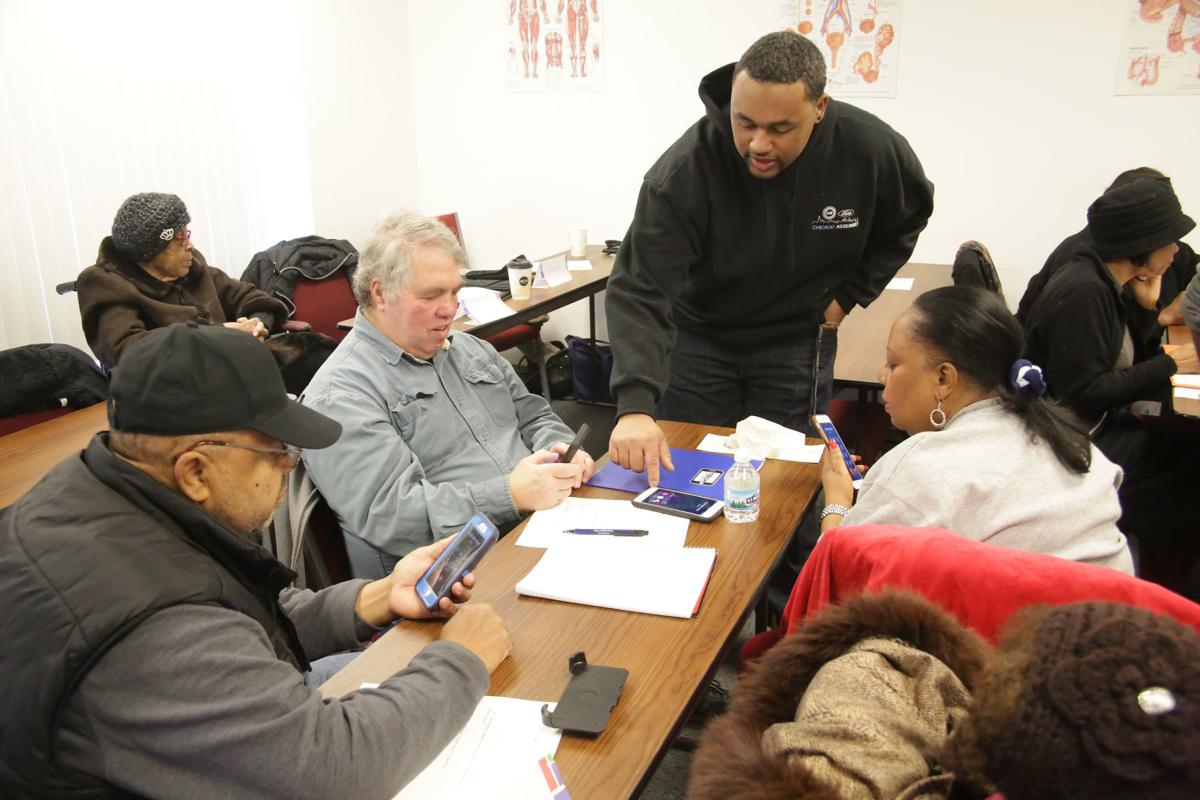 "Did you get that picture that Jackie posted on Facebook?

Taylor tapped on her phone.

"I've got another call."

"Hey, Jackie, what's going on? Who'd you see at the store? You saw Dee, what was he doing?"

"Dee's on the other line," said Taylor, a gregarious 32-year-old. "I merged the calls without even letting you know. Dee knows you talking about him and don't like you, anymore. I have to hang up now. I don't have time for this drama."

Taylor acted out this scenario in front of a classroom here full of about a dozen seniors, some in wheelchairs or using walkers. Her phone screen was mirrored on a big-screen TV.

She used the example of turmoil among friends to explain some of the many things you can do with a smartphone: texting someone a photo while talking to them on the phone, merging two calls into one.

The Merrillville woman runs a company called I Tech Teach You, which advises people — seniors, mostly — on how to use technology, from phones to laptops to WiFi. She offers classes across the Region, including at Oak Street Health in the Gary and Maria Reiner Center in Hobart.

Avoiding technology is really not an option nowadays. People need it to to shop, travel and communicate with loved ones.

"We're getting to a point when all these department stores are closing. If you want to go on vacation, all the plane tickets you have to get online," Taylor said. "I realized I was very passionate about the seniors and how behind they are for the times."

Taylor found out she had a niche for this while working at a local bank. She would help older customers download apps — banking now also is done largely online. Thanks to her knowledge, coupled with a heavy dose of patience, she gained a reputation for being the go-to person for technology questions, even among co-workers.

So she decided to make a business of it.

She founded I Tech Teach You with mentoring from the Indiana Small Business Development Center and grants for being a minority woman business owner.

I Tech Teach You classes

Brittany Taylor's next technology workshop starts from 11 a.m. to noon May 17 at Lil Lou's Barber College, 4853 Broadway in Gary. The class is eight weeks and ends July 5. The cost is $50.

The classes make participants feel like they're back in school, since it's designed like it, with homework, midterms and finals, even the crowning of a valedictorian at the end.

At a recent class in Gary, the seniors were engaged, asking questions often.

Taylor, a lively, engaging woman, roamed around the room, stopping to troubleshoot for her students. The courses are interactive — she has the seniors try everything out on their own phones.

"It wouldn't be class if you didn't do it yourself," she said.

At her classes, Taylor is assisted by a cast of volunteers, including her husband, friends from church, even a former student.

"Why is it still on conference call? Because the phone is dumb," she joked at one point, not above the frustration we all feel with our technology at times.

She coached them on how to use FaceTime on the iPhone and Google Duo on Android, how to flip the screen, how to mute yourself. She told them to put the speaker phone on when they're doing other stuff on the phone so they can still talk.

Clarence and Freda Phillips, a married couple from Merrillville, knew the basics of using their smartphones — making calls, texting — but not much else. So they hired Taylor. She came to their home and set up their new phones, transferring data from the old ones.

"I like the Duo feature," Freda said. "And being able to do more than one function at a time. I used to hang up the phone and tell people, 'I have to call you back.' "

"She taught us how to close apps," Clarence said.

"Phones are so vital."

"You have to learn, or you're going to be left behind," his wife said.

"All my kids is pressuring me to move up the ladder, get with it," said Wadie G. Spencer, 78, of Gary. She has two children and three grandkids, who all live out of town. "I just had the flip phone, would just call, leave the messages and that was enough.

"I've learned how to text, how to go to FaceTime, how to merge (calls)."

Larry Zima, 69, of Hammond, said he uses his smartphone but probably doesn't know half of what it can do.

"What all the icons are for, I have no idea," he said. "It's a good class for somebody as old as I am. I'm not very high-tech savvy."

A path to business

Taylor got interested in technology while attending Merrillville High School. She took computer classes, learned how to code. She grew up with cellphones. She can't imagine what life is like for people who didn't.

"You'll catch up. You got this," she said to a woman who was having challenges.

She shows them hacks, ones even younger people don't know, like how to edit a text message without deleting it (hold down the space bar and touch where you want to make a change). Or how to enable colorblind mode on the iPhone, if people are sensitive to certain colors.

She trains the seniors how to not fall for scams: Always look at the address where the email came from. If it's fishy, delete it.

Senora Hines, of Gary, enjoyed Taylor's classes so much she decided to volunteer at them. "It's easy to grasp, especially for us seniors," the 68-year-old said. She said she has five children, four of whom don't live nearby.

EVANSVILLE, Ind. — A church in southwestern Indiana is helping to pay off $1.5 million in medical debt for families in its community.

When it comes time to choose a Medicare plan, reviewing your options can be overwhelming. For this reason, Methodist Hospitals is offering Med…

Valpo business makes healthy meals for people on the go

Do you, like many of us, have a full-time job and no time to prepare and cook healthy meals?

New generation of entrepreneurs makes its mark in NWI

Gordon Biffle Jr. used to prepare food in the kitchen and pretend he was doing his own "Food Network" show.

When a 65th birthday arrives, so does eligibility for Medicare — and a bunch of decisions about health care plans.

Instructor Brittany Taylor, top, shows Terry Wilkerson what's on her phone screen at a January class in Gary. Taylor, through her company I Tech Teach You, has made it her goal to teach technology to seniors in the Region.

Instructor Brittany Taylor, top, discusses the interface of a smartphone screen at a January class in Gary teaching technology to senior citizens.

Brittany Taylor, through her company, I Tech Teach You, teaches technology to seniors in the Region.