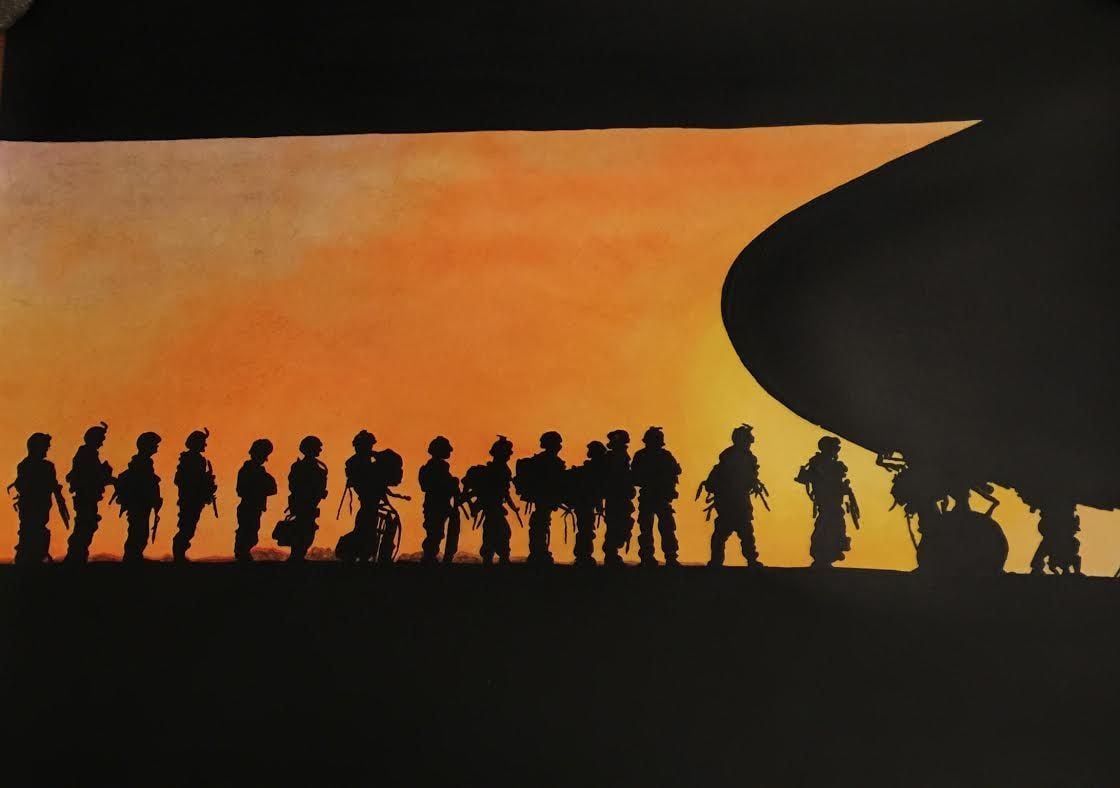 Artist Mark Paul John painted a mural-sized version of this image on a wall in the Dyer VFW. 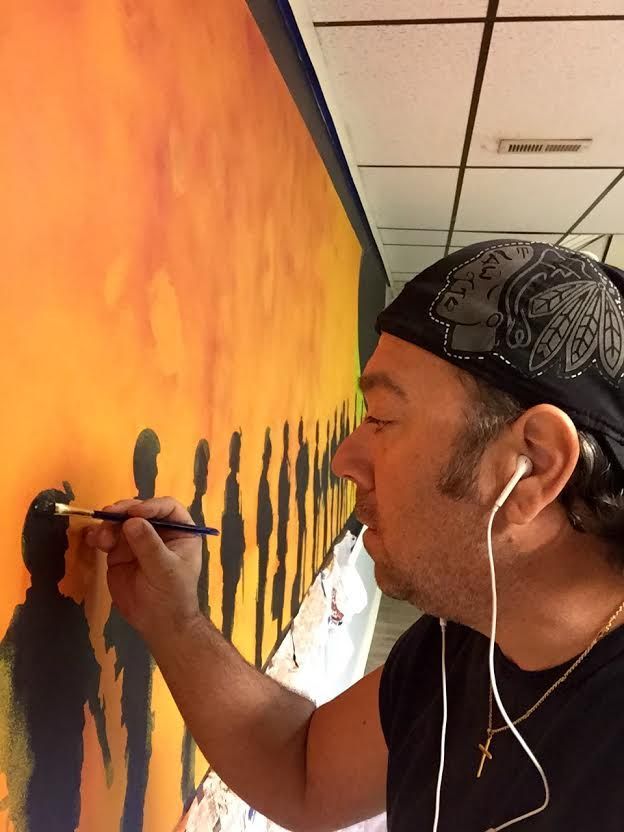 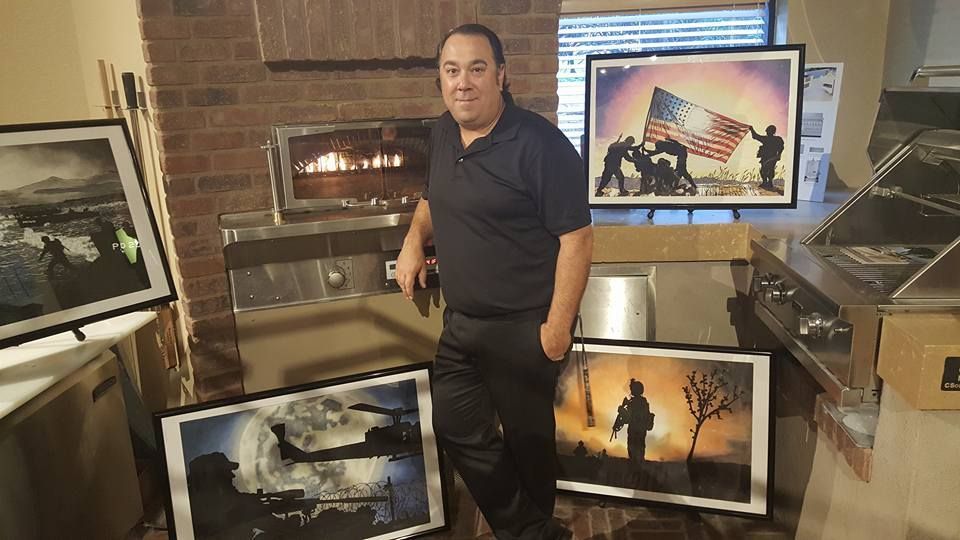 Artist Mark Paul John poses near some his pieces from the Soldier Silhouettes collection during a recent show in Arizona. 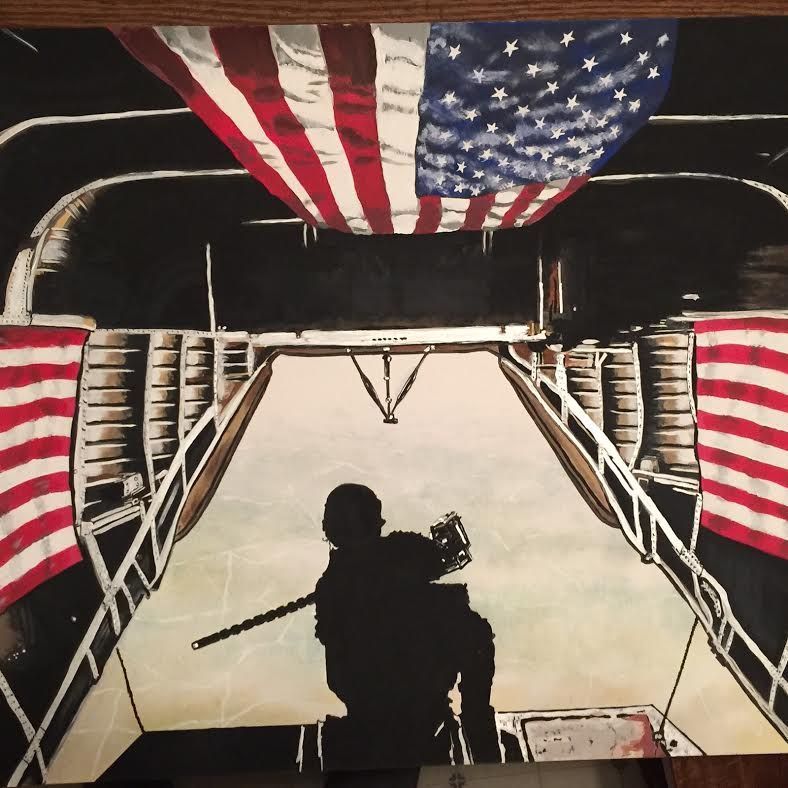 This image is part of a collection called "Soldier Silhouettes" by Mark Paul John. 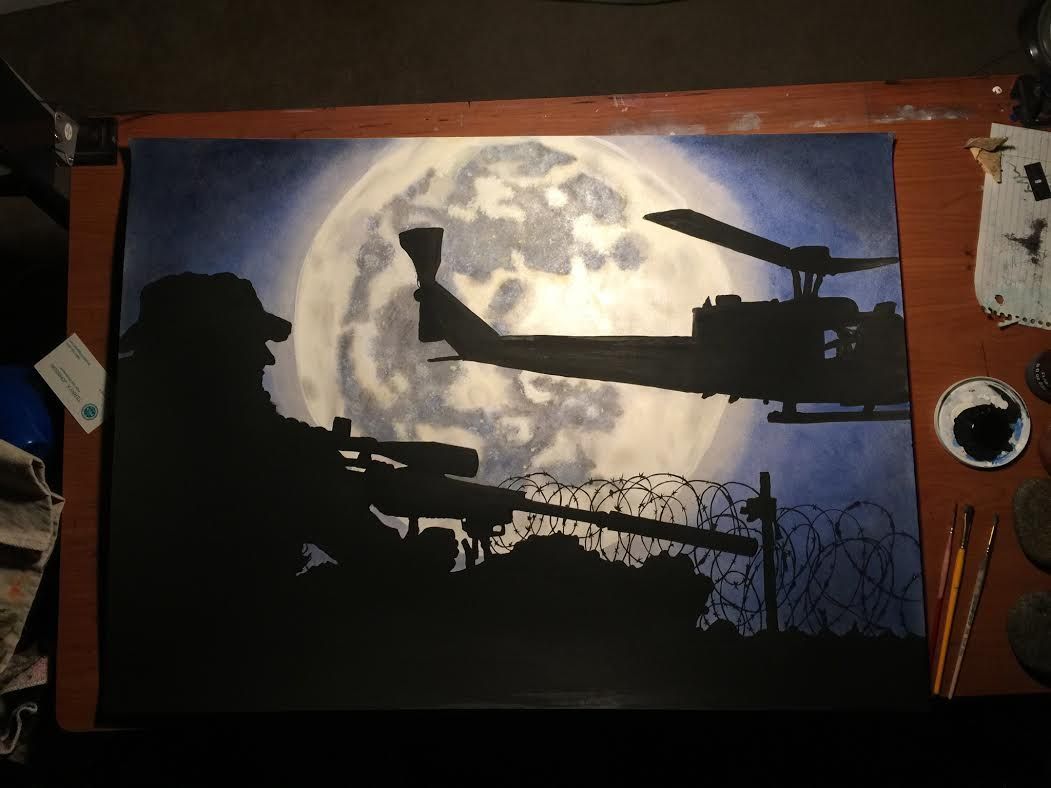 This finished painting is part of a series called "Soldier Silhouettes" by artist Mark Paul John. 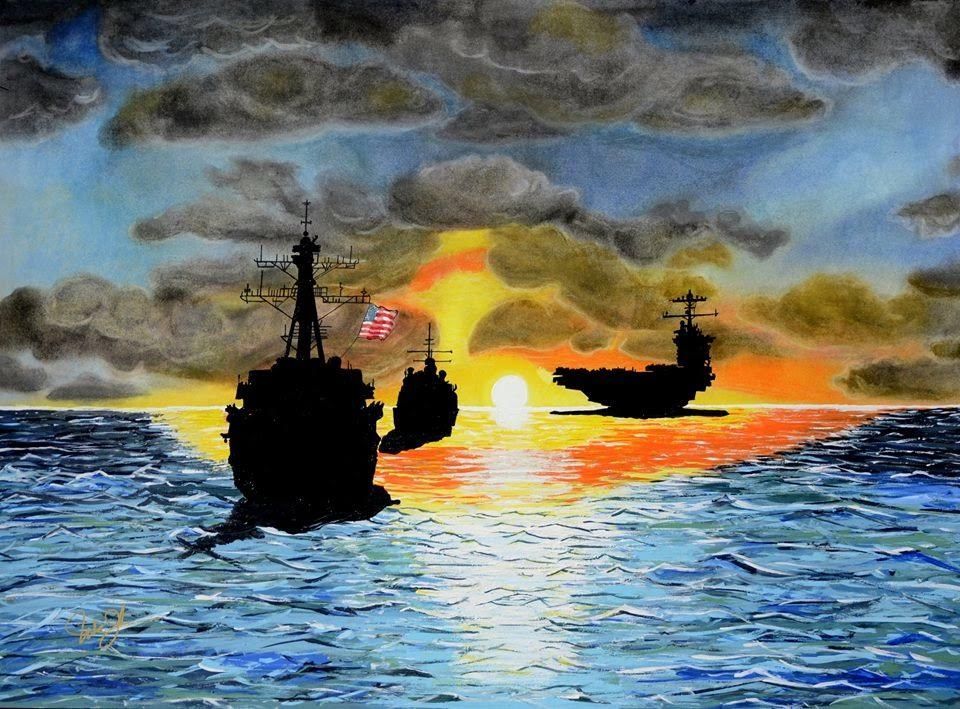 This painting is part of a new series called "Soldier Silhouettes" by artist Mark Paul John.

DYER | Against an orange and yellow sky, a line of silhouetted military personnel approach a darkened nose cone.

Titled "Coming Home," the painting is part of a 12-piece series called "Soldier Silhouettes," by artist Mark Paul John. A freshly painted version 18 feet long by 5 feet tall is depicted on a wall in the Dyer VFW, 2125 Gettler St.

"It was only supposed to be 10 feet," John said. "We made it kind of ginormous."

Going above and beyond is his style. John is the artist behind "American Pride," a piece he drew of firefighters hoisting the American flag in the rubble of Ground Zero in the aftermath of the Sept. 11, 2001, terrorist attacks. So far, he has donated 732 of the drawings around the world, to hang on fire station walls or auctioned at fundraisers.

He is getting a sports series underway to honor Chicago's teams. Word came last week that the family of ailing retired Chicago Blackhawks center Stan Mikita will accept a piece of John's art recognizing Mikita's contribution to the team.

He spoke about his art and where it has taken him during a TEDx event in September in Fountain Hills, Ariz., the state he now calls home. Region ties bring John back to Northwest Indiana and the South Suburbs often to share his art. Dyer was the first of a dozen places across the country John hopes to paint mural-sized versions of each piece, which have an original size of 20 inches by 30 inches. Hobart VFW is the next to receive a mural.

John, who used to live in Dyer and the South Suburbs, uses his art to promote numerous foundations and organizations benefiting active military, veterans and first responders, such as the Gary Sinise Foundation. The goal of "Soldier Silhouettes" is to shade faces and features to make the series relatable to all branches of the Armed Forces.

"I wanted to make sure it was all inclusive," he said. "No matter what branch, job or when you served, one of these images you can relate to."

The inspiration came during a military ball last year where he donated some art work. Someone asked if he had done anything for the military.

"That night, I went back to my hotel room and started thinking about what they said and questioned myself why I hadn't done anything with the military," John said.

The images are not combat scenes.

"I thought it was important to keep as peaceful images as I can, to keep the focus on where it should be instead of remarking on something blowing up," he said.

John spent 11 months creating the series and it is taking off in popularity.

The 9/11 picture led to a friendship with Dyer resident Don Bacso, who survived the terrorist attack on the World Trade Center. They forged a non-profit called American Pride, which offers speeches, art presentations and learning events related to the Sept. 11 attacks.

Bacso said he is amazed by his friend's latest art series and the effort that went into it, down to the detail in uniforms and gear.

"When he was putting those together, he'd stay up for 36 hours," Bacso said. "And then he's move on to the next one."

He would text his friend to check in, making sure he was taking breaks to eat and sleep. The art is having meaningful impact and drawing national recognition, Bacso said.

John is offering his 20x30-inch images at an extreme discount to military and veteran organizations, and they can turn around and auction them to raise money. He's also working on getting security clearance to visit Guantanamo Bay Naval Base to donate art there.

"I'm going anywhere and everywhere that's interested in the pieces," he said.

He is blown away by the positive responses to the military series.

"It's funny when you have a Vietnam veteran thanking you," he said. "No, thank you. You were dodging bullets. I've got a paint brush here."

Military or veterans organization seeking Mark Paul John's art can call or text him at (708) 545-7704. The public can buy his art at www.markpauljohn.com.

It's been eight years since Mark John put charcoal to paper, sketching an image that has led him into fire station bays and military bases acr…

Artist Mark Paul John painted a mural-sized version of this image on a wall in the Dyer VFW.

Artist Mark Paul John poses near some his pieces from the Soldier Silhouettes collection during a recent show in Arizona.

This image is part of a collection called "Soldier Silhouettes" by Mark Paul John.

This finished painting is part of a series called "Soldier Silhouettes" by artist Mark Paul John.

This painting is part of a new series called "Soldier Silhouettes" by artist Mark Paul John.