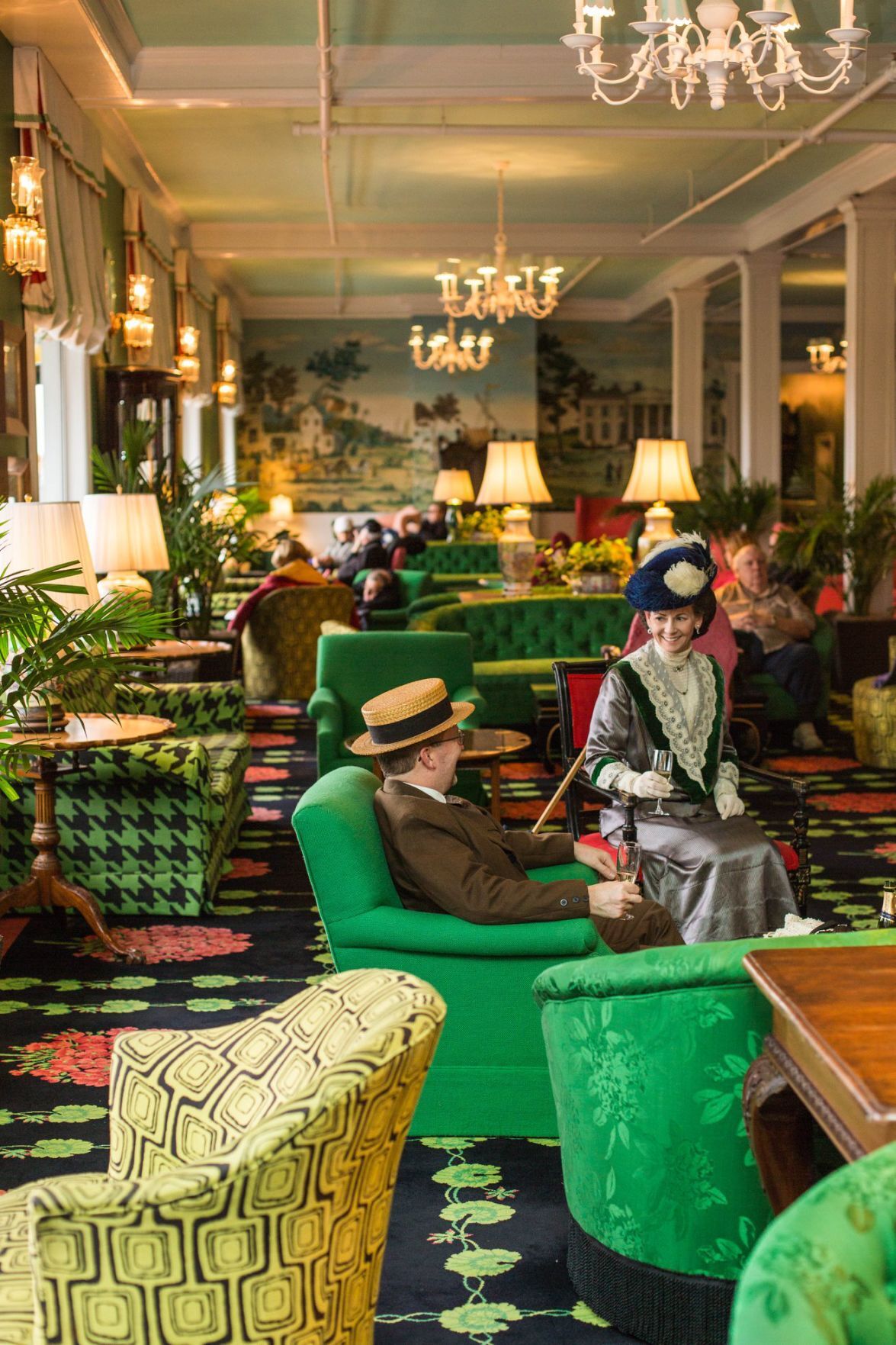 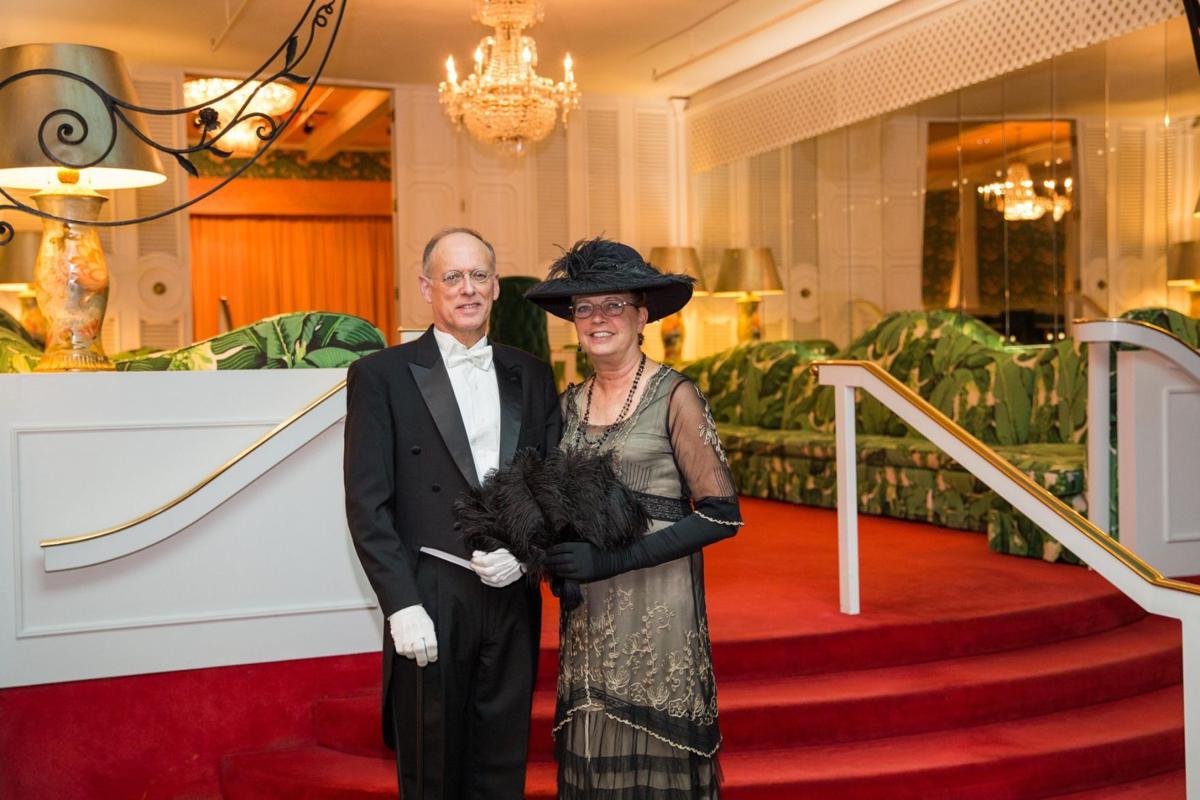 Guests at the Grand Hotel on Mackinac Island typically dress in early 20th century attire for the entire "Somewhere in Time." 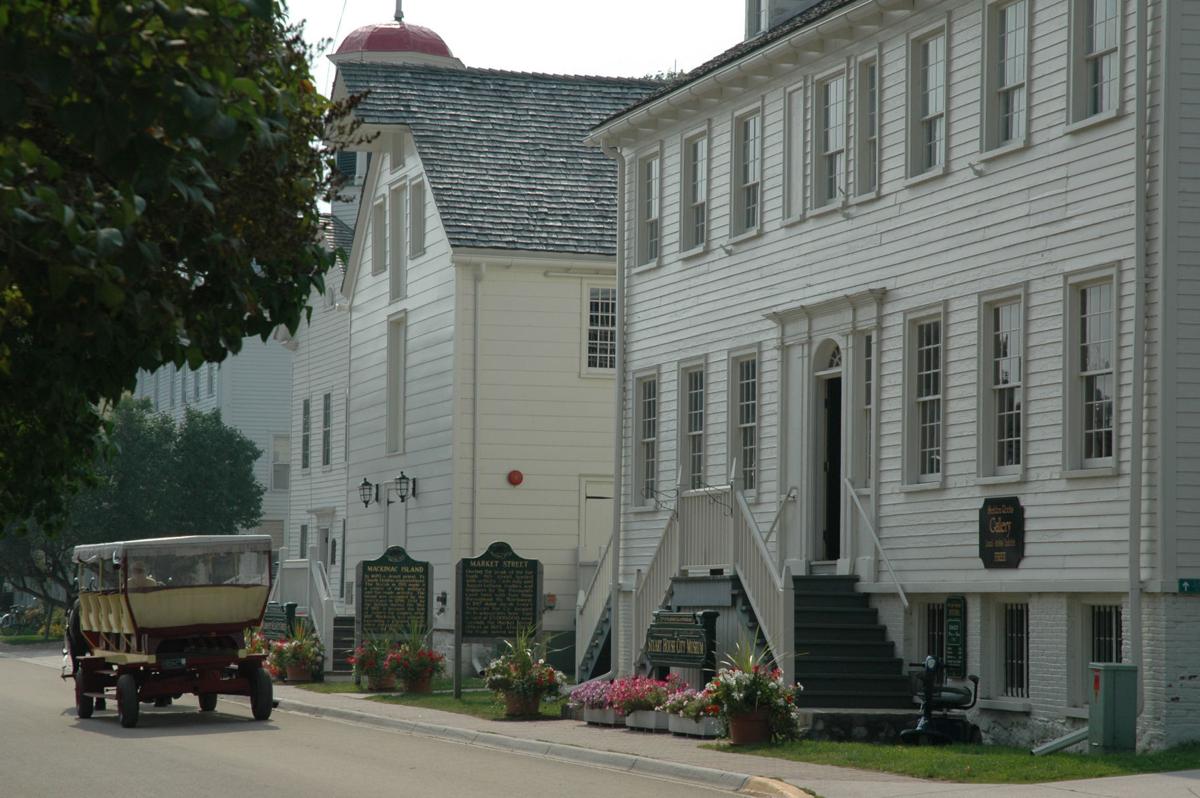 Mackinac Island in northern Michigan offers a trip back in time. 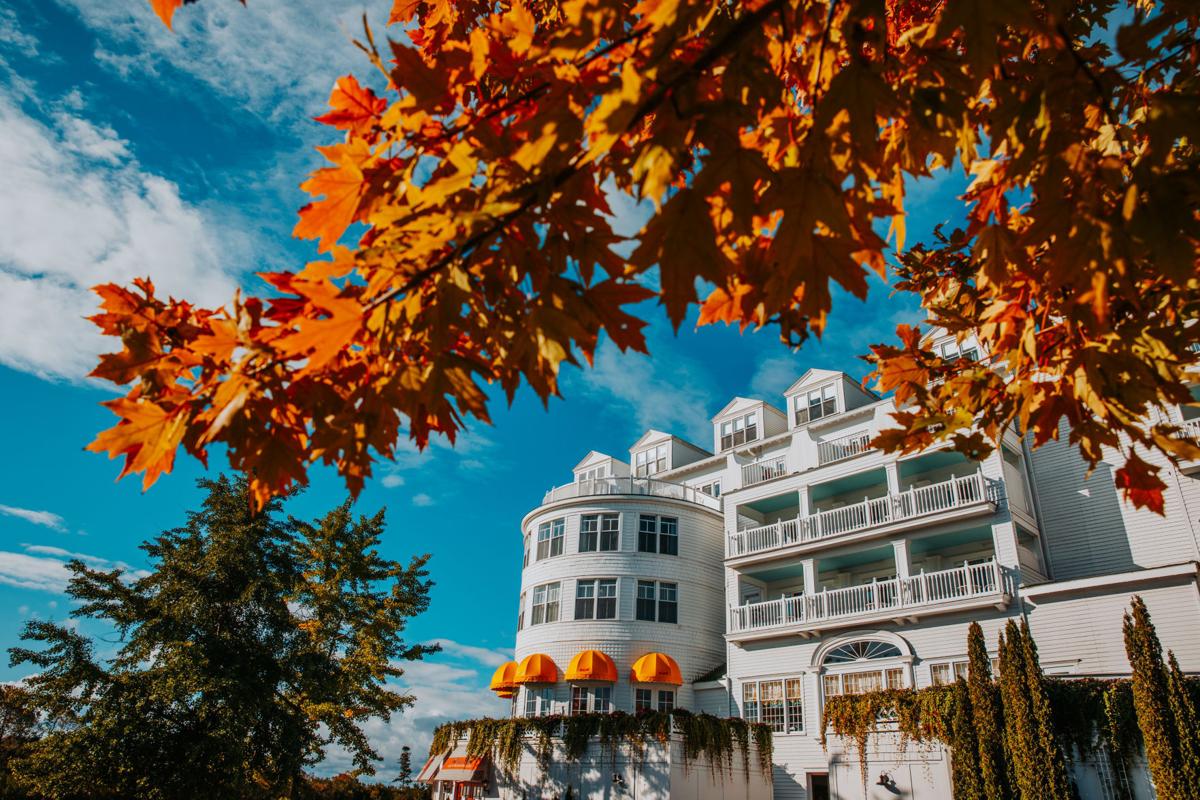 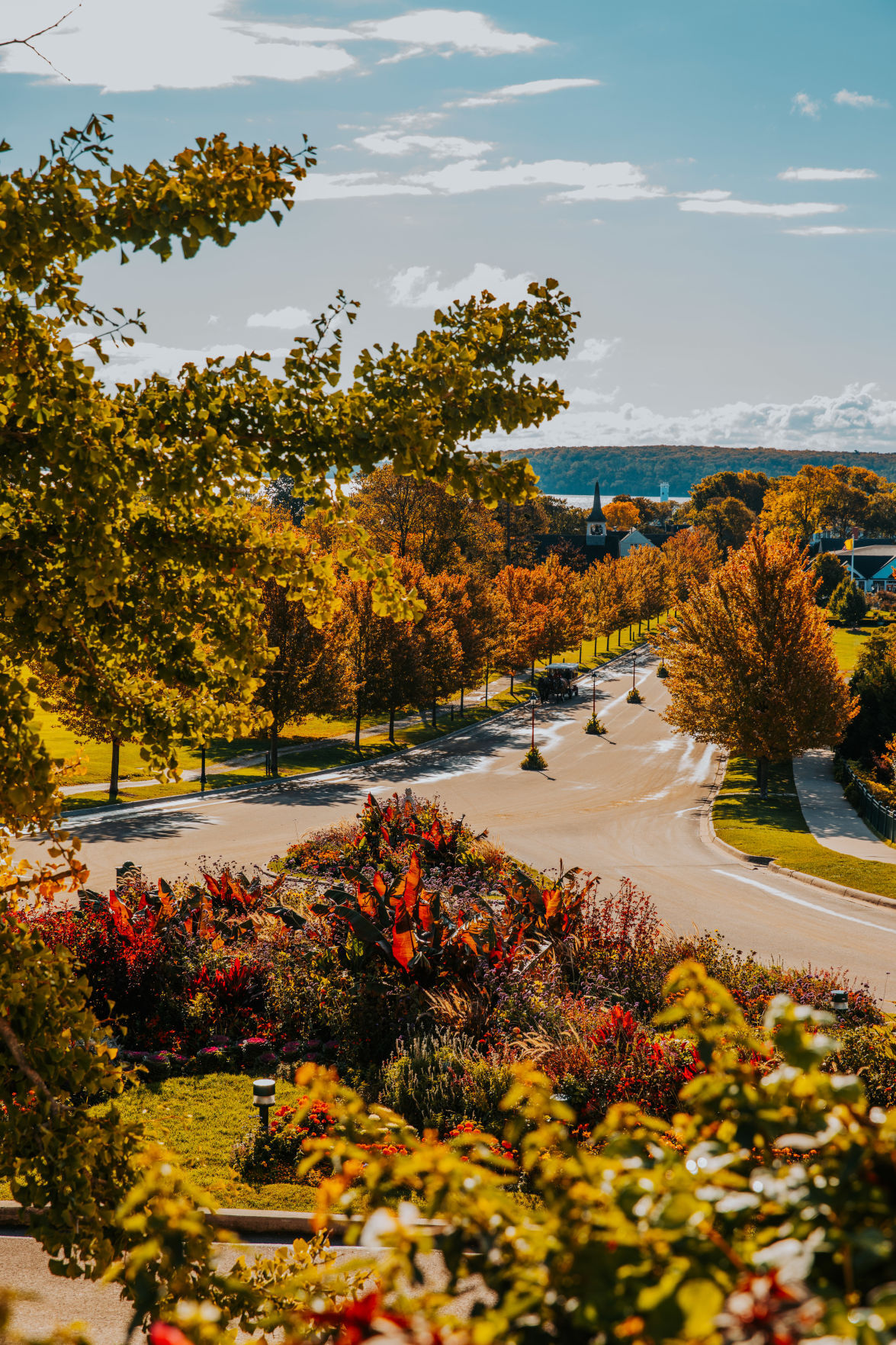 Forty-one years ago, a romantic movie about time travel was released to mostly bad reviews.

"Somewhere in Time" told the story of a playwright who becomes so enchanted with the 1912 photo of an actress visiting the Grand Hotel on Mackinac Island that he finds a way to span the decades to meet her. Of course, long distant relationships are always difficult, and those in the distant past are even more so.

But true love eventually wins out and that along with the beauty of the two stars — Christopher Reeve and Jane Seymour — and the setting — the historic Grand Hotel sitting on a rise above the Straits of Mackinac, made the film a cult classic.

True "Somewhere in Time" aficionados can kick it up several notches with an immersive experience at the Grand Hotel when the hotel again offers its own trip back in time during the uber popular "Somewhere in Time" Weekend, held this year Oct. 29-31.

Ladies, pop open your parasols, pull on your elbow-length gloves, and perch those feathered hats fetchingly on your head. As for you men, dust off the bowlers, button up the waistcoats, and learn how to tie a cravat, because many of those attending will be wearing vintage clothing for participating in the promenade parade and attending the event’s cocktail receptions. Indeed, some may never slip back into 21st century garb from the time they arrive to when they leave — by horse drawn carriage, of course.

But it’s more than just costumes. The weekend consists of such activities as discussions about the film’s production process, a screening of the movie, and appearances by returning cast and crew. "Somewhere in Time" packages also include five-course dinners in the Grand’s very grand dining room, with its long line of large windows overlooking the 660-foot porch — said to be the longest in the world and the Straits of Mackinac beyond.

Also included in the packages are the sumptuous luncheon buffet and full breakfasts, as well as ticket discounts on the ferries. If you really want to go all out, the "Somewhere in Time" Suite and the Jane Seymour Suite both feature memorabilia from the film. Out of the hotel’s 367 rooms, these are among the most requested.

The Grand Hotel is all high tea in the elaborate parlor with its Victorian era furniture and soft piano music. At night, a climb to the Cupola Bar at the top of the hotel is the place to enjoy an after-dinner drink, the soft tinkle of live jazz, and a panoramic view of the lights from passing boats and the Mackinac Bridge connecting lower Michigan to its Upper Peninsula.

Just a carriage ride away

Just like in the movie, Mackinac Island, and the Grand Hotel, built in 1887, remain what much of America was like over a century ago. Harnesses jingling and hooves hitting the road are the only traffic sounds here, as authorities banned automobiles in the late 1890s after one was brought from the mainland and scared the horses. The island is accessible only by ferry (or private plane if you want to get really modern about it) and the main form of transportation once ashore is bicycle or horse-and-carriage. For those staying at the Grand Hotel, their maroon carriages drawn by Percherons, a breed bigger than Clydesdales but not as tall, are waiting at the docks, the drivers dressed in the Grand’s livery.

The ride takes guests through the historic downtown, winding its way up the hill to the Grand. One of so-called railroad hotels, as guests arrived first by train and then crossed the water by steamer to spend all or part of the summer, the Grand is one of the few survivors of the enormously large wooden hotels popular in the late 1800s and early 1900s, with others being victim of the fact that wood and burning oil lamps don’t do well together.

The grounds are also a delight, featuring more than one and a half acres of lawn with 25 garden areas, elaborate topiary and secret outdoor niches tucked away, with statues and benches for sitting. Though it’s the most well-known, "Somewhere in Time" isn’t the only movie ever filmed here, and the large pool was used by champion swimmer Esther Williams when she filmed "This Time for Keeps" in 1947. Now 100 years old, it was upgraded last year at a cost of $10 million.

Mackinac Island visitors are dubbed "fudgies" because, during the peak season, five tons of the confection are sold daily. Any visit to the island almost demands a visit to one of the shops, most over a century old, to watch fudge as it is stirred in large copper kettles and then kneaded on marble slabs.

Besides the shops and restaurants, there are a plethora of museums including the American Fur Company Store and Dr. Beaumont Museum. Built in 1822, during the height of the fur trade business that first started on the island in the early 1600s, it also tells the story of Dr. William Beaumont and Alexis St. Martin, a French Canadian voyageur whose stomach wound from an accidental shooting didn’t heal properly (though most of the time back then such a injury would have been fatal) and provided a window into how the stomach and digestive processes work. In keeping with Halloween, Haunts of Mackinac offers guided walking tours replete with ghostly stories and legends.

Though Reeves died in 2004, Jane Seymour has returned over the years. Though she won’t be at the hotel this year, during the weekend there’s a Q&A with her about the movie. Seymour, who designs linens, has created a line of "Somewhere in Time" scarves that are available for sale, with the net proceeds going to her Open Hearts Foundation. Besides that, there’s a raffle to help defray the medical expenses of "Somewhere in Time" actor Sean Hayden’s wife, who has leukemia. The winner gets to spend 15 minutes on the phone with Seymour.

Guests at the Grand Hotel on Mackinac Island typically dress in early 20th century attire for the entire "Somewhere in Time."

Mackinac Island in northern Michigan offers a trip back in time.