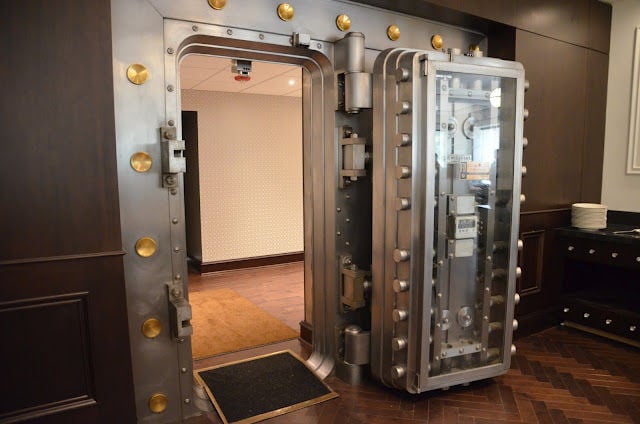 The original bank vault in the La Banque Hotel is used as a private dining room in the La Voute Bistro and Bar. 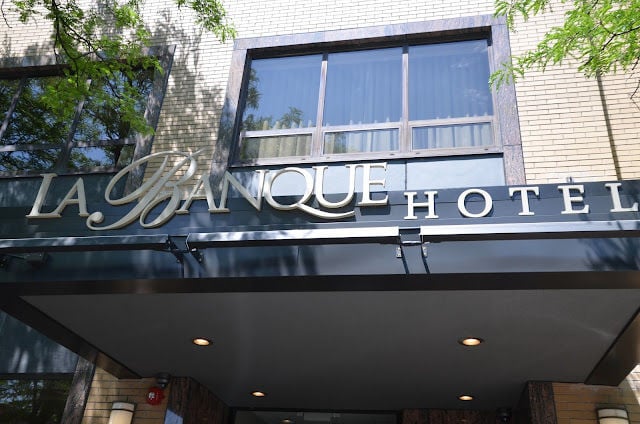 The exterior sign of the hotel facing Ridge Road. 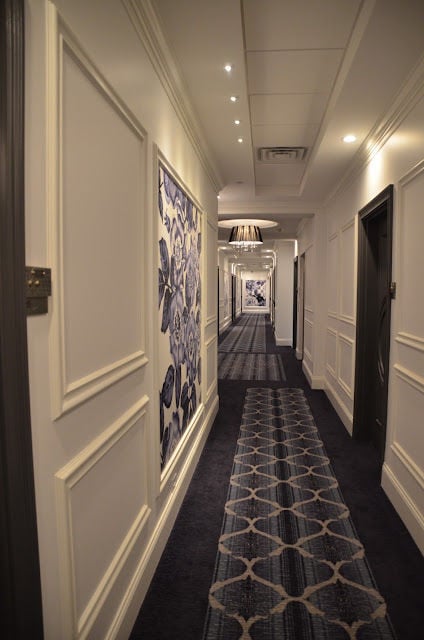 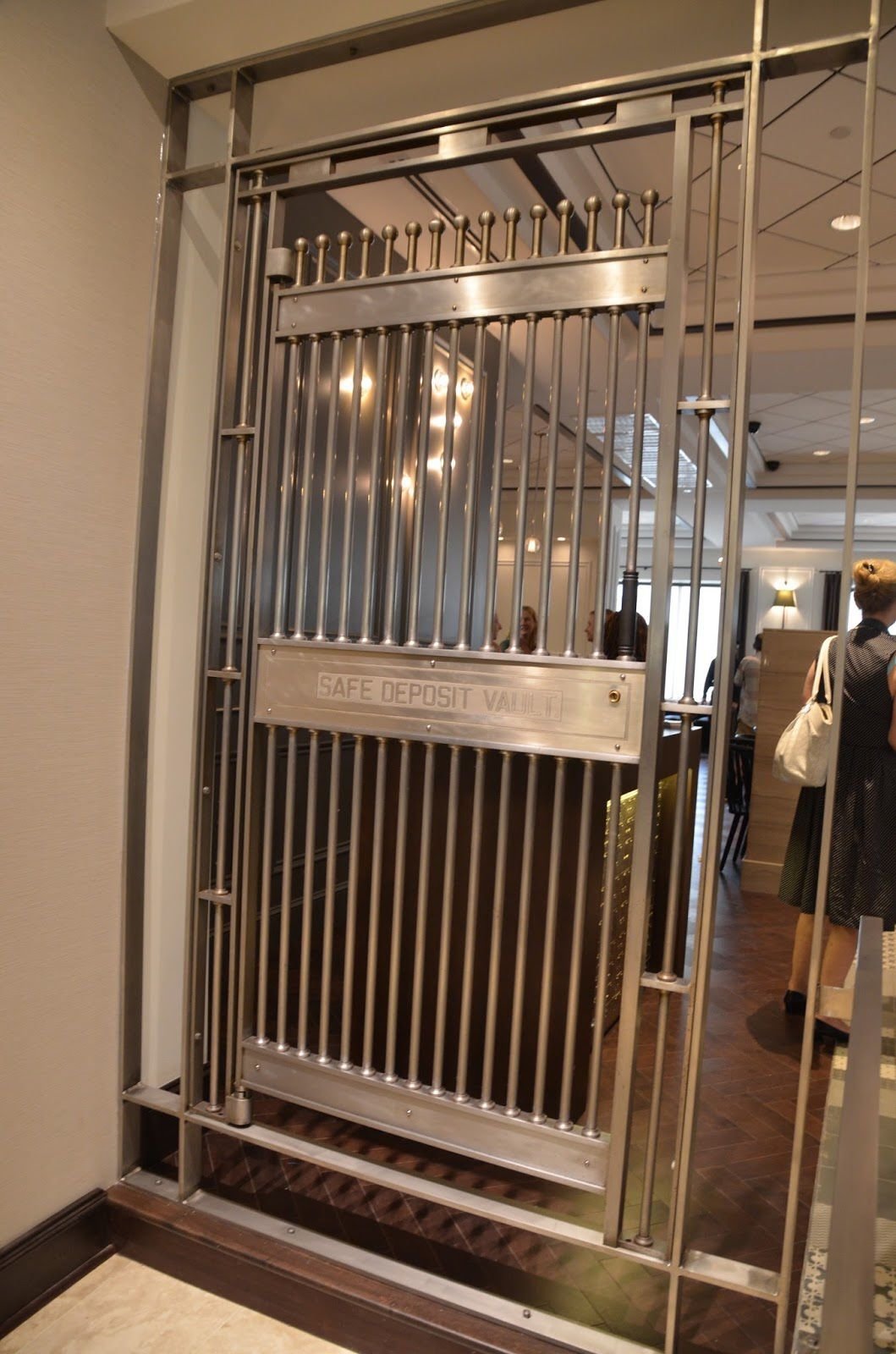 The original Safe Deposit vault door from the former bank was placed at the entrance to La Voute Bistro and Bar in the La Banque Hotel. The 1925 building is a former bank. La Banque means "the bank" in French and La Voute means "the vault." 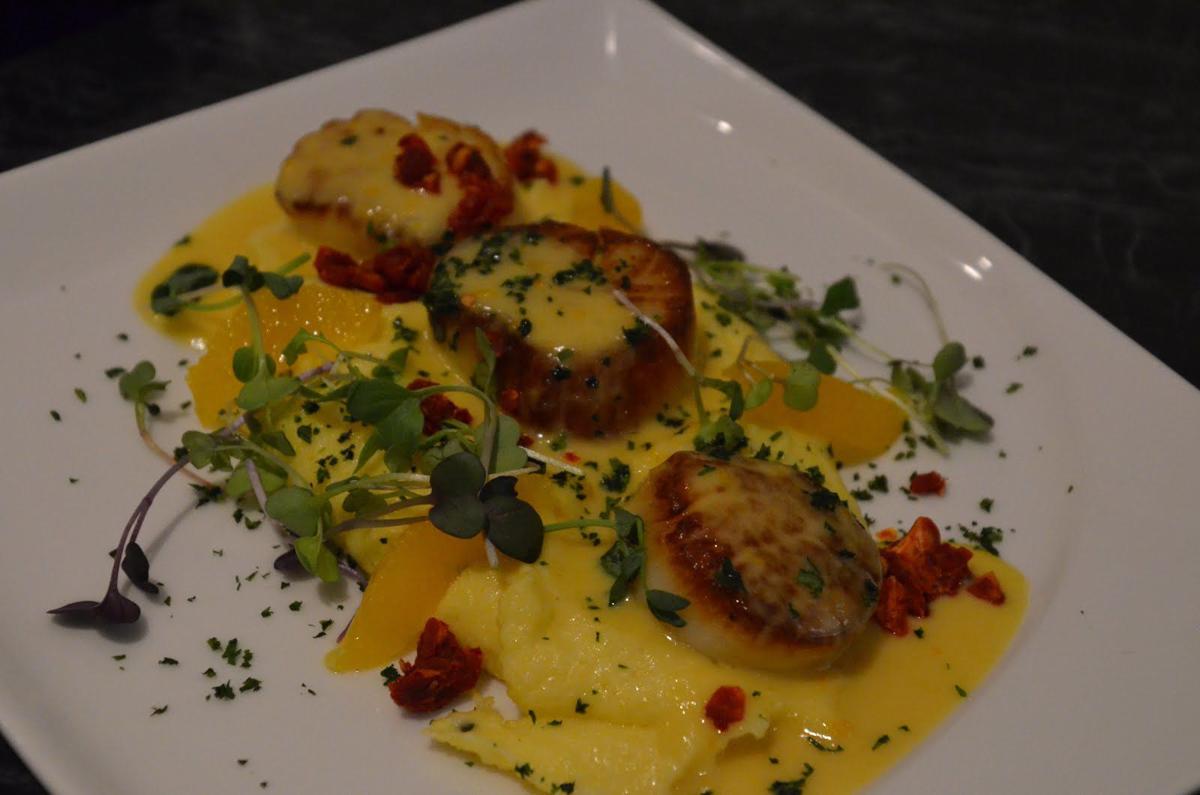 A plate of sauteed scallops is a popular menu item at La Voute Bistro and Bar, La Banque Hotel's Restaurant.

Six years ago, when La Banque Hotel & La Voute Bistro and Bar in Homewood, Illinois was approaching opening day, I was invited to a media preview event that included a tour of the hotel and a lunch hosted by the owner, Claude Gendreau. He had already purchased the nearby Ravisloe Country Club before acquiring and remodeling the former Great Lakes Bank building in Homewood’s downtown business district. Converting the former bank into a luxury hotel would make upscale lodging available within a close proximity for those visiting the country club for weddings, golfing or other events.

I was wowed by the restaurant and returned several times for lunch and dinner and once for a beer pairing event, but had hoped to make it back to experience the hotel as well. I finally scheduled a couple nights there and made it into a nice three-day staycation.

The building dates back to 1925 and it operated as a bank until 2013. La Banque is the French translation of “bank.” Gendreau’s French-Canadian heritage inspired the name, cultural touches and the menu of the restaurant. Not only did Gendreau save this historic building, but he retained some of the original contents as a nod to its initial purpose. The room numbers mounted outside each of the 18-guest rooms were once covers to safe deposit boxes. Other safe deposit boxes were used as a backdrop for the restaurant’s bar and to adorn the lobby’s check in desk.

In the restaurant, La Voute Bistro and Bar, you’ll find the bank’s original vault, which has been converted into a private dining room. La Voute means “the vault” in French. The nearly century-old vault door contains a sticker signed by J. Edgar Hoover, then director of the FBI. The restaurant specializes in French cuisine and I’ve had some really spectacular meals there. Some favorites have been the scallops, pan-seared salmon and pork tenderloin. They also have a couple vegetarian and vegan options, which I have tried that were hearty and full of flavor. Chef specials are also offered, so even if you’ve made your way through the regular menu, you can try something new on each visit.

The lower level houses a 24-hour fitness center with resistance training stations and cardio equipment. The main level has an expansive lobby and lounge area, the restaurant and bar and a conference room. On the second level are the guest rooms and I adore the blue and gray tones of the carpet, walls and floral hallway murals.

The rooms feature electric curtains, oversized showers and free wi-fi. I stayed in a king room that also had a jacuzzi tub and spent a bit of time just soaking and relaxing. The hotel is also pet-friendly. There are Kuerig coffee makers in the rooms and you can get a grab-and-go breakfast of granola bars or muffins in the lobby in the morning.

The hotel is steps away from the Homewood train station where you can take Metra into Chicago's Millennium Station if you want to spend a day in the city and have a home base in the suburbs to retreat to at the end of the day — no hassle of city driving or pricey parking. There’s a large, free parking lot behind the hotel.

If you want to explore Homewood, there are some nice parks and cool public art to view. Homewood has the largest collection of Richard Haas murals in the world - a total of 15. Several of them are within walking distance of the hotel. You can find a list and map of the murals at village.homewood.il.us. The area surrounding La Banque has a number of gift shops, boutiques and other stores and restaurants.

You can grab breakfast, brunch or lunch across the street at the Redbird Cafe or down the road at Grady’s Snack N’ Dine. Blueberry Hill Breakfast Cafe is just a short drive. Walkable eateries for lunch or dinner include Asian Harbor, Eat Rice, Empanadus, Aurelio's (the original one) and Twisted Q Barbecue. Or drive a little further for a gourmet burger and brews at Lassen’s Tap, Mexican fare at Cilantro Cocina Mexicana or classic Italian cuisine at Balagio Ristorante.

I loved that we didn’t have to go far from home to take a couple days away from our hectic everyday lives to slow down, relax and be a tourist in the area I’ve called home for decades. For more information on the hotel, visit labanquehotel.com.

What household items need cleaning everyday and what can wait

How much spending money should parents give their college student?

How much spending money should parents give their college student?

How to perk up when you're in an afternoon slump

How to perk up when you're in an afternoon slump

Travel: Southern Indiana is a beautiful spot for fall visit

Autumn is such a pleasant time to travel, and we’ve enjoyed many road trips during this time over the years. One place we have visited multipl…

At midnight, the moon reflects silver streaks across still waters and the surrounding woods are dark. At times, deer emerge from the shadows t…

Late summer and early fall are one of my favorite times to travel. Places are less crowded after Labor Day when kids are back in school. The t…

The original bank vault in the La Banque Hotel is used as a private dining room in the La Voute Bistro and Bar.

The exterior sign of the hotel facing Ridge Road.

The original Safe Deposit vault door from the former bank was placed at the entrance to La Voute Bistro and Bar in the La Banque Hotel. The 1925 building is a former bank. La Banque means "the bank" in French and La Voute means "the vault."

A plate of sauteed scallops is a popular menu item at La Voute Bistro and Bar, La Banque Hotel's Restaurant.