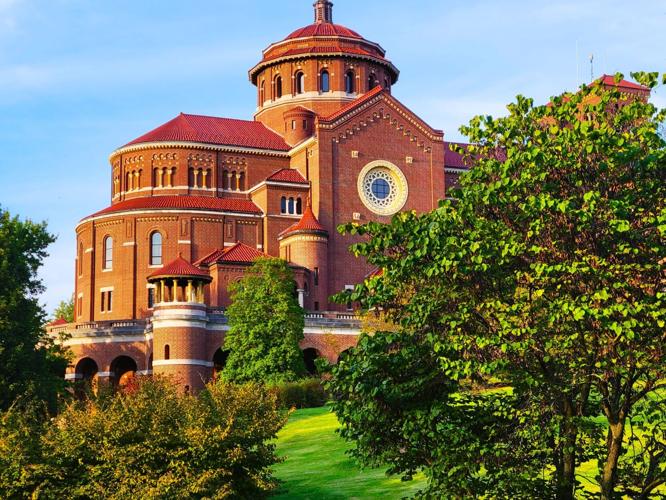 The Monastery Immaculate Conception site on a hill overlooking the town of Ferdinand. 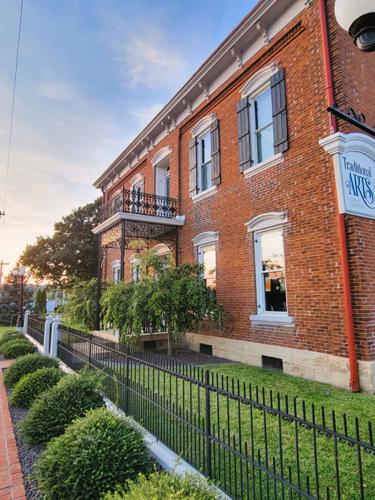 Traditional Arts Today in Ferdinand offers a variety of locally made, artisan items. 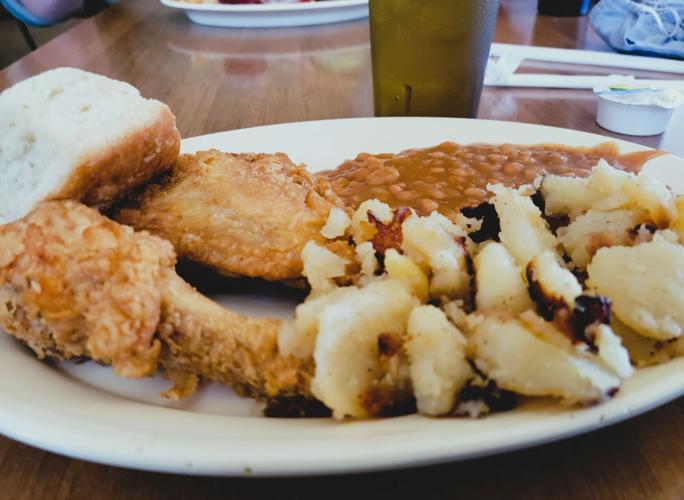 Fleig's Cafe in Ferdinand is known for its chicken dinners.

At first glance, Ferdinand, Indiana, population just over 2,000, seems like a place to pass through on the way to somewhere else. To the south is the town of Santa Claus, home to Holiday World and Splashin’ Safari amusement park. To the north is Jasper, the German-centric city and Dubois County seat with its prosperous town square. It's home to the Astra, a 1936 movie theater brought back to its former glory following a $1.7 million renovation, a historic courthouse and, stretched along the Patoka River, a restored grain mill from the early 1800s with a nearby train depot, also recreated from old times, where the vintage cars of the Spirit of Jasper run frequent tourist trips.

In between these attractions are a series of villages and little towns, each with a Catholic church sitting on a hill and a tavern serving good Southern Indiana/German foods. Some of the taverns and all of the towns are well over 100 years old.

Among them is Ferdinand, which has a variety of sites worth a visit. Soup-N-Such Bistro, known for its excellent sandwiches and soups and utterly decadent desserts, is housed in the Swiss-chalet/Craftsman-style former home of Dr. Aloysius “Alois” Wollenmann. Now on the National Register of Historic Places, it was built in 1903

Downtown shopping options, though naturally limited, include the very cute Tin Lizzie's Home Decor & Gifts and the Antique Emporium. For food, I always stop at Fleig’s Café. Don’t be fooled by the exterior; this is the place for serious Southern food with a German accent — fried chicken, fried chicken livers, fried German potatoes (they call them German fries down here), mashed potatoes and gravy, brats, sauerkraut, neck bones (and no, I’ve never ordered those and don’t exactly know what they are), pork chop sandwiches and noodles. It's all house made.

Off of Main Street (which as far as I can tell is the only street with a stop light), Traditional Arts Today is a non-profit with the mission of creating connections by providing traditional artists a venue to display and sell their art. Currently there are more than 80 artists, most of them from Dubois County and the surrounding region, whose high-quality work is on display. There are a unique variety of items including handwoven rugs, scarves, throws, and shawls, jewelry crafted from re-claimed treasures, paintings, sculptures, artisan soaps with hand-knitted or crocheted wash cloths, photography, handmade children’s clothes, baby quilts, wall art, and wooden trays.

Other items include chocolates, teas and coffees as well as cards, candles including Energy Candles, soaps, tea towels and even — and this is distinctive — battery-operated Cardinal Lanterns with stained glass cardinals. Described as a perfect funeral gift, they’re made by artist Lynn Holland, and are based on a belief that visits from the red bird cardinals represent departed loved ones attempting to contact us.

Class offerings change but have included soap making, basket weaving, Ukrainian egg decorating, chicken scratch embroidery on handmade aprons, weaving chenille scarves, mug rugs and tea towels. The goal of the classes is not only to go home with a finished product but also having learned how to produce a traditional and practical work of art.

Located in the Georgian-Italianate former home of Peter Muller, a successful Ferdinand businessman said to be the first person to own a car in Ferdinand, the lovingly restored red brick building with decorative wrought iron was built in 1865. It is one of 41 places of interest on the self-guided walking/driving tour map of Ferdinand which can be found at visitduboiscounty.com/plan-your-visit/ferdinand-historical-walking-tour. Think about that. A town of 2,000 and 41 historic places.

But as lovely as all this is, what sets Ferdinand apart from almost every other charming Indiana town is the Monastery Immaculate Conception.

The first time I saw the Monastery, also referred to as the Castle on the Hill, I thought I’d somehow been transported through a time portal into 18th century Europe. Set on almost 200 acres and situated on a hill above the town, the monastery was built in 1866 and at one time was totally self-sufficient, with its own orchards, farm and cows for meat and milk. In the early to mid-1900s there was even a small plane and landing strip.

The castle description is apt as there are turrets, towers, parapets and lots of beautiful stained glass. The architectural style is Byzantine-Romanesque with such standout features as an 87-foot-high domed church. One of the largest communities of Benedictine sisters in this country, it was founded by four nuns of the Benedictine St. Walburga Abbey in Eichstaett, Bavaria. They came here to educate the many German Catholic immigrants drawn to Southern Indiana because of its dense woodlands and rolling hills that reminded them of home.

The cows, plane and dairy are gone now. But the sisters continue to be enterprising and now have on-site — and don’t be surprised by this as we are talking about the area’s German heritage and that means beer — St. Benedict’s Brew Works, thought to be the only U.S. craft brewery on the grounds of a women's religious community. Here one can get a glass of craftily named artisan beers such as Raising Lazarus IPA, Sanctimonious Stout, St. Mary Red and Dark Souls. Open just a few years now, St. Benedict’s Brew Works has become so popular that they’ve also opened tap rooms in Rockport, a historic city on the Ohio River, and nearby Jasper.

The monastery’s gift shop is also a growing enterprise. Needing a larger space, they’ve moved from the monastery itself to near the brewery towards the back. The gift shop has, of course, religious items such as nativity scenes, angels, handcrafted Benedictine book beads, rosaries, decorative crosses, and if offers Swedish handwoven towels and clothing made by the sisters. Not only can you buy these items at the gift shop and online through their website, but the sisters handiwork is also available on Amazon. Seriously.

There’s a bakery on site and, using cookie molds brought across the ocean by the original sisters, the gift shop is known for its cookies — including shortbread, gingersnaps, buttermint with chocolate, springerles, and their recently introduced mint julep cookies. But they didn’t stop there. You can buy their bourbon-soaked fruit cakes, soup mixes, and more. The Hildegarde (named after one of the original sisters) cookie and Hildegarde Crunch Mix were both juried as Indiana Artisan certified. A high honor indeed.

Open to visitors, there are tours of the interior, pathways that lead to the gardens that grow, in a small part, the ingredients used in some of the cookies, a grotto dedicated to the Virgin Mary, and a labyrinth based upon the one in Chartres, France.

Think of it. Craft beer, house made cookies, gardens and religious contemplation. And down the hill and across the street, fried chicken and German fries.

I arrived from our latest trip feeling so refreshed. We spent three days in the resort town of Lake Geneva, Wisconsin, which isn’t very far ac…

Are you ready to retire? Here's how to tell

Watch Now: Medical information to have ready in case of emergency

Watch Now: Medical information to have ready in case of emergency

This is why you keep waking up tired

This is why you keep waking up tired

The Monastery Immaculate Conception site on a hill overlooking the town of Ferdinand.

Traditional Arts Today in Ferdinand offers a variety of locally made, artisan items.

Fleig's Cafe in Ferdinand is known for its chicken dinners.