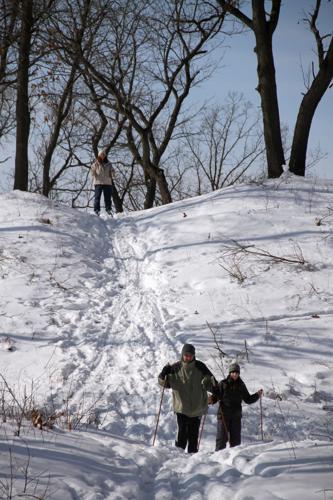 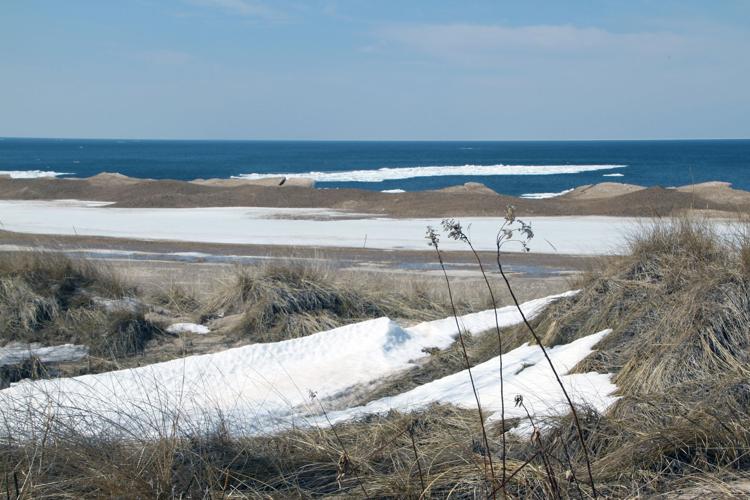 Shelf ice is shown forming in Lake Michigan off Dunbar Beach. While providing some of the best scenery during winter, the state and national parks warn visitors to stay off the ice. 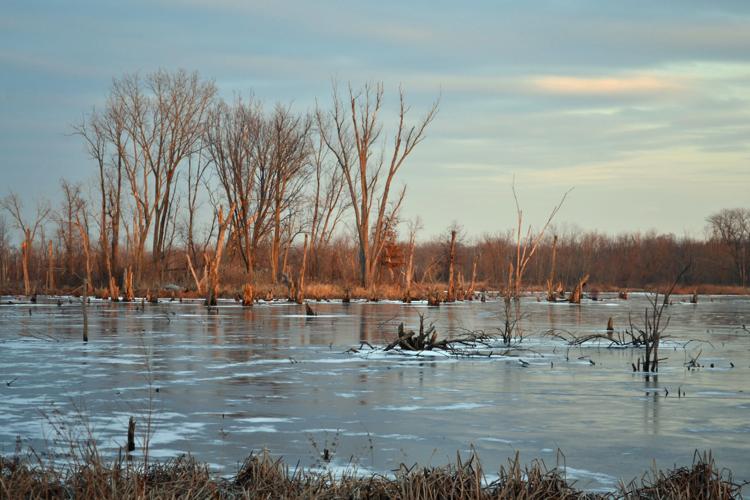 Dunes hikes are a popular cold-weather activity. The Grand Marsh is shown during winter. 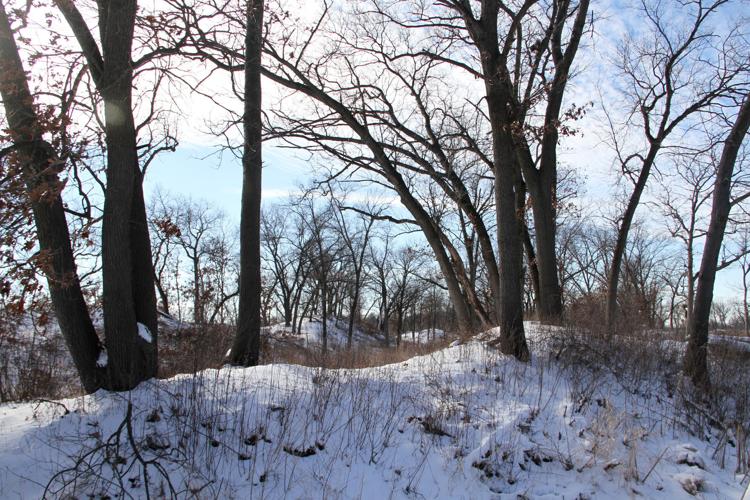 Miller Woods in the Indiana Dunes National Lakeshore is shown on a winter day. 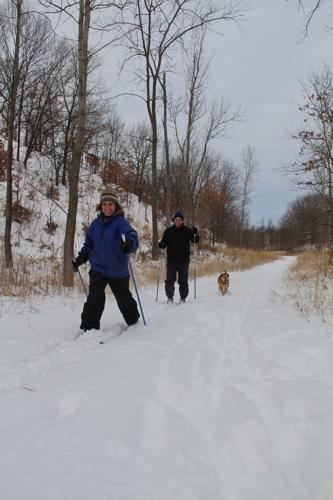 The shores along Lake Michigan are home to a variety of cures for cabin fever.

Whether a peaceful walk to check out the majestic shelf ice is just what the doctor ordered, or a more adventurous outing like sledding down Devil’s Slide is more your style, there’s something for everyone as long as you don’t mind the frigid temperatures that often accompany Midwest winters.

Here are six ideas on how to take advantage of what the Indiana Dunes national and state parks have to offer this snowy season.

With more than 60 miles of trails zigzagging through the Indiana Dunes National Park and Indiana Dunes State Park, there is plenty to explore year-round. During the winter, however, many trails are transformed into a highway for cross-country skiers.

The Glenwood Dunes Trail System features interconnected loops through gently rolling wooded dunes, ranging from less than a mile to nearly 15 miles in length, Rowe said. Skiers can access this trail system either from the Glenwood Dunes or Calumet Dunes parking lots.

“Tolleston Dunes Trail System is a 2.9-mile trail that winds amid varied habitats ranging from oak savanna to wetlands, and is a good choice for advanced skiers,” he said. “There are some difficult hills that can be tricky to navigate.”

The Paul H. Douglas Trail provides a one-mile easy loop with a small hill to navigate. Skiers can access the harbor belt, which is a former train track, from this loop. The harbor belt is a longer, flat east-west trail, Rowe said.

In addition to cross-country skiing, these trails can be used for hiking and snowshoeing as well, though users are asked to walk to the right of the cross country ski tracks when possible to maintain the trail for skiers, Rowe said.

“We recommend that there be at least a 3-inch snow base for skiing or snowshoeing,” he said.

2. Take on an epic challenge

Winter enthusiasts who want an epic challenge can hike the “3 Dune Challenge,” which involves a legendary climb up the three tallest sand dunes at the Indiana Dunes State Park.

Despite it’s difficulty, the challenge is in fact easier to master during the cold, she said.

“The hike is easier during the winter months when the sand is cold and easier to climb on,” Senderhauf said.

Whether you have kids or simply want to feel like a kid, sledding will do the trick.

The Indiana Dunes State Park allows sledding at just one of its dunes — Devil’s Slide. The slope runs from a high point atop the natural dunes down to the lakeshore.

Two years ago, the National Lakeshore designated a sledding hill at the park’s West Beach area.

“This spot, located behind the picnic area, has a large open sandy slope without any dune plants growing on it,” Rowe said. “It is the only area open in the national park for sledding to protect park resources and to keep visitors safe.”

One of the most beautiful sites along Lake Michigan in the winter is the shelf ice. Taking on an arctic appearance, the lake forms ice when the surface freezes. Large platforms of ice can be seen from the beach, where Rowe says visitors should remain.

“Be sure to enjoy this view from the safety of the shoreline and never venture out onto the ice,” he said.

Despite its appearance, the ice on Lake Michigan is not solid, Rowe says.

“In fact, due to the way it is formed through wave action, the shelf ice has numerous air pockets hidden beneath a snowy cover,” he said. “A person can easily fall through the ice and into frigid water.”

While the national park usually offers ranger-led programs and hikes on the weekends during the winter, this year, the park will not due to the difficulty in social distancing, Rowe says.

However, the state park will host a few events through the winter, though some are by reservation only.

Upcoming events at the state park include a High Dunes Hike on Dec. 12, a J.D. Marshall Shipwreck History Hike on Dec. 20 and a self-guided Christmas Eve Morning Stroll on Dec. 24.

More information about these and other events can be found at in.gov/dnr.

Visitors to the Indiana Dunes State Park can enjoy an added perk during the week.

The state park waives its admission fee on weekdays during the winter, Senderhauf said. This offers the perfect opportunity to take advantage of many of the activities listed above, as well as others such as wildlife viewing and birdwatching — two additional winter activities popular in the park during the winter months.

Admission to the national park is generally free year-round, though an amenity fee is charged per car for the West Beach area during the summer months. However, during the winter months, there is no charge to enter West Beach where the sledding area is located, Rowe said.

McDonald's is selling Happy Meals to adults — with a twist

McDonald's is bringing back its family of recognizable figurines in a new adult Happy Meal, which, yes, includes the toys.

Fans have been demanding the company bring back the items previously called "KFC Twister Wraps" since they were pulled from menus in 2014.

National Taco Day: Where to get free or cheap tacos on Oct. 4

This is the best Taco Tuesday of the year.

When to put up your Halloween decorations, according to experts

Decorating for a holiday too early can draw glares. But fall is here, and that means Halloween decor is going to make its way onto front porches.

Start your day off right by scoring a cup on Thursday.

First it was streaming services, then it was tacos and now the newest subscription you might be paying for: Chinese food.

Good Samaritans are being hailed after they stopped to investigate along a highway when they noticed an abandoned suitcase “moving” by itself.

This week brings us into autumn already.

Marilyn Monroe’s on-screen costumes are almost as iconic as her. Suffice it to say, “Blonde” costume designer Jennifer Johnson felt an enormous amount of pressure to get those dresses right for the Netflix film, streaming Wednesday. “Blonde” may be a fictionalized version of her story, but the costumes are ripped from reality. The vast majority of the frocks Ana de Armas wears in the film, from the white pleated “Seven Year Itch” number to the pink “Diamonds are a Girl's Best Friend” gown, are recreations that Johnson and her team had to make without the actual reference garment on hand.

Regrow veggies from kitchen scraps on a sunny windowsill: Here's how

Interested in reducing food waste and saving money on produce? Try regrowing vegetables from kitchen scraps right on your windowsill.

The benefits of quitting alcohol

The benefits of quitting alcohol

Six easy ways to save money on your groceries

Six easy ways to save money on your groceries

Study: The health benefits of coffee get better the more you drink it

Study: The health benefits of coffee get better the more you drink it

Shelf ice is shown forming in Lake Michigan off Dunbar Beach. While providing some of the best scenery during winter, the state and national parks warn visitors to stay off the ice.

Dunes hikes are a popular cold-weather activity. The Grand Marsh is shown during winter.

Miller Woods in the Indiana Dunes National Lakeshore is shown on a winter day.