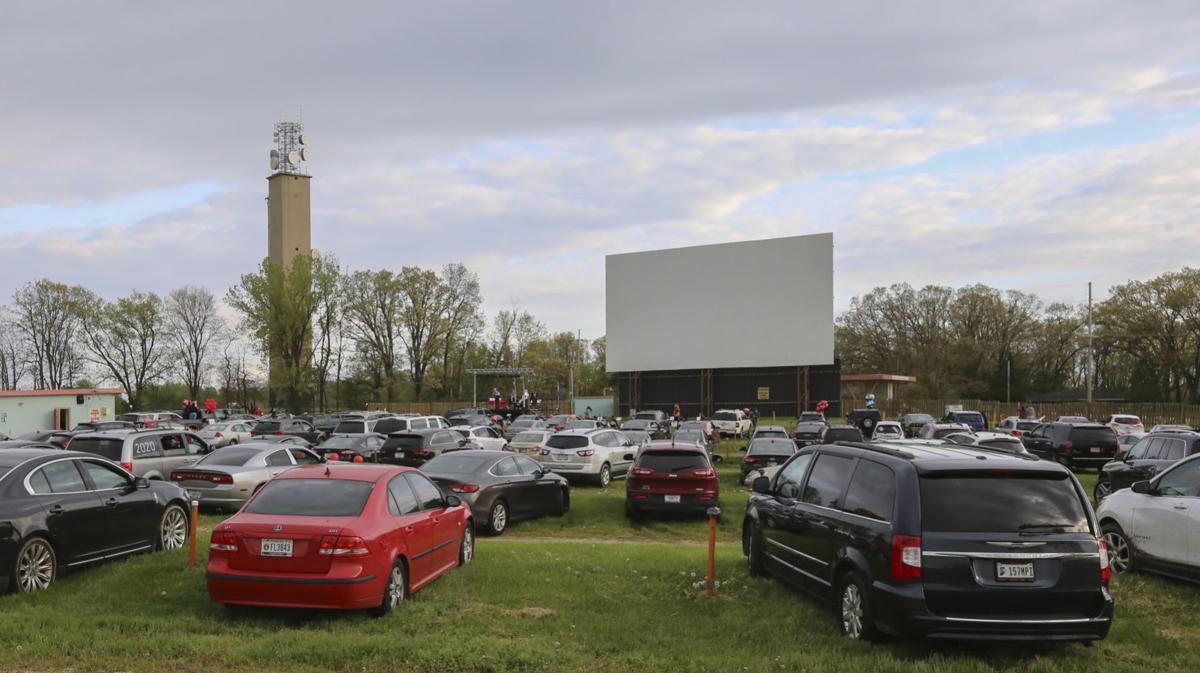 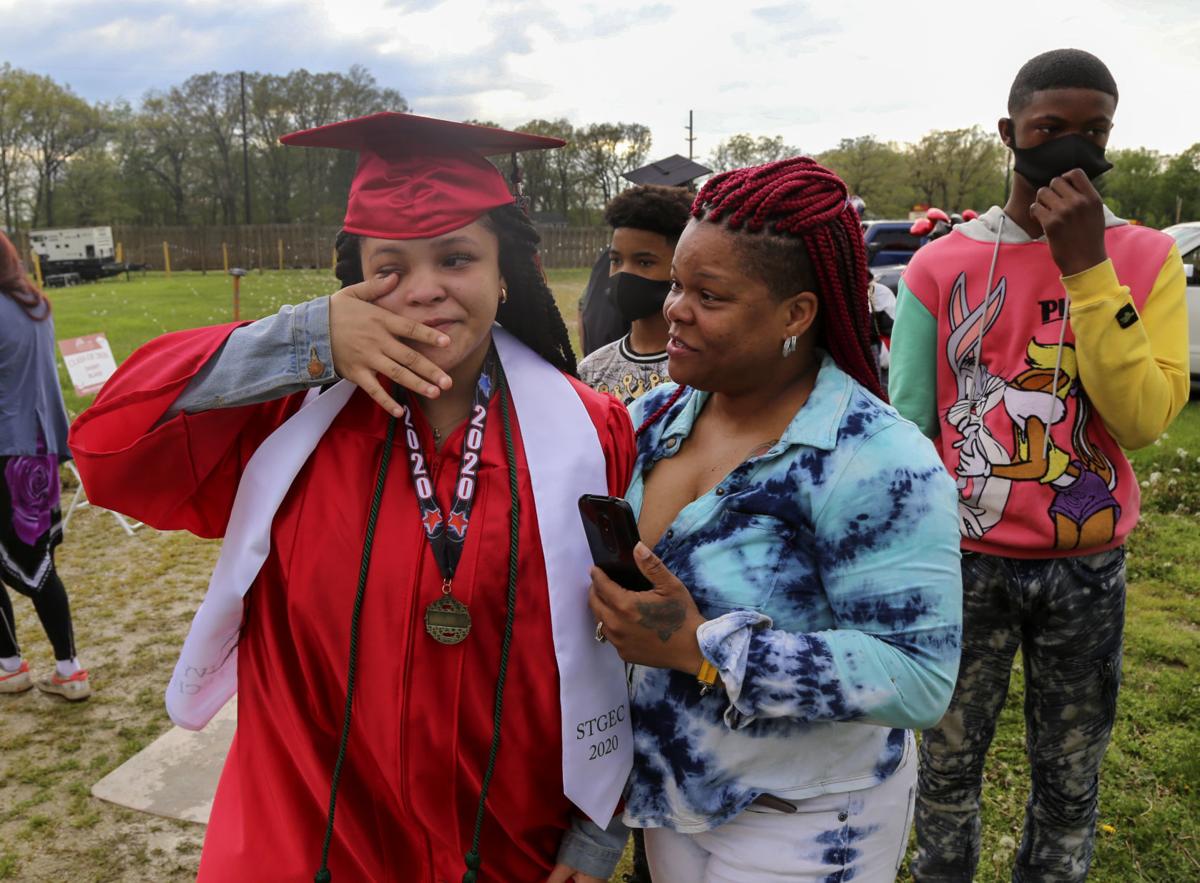 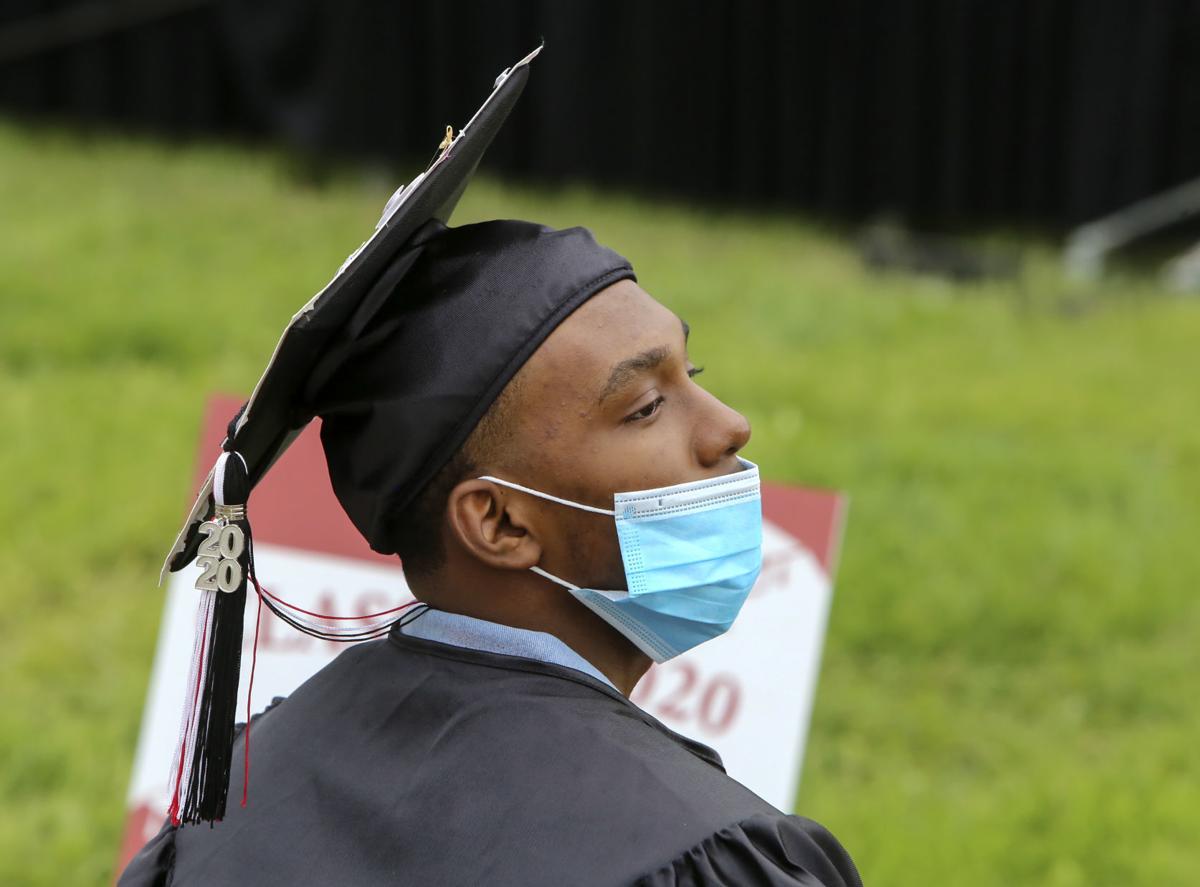 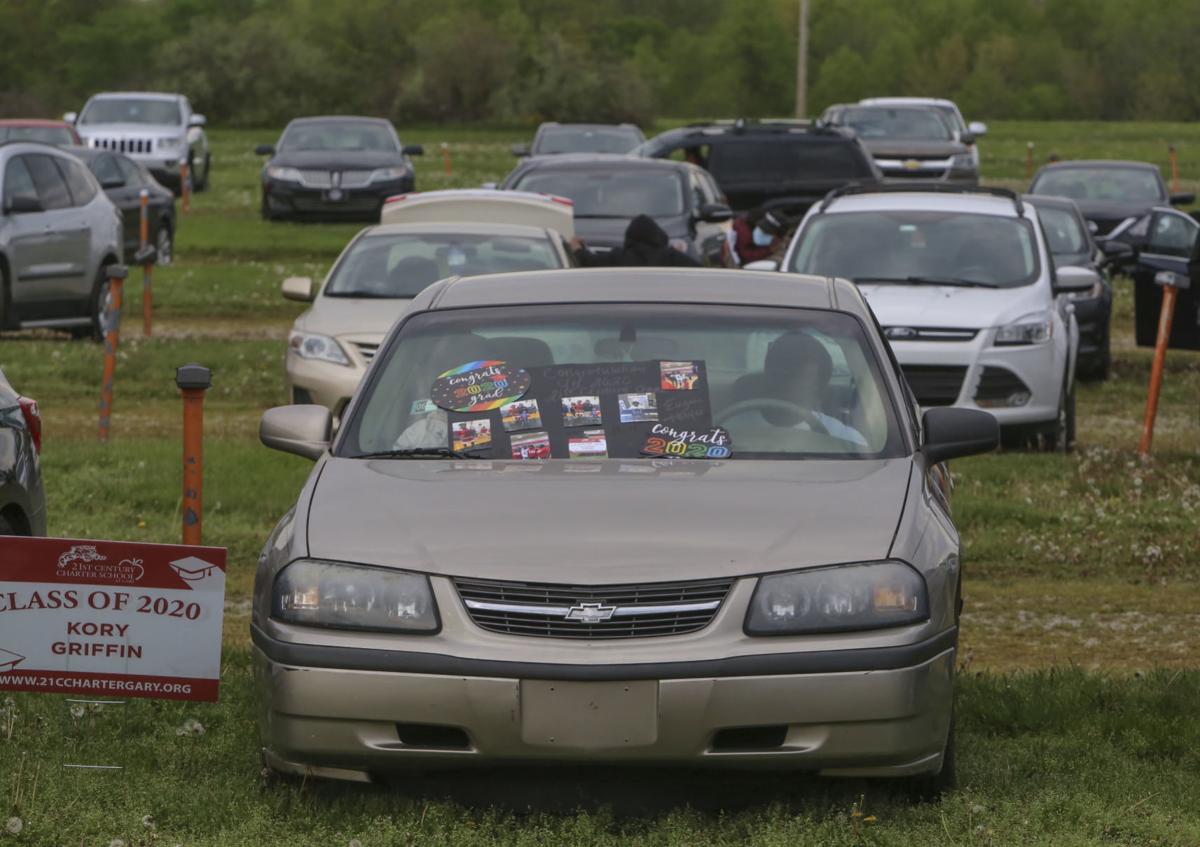 Family and friends sit in their cars as 49 students from Gary's 21st Century Charter High School participate in their graduation ceremony on Monday night at the 49er Drive-In Theatre.

VALPARAISO — Who ever heard of a high school graduation ceremony at a drive-in? Then again, whoever heard of social distancing before March?

In a season of many changes for graduates, 21st Century Charter School of Gary moved its commencement to the 49er Drive-In Theatre Monday evening.

“I like that we’re all here,” said valedictorian Andrenia Hall, who hopes to become a doctor.

The 49 graduates experienced an evening of speeches, videos and slide shows, and one last opportunity to be together, albeit at a safe distance.

“It’s great to have the opportunity to do something special for the kids,” Assistant Principal Joshua Craig said. “At least we have a way of having everyone together.”

Drive-in owner Mike Cotton said this was the first outdoor ceremony of this type at the Theatre, which opened in 1956. Principal Kevin Teasley approached Cotton about the graduation ceremony.

“In what has been an unbelievable year, we are able to do something unbelievable and neat for our graduates,” Teasley said.

Families entered the drive-in, where the graduates-to-be found chairs with their names and protective masks and gloves. Families and friends remained in their vehicles throughout the ceremony, listening to the program on the radio.

Following speeches and the presentation of diplomas, the program featured a video on the movie screen of the 21st Century boys basketball team that won its fifth straight sectional before the coronavirus pandemic ended its season, along with a slide show of the senior class.

Teajawon Pellebon, who plans to continue barber classes, said through the outdoor ceremony, “we get to embrace each other and be with the people we studied with.”

+15 WATCH NOW: Meat industry butchered by COVID-19 in the Midwest

Michelle Barnes, a mom, was tearing up as she helped daughter Evonn Posey with her cap and gown. “This is for the kids,” the mother of the future Indiana University finance major said.

Many of the students wore gym shoes, including Kendall Means, who had custom-made shoes with a cougar paw for her school mascot.

“We gotta go out in style,” said Means, who is headed to Ball State.

The return of the bus service is part of a wider effort by the city and state to reawaken the economy that has been largely shut down the last couple of months by health concerns and a stay-at-home order.

Adler Planetarium lays off 120 employees due to coronavirus

Chicago’s lakefront planetarium will lay off 120 part-time and full-time employees because of revenue loss during the coronavirus pandemic.

The Catholic Foundation for Northwest Indiana has decided that all 2020 Mercy Fund grant monies will be awarded to support the immediate needs of the hungry within the four-county Diocese of Gary.

Valpo plans to reopen to the public — cautiously

As part of the return to full operation at city hall, all employees will have their temperature checked daily and will be required to wear face masks in common areas.

MC exploring use of scholarship funds for coronavirus relief

The City Council has scheduled a workshop for Tuesday to further discuss the proposal to take $750,000 out of the city’s Promise Scholarship account for COVID-19 relief.

Salons, restaurants, and the Southlake Mall reopens today — here's what you need to know

Starting today, many Lake County dine-in restaurants, hair salons and retail including the Southlake Mall are reopening for the first time in months with restrictions in place to help prevent the spread of the coronavirus.

Under the guidelines, table games will be limited to three players, poker and pai gow rooms will be closed and smoking will only be allowed in designated areas.

Following stage three of Gov. Eric Holcomb's Back on Track Indiana plan, the Crown Point, Hammond, Griffith and Whiting locations are set to open May 24 — at a reduced capacity with social distancing measures in place.

The additional deaths brought totals to 136 in Lake County, 15 in Porter County, 14 in LaPorte County, nine in Newton County and one in Jasper County.

Indiana names all educators Teacher of the Year

Who is Indiana's best educator? In a nod to teachers' exceptional flexibility this spring, the IDOE is naming all Hoosier educators Teacher of the Year.

The program is expected to reimburse families for meals their children would have received had schools not closed this spring due to the novel coronavirus outbreak.

Each Ivy Tech Lake County campus graduate will receive a mortarboard and tassel, courtesy of the college.

Jayden Johnson said he wanted to help his classmates and others have access to proper eye care, so he began researching the topic

'We are the hope': Lake Central celebrates Class of 2020 in summer commencement ceremony

Lake Central spread a message of hope as its Class of 2020 graduated in a sunset ceremony Thursday night.

Two Gary charters have been given notice of probation as growing divisions in school management deepen.

Family and friends sit in their cars as 49 students from Gary's 21st Century Charter High School participate in their graduation ceremony on Monday night at the 49er Drive-In Theatre.