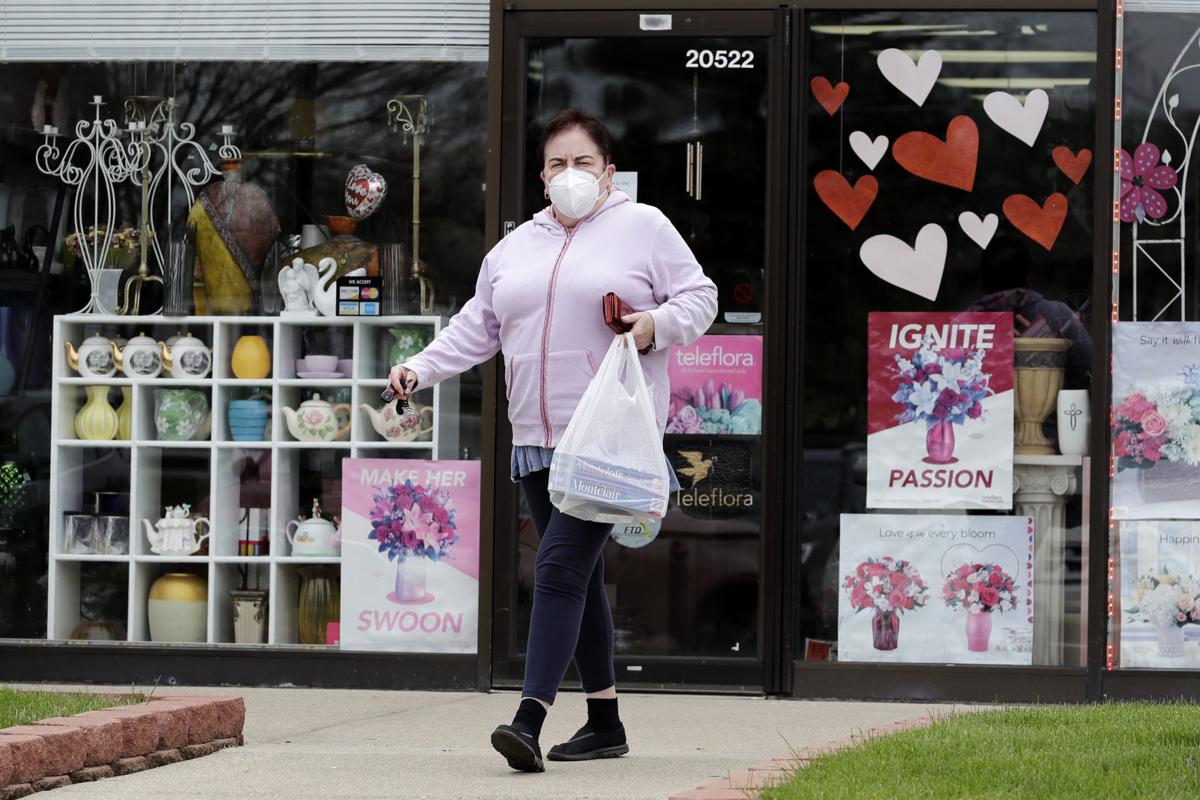 A woman wears mask as she leaves a store during the coronavirus pandemic in Deerfield, Ill., Tuesday. New Illinois rules about wearing a face mask over age 2 start Friday, May 1, when they can't maintain a 6 foot social distance in public. 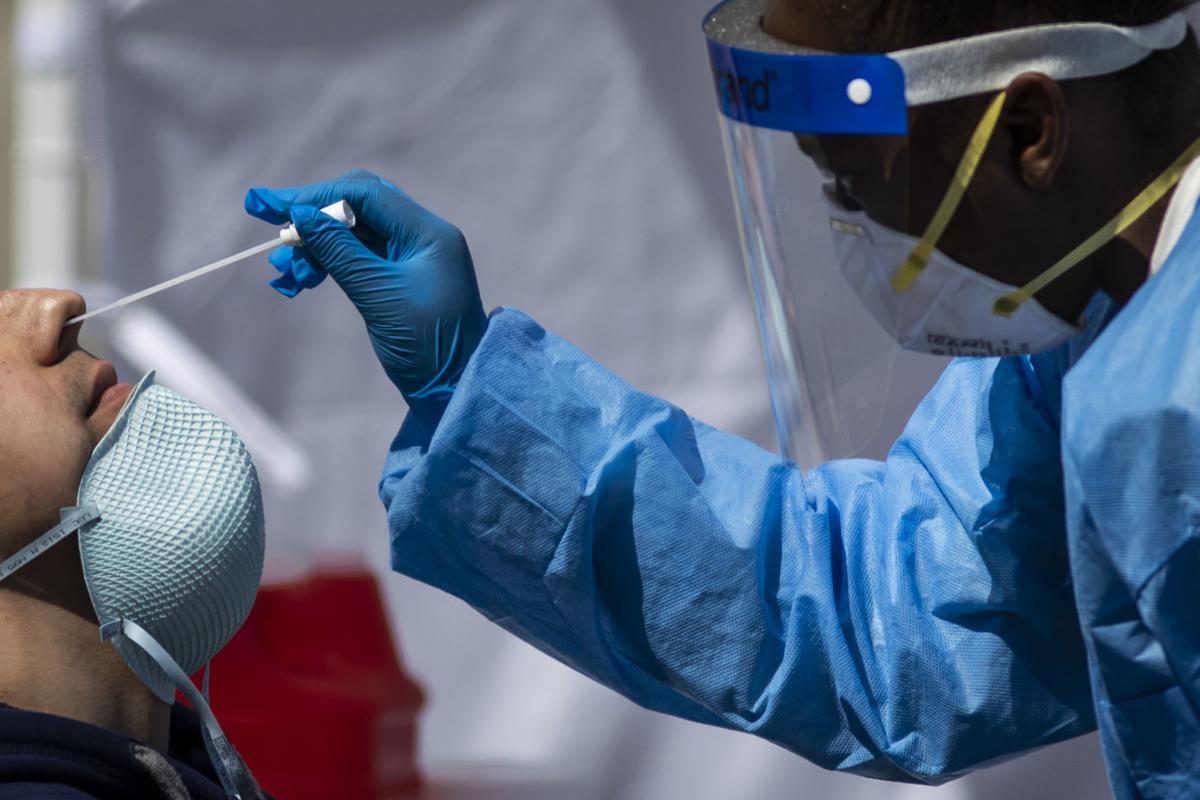 Phlebotomist Crystal Bovan, with Simple Laboratories, collects a nasopharyngeal swab sample to test for the coronavirus for a man at the lab's drive-thru testing site in the parking lot of St. Rosalie Catholic Parish in Harwood Heights, Chicago Friday. 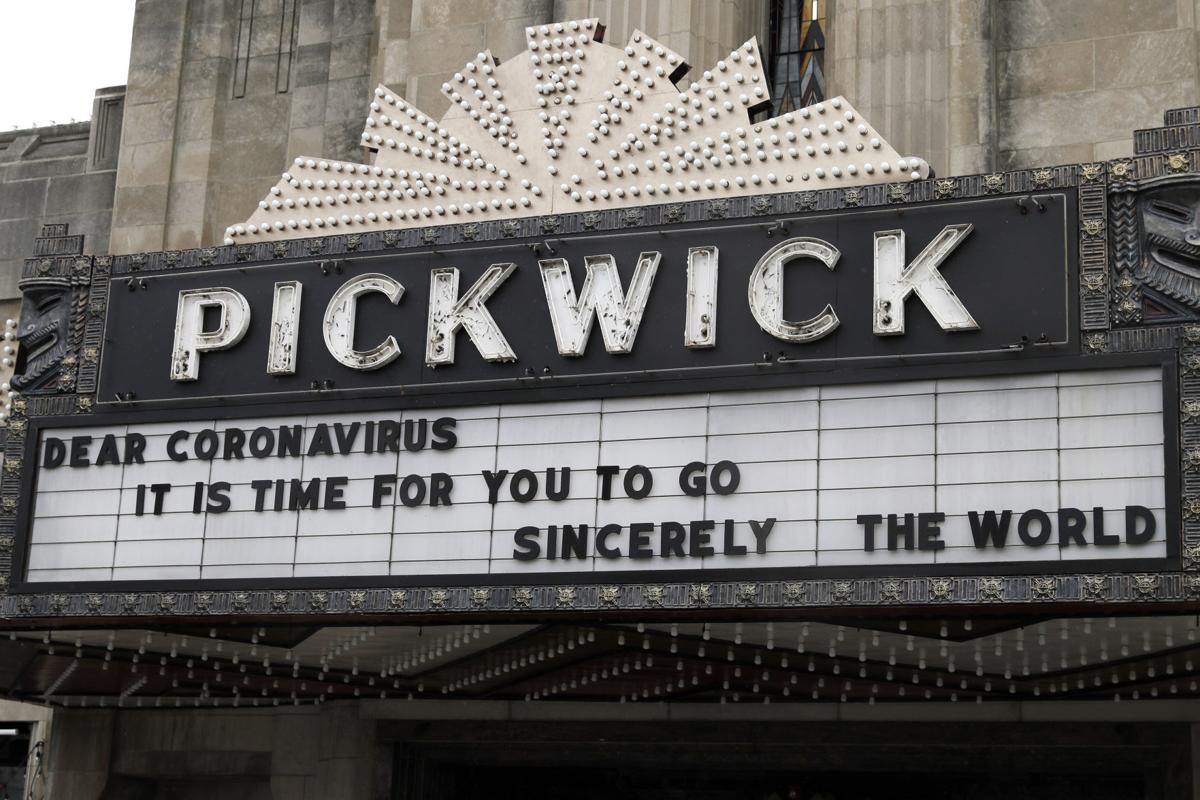 A sign is seen at the Pickwick Theatre in Park Ridge, Ill., Tuesday. The cinema has been closed during the coronavirus pandemic. Illinois' stay-at-home order runs through May 30. 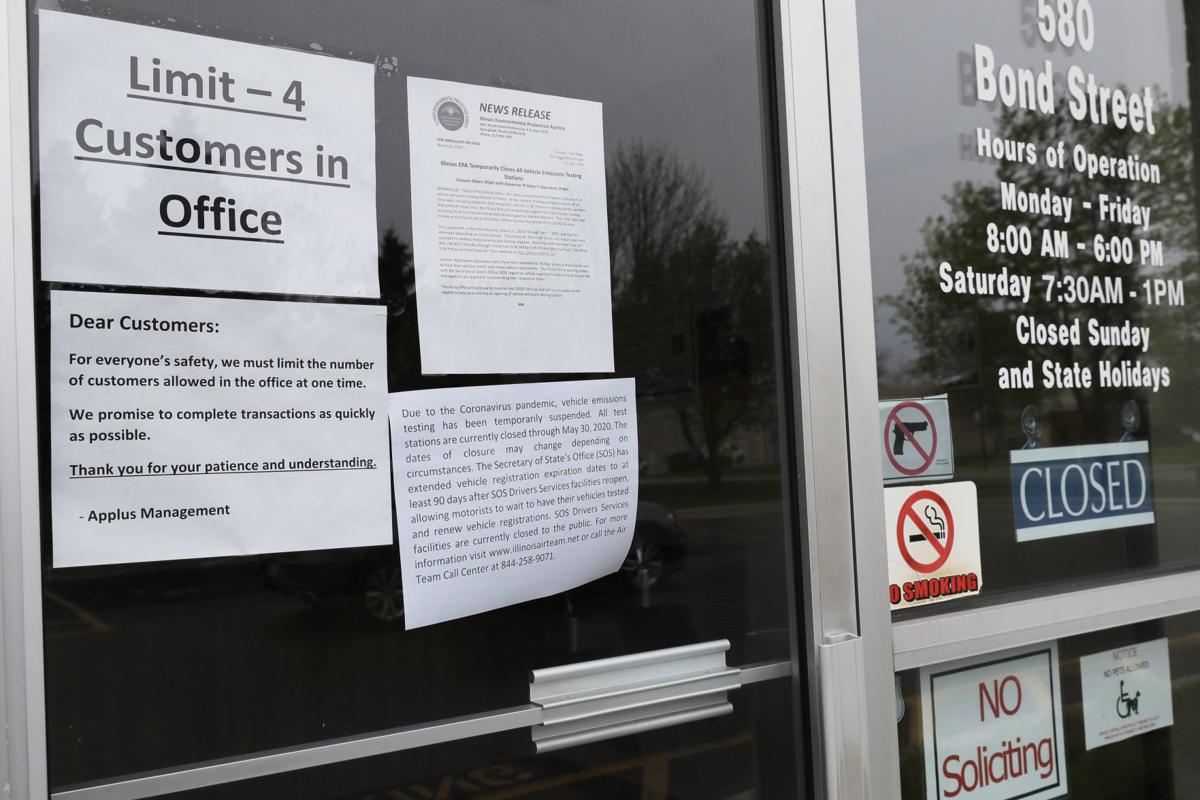 SPRINGFIELD, Ill. — Gov. J.B. Pritzker on Tuesday outlined a five-phase plan for re-opening the state as the threat from COVID-19 subsides, but there were no surprises — the speech with which people may resume former activities remains dependent on vigilance against the coronavirus.

Under pressure to show signs of a return to normalcy, the Democrat unveiled “Restore Illinois,” which indicates that the state has already entered the plan's second phase. It's defined by loosened restrictions on the governor's stay-at-home order, allowing more social interaction while wearing face coverings.

But while some states moved aggressively last week to reopen commerce and in Illinois, spring-like weather lured frustrated home-bound residents outside and into crowds, Pritzker made clear that the “Restore” plan is a long way from high gear.

“We all have a passionate desire to return to the sense of normalcy that we felt before the world knew of COVID-19," Pritzker said in Chicago. “Here’s the truth and I don’t like it any more than you do: Until we have a vaccine, or an effective treatment or enough widespread immunity that new cases fail to materialize, the option of returning to normalcy doesn’t exist.”

For the most part, the outline puts on paper the plans Pritzker has discussed in daily briefings for weeks and merely provides for those anxious to restart the economy a road map toward relief. Those looking for beginning dates to mark on calendars will be disappointed.

The phases correlate with hospital bed occupancy remaining steady, medical facilities remaining on guard for disease surges, contact tracing to map the spread of the disease well underway, and in the later stages, testing for COVID-19 must broadly available regardless of symptoms or preexisting conditions.

But the phases also apply differently to four regions of the state — northeastern, north-central, central and southern Illinois. Where there are lower rates of infection or other positive signs, a region may move into a subsequent phase ahead of a neighboring zone.

However, the plan is not one-directional. As experts predict a surge in new cases from states reopening too quickly or from a natural wave in the fall, there’s nothing preventing a region's return to an earlier phase.

“Moving backward is honestly the last thing that anyone wants to do,” Pritzker said. “But if the virus begins to attack or the healthcare systems are heading toward becoming overwhelmed in any region, swift action will need to be taken."

Pence said he spoke by telephone to Mayor Lori Lightfoot, who told him of encouraging signs in hospitalization numbers. But Pence said, “We’re watching Chicago very carefully. Chicago is still very much top of mind for us.”

Phase 1 of Pritzker's “Restore Illinois” plan, labeled “Rapid Spread,” outlines the closed schools and economy that characterized COVID-19's Illinois debut during March and April. As the speedy rise in the number of cases has entered a “Flattening” stage, Phase 2 allows some outdoor activities with the suggested social distance between people of 6 feet.

In the third phase, “Recovery,” many sectors of the economy would reopen with limits on crowd size and a continued face-covering requirement for those out in public who can't maintain 6 feet of separation.

But restaurants and bars don't start serving again until Phase 4, when travel and child care resume and schools re-open. The last phase, “Illinois Restored,” isn't ushered in until there's a vaccine or an effective treatment.

For most people, the coronavirus causes mild or moderate symptoms, such as fever and cough that clear up in two to three weeks. For some, especially older adults and people with existing health problems, it can cause more severe illness, including pneumonia and death.

Up to 90 tests a day, with results in 24 hours, will be given to all employees, an official said.

Students may be welcomed back to college campuses this fall, but onsite learning will likely look different from when students left.

Indiana is launching an online marketplace Wednesday to help reopening businesses get personal protective equipment, aiming to distribute 500,000 pieces of PPE this week.

Tuesday would have been Indiana’s primary election, but it was delayed until June 2 because of the pandemic.

A drive-thru COVID-19 testing site will be available through Saturday in Hammond, according to the Lake County Health Department.

While initial unemployment claims fell again in Indiana last week, they are still double the peak of the Great Recession.

The South Shore Line will start requiring passengers to wear a face mask Tuesday on trains and in stations.

“It was a lapse in my usual vigilance,” Holcomb said.

Police stand ready to help those struggling with addiction

For those struggling with addiction, the added stress and lack of in-person recovery support during the coronavirus pandemic can lead to relapses, said Erica Rios, the Griffith Police Department’s social worker.

The Republican State Committee has adopted temporary rules to ensure convention delegates elected June 2 decide the party's nominees for lieutenant governor and attorney general — no matter the form of the convention.

A light breeze and sunny skies welcomed shoppers to the opening day of the St. John farmers market Sunday. However, some restrictions were in place due to the COVID-19 pandemic.

A woman wears mask as she leaves a store during the coronavirus pandemic in Deerfield, Ill., Tuesday. New Illinois rules about wearing a face mask over age 2 start Friday, May 1, when they can't maintain a 6 foot social distance in public.

Phlebotomist Crystal Bovan, with Simple Laboratories, collects a nasopharyngeal swab sample to test for the coronavirus for a man at the lab's drive-thru testing site in the parking lot of St. Rosalie Catholic Parish in Harwood Heights, Chicago Friday.

A sign is seen at the Pickwick Theatre in Park Ridge, Ill., Tuesday. The cinema has been closed during the coronavirus pandemic. Illinois' stay-at-home order runs through May 30.