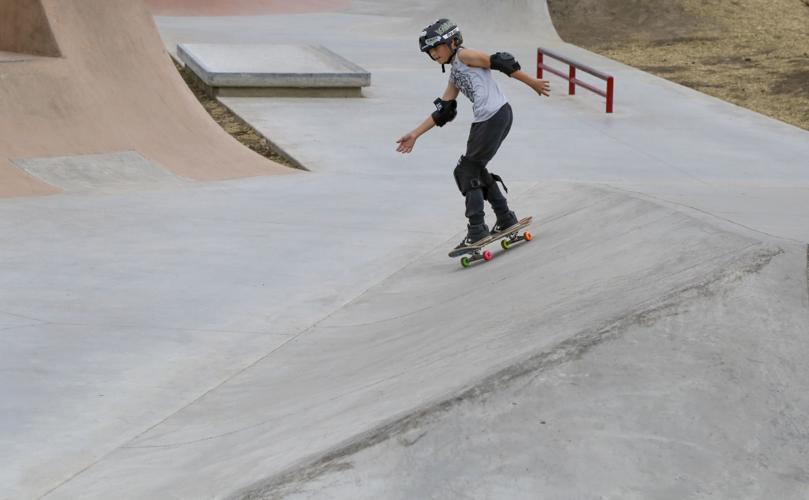 Maggie Monroe, 10, of Crown Point, competes in the rookie division of the Illiana Skateboard Circuit competition at the new skate park in Hammond's Hessville Park. 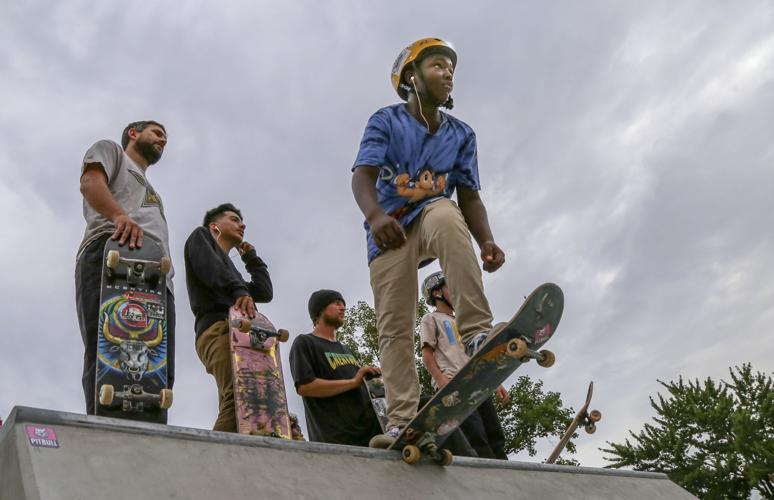 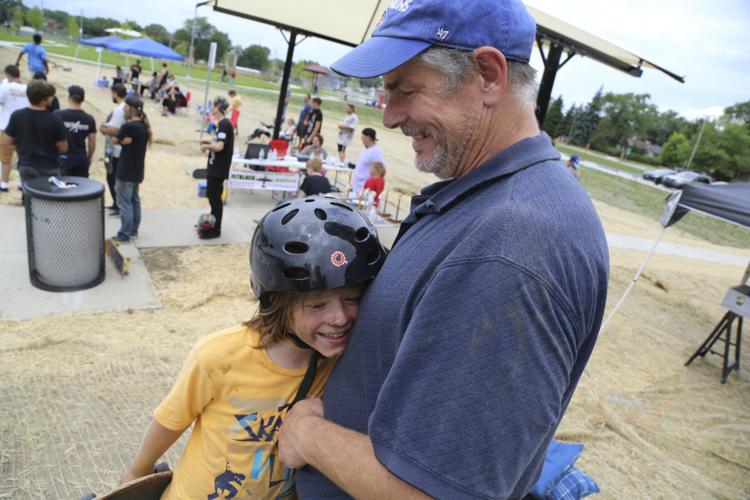 Kenneth Vitullo, 9, of Highland, gets a hug from his dad Ken Saturday at during the Illiana Skateboard Circuit competition in Hammond. 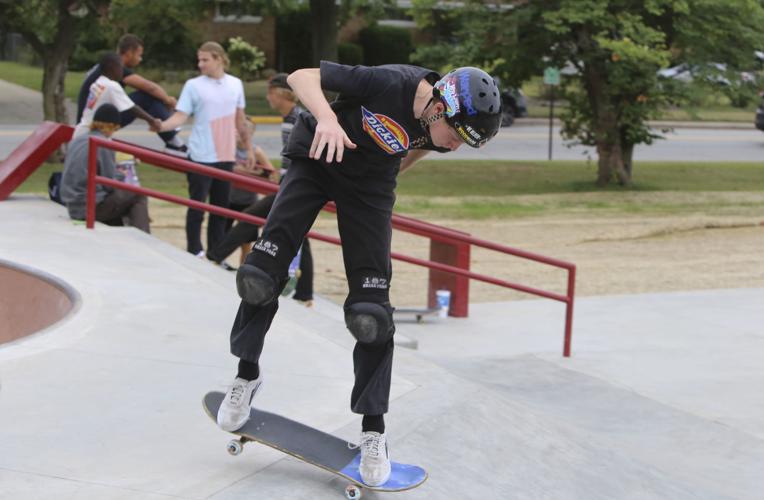 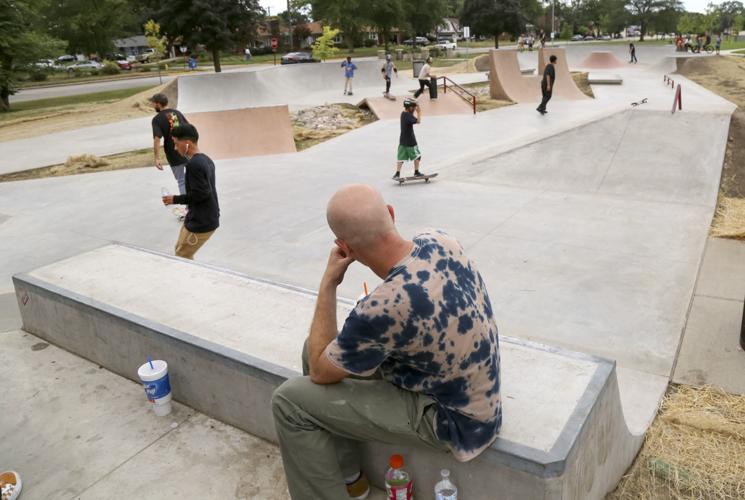 Skateboarders warn up during the Illiana Skateboard Circuit skateboard competition Saturday in Hammond at Hessville Park.

HAMMOND — Ten-year-old Maggie Munroe zipped along the dips and curves of the skate park, her rainbow skateboard and multi-colored neon wheels carrying her swiftly around the course.

As she navigated the concrete terrain of Hessville Skate Park for her first skateboard competition, she had no idea she was making history. She was the first girl to enter the competition, said Jeff Zielinski, founder of skateboard-centered nonprofit Driftwood Collective.

“I was nervous but afterwards I really had fun,” Maggie said with a bright smile.

Her mother, Terry Chapman, said Maggie has been skating for a year now and spends hours at the Crown Point Skate Park. She said Maggie designed her own board, which was covered in colorful stickers and plenty of scuff marks. Every time Chapman watches her daughter skate, she has a new trick to show off.

“She told me two years ago, 'I'm going to be a pro skater,'” Chapman said. “Her brother said, 'No you're not.' And she responded matter-of-factly, 'I'm going to do it.' ... She goes hard after whatever she puts her mind to.”

On Saturday afternoon, the Illiana Skateboarding Circuit hosted its fifth annual competition that featured rookie and seasoned skaters in the newly-built Hessville Skate Park at 173rd Street in Hammond.

Zielinski said they're conducting a five-circuit competition, where skaters compete at different parks in Northwest Indiana and Illinois. Their fifth competition is set for Sept. 21 at Asylum Skate Park in Lake Bluff, Illinois.

Zielinski said there were 16 rookies and 25 advanced skaters who competed in their respective divisions. He said it's an all-ages event, with skaters from 8 years old to people in their 30s. Winners were awarded gold, silver and bronze painted hammers mounted on stands. He said it was a play off the skater expression, “putting the hammer down,” referencing when someone lands their best tricks.

He said all of the funds raised from the competition will go toward each skate park for maintenance and construction.

“We want to give back to each park and make sure this lives on forever,” Zielinski said. “We want to make our skate parks last.”

Zielinski said he's lived in a variety of Region communities, including Schererville, Hammond, Cedar Lake and Lansing. As a skater for 17 years, he has encountered skate parks that are well-kept, dilapidated ones and areas entirely void of skate spots.

“It's the reason Driftwood was first founded,” Zileinski said. “I saw a lot of skate parks were falling apart. As we talked to towns and cities about improving them, we found an enormous amount of support.”

The first time Driftwood Collective hosted the competition, hoards of skaters showed up, boards in hand and ready to roll.

“One hundred people showed up for the first one, that's when we knew we had something,” Zielinski said. “We knew it was going to be a hit.”

Behavior and Learning Solutions in Merrillville sponsored food and water for the event, owner and program director Jill Revere said.

Zielinski said its important for businesses and communities to support their local skaters.

“The skate park is accessible to all and is free,” Zielinski said. “Everyone needs an outlet and its important to have a hobby and something to look forward to. That way, people won't look to drugs and alcohol. I would love to see some of these kids taking it as far as they can go and making it into a career. That would be awesome.”

Bulldog Park makes a splash in first year on the scene

Bulldog Park is the place to be.

HAMMOND — The city’s newest skate park hasn’t even had its grand opening yet, but it’s already being praised as potentially one of the top pre…

The outdoor, concrete park is expected to be larger than the city's existing facility, coming in at 10,000 to 12,000 square feet.

After accepting bids for the city's new skate park during its early August meeting, the Board of Works is asking bidders to go back to the drawing board.

North Korea deploys army as WHO expressed ‘concern’ over COVID

North Korea deploys army as WHO expressed ‘concern’ over COVID

Maggie Monroe, 10, of Crown Point, competes in the rookie division of the Illiana Skateboard Circuit competition at the new skate park in Hammond's Hessville Park.

Kenneth Vitullo, 9, of Highland, gets a hug from his dad Ken Saturday at during the Illiana Skateboard Circuit competition in Hammond.

Skateboarders warn up during the Illiana Skateboard Circuit skateboard competition Saturday in Hammond at Hessville Park.