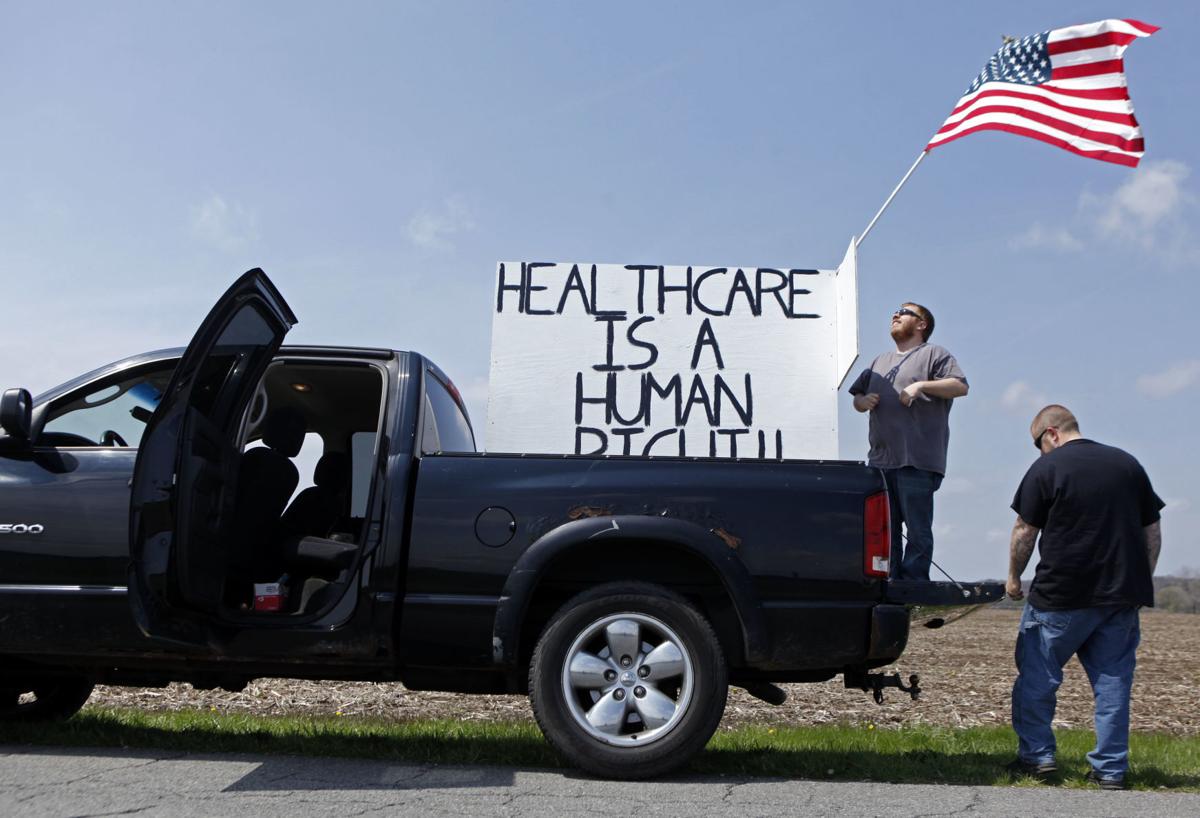 Nick Fogarty, left, and his brother, Adam, both of Michigan City, attach an American flag to their protest sign on their truck Tuesday before a drive-by procession circling Westville Correctional Facility. The brothers' father, Norm, is an inmate at the facility. 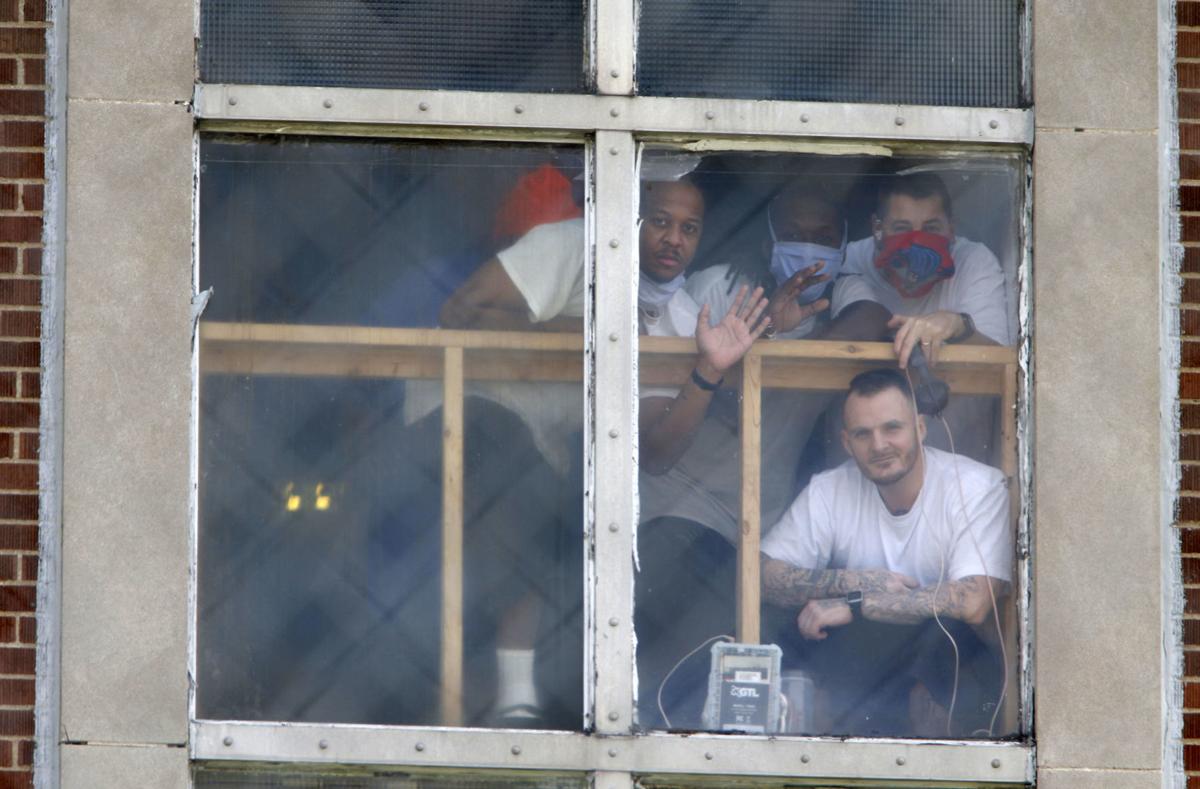 Westville Correctional Facility inmates wave to protesters from a window on Tuesday. Organizers drove around the facility to protest conditions as the facility is dealing with a coronavirus outbreak. More than 120 cases have been reported, according to the LaPorte County Health Dept. 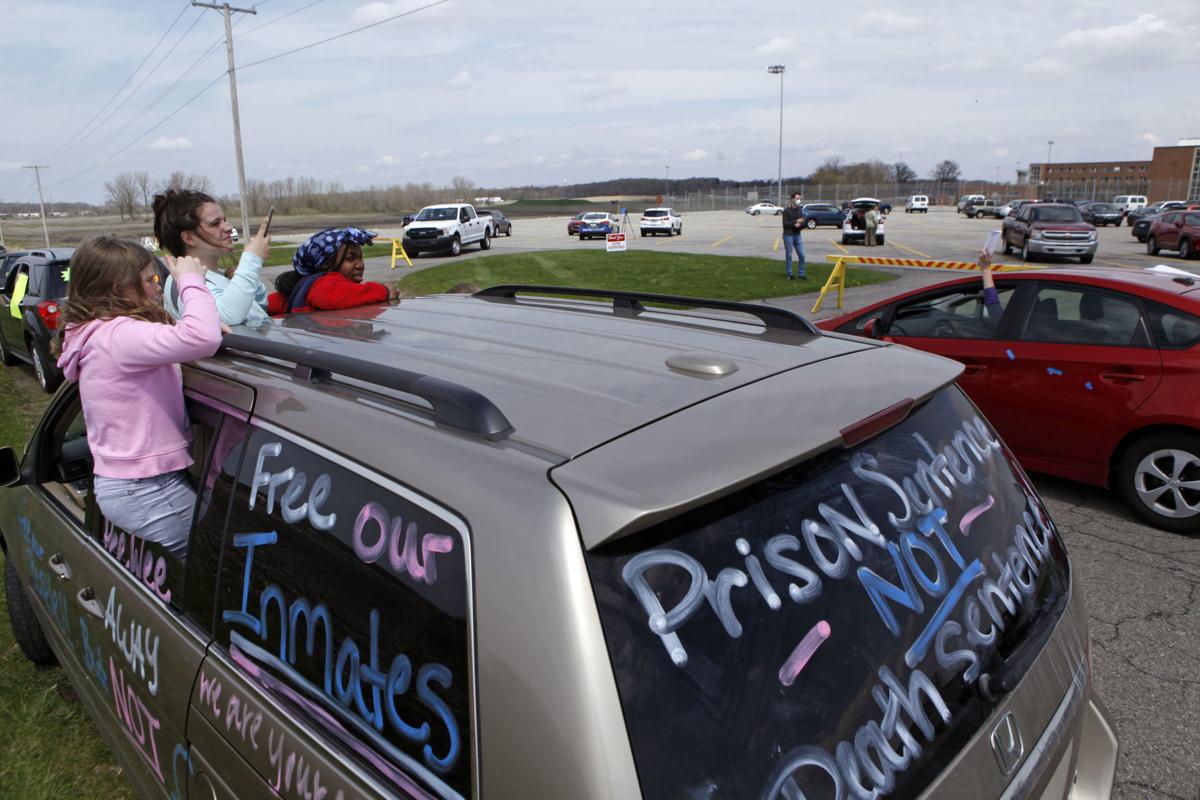 Protesters record on their cellphones Tuesday outside the Westville Correctional Facility as vehicles circle the compound. 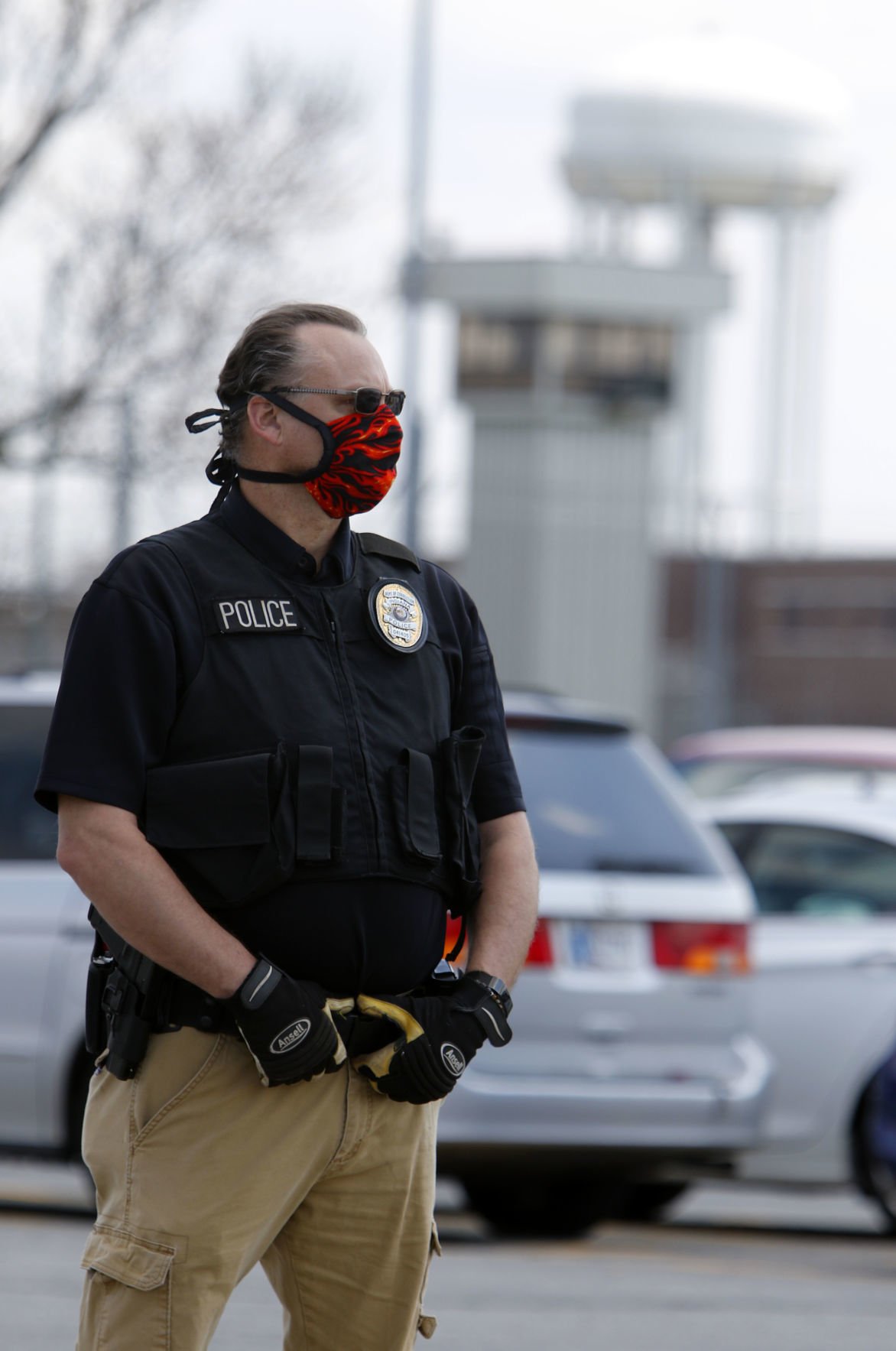 A law enforcement officer stands outside the main entrance of the Westville Correctional Facility on Tuesday as protesters circle the compound in vehicles. 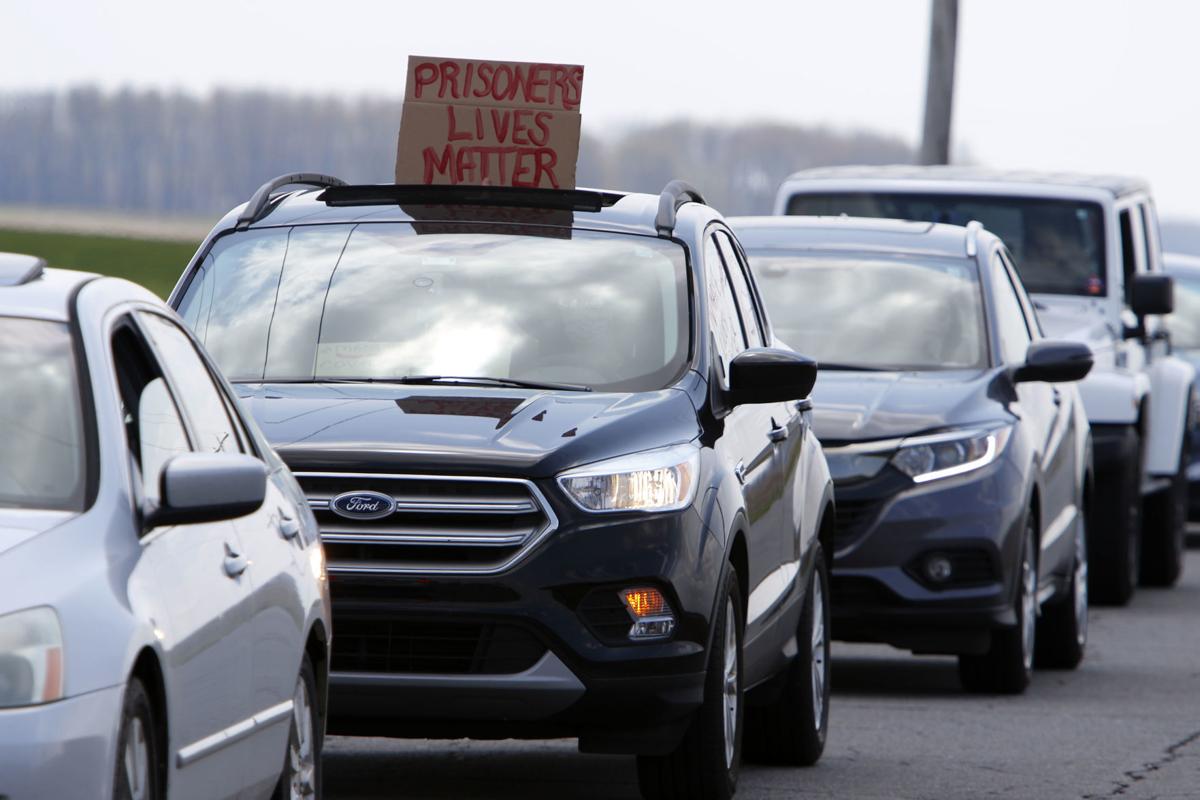 Vehicles involved in a mobile protest travel on County Road S 1100 West near the Westville Correctional Facility on Tuesday.

WESTVILLE — Misty Weikel drove from Lafayette to the Westville Correctional Facility on Tuesday to take part in a drive-by protest to shed light on what she and the others claim to be ongoing mistreatment of inmates, heightened by the COVID-19 outbreak within the prison walls.

“I’m here trying to get justice for all the inmates up here,” she said from inside her car.

A sign taped to her car read, “Praying for inmates and guards.”

Other vehicles circling the prison and honking horns also carried signs. Shouting and clapping could be heard from inside the prison during the protest and individuals were visible at several windows.

A man speaking from her cellphone that Weikel claimed to be her brother inside the nearby prison said, “We don’t have proper cleaning supplies.”

The man said he and fellow inmates also are only being served cold sack lunches and are on lockdown.

“People don’t want to be locked down because of the coronavirus,” he said.

Inmates are avoiding telling guards when they develop coronavirus-type symptoms because they fear being placed with those already testing positive for the virus, he said.

What he would like to see are inmates released to house arrest or probation if they have only a short amount of time left to serve.

Dave Bursten, chief communications officer with the Indiana Department of Correction, placed the number of vehicles taking part in the protest at more than 70, but disputed claims of improper handling of inmates, particularly during the outbreak of COVID-19 among the detainees and correctional officers.

All but about 50 of the prison's 3,100 inmates are given the privilege of electronic tablets, and all hourly and other restrictions have been lifted to allow greater access to their loved ones during the outbreak, he said.

The IDOC has also made 50,000 masks and has provided one to each inmate.

The prison continues to test inmates exhibiting coronavirus-type symptoms as defined by the Centers for Disease Control and Prevention and is segregate ailing inmates, Bursten said.

The Westville facility in LaPorte County has far outpaced other prisons around the state in the number of coronavirus cases. The IDOC reported Tuesday 143 positive tests among inmates and 36 among correctional officers.

Bursten said the virus has been most fatal among correctional officers with two of the 6,000 dying, as compared to five on the 27,000 inmates statewide.

Carla Conley, who drove in from Elkhart County for the protest to speak out on behalf of her husband and his fellow detainees, said COVID-19 is just the latest problem facing inmates at Westville.

"This is not a new thing," she said of the reports of inmates being put at unnecessary risk and even undergoing abuse.

Michigan City resident Earlene Lemons said her son was falsely accused of being part of a recent inmate uprising at the prison and was placed in "the hole," which causes her great concern because he is recovering from cancer, which places him at high risk of complications from COVID-19.

Doug Sanders said he drove in for the protest from Elkhart on a motorcycle because he has not heard from his father for three weeks, as compared twice weekly, and has heard reports he is ill.

Unable to get answers over the phone because of concerns about his identification, Sanders intended to walk up the prison doors to see if he could get answers in person.

Porter County has a record of 98 people recovering from the virus and 15 hospitalized.

Protesters will stay inside their vehicles, which will be decorated with signs, and drive around the prison, praying for those inside, the even organizers said.

A fleet of medical students has been vital in Detroit’s response to the coronavirus and the sometimes deadly COVID-19.

The Indiana Supreme Court last week extended its order granting relief to lower courts during the coronavirus pandemic and required judges to seek permission if they planned to resume jury trials before June 1.

To ride for free, medical personnel need only present a valid work identification that shows they are employed at a hospital, doctor’s office, medical facility or local fire department.

The juvenile jumped into the woman's vehicle while she was delivering newspapers and pulled away, causing her to fall to the ground, police said.

Boeing to cut 10% of workforce as 1Q revenue, profit slide

Boeing is cutting about 10% of its work force and slowing production of planes to deal with a downturn in business that started with the grounding of its best-selling jet and has accelerated because of the coronavirus pandemic.

The fire department's union president said he is concerned about the city bringing back firefighters prematurely. But the city says they are following federal Centers for Disease Control and Prevention guidelines.

The deals were suspended amid reports the company's founder once belonged to a white supremacist group and was involved in a drive-by shooting on a synagogue.

Nick Fogarty, left, and his brother, Adam, both of Michigan City, attach an American flag to their protest sign on their truck Tuesday before a drive-by procession circling Westville Correctional Facility. The brothers' father, Norm, is an inmate at the facility.

Westville Correctional Facility inmates wave to protesters from a window on Tuesday. Organizers drove around the facility to protest conditions as the facility is dealing with a coronavirus outbreak. More than 120 cases have been reported, according to the LaPorte County Health Dept.

Protesters record on their cellphones Tuesday outside the Westville Correctional Facility as vehicles circle the compound.

A law enforcement officer stands outside the main entrance of the Westville Correctional Facility on Tuesday as protesters circle the compound in vehicles.

Vehicles involved in a mobile protest travel on County Road S 1100 West near the Westville Correctional Facility on Tuesday.