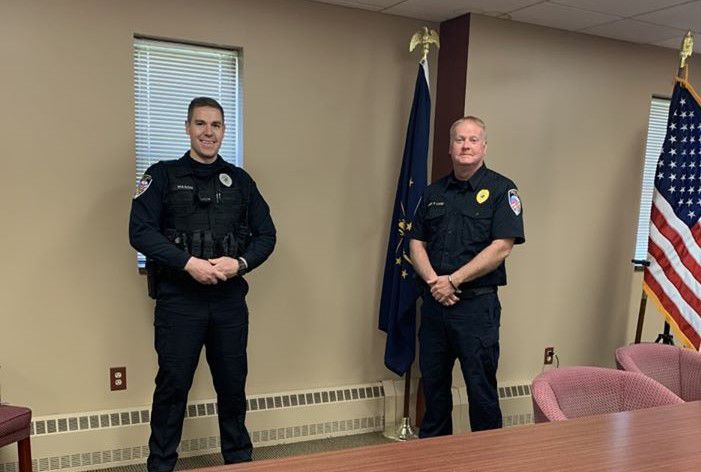 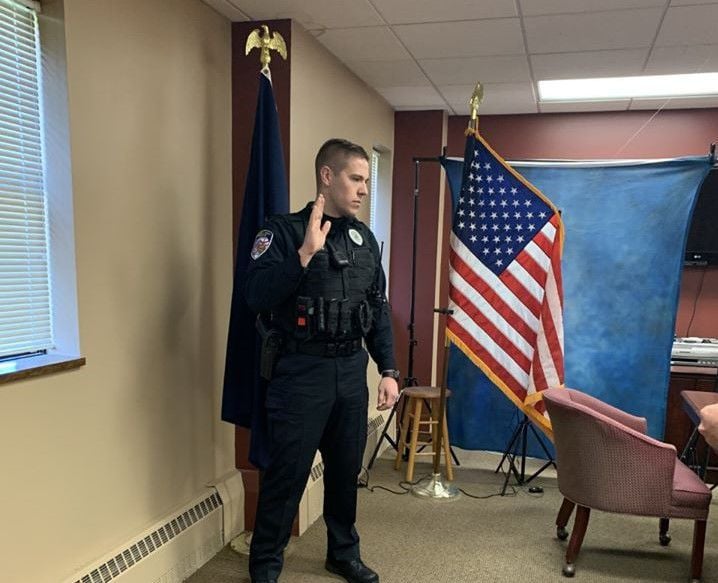 Crown Point Police Officer Philip Mason takes the oath of office during a Zoom meeting on Wednesday. Mason was the first officer in the city's history to be sworn in virtually.

CROWN POINT — For the first time in city history, a Crown Point police officer took the oath of office virtually.

On Wednesday, Police Officer Philip Mason pledged to uphold the U.S. and Indiana constitutions and protect the Crown Point Community and its residents via a Zoom meeting.

"I'm just happy to serve the community I live in, and I'm excited to get my career started here," said Mason, who will serve as badge No. 114.

Mason, an Andrean High School graduate, previously served in the Patrol Division with the Merrillville Police Department. He is a 2015 graduate from the Indiana Law Enforcement Academy.

Crown Point Mayor David Uran said Mason is the "very first" officer in the city's history to be sworn in virtually.

Uran said the city chose to continue with the oath of office despite a "unique and different" situation.

The oath of office normally takes place in the City Council chambers at City Hall, with department heads, city officials and family members present. However, the Centers for Disease Control and Prevention has restricted gatherings to 10 people or less to help prevent the spread of COVID-19.

"We are still going to move forward because we understand having first responders and having a full working staff is important," Uran said during the virtual meeting.

Starting this week, city officials are inviting residents to deck their front lawns with spring and Easter cheer — similar to the Christmastime Tour of Lights.

A new organization built on positivity quickly has emerged in recent weeks to help strengthen the community during the COVID-19 pandemic.

The coronavirus pandemic has changed the way many people are working, but it hasn't slowed government business in Crown Point.

Luke Britt, the state's public access counselor, said he's taking phone calls on a daily basis about how governments should operate under a new, temporary norm where virtual meetings are fair game.

Crown Point Police Officer Philip Mason takes the oath of office during a Zoom meeting on Wednesday. Mason was the first officer in the city's history to be sworn in virtually.