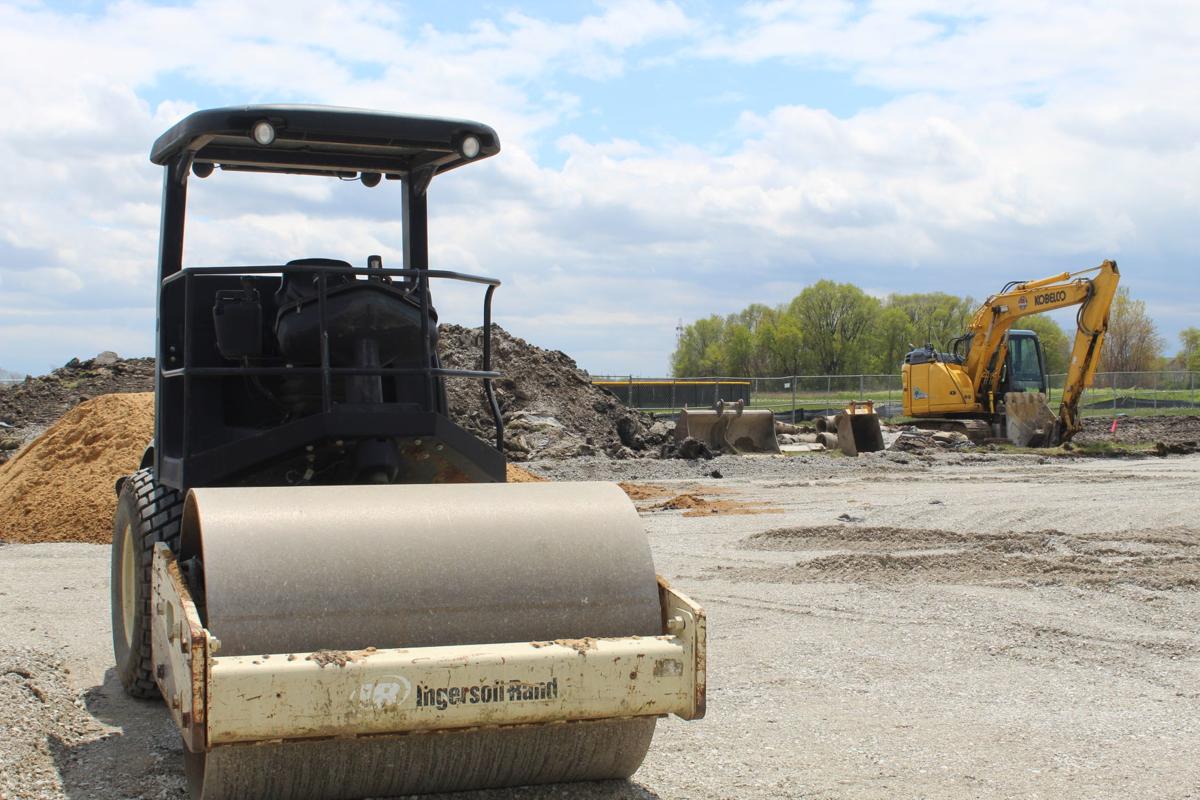 Machinery sits at the site of the new Dyer Fire Department Fire Station No. 2 along 213th Street in Dyer on Monday. The project broke ground on Monday, and is expected to wrap up in December. 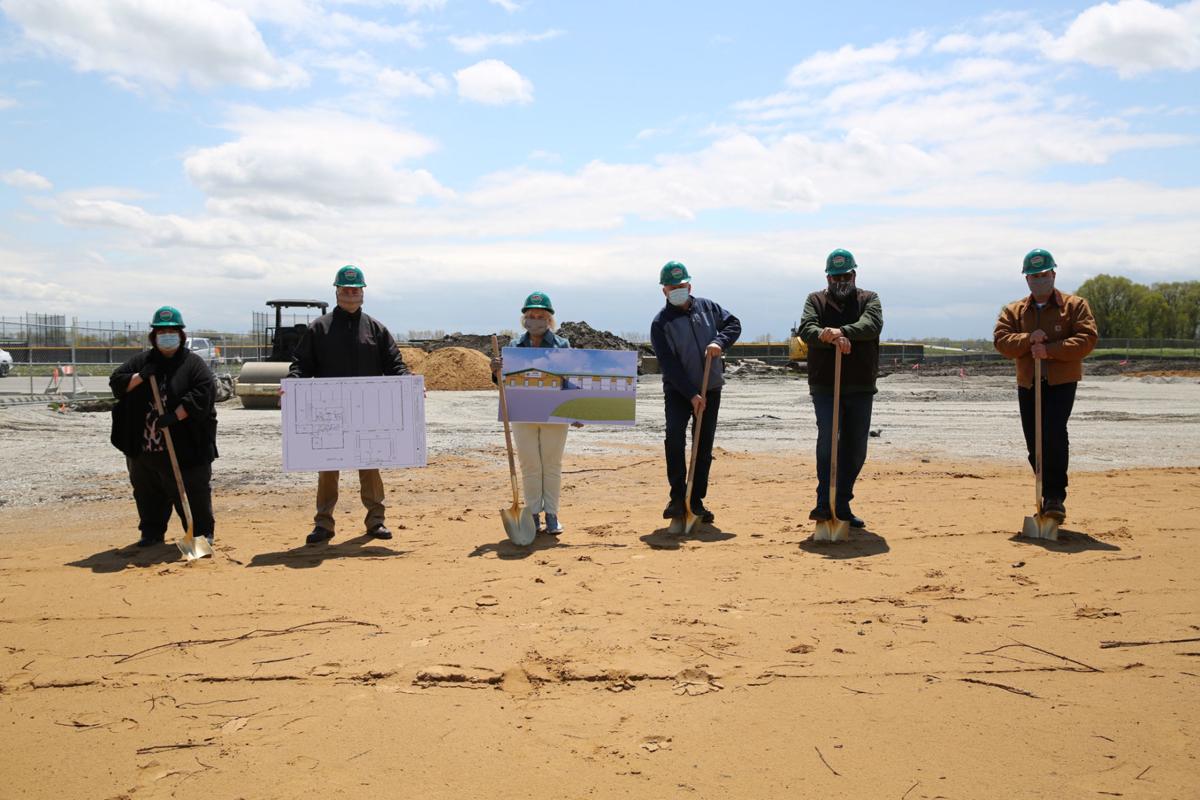 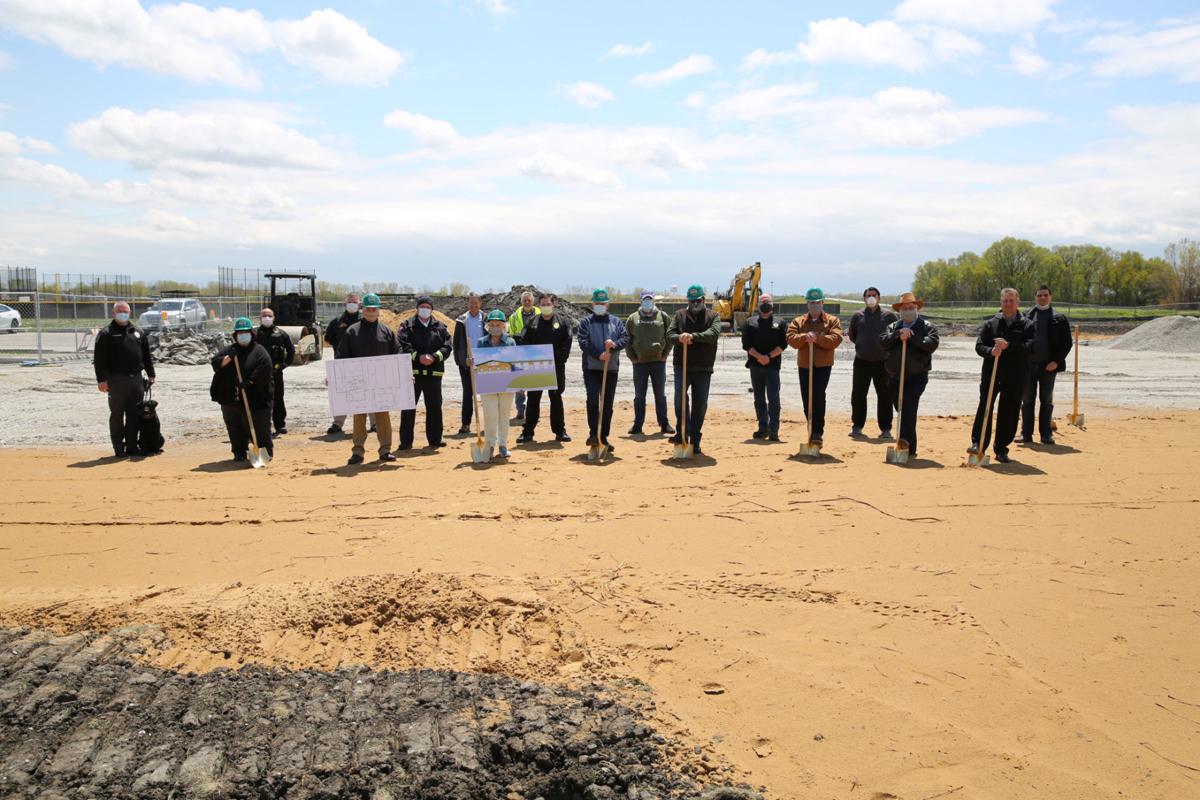 Dyer town officials stands with employees with Hasse Construction Company and CSK Architects on Monday at the groundbreaking for the town's new fire station.

DYER — A sunny sky and warm temperatures accompanied the groundbreaking of the town's new fire station along 213th Street on Monday.

The 10,500-square-foot facility will serve the town's fire, police and park departments, and is expected to be complete in December, said Town Manager Tom DeGiulio.

The police and parks departments will have small offices inside the building and the fire station will have a day room, along with office space throughout. All three will have access to an upstairs mezzanine for storage.

The project has been years in the making, with officials including it in a bond issue in 2015, with hopes of completing the project in 2016, DeGiulio said.

However, the new building is bigger than the existing Dyer Fire Department Station No. 2 at 820 213th St.

So, the town began looking for a new home, DeGiulio said.

"Originally it was supposed to be in the park and then people were concerned about that, so they abandoned that, but it came back to this is still the best location for the fire department, for the town," DeGiulio said.

Though the facility doesn't have an official address yet, it is across the street from Briar Ridge Country Club, near the baseball fields at Central Park.

"It's going to be very functional, and it'll fit in nicely with the park," DeGiulio said.

An emergency signal will be installed near the station that will control traffic from 213th Street and the Briar Ridge entrance and exit — a similar signal is installed on West 93rd Avenue and Civic Drive in St. John.

The fire station is the first of many projects slated for the area, with the town looking to build another ball field and a concession stand at Central Park within the next year, DeGiulio said.

"The plan is we'll have girls softball located out of North Gate into Central Park by fall of 2021," he said, adding: "There's gonna be a lot of construction going on out here over the next couple of years."

By summer 2021, DeGiulio said work on the north half of Central Park will be complete.

"We have looked at this fire station for a long time and realized that we needed to do something to improve and this just solidifies it because it incorporates not only the fire department, but the police department has something to do with it, and the park department as well," Tanis said.

Tanis added once the new station is functional, the old one will be razed. The town plans on keeping the property, she said.

Thomas Kuhn, president of CSK Architects, and Bill Hasse, president of Hasse Construction Co., said work on the site began about a week ago. Underground structures will be installed Tuesday.

The facility will be a metal building with brick masonry and will have a similar look to Dyer Fire Station No. 1 at 2150 Hart St.

There also will be a 6-foot tall fence, a rolling gate and a parking lot reserved for fire, police and parks department personnel.

Residents can expect to see a structure go up at the site in August, said Jay Thompson, project manager at Hasse Construction Company.

Town Manager Craig Phillips said if the town moves forward with any programming, it will be abbreviated, probably lasting a month.

Passersby can expect to see a shell of the new Dyer fire station along 213th Street in the coming month.

Town Manager Tom DeGiulio told The Times the town is hoping the project will be substantially complete by mid-December.

Machinery sits at the site of the new Dyer Fire Department Fire Station No. 2 along 213th Street in Dyer on Monday. The project broke ground on Monday, and is expected to wrap up in December.

Dyer town officials stands with employees with Hasse Construction Company and CSK Architects on Monday at the groundbreaking for the town's new fire station.