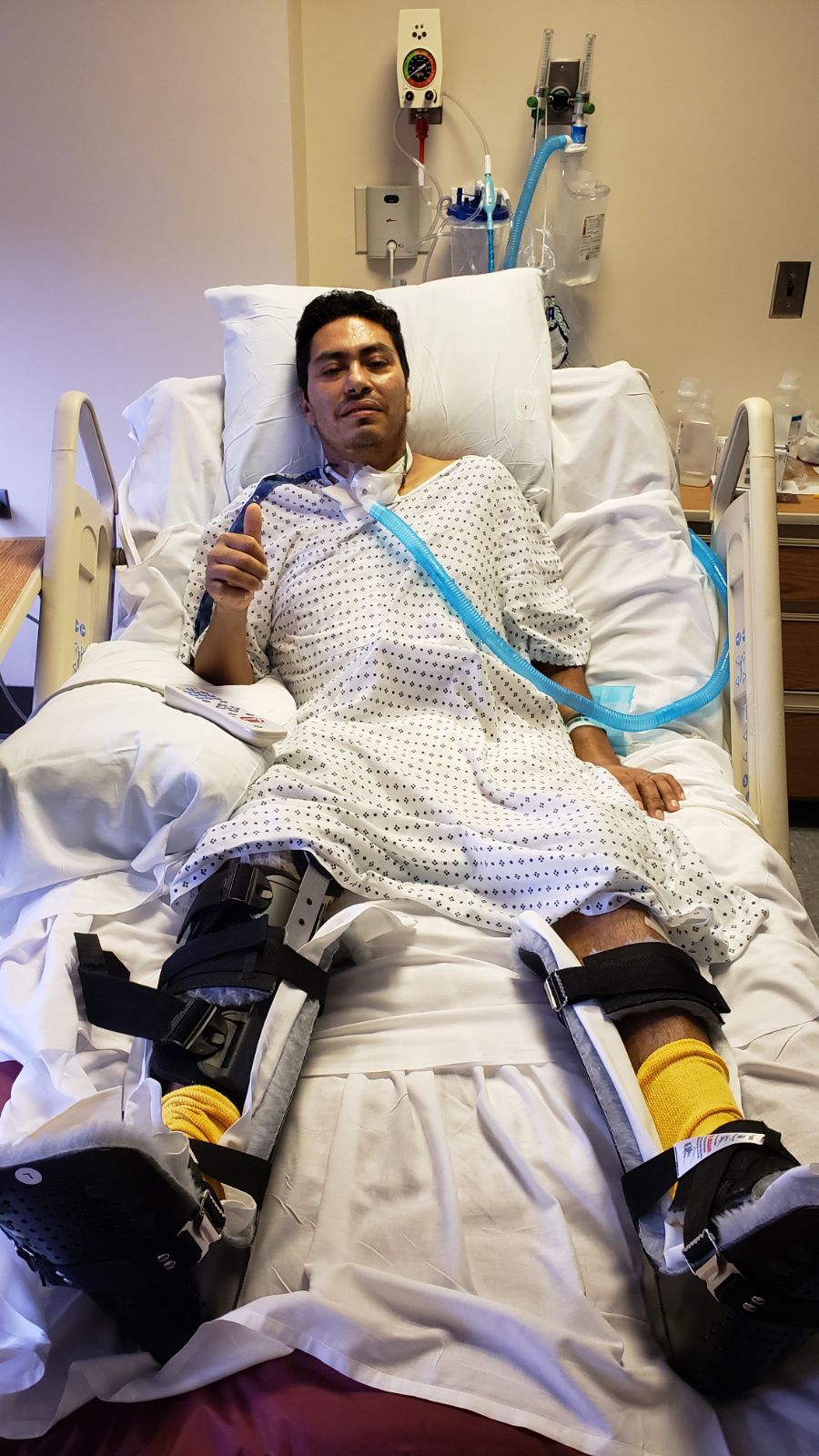 Miguel Morquecho sits up in his bed at MacNeal Hospital in Berwyn, Illinois, on Friday. 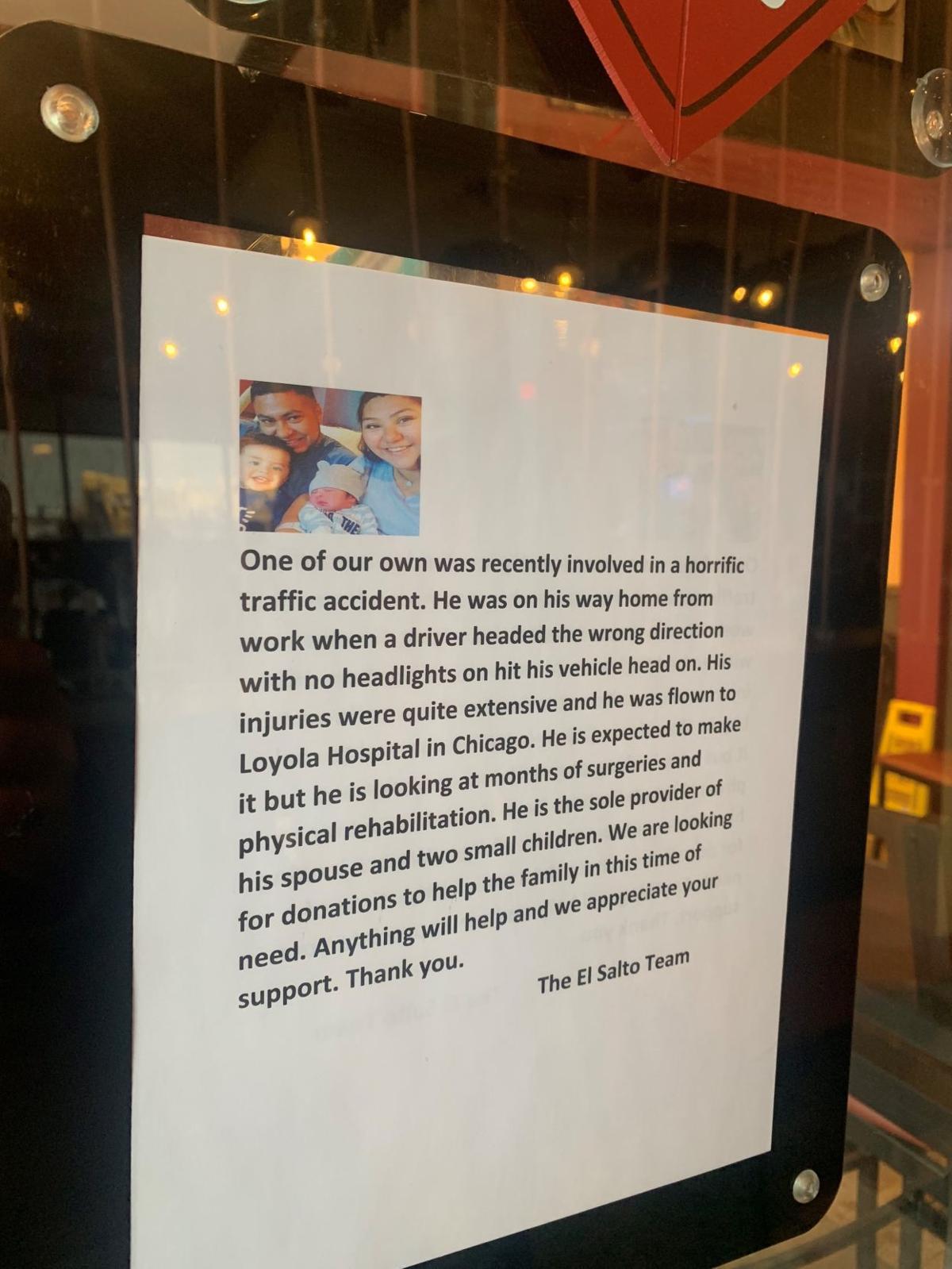 A sign at El Salto in Munster telling patrons the restaurant is accepting donations for Miguel Morquecho, who works as a cook at El Salto in Merrillville, after he was in a head-on crash.

Six weeks ago, Julie Morquecho thought she was going to be a 22-year-old widow with two sons under 2 years old after her husband, Miguel, was in a head-on crash.

Over the past few weeks, however, Miguel has improved significantly, pushing those thoughts out of her mind.

"It's been a miracle watching him go from them telling me that he was literally at the borderline of dying and (to) now seeing him eat," she said.

When Miguel first started his recovery process, it looked bleak. Julie recalls a doctor telling her after everything his body went through, she didn't think Miguel would pull through his surgery.

However, the 34-year-old Dyer man has defied those odds.

Around 11:13 p.m. Dec. 10, Miguel was leaving work when he called Julie to let her know he was on his way home — a 30-minute drive from the El Salto in Merrillville, where Miguel works as a cook.

Three minutes later, Miguel was hit by a 41-year-old woman who was driving on U.S. 30 in the wrong direction without her headlights on, in front of the Southlake Kia in Hobart, police said.

An investigation is underway to determine whether drugs or alcohol were a factor in the collision. While police did find drug paraphernalia on the scene, Hobart police Detective Sgt. Nicholas Wardrip said it has not been confirmed whether or not the driver was impaired.

However, the bruises have healed and Miguel has been transferred to MacNeal Hospital in Berwyn, Illinois, to continue the recovery process.

"It's just been amazing to see how the human body can heal itself," Julie said.

"I wasn't that big of a spiritual person, but this is literally a miracle. I thought that God's biggest present was when he blesses you with children, and you give birth, but honestly witnessing someone literally come back from being dead is the greatest miracle you could ever witness."

The road to recovery

Miguel makes progress every day, Julie said. He's been able to regain some arm strength by performing basic tasks, like washing his face, eating and drinking. He's even able sit up for a short period of time.

That wasn't the case earlier this month.

Though Miguel was stable and his bruises were starting to fade, he wasn't able to eat and flashbacks of the crash kept him on breathing support.

Julie said Miguel, who remembers every detail of the crash, would relive it over and over, causing him to hold his breath in fear.

While he is still on breathing support, Julie said his doctors are talking about taking him off after his surgery on Wednesday, which is hopefully the last one for a while, she added.

"There's still injuries in his back ... and he might not need a surgery for that," Julie said. "The doctors even told us in the long run ... that he will most likely develop early arthritis in his right knee, the one that was pretty shattered. He may need another knee replacement in the future."

However, the goal, for now, is to get through this surgery so Miguel can begin to stand and walk again.

Being able to strengthen his legs also will determine when his sons, Liam, 6 months, and Angelo, who turns 2 years old in March, will get to see their dad.

Since the crash, they've only been able to video chat with him because he is still recovering.

While there is still a long road ahead, Julie said Miguel might be able to come home in a few weeks, which will be a transition for him.

"He's always been a strong-willed, independent person," Julie said. "It's gonna be hard for him to adjust to this new (idea of), 'I need help for everything right now.'"

The support Miguel has received from the Northwest Indiana community has helped his recovery, Julie said, adding she has shown him messages from people wishing him well.

"I just hope one day I can meet some of the people and give them a hug in person and say, 'Thank you' from the bottom of our hearts because I didn't know what was going to happen out of this," she said.

"It's been amazing to really know that there are good people in the world," she added.

El Salto is still collecting money at locations across the Region to support the family as Miguel is their sole source of income.

Though the family started off 2020 with a "nightmare," Julie said she's looking toward the future.

"It's going to be a long haul, and it's going to be a really tough year," Julie said. "The best thing about it is that we'll be able to celebrate the end of the year in God's will (with) hopefully him healthy, walking, being able to be independent again."

More in ICYMI: Here are the most-read stories from the past week (3 of 30)

Father of two fights for life after head-on crash on U.S. 30

Miguel Morquecho was leaving from work on Dec. 10 when another driver collided with his vehicle head on. He has been at Loyola University Medical Center since, where he's still fighting.

Miguel Morquecho is in stable condition, but that victory didn't come without its challenges. He remains on a ventilator, and he frequently relives the crash in his head over and over.

Police say they arrested two people overnight who were suspected of breaking into cars and homes in St. John.

A woman has taken a plea deal on charges stemming from the death of her 5-year-old son in Davenport.

DUI suspect snores in back seat of squad on way to jail, cops say

The man could be heard snoring as he slept in the backseat of a squad car on the way to jail Saturday, police say.

Kids who visit now have the opportunity to check out a new, immersive play area thanks to a donation from the Birdzell family.

Miguel Morquecho sits up in his bed at MacNeal Hospital in Berwyn, Illinois, on Friday.

A sign at El Salto in Munster telling patrons the restaurant is accepting donations for Miguel Morquecho, who works as a cook at El Salto in Merrillville, after he was in a head-on crash.