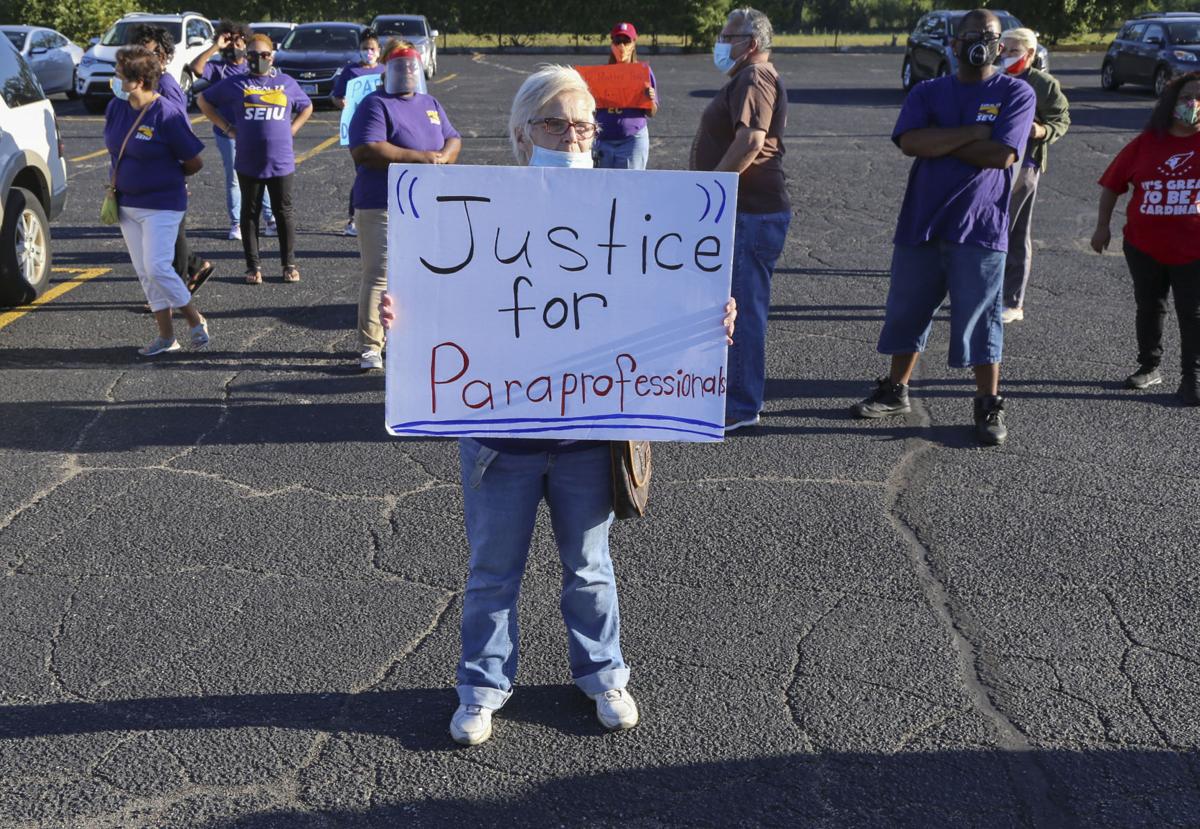 Anita Garcia, center, a retired custodian for the School City of East Chicago, joins about two dozen other school employees during a rally Thursday night outside the schools' administration building. 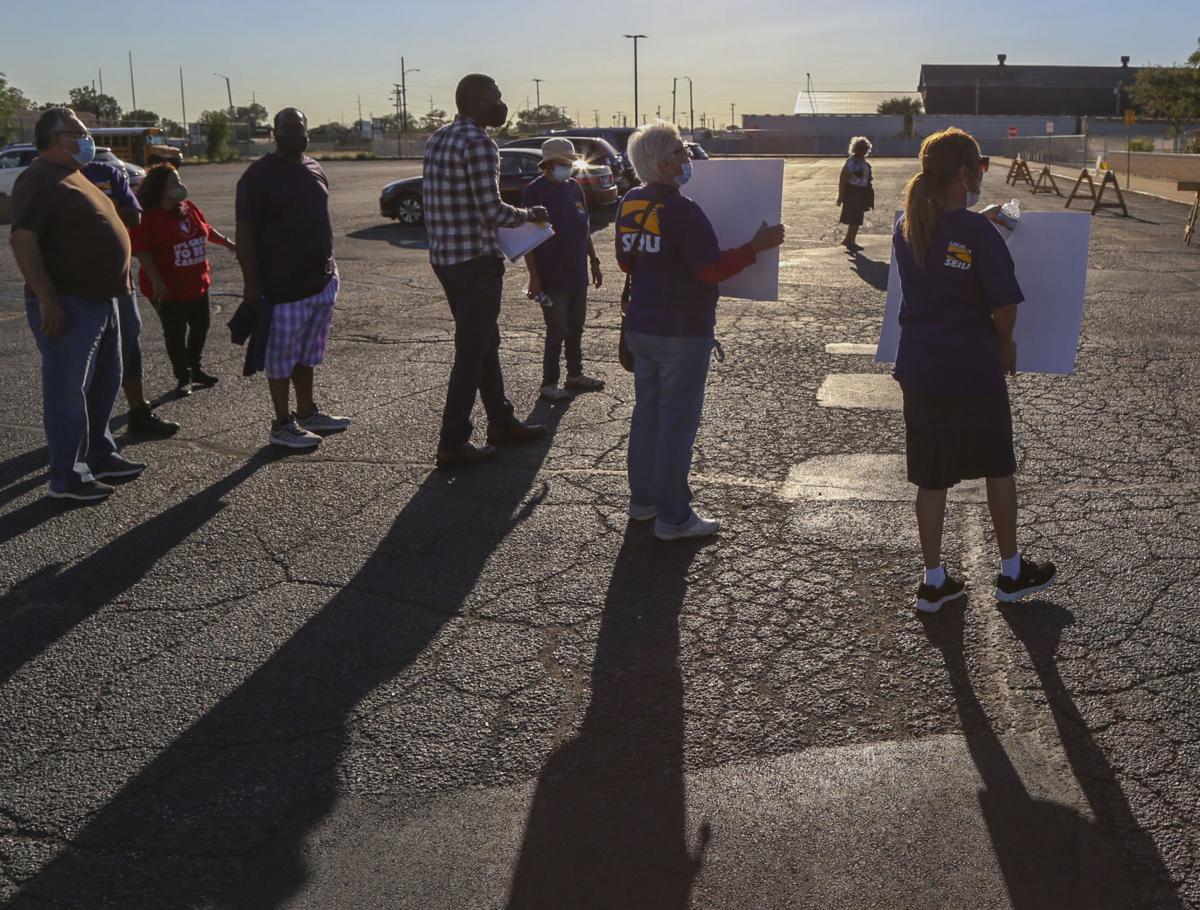 East Chicago School system employees chant as school board members enter the administration building for a meeting on Thursday. The School City of East Chicago laid off 90 workers on Aug. 21. 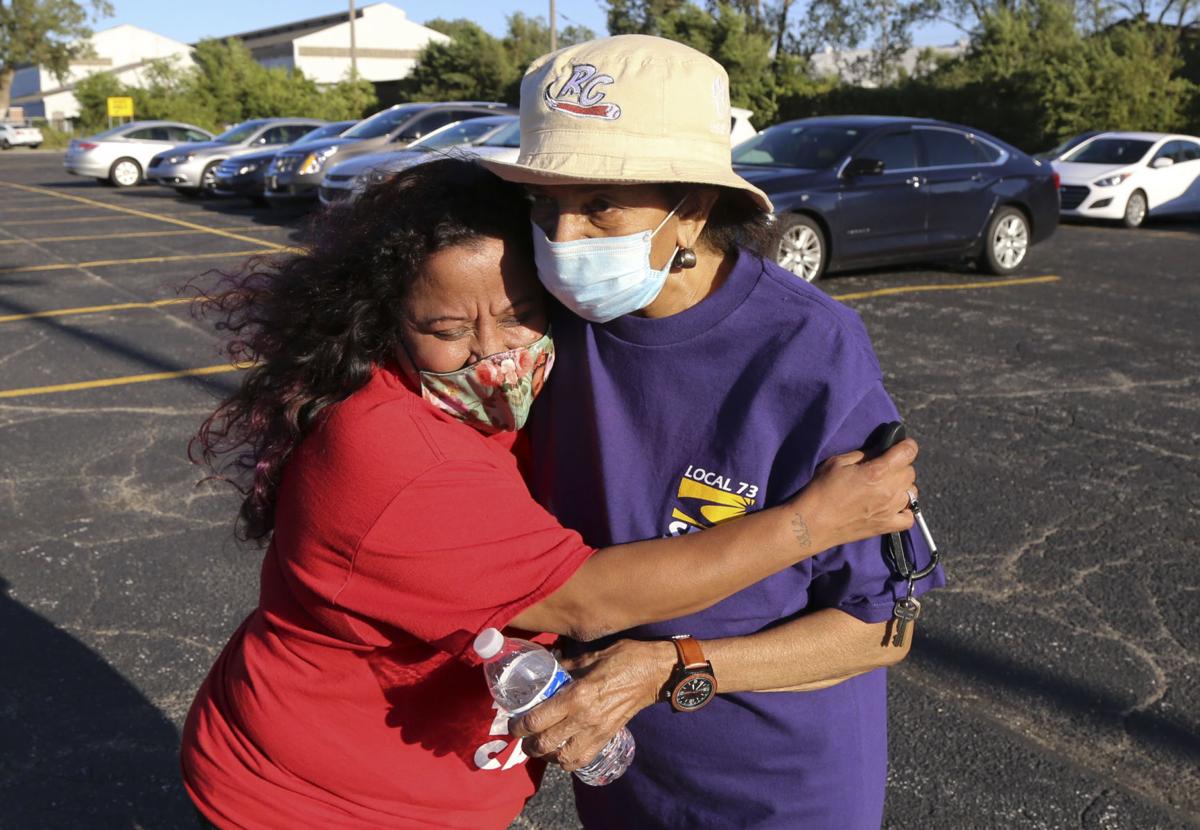 Veronica Valdiva, left, who was recently laid off from East Chicago Schools, hugs Marie Baker, president of Local 73 of the SEIU, Thursday night during a rally at the East Chicago schools administration building. 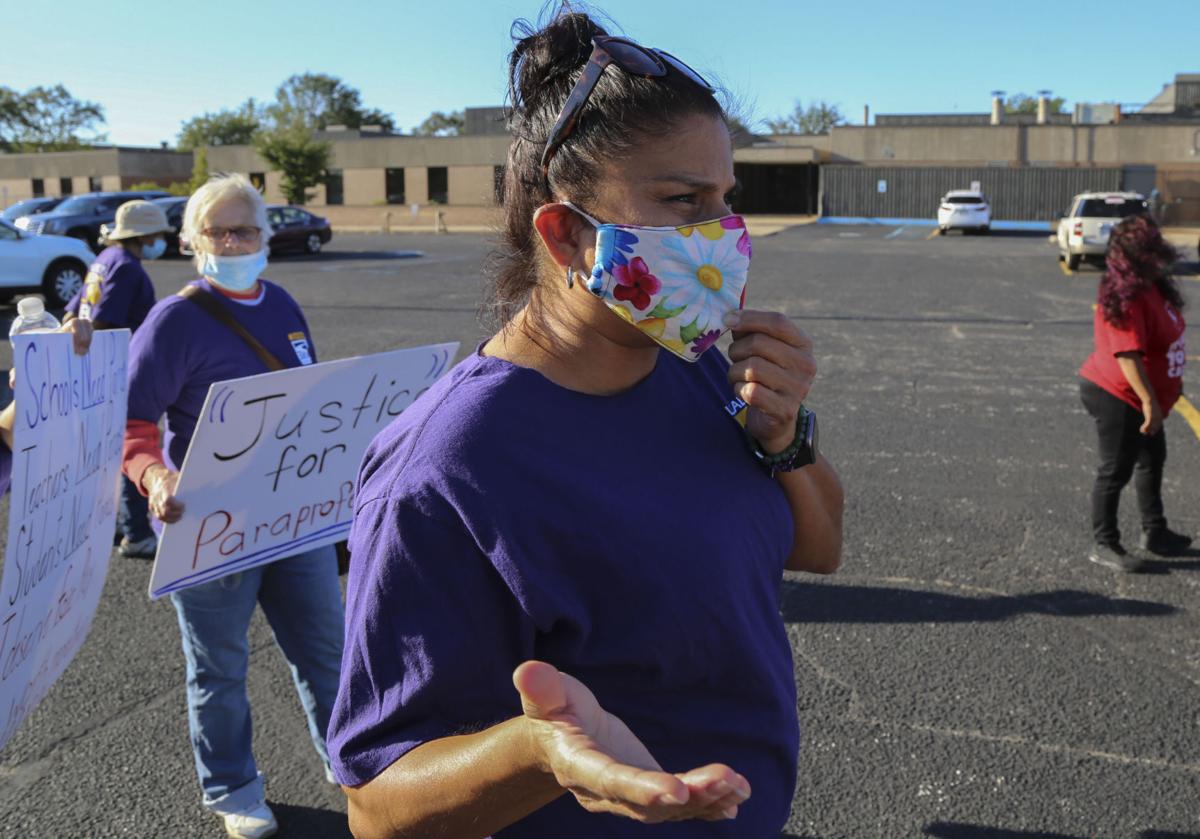 EAST CHICAGO — They worked to prepare schools and classrooms for COVID-19. Then they learned they lost their jobs.

About two dozen members of Service Employees International Union Local 73 rallied Thursday outside the School City of East Chicago Administration Building to get their jobs back.

“They don’t treat us right. They’re always unfair,” said Juanita Espinosa Guillen, chief steward for SEIU Local 73 and a laid-off paraprofessional, or para, at McKinley Elementary. “We want to stand up for our people. They’re doing things that are just not right.”

Superintendent Dee-Etta Wright said at that time that the layoffs were intended to be temporary while the school district engages in e-learning, or virtual classrooms, for the first nine weeks of the 2020-21 school year.

Local officials were also waiting on word about possible funding reductions due to e-learning from the State Board of Education. Earlier this week, the state board approved a resolution cleaning up some e-learning wording and clarifying funding.

The SBOE voted Sept. 2 that every student attending classes in person during the previous school year will still generate 100% of state tuition support this year, regardless of how that instruction is being delivered, on ADM (average daily membership) day. This year ADM day will remain Sept. 18.

That current form of instruction, the SBOE voted, includes virtual learning, which the state defines as “instruction provided in an interactive environment, in which the student is separated from a teacher by time or space.”

Marie Baker, president of Local 73, said the union wants full-time status for its members. “Since we’re part-time, they can do what they want with us,” said Baker, 91, a paraprofessional for 33 years, currently at Lincoln Elementary.

Baker considers herself and other paraprofessionals as teachers in their own right.

Guillen added, “All the layoffs affect everyone — clerks, custodians, secretaries, paraprofessionals. It’s all of us.”

Some at the rally also addressed the need for higher wages.

“It’s a shame that, as a school system, we employ people who cannot make a living wage,” said Christina Garcia, a laid-off English language learner paraprofessional at Block Middle School.

Keith Cleveland, a laid-off custodian after 20 years at multiple buildings and a union steward, noted, “I don’t think they did (the layoffs) properly. They laid off too many people. They’ve got people working overtime, going from building to building.”

Veronica Valdivia, a custodian/acting supervisor with 10 years experience, was among the layoffs. “It’s really sad,” she said. “Everyone pulled their weight and did their jobs. We worked until the end and did not have any idea about the layoffs.”

The alleged shooter, who was apprehended on scene when police arrived, "indicated he was responsible for the actions," police said.

The boy, who was taken to the Porter County Juvenile Detention Center, is charged under the new law of offense against a computer user, Valparaiso police Capt. Joe Hall said.

"(The alleged victim) stated Felicia (Williamson) only gets like this when she has been drinking 'fireball,' " according to the incident report.

The woman told police she was in her home with her cousin, her cousin's boyfriend and the defendant, her friend of 10 years, court records state.

Man had blood alcohol content of 0.27 after crash killed Winfield man, injured 2 others

Victim Julian Tinoco's mother is asking anyone who was affected by her son's death or has an opinion on what sentence the defendant should receive to write a letter to Judge Diane Boswell.

Because of the pandemic, the public will not be allowed inside. Two seats are being set aside for the media to represent the public.

The couple is accused of stealing as much at $160,000 from the organization by withdrawing cash from its accounts, buying airline tickets, gift cards and jewelry, and paying for remodeling work at their home.

Watch Now: Can the Supreme Court be expanded?

Boris Johnson: This is the moment when we must act

Boris Johnson: This is the moment when we must act

Anita Garcia, center, a retired custodian for the School City of East Chicago, joins about two dozen other school employees during a rally Thursday night outside the schools' administration building.

East Chicago School system employees chant as school board members enter the administration building for a meeting on Thursday. The School City of East Chicago laid off 90 workers on Aug. 21.

Veronica Valdiva, left, who was recently laid off from East Chicago Schools, hugs Marie Baker, president of Local 73 of the SEIU, Thursday night during a rally at the East Chicago schools administration building.