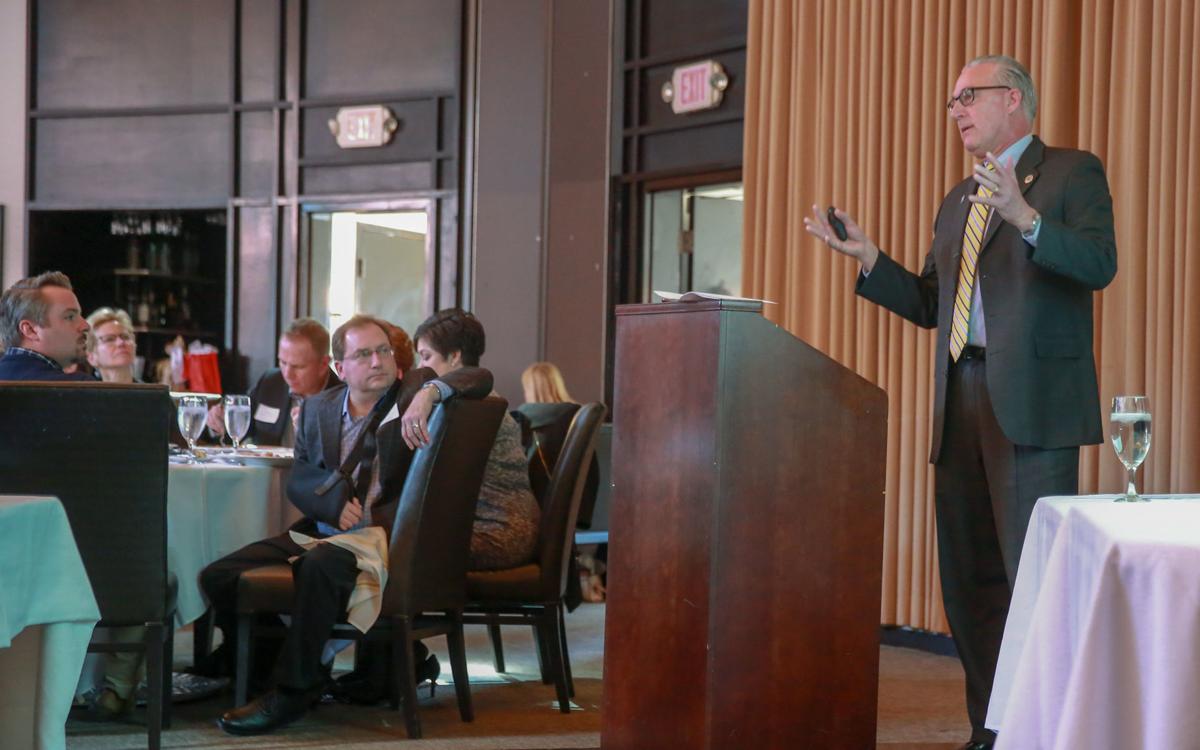 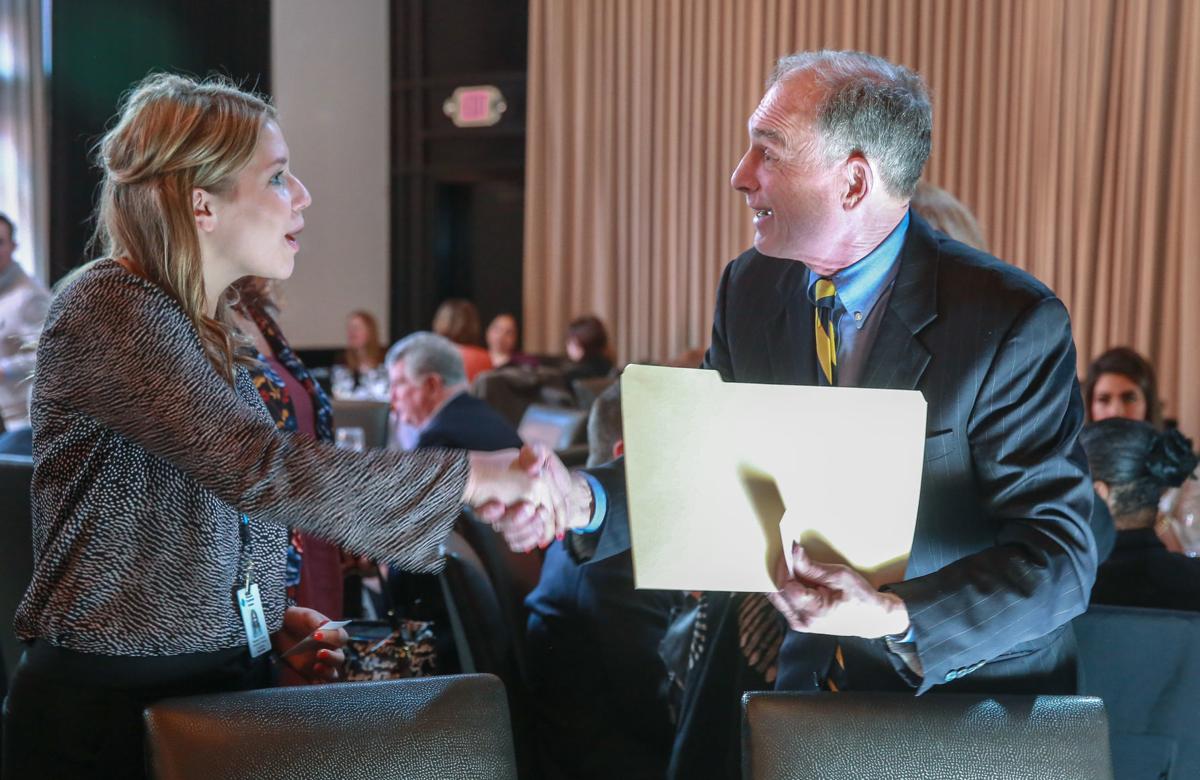 MERRILLVILLE — The town of Merrillville has positioned itself well as the crossroads of the Region with its pro economic development and job creation stance, Town Councilman Shawn Pettit said.

To better deal with economic issues, he said he wouldn't rule out the town of 35,322 residents taking on city status in the future. Residents have twice rejected a referendum - in 1999 and 2002 - to switch Merrillville from town to city status.

"I've always been in favor of it...It's easier for a city to deal with economic issues. Look what's going on in Crown Point," Pettit said, noting its city status and mayoral rule.

Pettit addressed the health of the town at a Tuesday luncheon hosted by the Crossroads Regional Chamber of Commerce at Gamba Ristorante.

U.S. Rep. Pete Visclosky, D-Gary, provided highlights of several projects he had championed in Northwest Indiana during the past year during his address.

He received a round of applause when he mentioned the Indiana Dunes National Lakeshore's recent new designation as a national park.

"The primary purpose is to draw interest to our natural resources," Visclosky said.

The Indiana Dunes National Park will be included in the next national park listing as the 61st park. Visclosky is confident that will bring visitors to the Region.

The FTA's medium-high rating was revealed in the Department of Transportation's annual report on the Capital Investment Grant program. The grant for West Lake would cover nearly half the construction cost of $764 million, and a similar proportion of early financing costs of $127 million.

There was also lots of good economic news in Merrillville during the past year, Pettit said.

Pettit highlighted a number of commercial projects, including the purchase of the former Merrillville Off-Track Betting site at 7610 Broadway by Manvee Real Estate Indiana.

The building, with an estimated initial investment of $1.5 million, was converted into a wholesale bakery that makes and distributes baked goods to numerous Dunkin' Donuts locations.

Other big projects included the opening last April of Home 2 Suites by Hilton near Interstate 65 and U.S. 30 and the breaking of ground last year for WoodSprings Suites, a 4-story, extended stay hotel at 1500 E. 83rd Ave.

One of the more visible projects was the $1.2 million demolition of the former Radisson/Star Plaza and Twin Towers at I-65 and U.S. 30.

The town is still waiting to talk to White Lodging officials and the future of the site remains unknown, Pettit said.

"We're optimistic about what they will come up with," Pettit said.

White Lodging had last year pitched the $356 million The Farm at Crossroad Commons, a walkable town square-like development with a meeting and event center, four hotels, an office building, an underground parking garage, a townhouse, condos, two restaurants, a craft brewery and distillery, an art gallery, a visitors center, a greenhouse, a horse riding arena and 24,000-square feet of outdoor space.

Pettit also praised the work of town officials, including Merrillville Police Chief Joseph Petruch, who heads up a department of 60 fellow officers.

Crime has declined in all areas in Merrillville, he said.

Pettit also lauded the work of Merrillville Town Manager Bruce Spires who is retiring from that position in August.

"We are sorry to see him go," Pettit said.

The Indiana Dunes National Park and Indiana Landmarks are planning an architecture tour of 13 landmarks, including homes that are not typicall…

Indiana has lost 2,046 farms over the last five years — an average of more than 400 a year — as farmers are getting older and farm incomes are…

Admission to all National Parks free on Saturday

National Parks are free across the country Saturday, including the Indiana Dunes National Park in Porter County.

Horseshoe, Centier, other Region companies rank among best places to work in Indiana

South Shore Arts has been busy and is opening several new exhibits across the Region over the next few weeks.

Architects, designers, property managers, commercial landlords, developers and anyone in charge of an office setting might want to consider pa…

Every year, Region employers like Horseshoe Casino in Hammond, Centier Bank in Merrillville, Peepers by PeeperSpecs in Michigan City, General …

Over the past decade, Indiana-American Water has invested $200 million in replacing aging infrastructure in Northwest Indiana, where it suppli…

Merrillville officials put it all together to spark growth

With a population of more than 35,000, Merrillville has grown 16 percent since 2000, according to City-Data.com.

Former LaPorte Mayor Blair Milo, now Indiana's first Secretary for Career Connections and Talent, will return to the Region to address the Lak…

More than 45 companies plan to exhibit at the Lakeshore Chamber of Commerce's forthcoming 15th annual Business Expo on Friday.

White Lodging's longtime president and CEO of investments and development plans to retire early next year after a 30-year career with the company.

The former site of the Star Plaza Theatre, the Radisson at Star Plaza and the Twin Towers in Merrillville presents an "extraordinary opportunity" for development on the "best vacant piece of real estate in Northwest Indiana," now that White Lodging no longer has any plans to develop it.

Stores in downtown Whiting will explain what goes on behind the scenes at the inaugural Meet the Makers event.

The stately Victoria-era mansion at Morgan Boulevard and East Jefferson Street that was built by an early civic leader in the mid-19th century, owned by early Valparaiso University President Henry Baker Brown, and long home to the White House Restaurant is getting demolished.

Solar storm to produce auroras in the northern US

Solar storm to produce auroras in the northern US