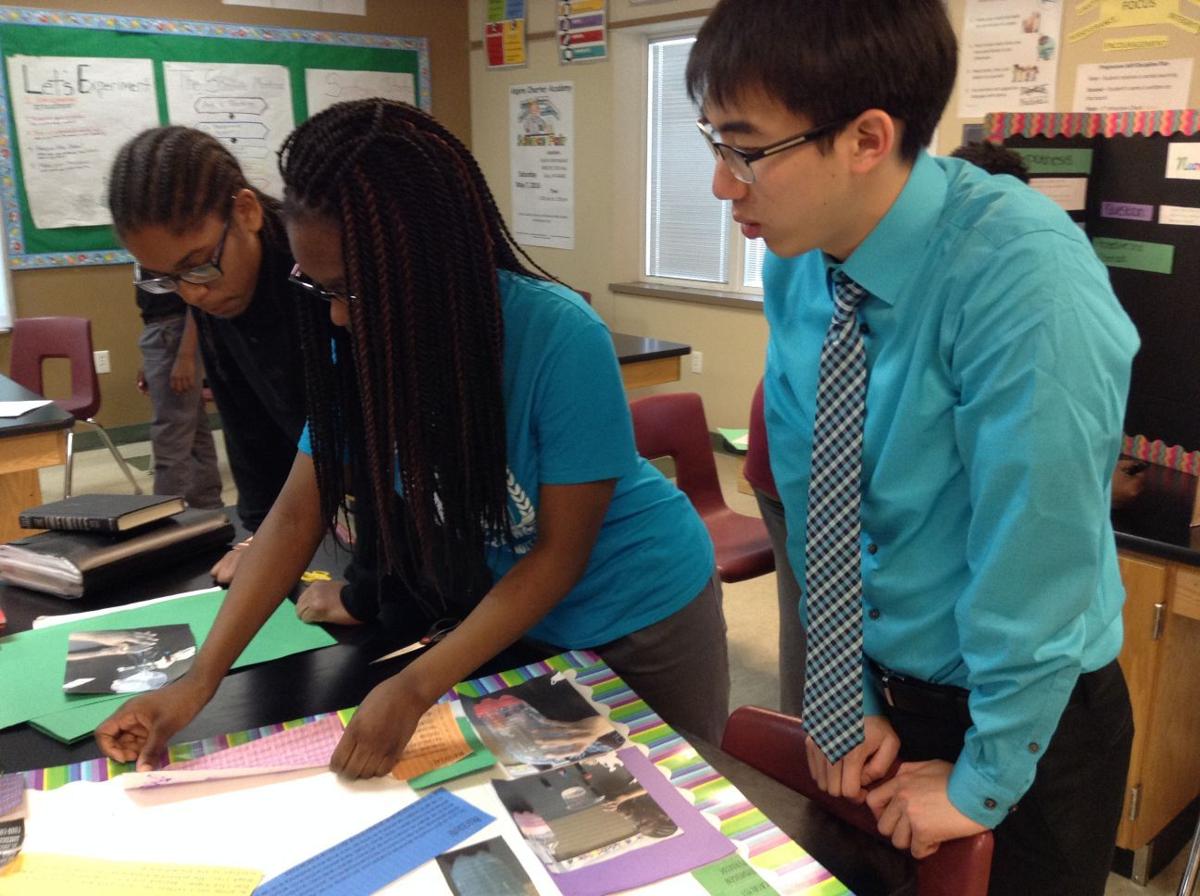 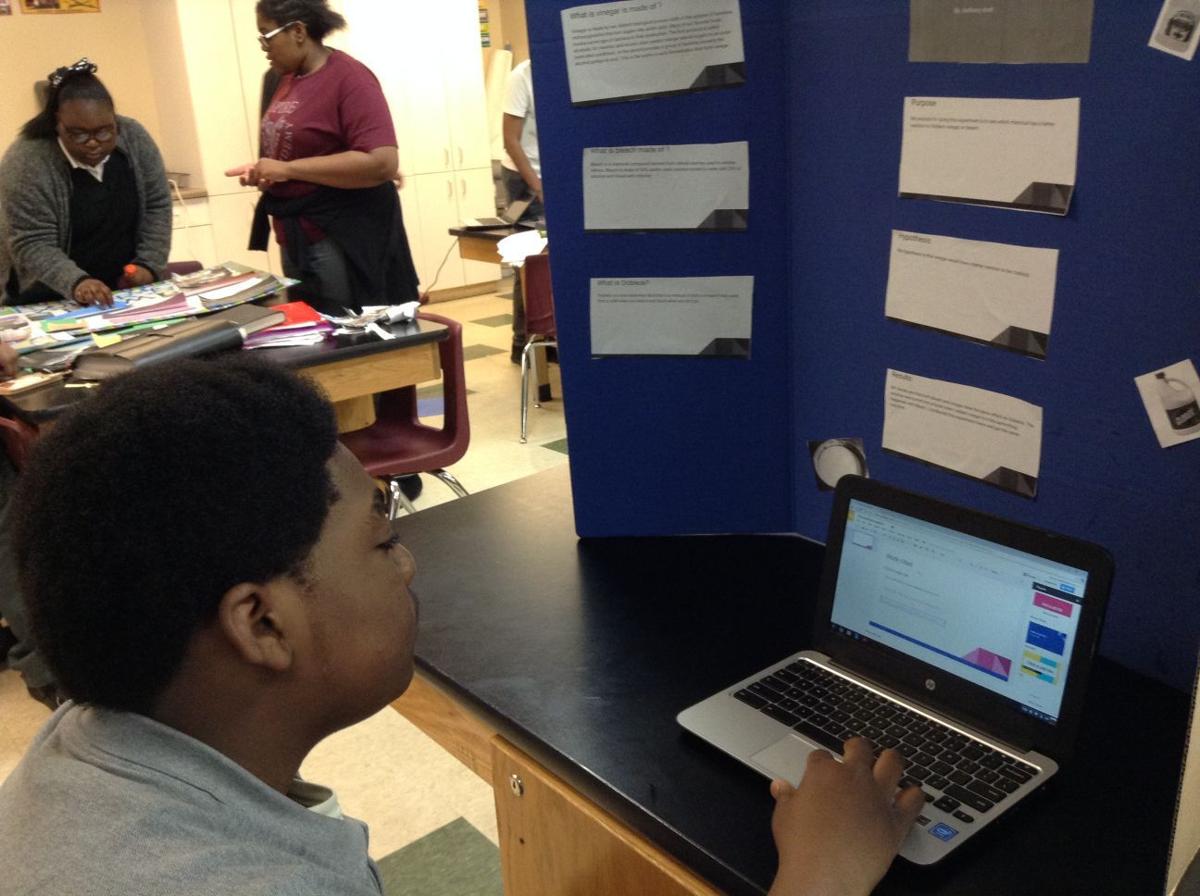 Aspire eighth-grader Anthony Shell works on his science project about oobleck. He said the purpose of his experiment was to see which chemical has a better reaction to oobleck — vinegar or bleach. 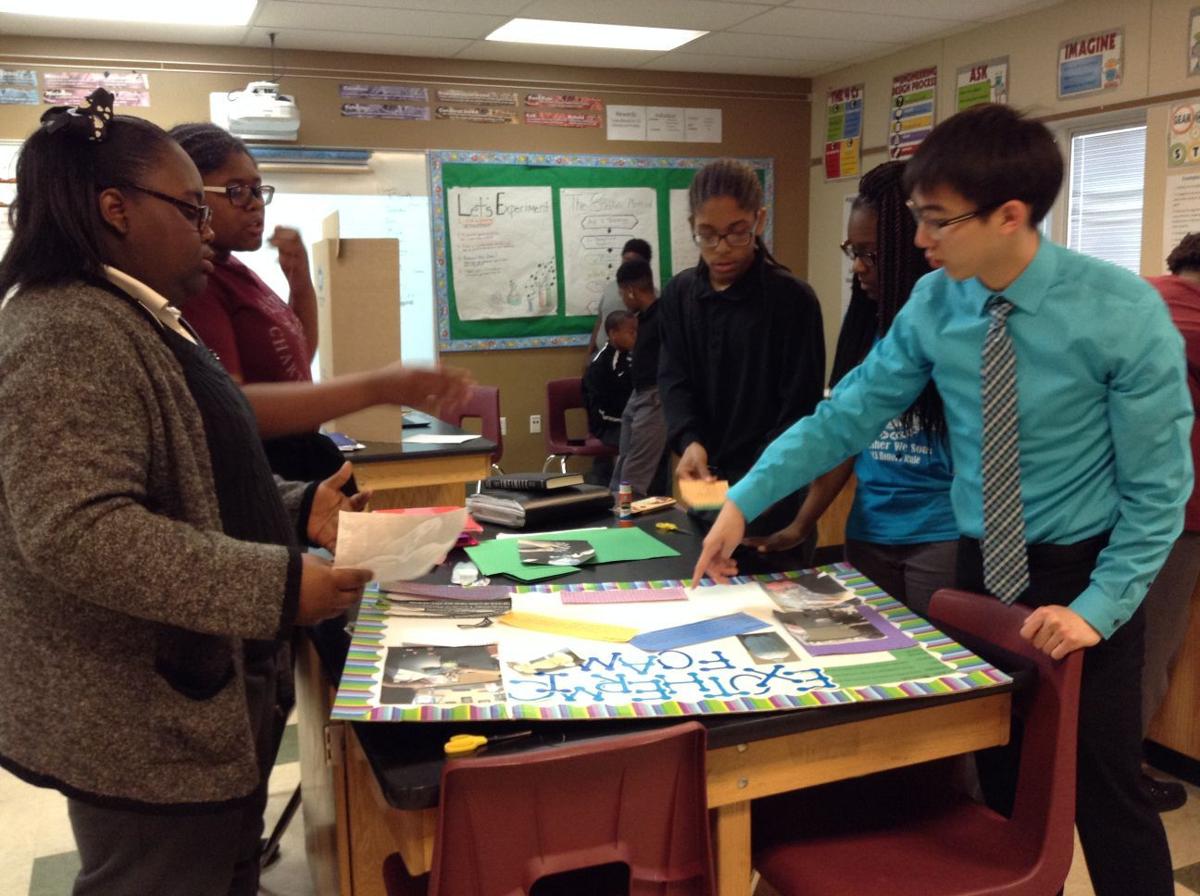 Aspire Academy science teacher Jeffrey Yo, far right, points out something on the science project to a group of students.

Yo, who took over the position in January, tells students they have to think like a scientist by being open-minded, creative, skeptical, curious, honest and aware of biases.

"I try to relate the units we study to the modern day, including not just science but (also) engineering, math and technology," he said.

Eighth-graders Sequoya Turner and Amani Davis said Yo related science to the NBA. One day the students compared balls, including basketballs and baseballs, when they measured which balls bounce higher.

The two girls were busy working on their science experiment last week looking at how to make lava lamps using everyday household items.

About 140 middle school students are preparing science projects for the school science fair scheduled for May 7.

At another table, another group of students, Kennedy Rozier, Jeanne Ezell, Seveion Nelson and Ariel Riley, worked on a project called "Exothermic Foam," and they determined that yeast makes foam better than potassium.

"The potassium made it foam up, but it took longer than it did with the yeast," Rozier said.

Riley said the actual experiment didn't take long, but it took a while to get all of the materials. "We learned that different chemical reactions that can happen while using simple products," she said.

Eighth-grader Anthony Shell said he had fun making oobleck at his grandmother's house, adding green gelatin to it.

Oobleck is a classic science experiment, entertaining to kids and adults. Oobleck acts like a liquid when it's poured, and a solid when a force is acting on it.

Yo, who is in his second year as a teacher, said he really enjoys teaching middle school.

A native of California, his parents are from Taiwan. Yo came to the Midwest, where he enrolled at the University of Chicago and earned a bachelor's degree in sociology, with a minor in statistics.

"I had taken enough science classes to be endorsed in science," he said.

Yo earned his teaching credentials at the Dominican University in River Forest, Illinois. He has been a member of Teach for America, and his first position was teaching middle school students in the Chicago Public Schools.

Before teaching middle school, Yo said he thought those grades would be most difficult because he'd heard plenty about students being disrespectful.

"There's a little of that, but I can talk to them," he said. "I can talk to them about their life goals and what they want to do. ... That's what I love about teaching middle school. I see them really trying to find out who they are at this stage, and I enjoy working with them."

Aspire Charter Academy is in its eighth year of operation. It has 704 students in kindergarten through eighth grade. The school is one of 28 schools chartered through Ball State University.

Aspire Principal Rasheeda Green said the largest class of students is kindergarten; there are four sections of kindergarten students.

The Indiana Department of Education graded Aspire a D in 2015.

Did you miss our latest Making the Grade stories? This slideshow features all the stories that have run in the series for the 2015-2016 school…

CHESTERTON — When most people hear the buzzing of a bee, they tend to move away.

Aspire eighth-grader Anthony Shell works on his science project about oobleck. He said the purpose of his experiment was to see which chemical has a better reaction to oobleck — vinegar or bleach.

Aspire Academy science teacher Jeffrey Yo, far right, points out something on the science project to a group of students.