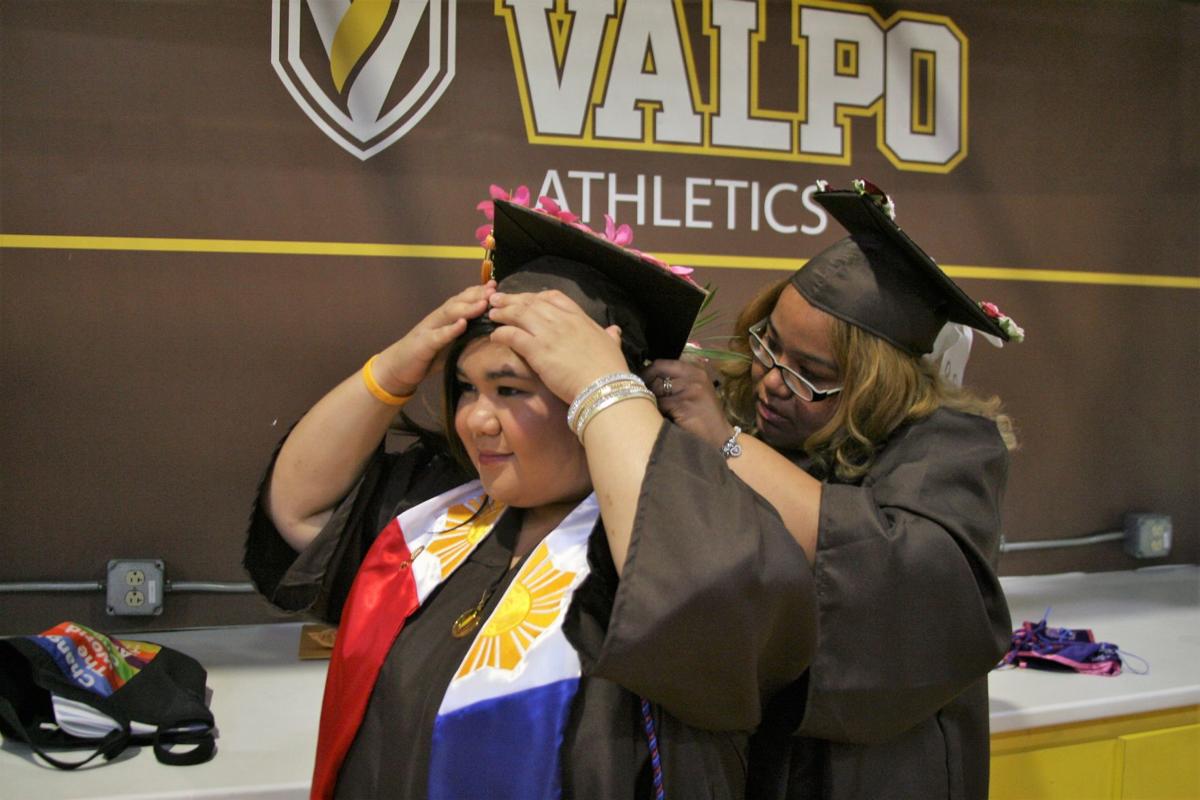 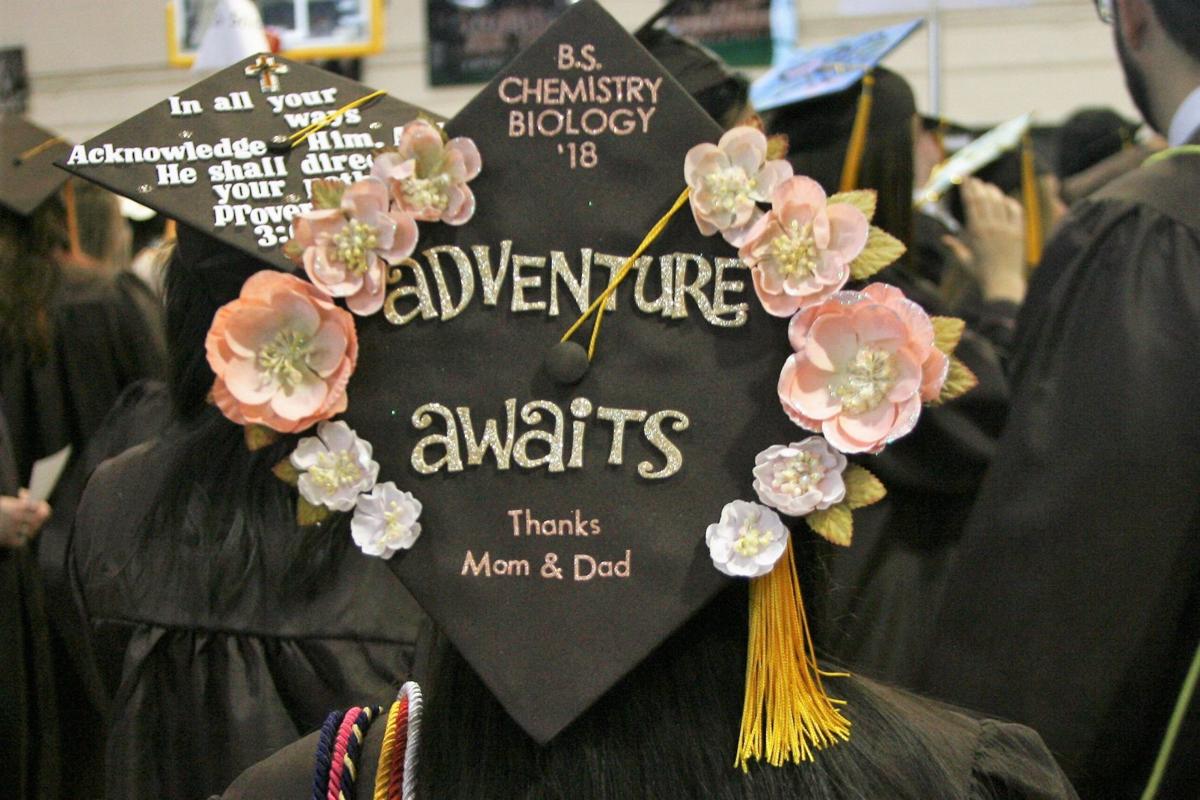 Shilpa Dhar, of North Aurora, Illinois, posted this message on her mortarboard for Valparaiso University commencement exercises Sunday in the school’s Athletics-Recreation Center. Dhar received a bachelor’s degree in chemistry and biology. 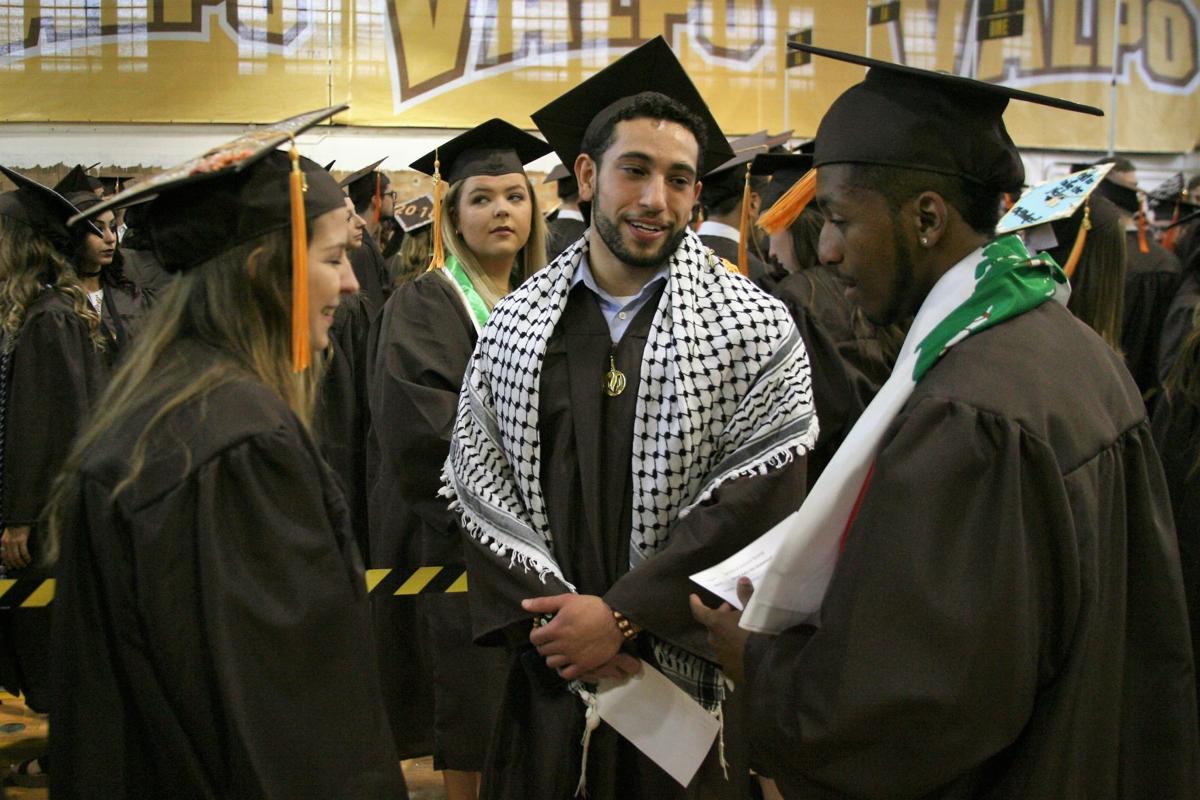 Berry, who received a bachelor’s degree in social work Sunday from Valparaiso University, posted this message: “I did it for my Noah.”

“Graduation means everything to me,” said Berry, from Hazel Crest, Illinois. “I’m the first college graduate in my family. I’m setting a standard for my son.”

Noah turns 1 in a few weeks, and his mother wants him to know this: “You can do anything you put your mind to. Set your goals and do it.”

Berry was among 659 VU undergraduate degree recipients who proceeded into the school’s Athletics-Recreation Center for commencement.

In his address to the Class of 2018, the Rev. David Beckmann charged graduates: “Don’t settle for less. Live well, be servant leaders, and change the world.”

Noting that only one in 14 people worldwide will graduate from college, Beckmann called VU graduates fortunate for this opportunity. He asked the graduating class to think of ways they can address the challenges this nation and the world are facing.

Beckmann praised VU for its commitment to international study and servant leadership. Arielle I. Thomas, offering remarks as a senior class representative, was exposed to both.

Calling VU her “second mother,” Thomas said the university did “teach, nurture and guide me.”

While her first mother laid the foundations for her, Thomas said VU “gave me space to grow.”

Other undergraduates shared their own stories, including Sarah Miotke, of Schererville, a nursing major. “I can finally start my career as a nurse,” she said. “I like the more intimate bond nurses have with patients.”

Horace Douglas, of Michigan City, earned degrees in Japanese and education. “I’m starting out new,” he said. “I was working, but I felt I was stagnating. Now I’ve found my calling. I can actually start my life.”

Douglas said college taught him perspective. “I can think outside my own head,” he said, “and see the world from others’ perspectives.”

Michelé Strachota earned a degree in creative writing. The Milwaukee woman noted that while others may see the fruits of their work, “as a writer you don’t always see that. You have to trust your feelings.”

Tiara Moure, of Chicago, with a degree in psychology, represents the first generation of her family to graduate from college. “This is a big deal,” she said, “breaking the cycle of poverty. We can do it.”

Some graduates honored their native lands. Nursing graduate Hussein Sayf Shahire, from Temecula, California, wore the flag of Lebanon and a kuffieh, a traditional Lebanese garment.

Mussad Khalid Al Tissan, from Saudi Arabia, a business management major, wore his country’s flag. “This is a moment I am not going to forget, ever,” Al Tissan said. “I’ve been working for this for four years.”

Shilpa Dhar, of North Aurora, Illinois, posted this message on her mortarboard for Valparaiso University commencement exercises Sunday in the school’s Athletics-Recreation Center. Dhar received a bachelor’s degree in chemistry and biology.