Attorney General Todd Rokita is taking his unprovoked battle with Indiana's local school boards and the state education establishment to the next level.

The Republican, originally from Munster, recently issued a second, expanded edition of his "Parents' Bill of Rights" that in 54 pages goes well beyond his initial 16-page screed over Critical Race Theory (CRT) and other "Marxist ideologies" that he originally claimed are "consistently being backdoored into Indiana classrooms."

Rokita's new handbook practically is a call to arms for Hoosier parents to swarm school board meetings, school administrator offices, teacher classrooms and the Indiana Statehouse demanding answers about everything their child may potentially encounter in a school building on any given day.

"We the parents have the duty to raise our families and are primarily responsible for what and how our children learn. It's not the government's job to raise our children, even if it wants to do so," Rokita said.

"Having your child's school and its employees work against you as you raise your family according to your Hoosier values shouldn't be allowed."

To that end, Rokita lists a series of topics he says parents should particularly be wary of because Rokita believes they have a "polarizing effect on education instruction."

Rokita acknowledges none of these topics are aligned to Indiana's educational standards, nor are they explicitly being taught in Indiana schools.

Yet, Rokita also observes that, unlike other states, Hoosier lawmakers have not taken steps to prohibit instruction on these topics in Indiana classrooms, and he reminds parents they have a right to petition the Republican-controlled General Assembly to take such action.

In the meantime, Rokita's guide advises parents how to opt their children out of some types of classroom instruction, how to access school curriculum materials, how to file a curriculum complaint, and even how to run for their local school board — along with an advisory to contact their local state legislators if they want school board candidates to run under political party labels.

"Accountability in our schools requires each parent to examine what content is being presented to children in the classroom and what elected officials and school administrators are doing to maintain the best interests of our children," Rokita said.

"Parents interested in running for their local school boards should be educated on CRT and other controversial theories and work to hold school officials accountable for the content being taught in their schools."

Rokita's guide also delves into the rights of parents to make health care decisions on behalf of their minor children, advises parents how to complain about school face mask requirements amid the COVID-19 pandemic and discusses the abstinence-only foundation of Indiana's human sexuality instruction.

"It should be noted that schools are prohibited from asking students about their gender identity or sexual behaviors or attitudes in sex education classes, or any other classes," Rokita said.

In addition, Rokita makes a special point of using the term "government schools" to describe public schools as a hint at indoctrination, even though the Indiana Constitution specifies it's the duty of the General Assembly to provide "for a general and uniform system of common schools, wherein tuition shall be without charge, and equally open to all."

Rokita said his guide ensures "teachers, administrators, and school board members work for us" and "not the other way around."

"But parents have learned they must stay watchful, and they need to understand their legal rights to participate in the part of their children’s education that occurs outside the home, including in government schools."

A spokeswoman for the Indiana Department of Education, whose operations ultimately are controlled by Republican Gov. Eric Holcomb, said the agency has not reviewed Rokita's "Parents' Bill of Rights."

Meanwhile, the Indiana School Boards Association seemed to welcome it — if it brings an end to the verbal confrontations and meeting interruptions that followed the release of Rokita's first edition in June.

"If the Parents Bill of Rights 2.0 inspires more parents to engage in a civil dialogue with their local school board, the Indiana School Boards Association will be thankful." 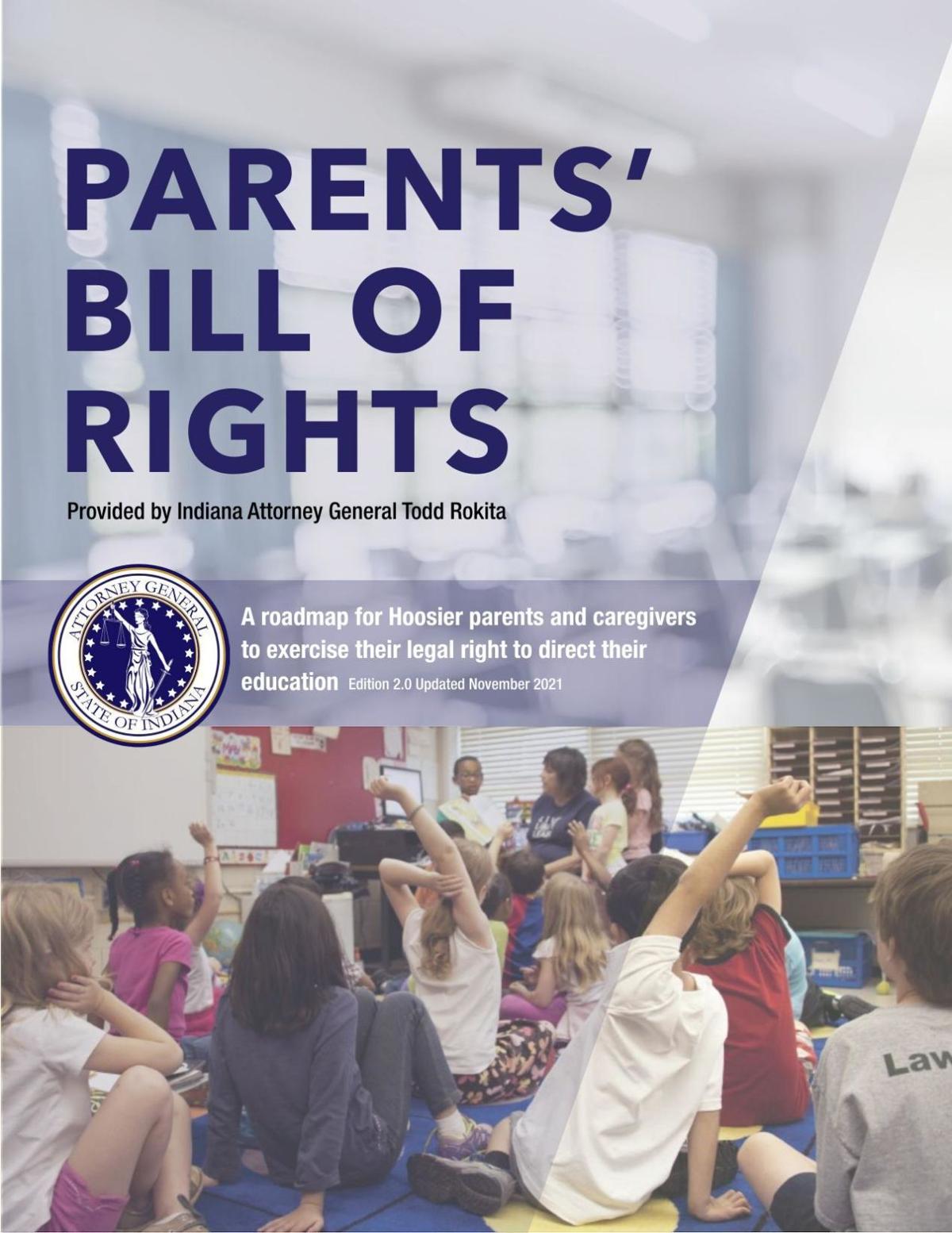 Leaders are calling Indiana lawmakers back to the Statehouse on Nov. 29 for an unusual one-day meeting to consider adopting a plan limiting COVID vaccine requirements at private businesses.

Lake County residents looking for something different to do over the Thanksgiving holiday might want to try their hand at drawing new district boundaries for the county council and county commissioners.

The Indiana Democratic Party is following the lead of Hammond Mayor Thomas McDermott Jr. and advocating for the legalization of marijuana in the Hoosier State.

"I didn't interfere with (Batistatos') employment contract. I criticized the way he did his job as a public figure spending millions of dollars of taxpayer money," Mayor Thomas McDermott Jr. said.

"This is a sad day for our country when someone can put themselves in harm’s way, declare self defense, and be acquitted," said Roy Dominguez, a defense attorney and former Lake County sheriff.

"These provisions demonstrate the knowledge that workers and working families are the key to creating wealth and prosperity for all individuals," said U.S. Rep. Frank J. Mrvan, D-Highland.

No one was injured Wednesday when a law enforcement officer assigned to the Indiana secretary of state's securities division accidentally fired a gun in the office.

"We can't effectively do our job at the Board of Commissioners without good, accurate information," said Commissioner Mike Repay, D-Hammond.

The Gary Community School Corp. has reached an impasse with its teachers amid negotiations over a new collective bargaining agreement.

Records show Derrick Watkins was shot to death shortly before 12 p.m. during an incident in the 13800 block Cottage Grove Ave.

A total of 4,070 new COVID-19 cases were confirmed in Indiana Tuesday, according to the Indiana Department of Health. It's the first time the state's daily case count has exceeded 4,000 since Sept. 16.

A Massachusetts man was killed Saturday morning in what police believe was a single-vehicle crash in rural LaPorte County.

Counselors have reported not only is call volume increasing, so is the critical nature of the calls. Prevalent issues include depression, anxiety, feelings of being overwhelmed, and loneliness.

Gov. Eric Holcomb is saying tax cuts are "not off the table" at the 2022 Indiana General Assembly, but the tax cut option largely will depend on the state revenue forecast due to be released Thursday.

State schools chief may be removed from gubernatorial line of succession

The House Judiciary Committee voted unanimously Wednesday to advance a proposed constitutional amendment removing the state superintendent of public instruction from the gubernatorial line of succession.

Indiana elementary and high schools generally cannot be held liable for any prevention measures they take, or fail to take, to minimize the potential spread of COVID-19, said Attorney General Todd Rokita.

Oklahoma Legislature passes the most restrictive abortion ban in the nation

Oklahoma Legislature passes the most restrictive abortion ban in the nation