Indiana school districts that successfully persuade voters to pay higher property taxes to support their local schools soon may be required to share referendum revenue with nearby charter schools.

Under the plan, the total amount of money to be raised by the referendum through higher property taxes would be increased above what's being sought by the school district to provide the extra money to charter schools.

Charter schools receiving referendum funds would be under no obligation to spend the money in the same manner as the local school district, such as for teacher pay raises or school safety improvements, and only would have to disclose afterward on their websites how the money was spent, according to the legislation.

State Rep. Robert Behning, R-Indianapolis, the sponsor, said the measure is about "fairness and parity" between public school districts and charter schools, which he said in his area are struggling to keep up with the referendum-funded teacher pay rates offered by Indianapolis Public Schools (IPS).

"The charter schools feel as if they have been left in a situation where they do not have the opportunity to pay the same salaries that IPS is going to have, as an example, because they don't have the additional resources that IPS has been able to garner with the referendum," Behning said. "Yet, the parents of the (charter) students are paying those property taxes."

Behning suggested mandatory sharing of school referendum proceeds, instead of just the optional sharing available under current state law, could result in more successful referendums because parents of charter school students would be more likely to support a referendum ballot question if they know a portion of the temporary property tax increase is directly funding their children's education.

"It has no negative impact to the traditional public school. It only creates fairness to those kids in the charter school," Behning said.

The nonpartisan Legislative Services Agency estimates that if the proposal were in effect in 2021 it would have diverted to charter schools $26.6 million of the $402.8 million generated by 67 school referendum levies in effect across the state.

State Rep. Vernon Smith, D-Gary, said he worries if this plan becomes law charter schools will be under no obligation to support a referendum effort, but will be able to cash in on the work of public school parents, employees, and supporters simply seeking to maintain school district operations — a struggle often caused by charter schools draining away students and state funding.

"Our school corporation went through three efforts to get a referendum passed and our last one was successful because we generated a whole lot of community support," Smith said. "The charter school can just sit back and be the recipient."

State Rep. Ed Delaney, D-Indianapolis, labeled the plan "revenue sharing of the worst sort" because charter schools are not accountable to property taxpayers for the money they spend in the same way as traditional school corporations.

"The property taxpayer will be compelled, if they want to help the traditional public schools, to give part of their property tax money to a school they do not control, that they cannot vote for, that they have no role with. It is, as to them, a stranger. I don't think forcing schools to give money to strangers is 'fair.'

If the proposal becomes law it would not immediately apply to the Valparaiso Community Schools referendum on the May 3 election ballot.

However, any new school referendums approved at future elections, and any renewals of expiring referendum levies, would be subject to revenue sharing with charter schools. 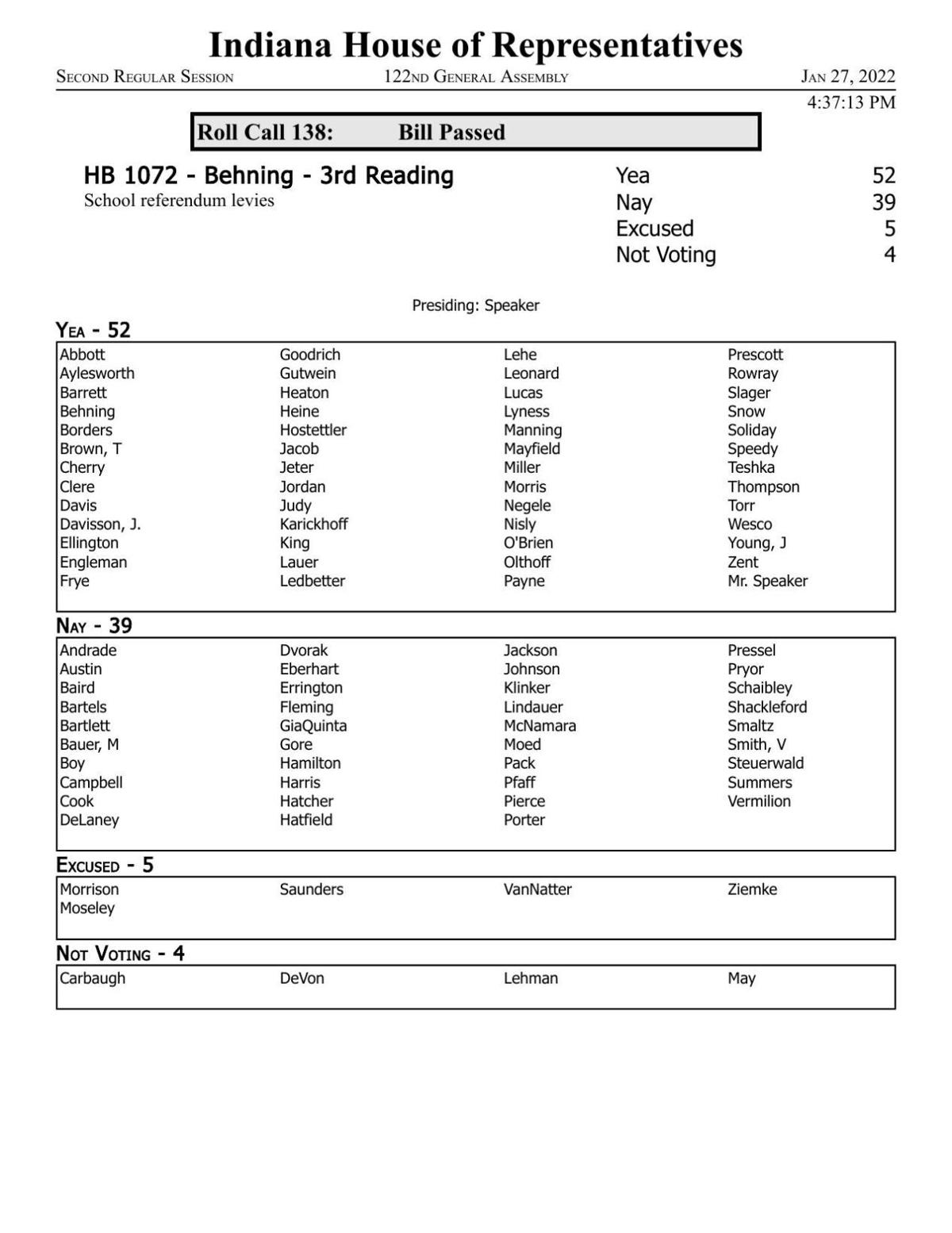 Valparaiso school board approves resolution to put referendum on May ballots

If approved, the referendum would proceed at a lower maximum tax rate, decreasing from $0.2042 to $0.1495 per $100 of net assessed value, according to a press release from VCS.

A financial report presented to the board Thursday shows the importance of the referendum revenue, which the district began receiving in 2016.

For the first time in years, the costs of operating the Gary Community School Corp. should be fully covered by ongoing revenues as soon as Dec. 31, 2021.

The Gary Community School Corp. is getting closer to achieving what once was thought all but impossible — a balanced budget.

Gary teachers to see first raise in more than a decade

With the passage of their Nov. 3 referendum, Gary school leaders are now solidifying plans to bring GCSC teachers their first raise in more than a decade.

The referendum secures funding for teacher raises and to balance budgets — a key step in seeking to end state intervention at Gary schools.

Two House-approved legislative proposals of particular interest to communities in Northwest Indiana sailed through their review by Senate committees Thursday.

State Rep. Hal Slager, R-Schererville, is championing legislation at the Statehouse to increase what Indiana Medicaid pays for private ambulance runs to match the higher rates paid by Medicare.

The competition for the Democratic nomination for Lake County clerk has shrunk after former Lake County Coroner Merrilee Frey withdrew from the race prior to Friday's deadline.

Father gets son's vehicle out of snow; intoxicated son rear-ends him and drives off, police say

A LaPorte man allegedly repaid his father for helping get the man's vehicle out of snow Sunday by rear-ending his father's vehicle and driving away, according to the LaPorte County Sheriff's Office.

Dozens of mastodon fossils have been found throughout Indiana, including the bones of at least five mastodons now held by the Indiana State Museum found in 2005 in Hebron.

Indiana state prison and county jail inmates, and their families, no longer will be required to pay excessive per minute charges to speak with their loved ones over the telephone.

"Trans kids deserve the same rights as anyone. None of us chose to be trans, or decided to make life more difficult for ourselves," said Jasper Wisecarver, the plaintiff.

Region lawmaker honored for practicing civility at the Statehouse

"Every session, I come to the Statehouse with the goal of working collaboratively to achieve positive results for Hoosiers," said state Rep. Earl Harris Jr., D-East Chicago.

Republican voters living in southern Lake and Porter counties, Newton County, and northern Jasper County have a choice between youth and experience in the contest for Indiana House District 11.