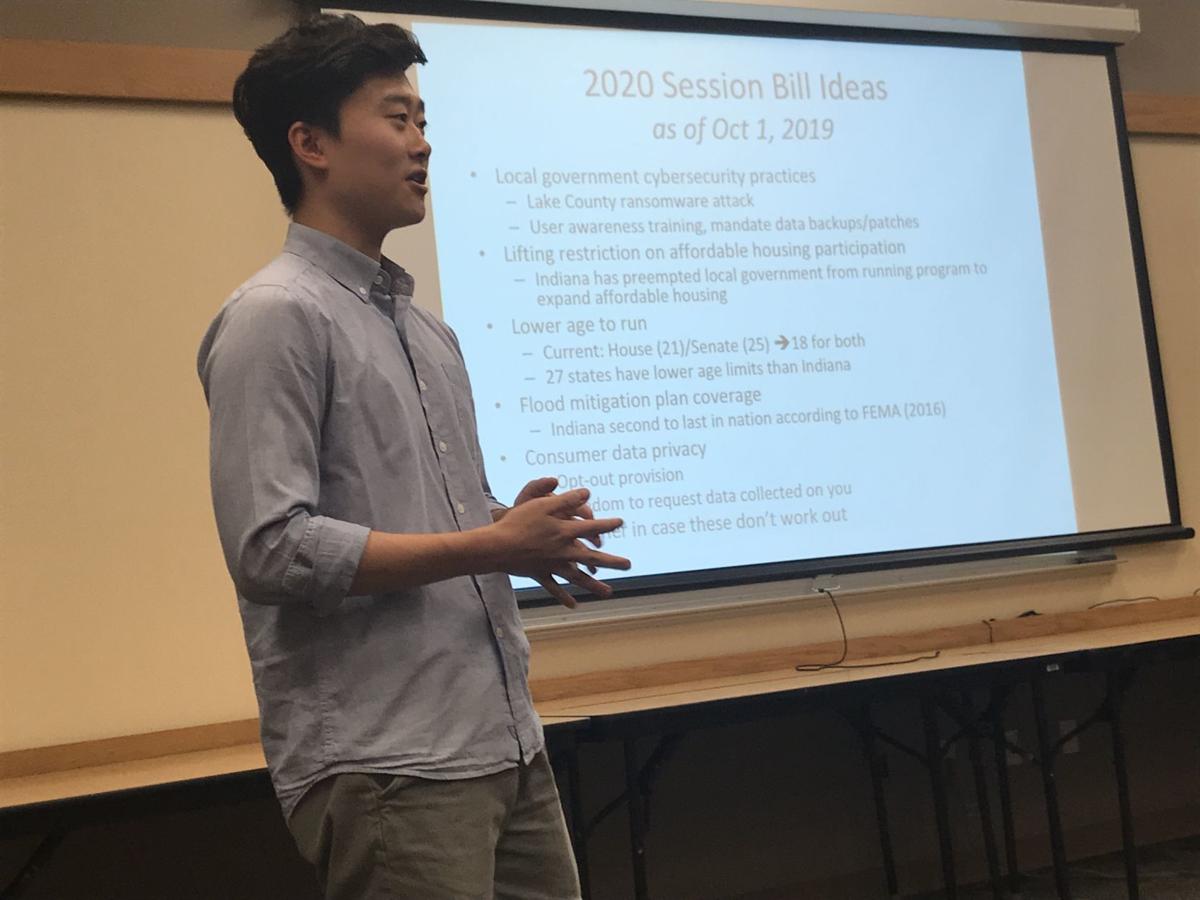 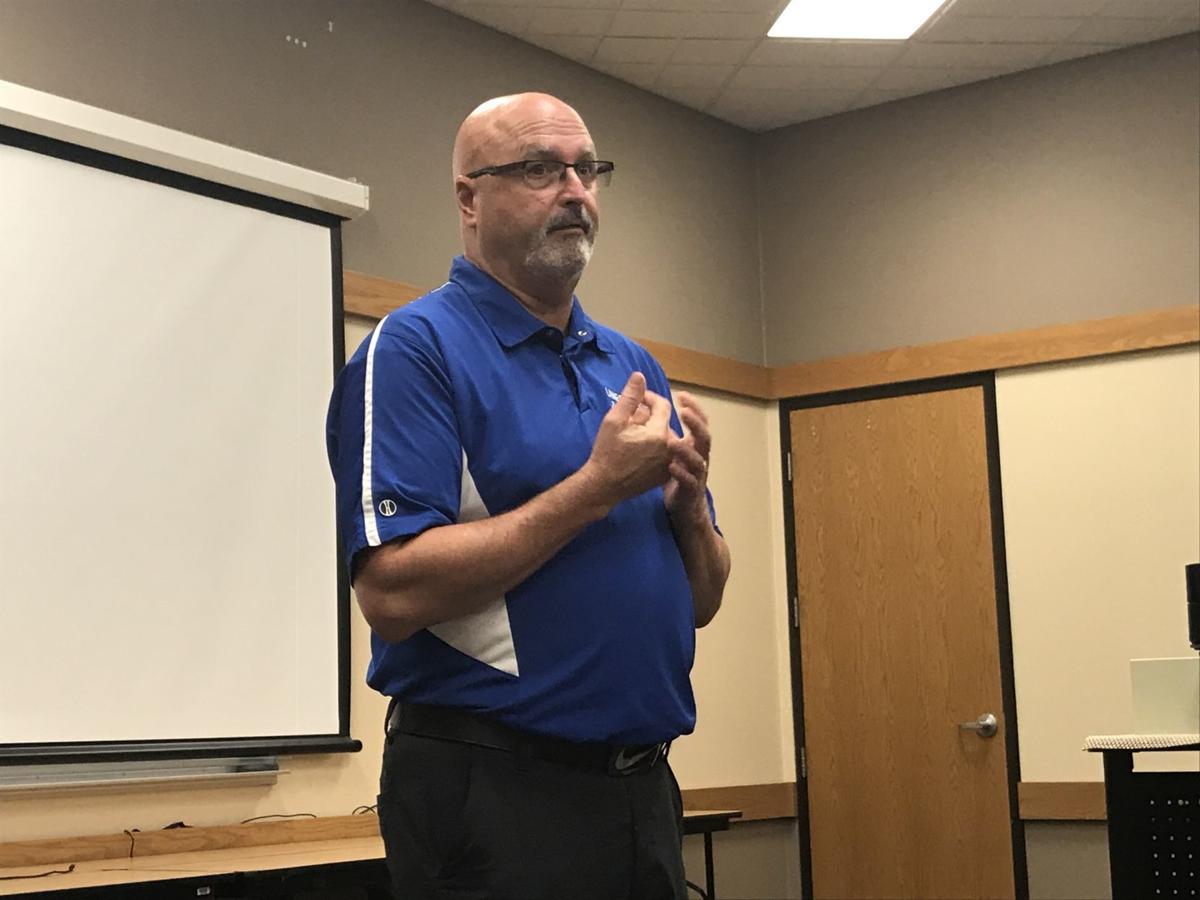 Lake Central School Corp. Superintendent Larry Veracco shares an update on the use of taxpayer funding to support Lake Central school projects and educational needs in a community forum Tuesday night at the Dyer-Schererville Library. 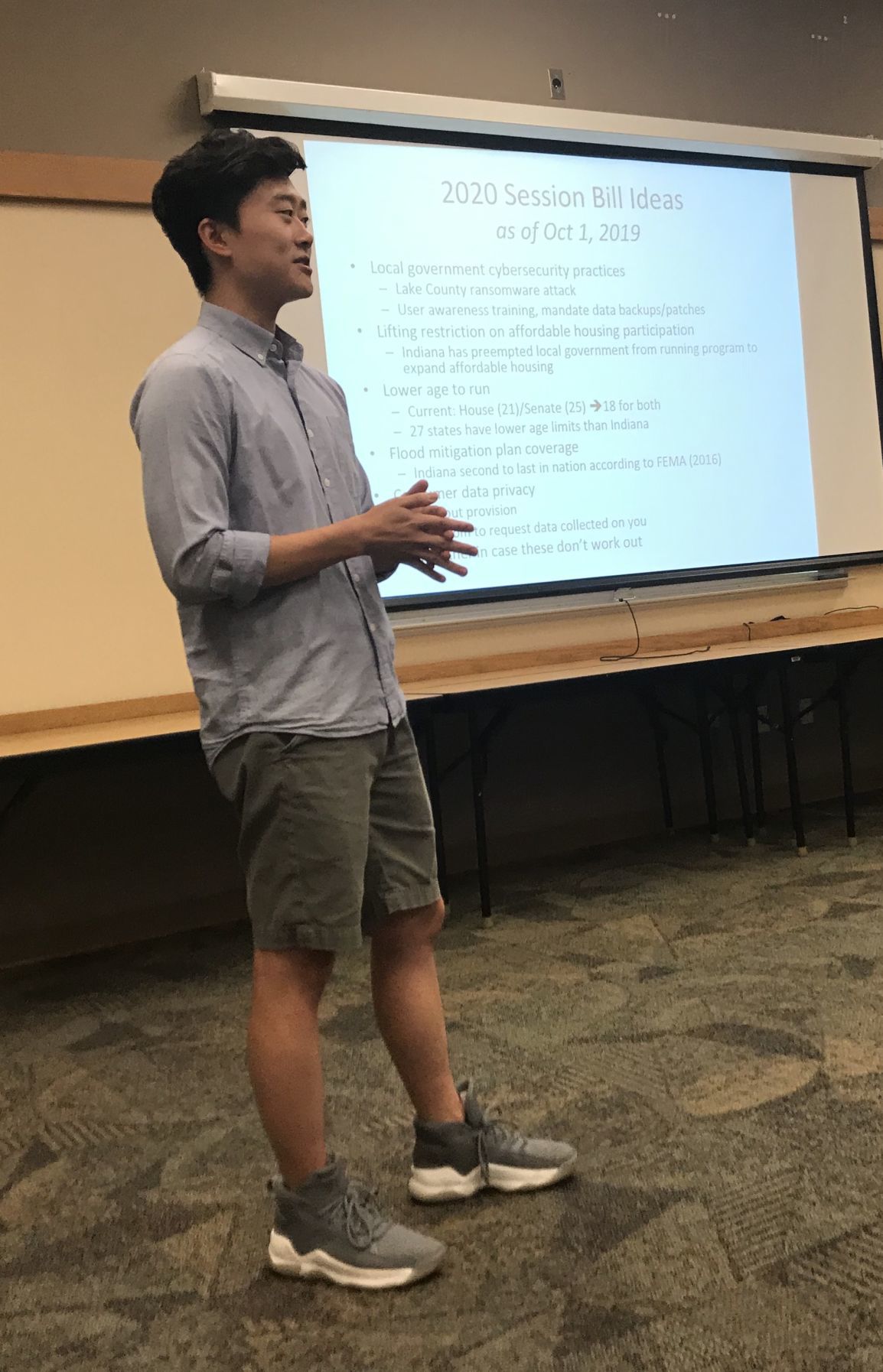 Chyung — who recently returned from a visit to the Republic of Korea with House Education Committee Chairman Rep. Bob Behning, R-Indianapolis — cited education as the issue of greatest importance lawmakers should consider heading into the coming legislative session.

"Education uniquely at the state level in America is heavily funded by state and local taxes, not federal taxes," Chyung said. "Education is the top issue that I perceive the state needs to work on."

Chyung met in two similar forums last month — one with Veracco and the other with Griffith Superintendent Michele Riise. All meetings so far have attracted small turnouts of about a dozen parents and community members.

The freshman representative shared findings from his trip to Korea comparing differences in education funding models and similarities in a growing focus in both countries on mental health.

He was invited to take the educational tour of Korea by the Office of the Consulate General of Korea in Chicago following his election. While initially drawn to invite a fellow Democratic house member to join him on the trip, Chyung said he ultimately asked Behning to join him to better get to know the education committee chair and seek an opportunity for bipartisan understanding of issues surrounding state education.

Though the two still hold differences on leading topics like teacher pay, Chyung said the congressmen were able to agree to work toward similar goals in education addressing the state's growing emphasis on career and technical education and in seeking to increase diversity in teaching and educational leadership.

"I'd never spoken to him before, so I just said 'Hi, nice to meet you, Bob, would you like to come with me to Korea?'" Chyung said. "And, we ended up having a really productive trip."

Chyung allowed Veracco to answer school-specific questions and give a brief update on how taxpayer funding in the district's two referendums — both passed in the last eight years — have helped advanced school construction projects and education priorities.

Veracco shared how community funding has helped support the placement of five school resource officers in Lake Central schools this year, now a dozen school counselors across the district and the ability to increase teacher salary to retain educators in place and stay competitive with offerings in nearby districts.

"As I was down at the state school board association conference the last two and a half days, some districts down feel like they can go back to their taxpayer based on the socioeconomic environment of their community, and they're going on seven, eight, 10 years without a teacher raise," Veracco said. "We're fortunate here. We have a very supportive community and we're grateful for that."

Veracco and Chyung have a third community forum planned at 6:30 p.m. Oct. 10 at the Dyer-Schererville Library. Chyung will meet with Riise again at 6 p.m. Oct. 9 at the Griffith Public Library.

State Rep. Chris Chyung, D-Dyer, is putting on a series of “State of our Local Schools” forums in the Tri-Town and Griffith communities to add…

ST. JOHN — There are still plenty of shopping days left until Christmas, but the heirs of John Plaskota took care of one major gift on their list.

Educators and parents are weighing in following the public release of Indiana’s first spring ILEARN assessment results, which showed more than…

ST. JOHN — Teachers and administrators in the Lake Central Schools have gotten an early Christmas present in the form of raises ranging from $…

ST. JOHN — Getting the referendum approved earlier this month means the conversation around the Lake Central School Corp. negotiating table is…

Voters in Lake County showed their support for school referendums in a big way.

ST. JOHN — Following a series of contentious meetings, St. John residents made clear in May that now is the time for change on the St. John To…

November has been a good month funding-wise for the Lake Central School Corp.

Lake Central School Corp. Superintendent Larry Veracco shares an update on the use of taxpayer funding to support Lake Central school projects and educational needs in a community forum Tuesday night at the Dyer-Schererville Library.