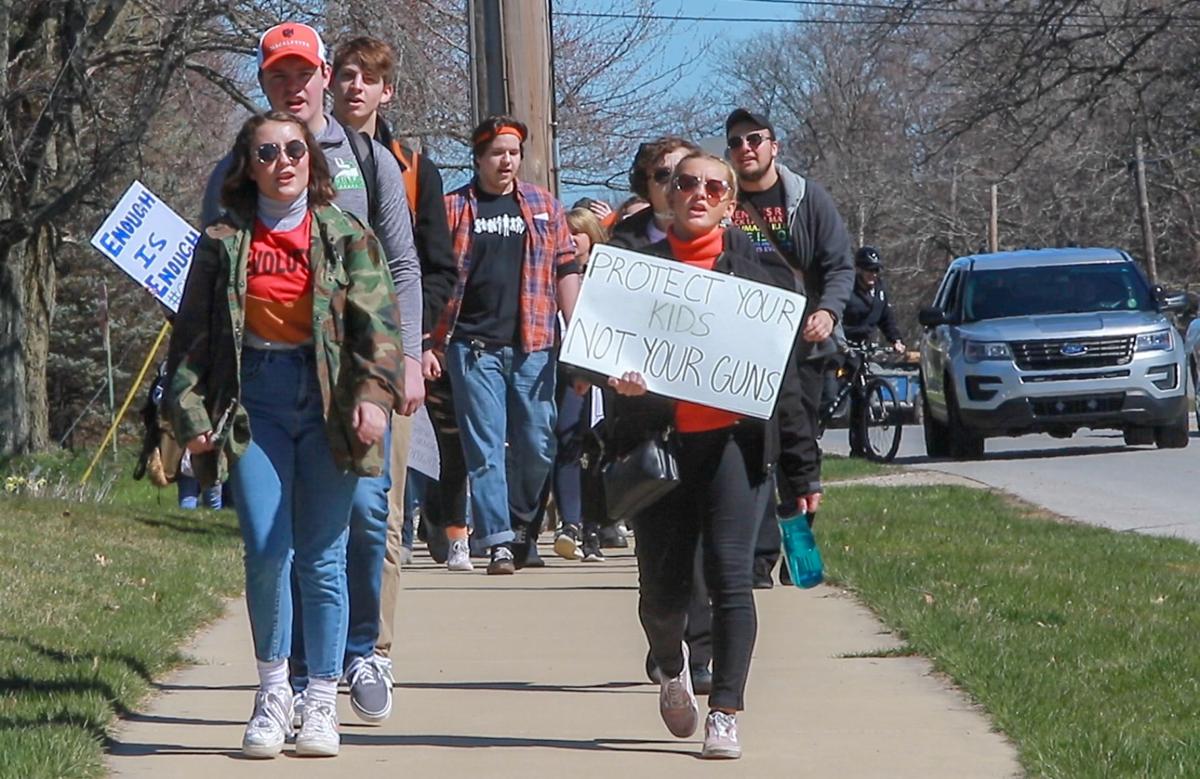 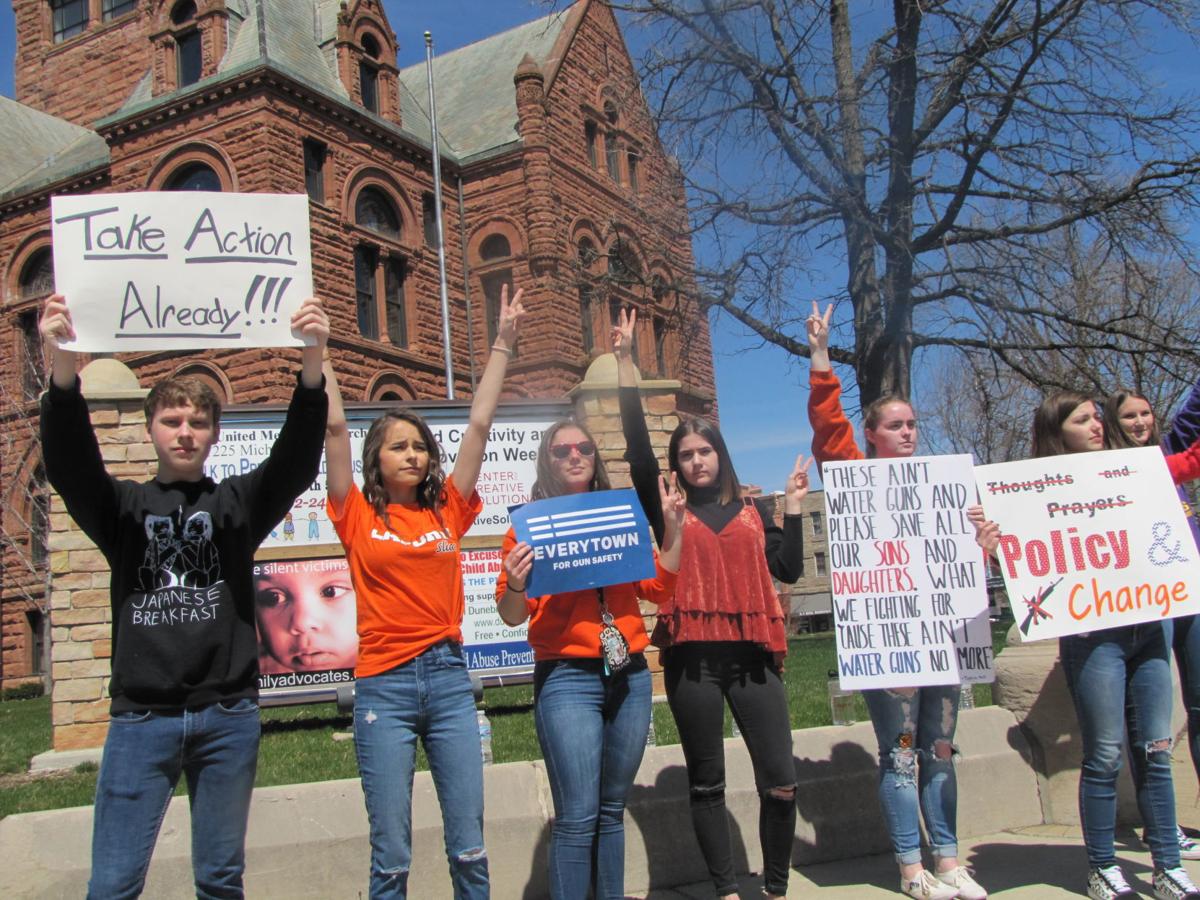 About 25 LaPorte High School students recognized the 19th anniversary of the school shootings in Colombine during a demonstration to stop gun violence Friday outside the courthouse. 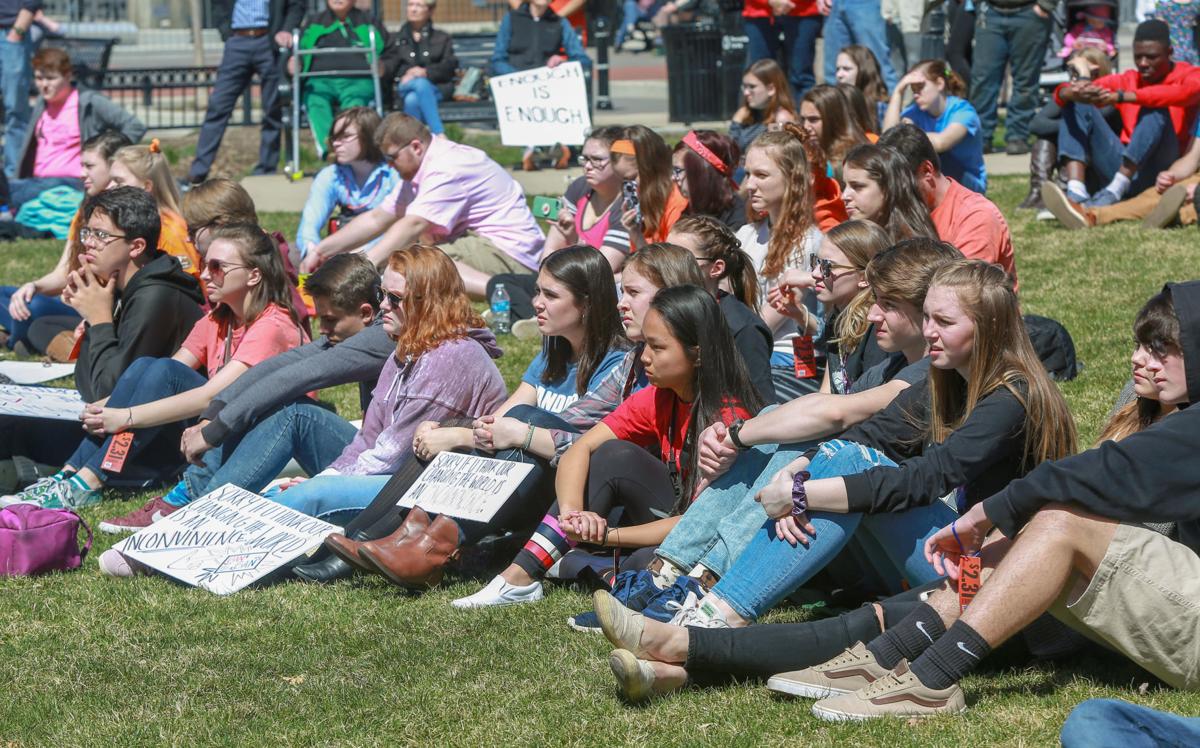 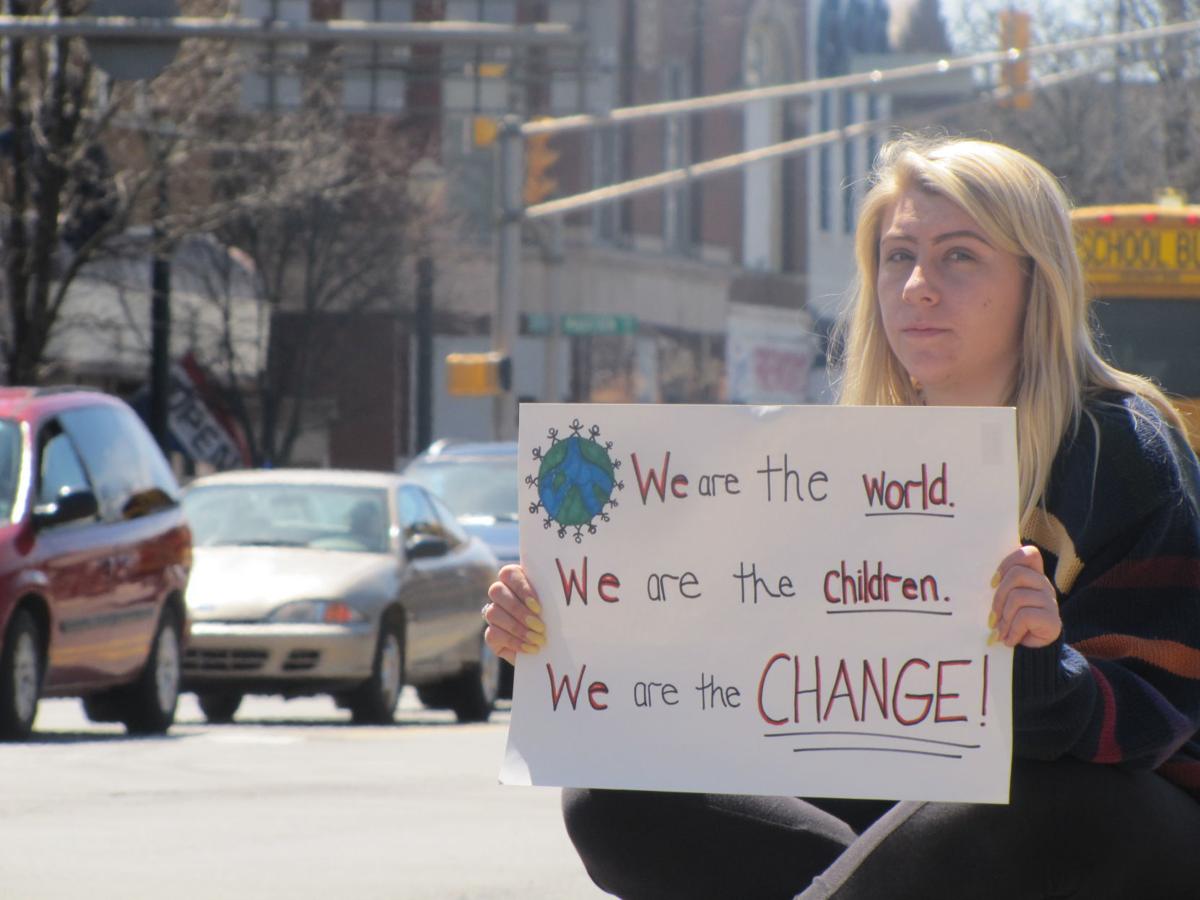 Lianna Lewis, a LaPorte High School junior, was among 25 students demonstrating outside the courthouse Friday to call for a stop to gun violence in schools. 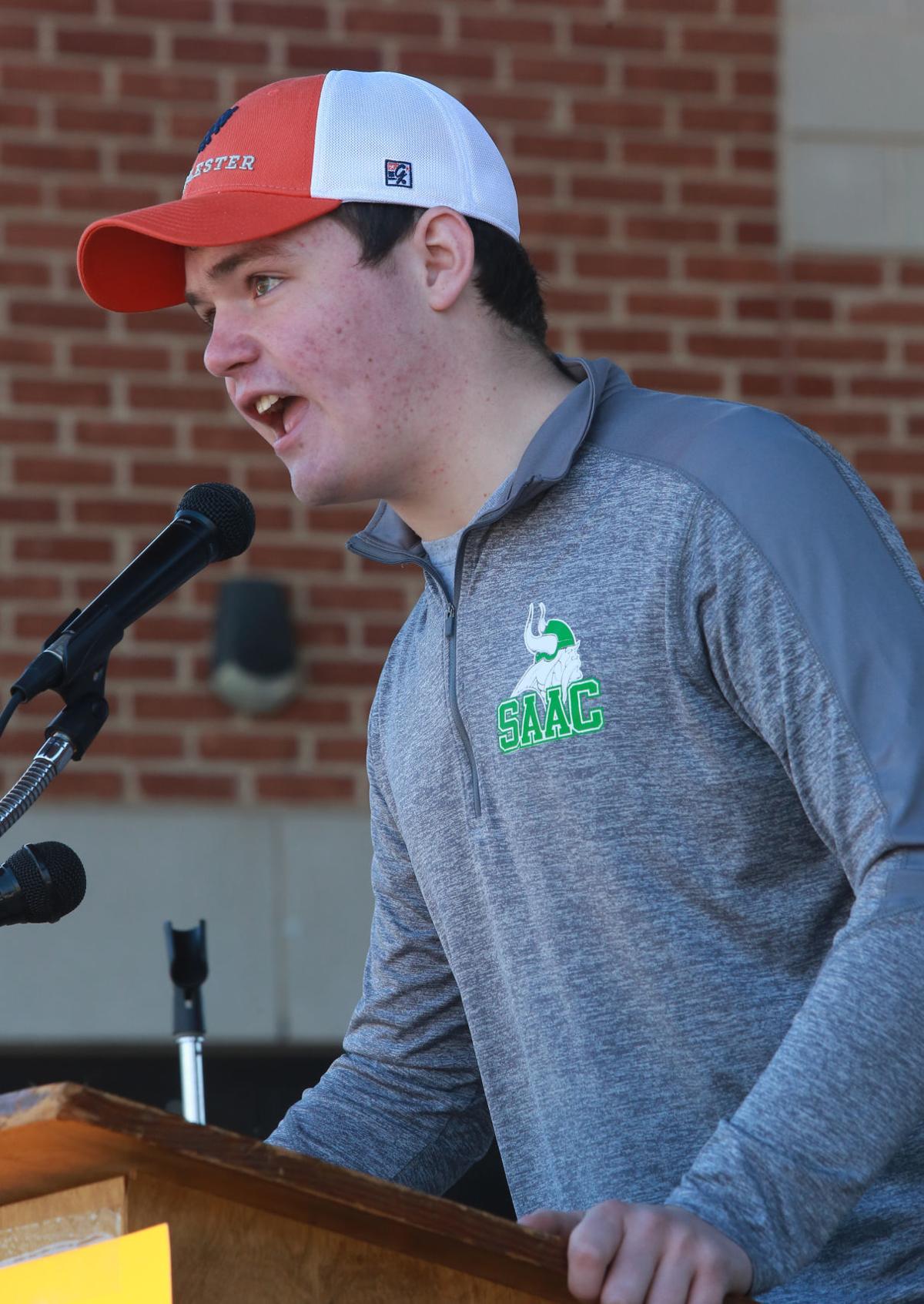 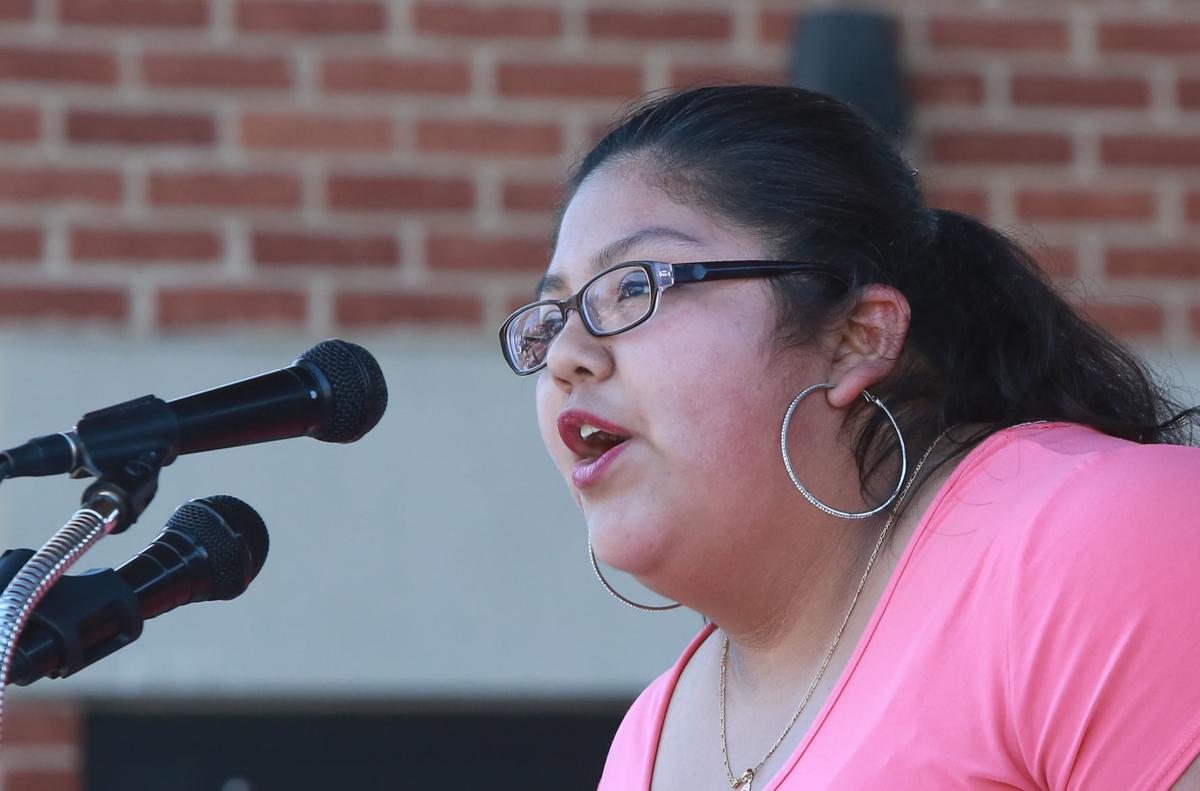 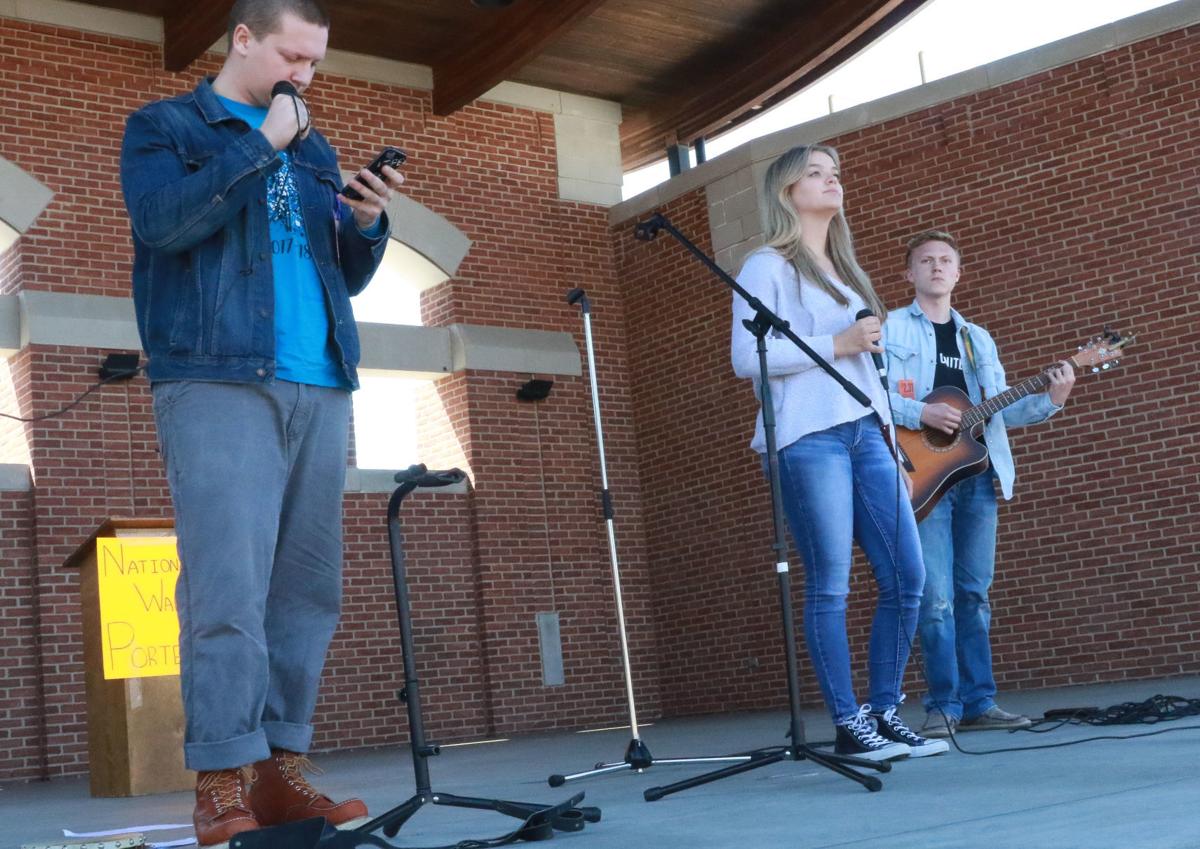 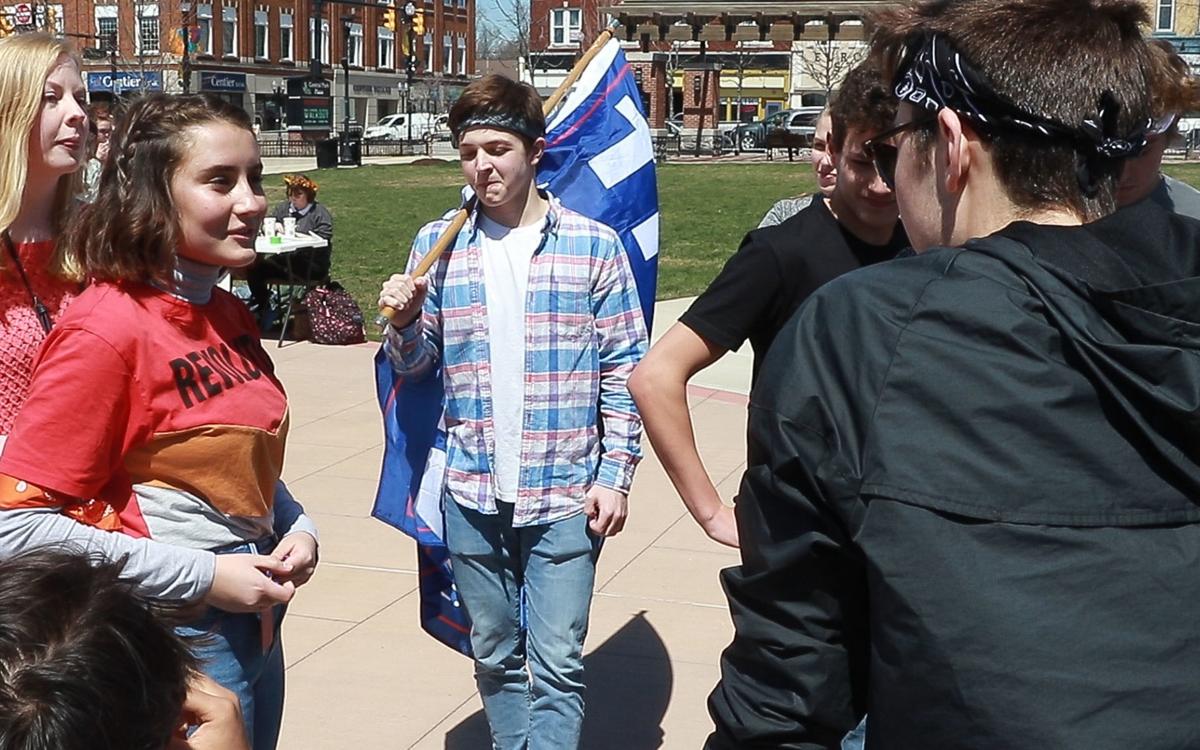 One of the Never Again school walkout organizers Ollie Grcich from talks with a group of students waving a "Trump" flag to tell them they are welcome but to please not instigate and problems. 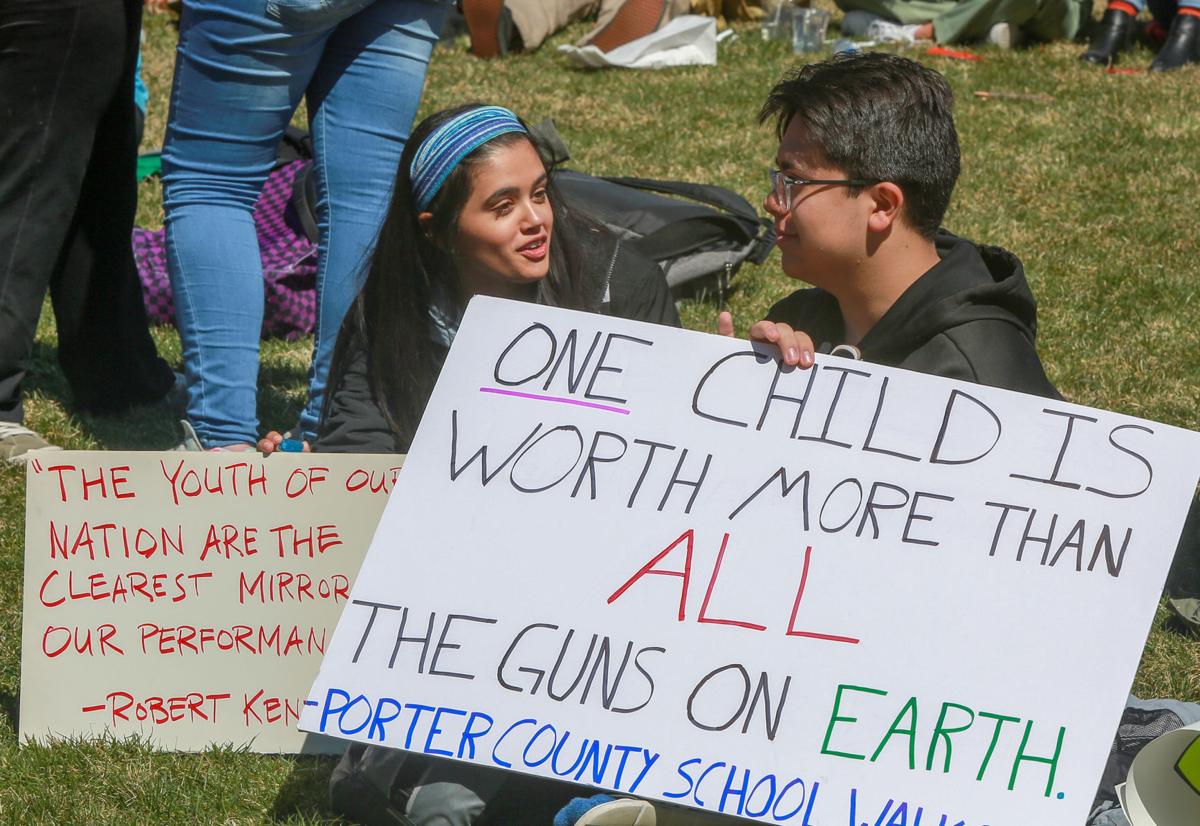 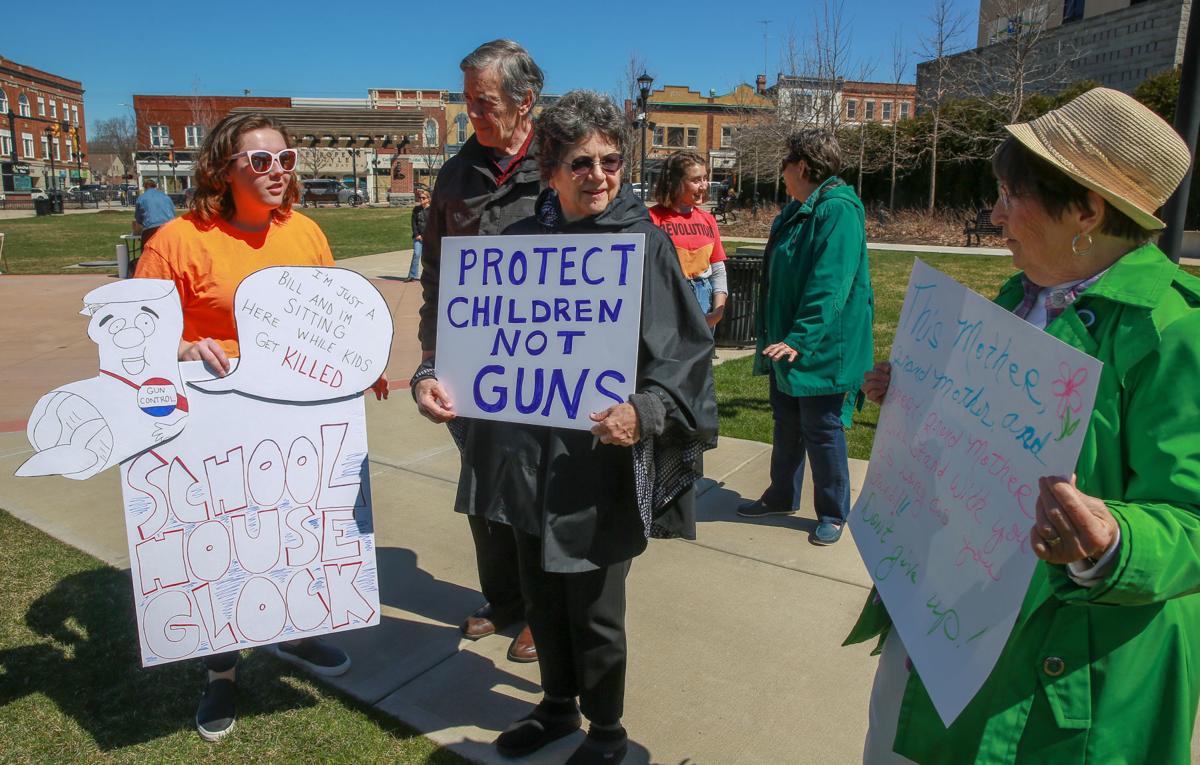 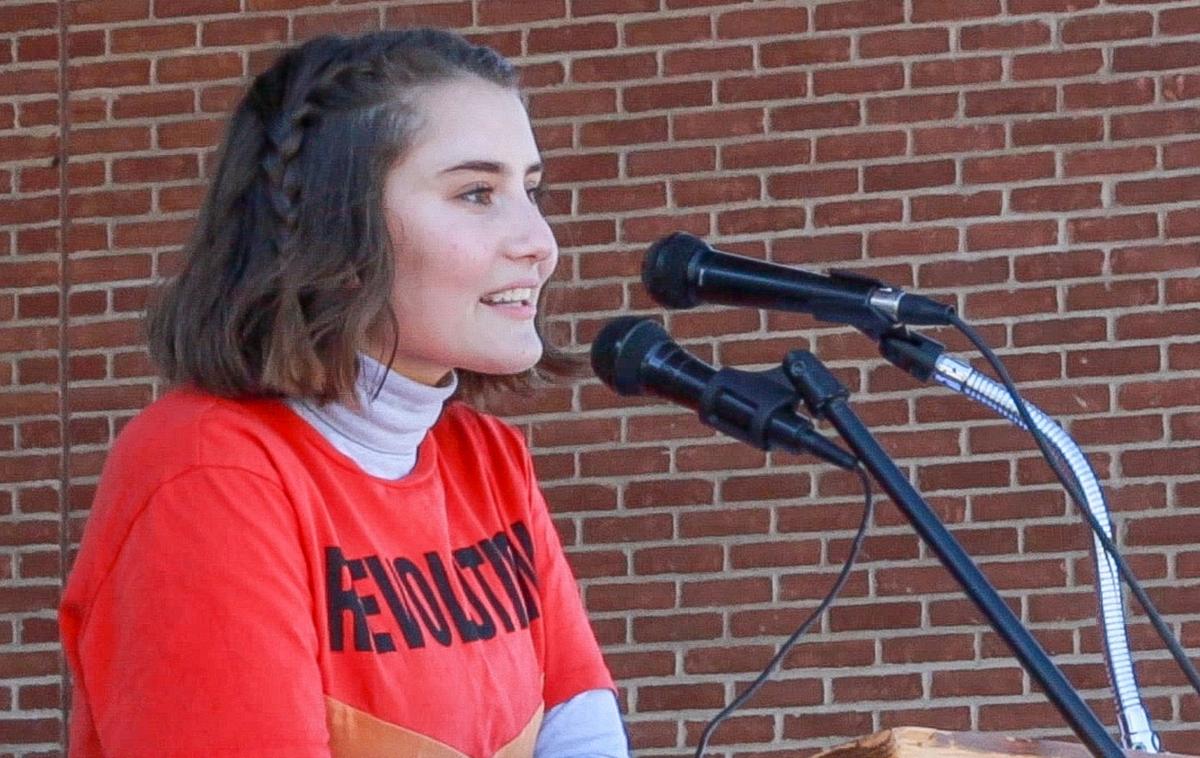 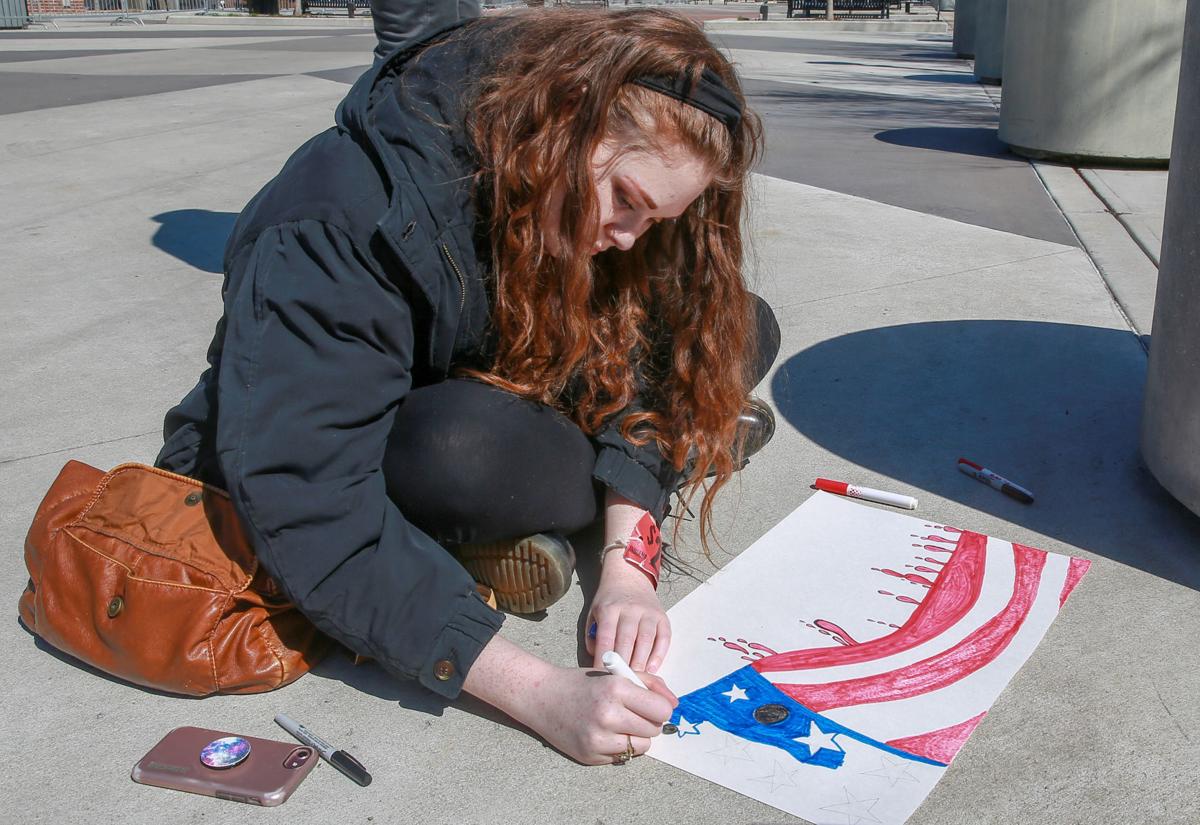 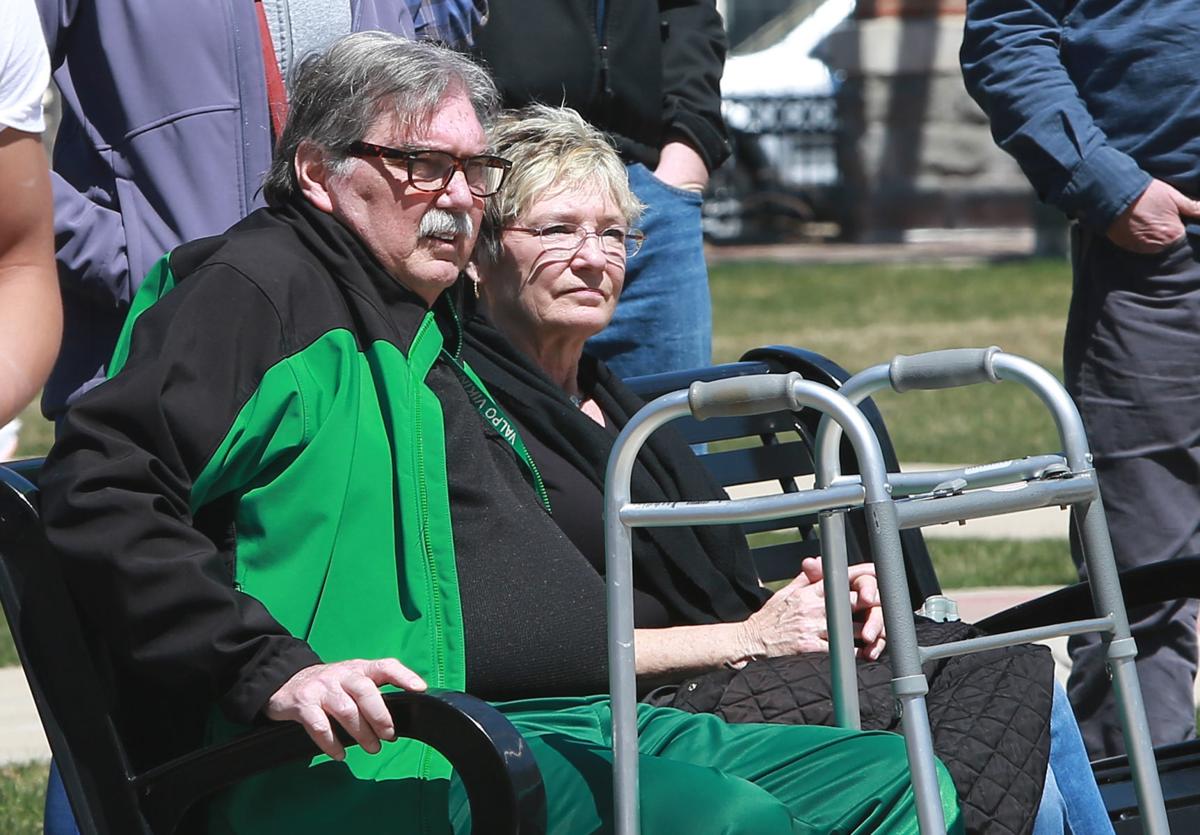 Valparaiso Schools superintendent E. Ric Frataccia and his wife Kaye were on hand to show their support.

Students from across the Region left their classrooms Friday and raised their voices.

"This is our world and we have the right to change it," said Ollie Grcich, a Valparaiso High School senior and one of the organizers of the Porter County Never Again national school walk out.

"We don't want to get killed by guns in school. We've seen the violence. We are ready for a change, and we are going to make that change."

Valparaiso High School students walked out of their school around 10 a.m. to Central Park Plaza in downtown Valparaiso where they were joined by students from Chesterton, Kouts, Washington Township and Wheeler high schools. More than 200 students and a dozen or more adults attended the rally, which featured speeches and musical performances.

Portage High School students also marched out of their classrooms, but many refused to follow school officials' directions.

PHS student James Mulvihill said while many students did go to the football field where a microphone was set up and the choir was scheduled to sing, another group marched out to the front of the school.

Mulvihill said while a March 14 walkout was designed to offer moments of silence for the 17 killed in Parkland, Florida, students wanted a chance to have their voices heard at Friday's rally and not duplicate what was done a month ago. Mulvihill said students spoke, but school officials and police were encouraging them to move back into the building.

About 25 high school students, many carrying signs, marched from their LaPorte High School classrooms to the courthouse less than a mile away to demonstrate peacefully.

Residents of all ages gathered Friday evening for a candlelight vigil at the Old Lake County Courthouse to honor the 19th anniversary of the Columbine High School massacre and those killed two months ago in a mass shooting at a Florida high school.

Sokhna Kelly, a junior at Crown Point High School and sophomore Jniya Johnson organized the vigil and walk to the Lake County Fairgrounds, partnering with the Hobart Unitarian Universalist Faith and Action group. The students also organized the March for Our Lives walkout in March.

“We’re not against walkouts,” said Kelly, adding that the vigil gives students options to continue the movement.

“The gun shootings need to stop,” she said. “They could be us, or our friends. They need to stop.”

Chesterton High School senior Chloe Mounts said before her fellow students left for the Valparaiso event, there was a lockdown drill at the school.

"It is kind of absurd that we are always having to question our safety," said Mounts, adding she attended the rally to send a message to lawmakers.

"They haven't been able to protect us in the past. We have to protect ourselves," Mounts said.

"The only thing my agenda includes is having less dead children," said CHS senior Katelyn Balakir in a speech from the park's stage.

Balakir said students are tired of waiting for adults to take action to protect them, that putting off serious talk about gun control will only allow mass shootings to continue.

"They have a job to do and we, the people, will make damn sure it gets done," she said.

"Before I go to school, instead of thinking what outfit will I wear, I wonder if I'll come home safe," said VHS freshman Aracely Chalpeno, who criticized President Donald Trump and other elected officials for their inaction. "We were promised America would be made great again, and that hasn't happened."

"I don't totally agree with the gun control debate, but I am for safe schools," said Kouts High School senior Pierce Fischer, adding he believes the two extreme sides need to sit down, "create a dialogue and create a solution."

There was no organized counterprotest at the Valparaiso rally, but two vehicles could be seen in the area driving around, with passengers waiving flags proclaiming support for Trump and saying, "Don't Tread on Me." The drivers eventually got out and were invited to stay at the rally.

"Our generation blew it," said Mary Anne Crayton, of Valparaiso, adding she was upset VHS was not being supportive and giving students detentions for walking out.

Grcich said VHS students wear those detentions "like a badge of honor."

"We take it in stride and wear with pride on our sleeves," she said, adding that the students will continue the movement by informing other students on the issue and encouraging them to vote.

The message from students in the LaPorte walkout was support for gun rights but not gun violence in the schools.

"It needs to end," said Alexia Cook, a LaPorte junior.

Some students said they still feel safe, but when the unexpected happens like a power outage they wonder for a moment if it’s the work of a school shooter.

Kaelyn Oman, a senior, said political lines should be dropped to get to a solution.

"We have innocent people and kids dying," she said.

Delaney Bluhm, a junior, said the turnout was from talk on social media and permission was received from their parents to miss school.

CHESTERTON — There's a lot you can do with plastic instead of tossing it in the trash.

Boil water advisory issued in Valparaiso along U.S. 30 due to water main break

VALPARAISO — Valparaiso City Utilities will restrict traffic to one lane on a portion of U.S. 30 eastbound to repair a 16-inch water main brea…

VALPARAISO — The City Council will soon begin the process of appointing its next Valparaiso Community Schools board member.

PORTAGE — Lenburg Road will be closed to through traffic from 7 a.m. Thursday, may 3 through approximately 6 p.m., Monday, May 7 for resurfaci…

DALLAS — Taking a break from the escalating pressures of the Russia probe and the Stormy Daniels case, President Donald Trump returned to his …

GARY — In an effort to curb gun violence in the city, Attorney General Curtis Hill joined faith leaders and local officials Friday to kick off…

About 25 LaPorte High School students recognized the 19th anniversary of the school shootings in Colombine during a demonstration to stop gun violence Friday outside the courthouse.

Lianna Lewis, a LaPorte High School junior, was among 25 students demonstrating outside the courthouse Friday to call for a stop to gun violence in schools.

One of the Never Again school walkout organizers Ollie Grcich from talks with a group of students waving a "Trump" flag to tell them they are welcome but to please not instigate and problems.

Valparaiso Schools superintendent E. Ric Frataccia and his wife Kaye were on hand to show their support.