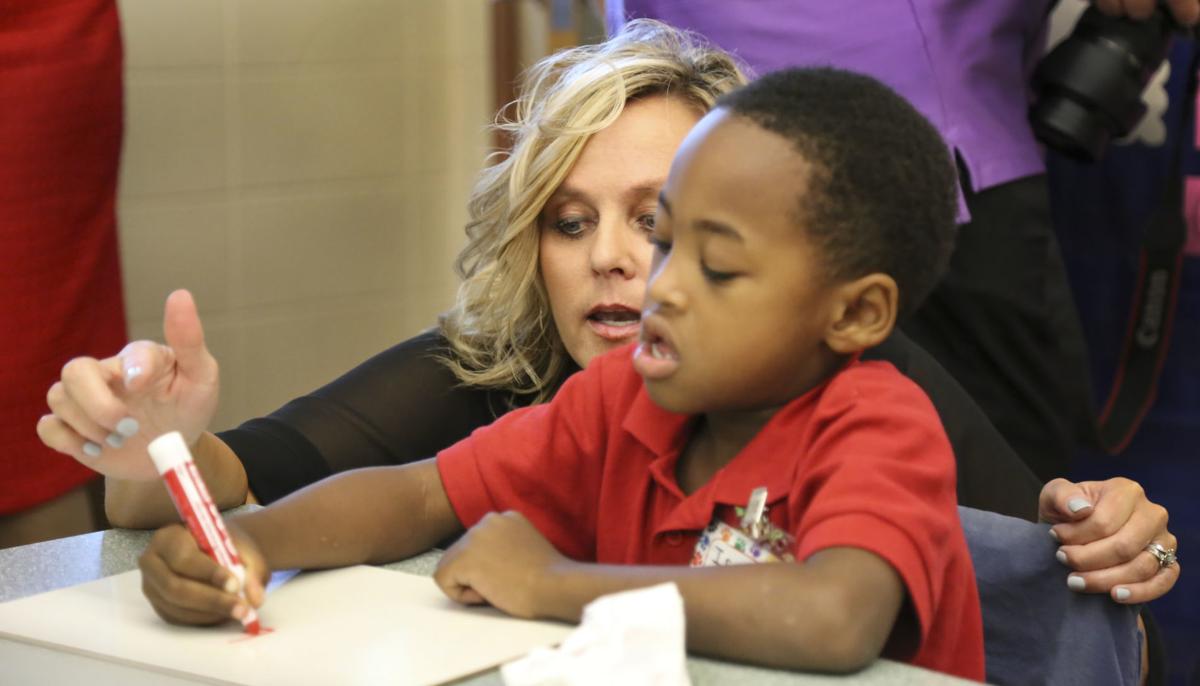 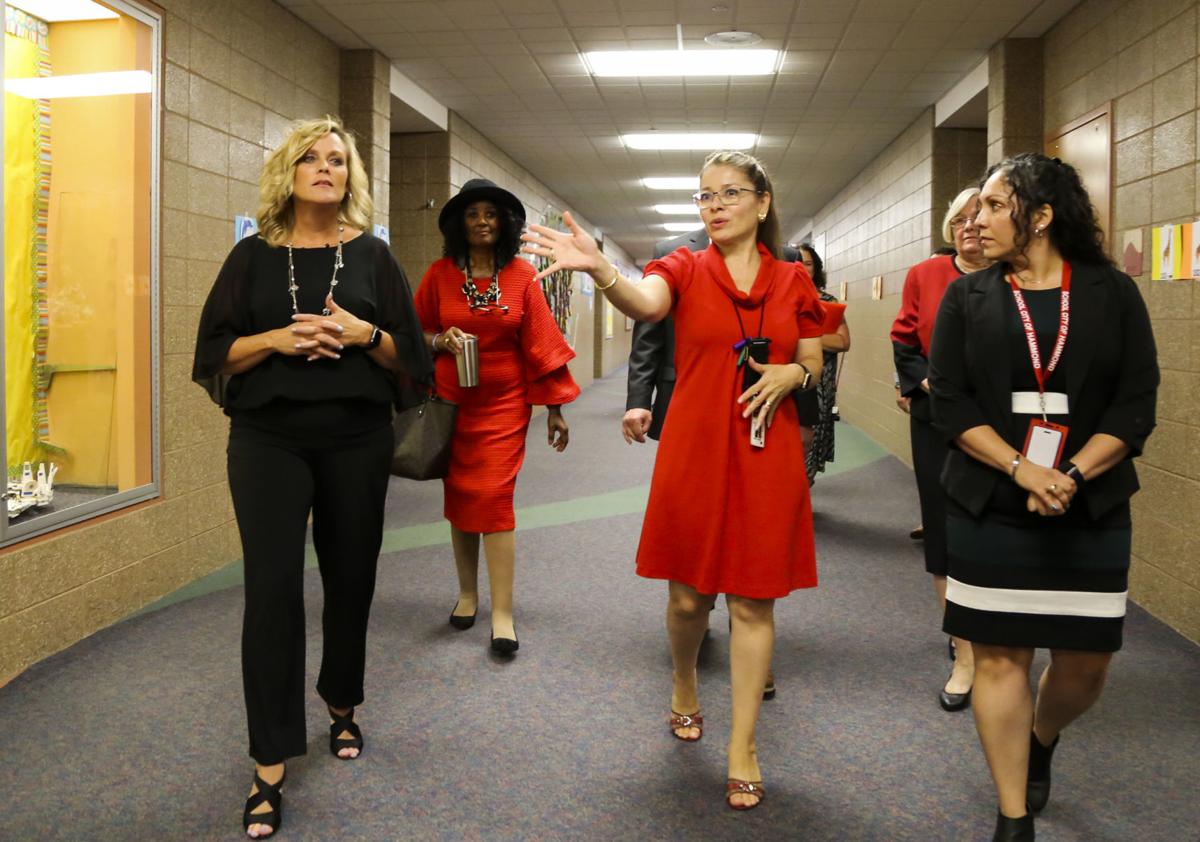 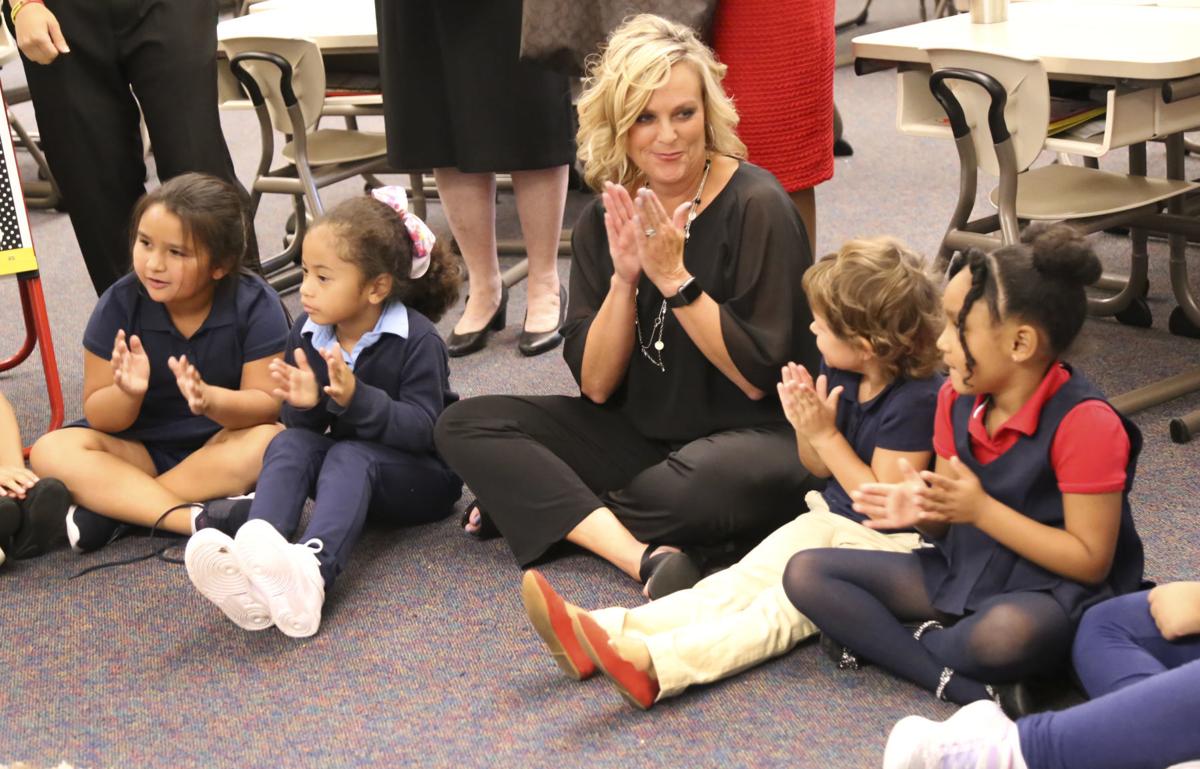 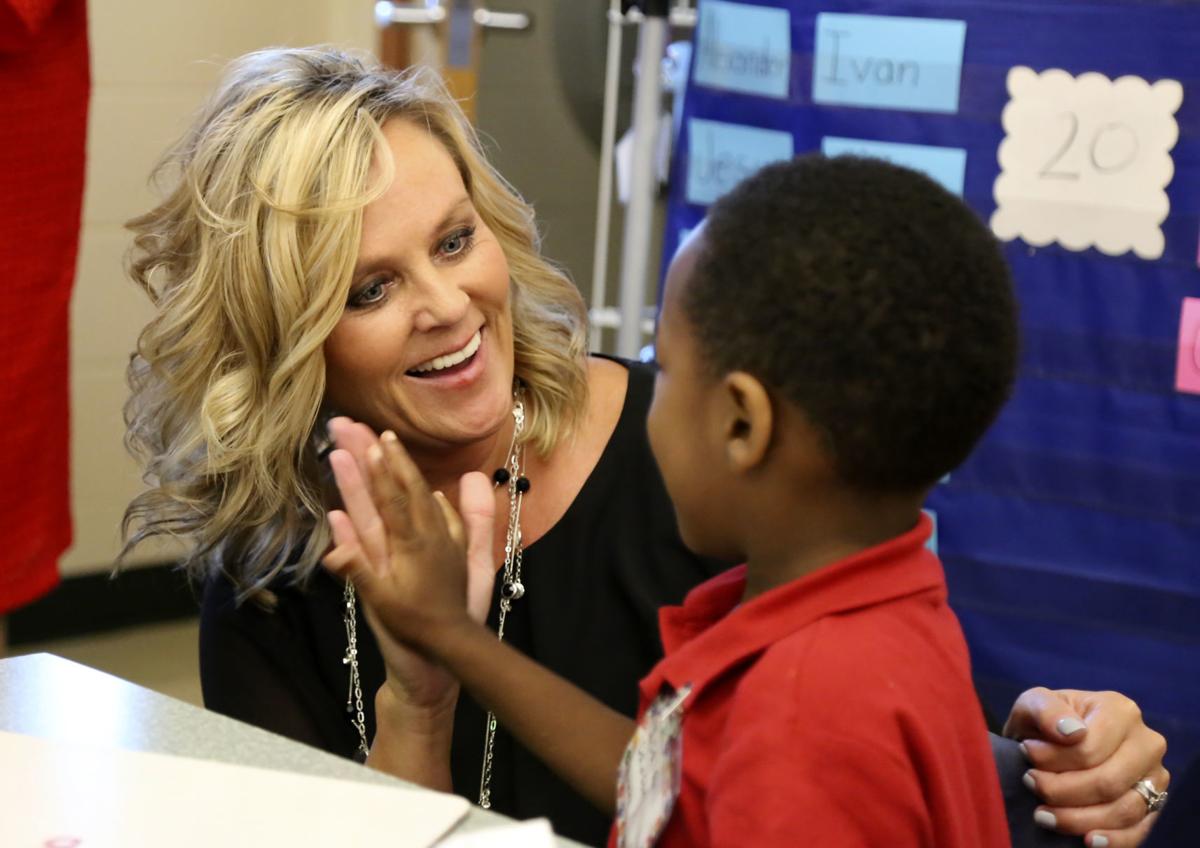 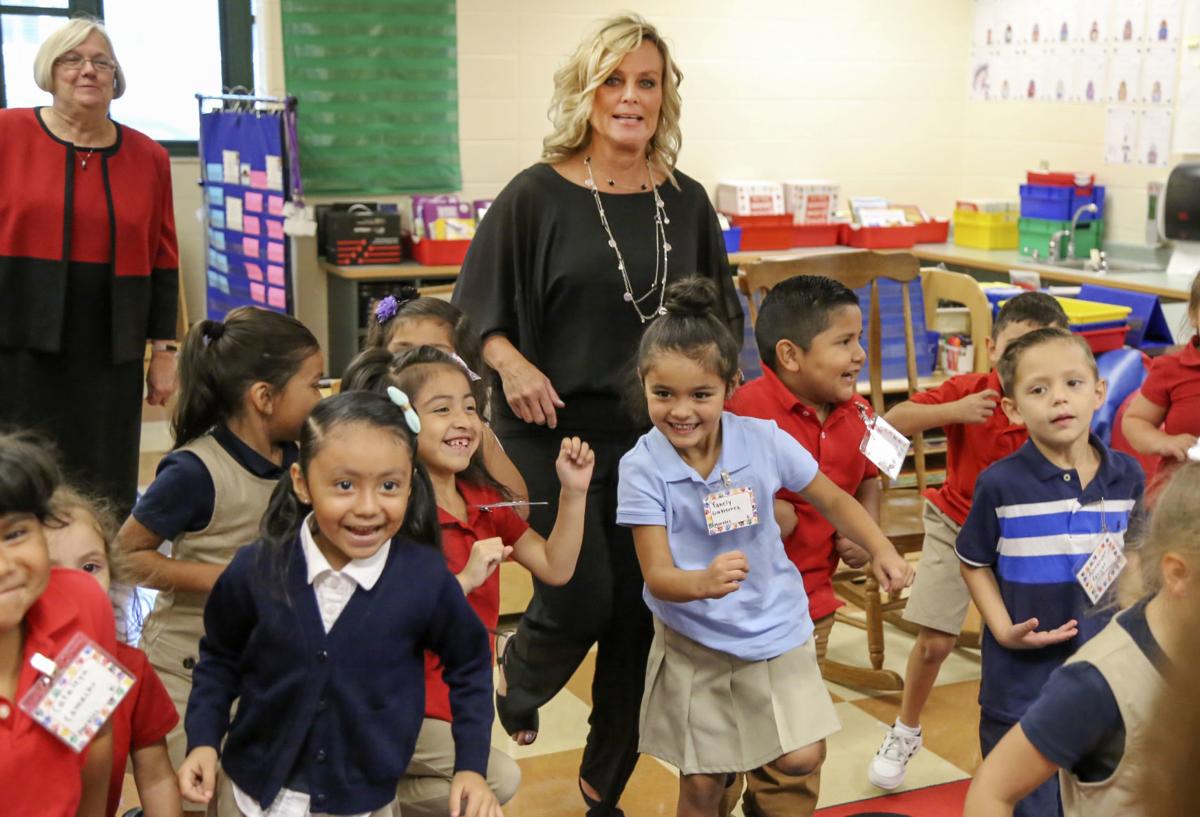 Indiana Superintendent of Public Instruction Jennifer McCormick does language exercises with students Thursday at Irving Elementary during a tour of the school. 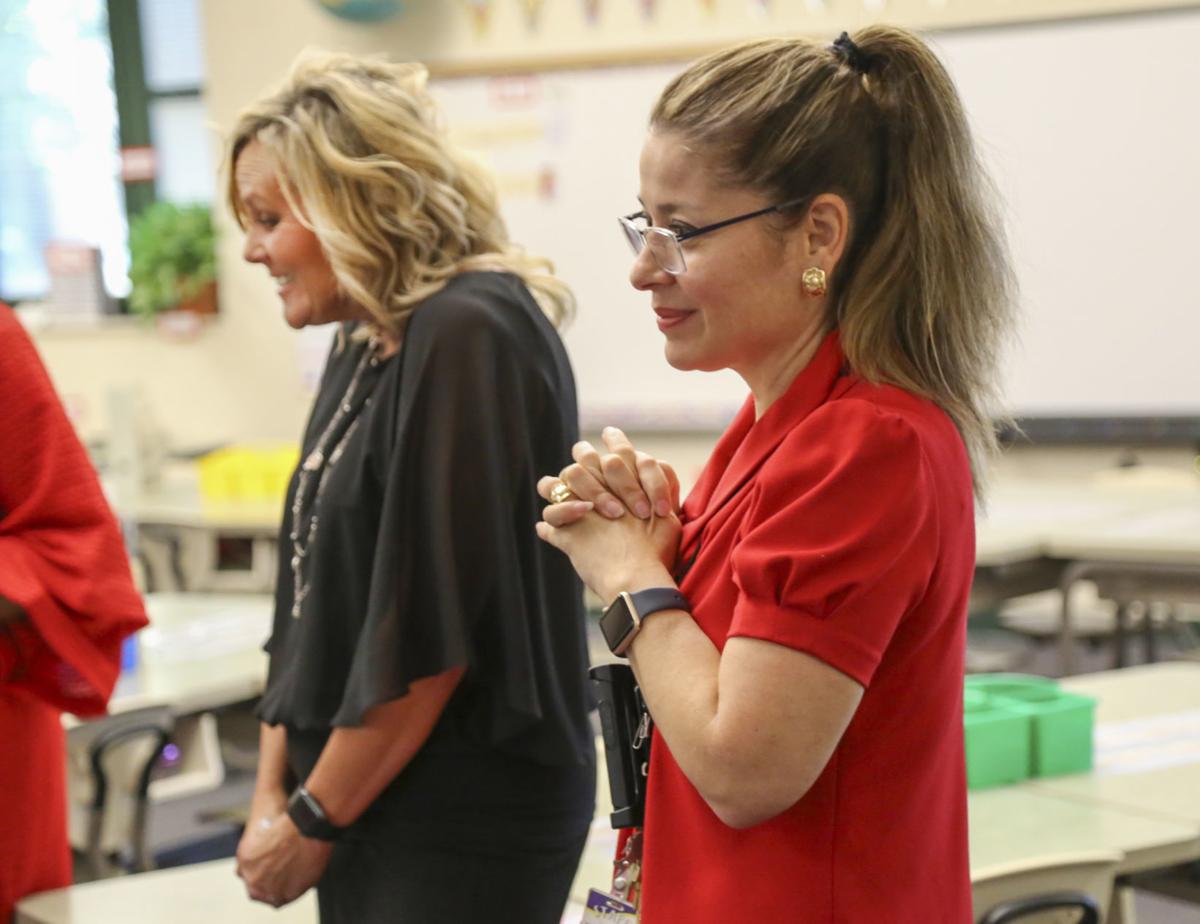 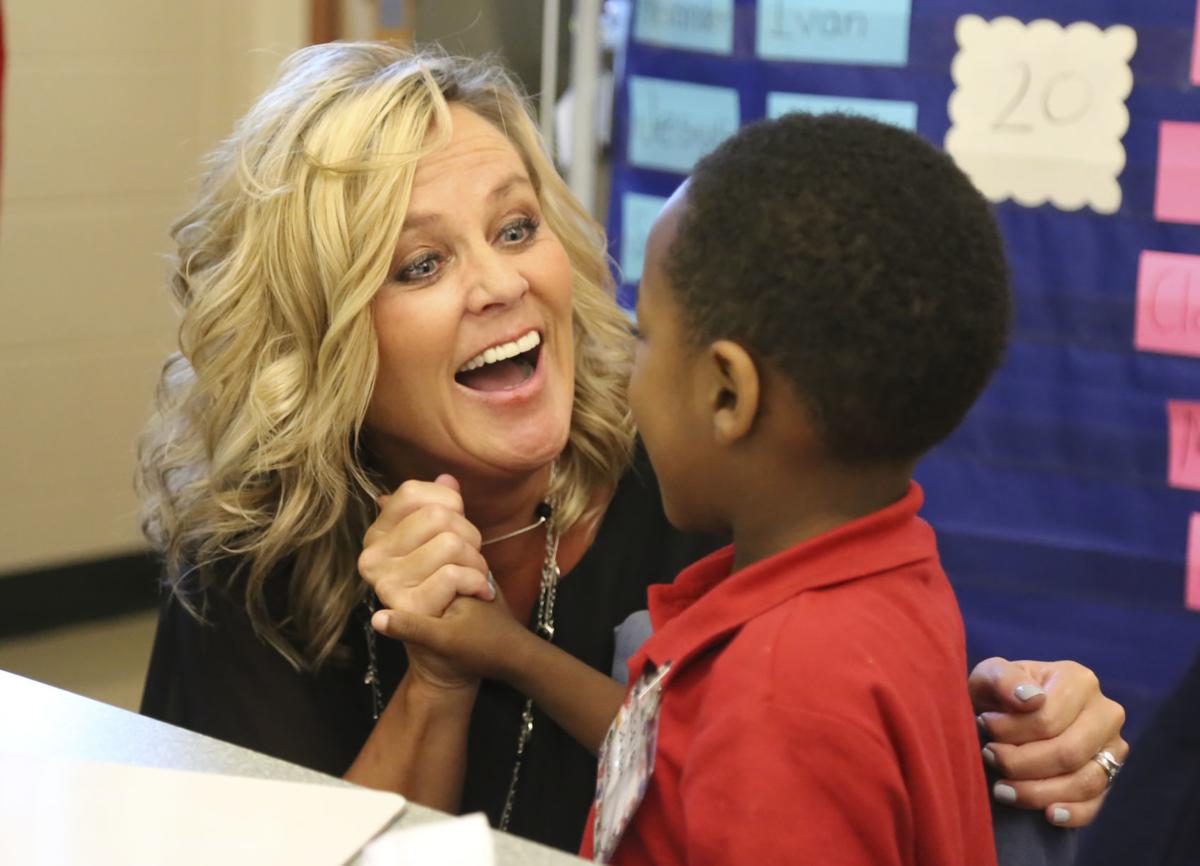 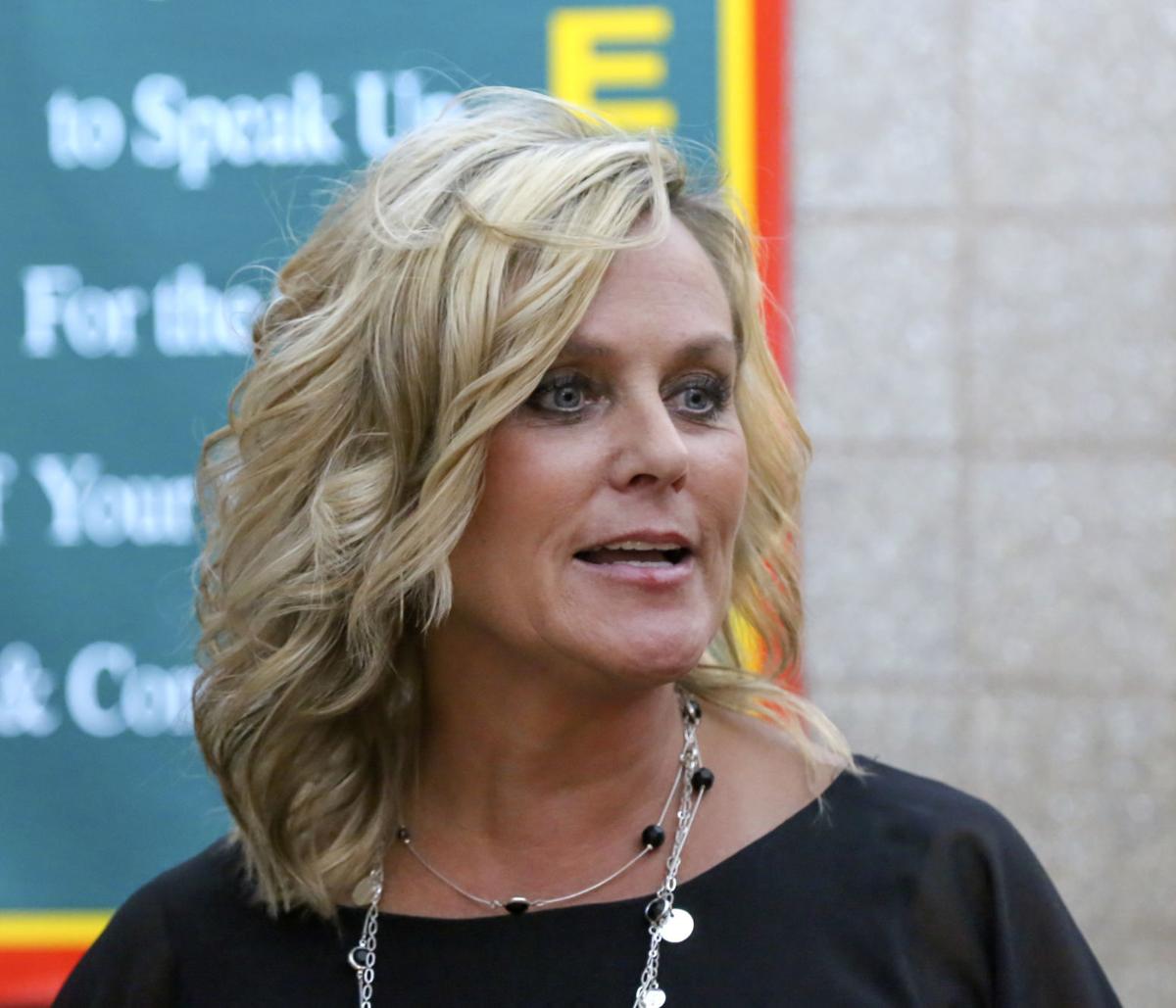 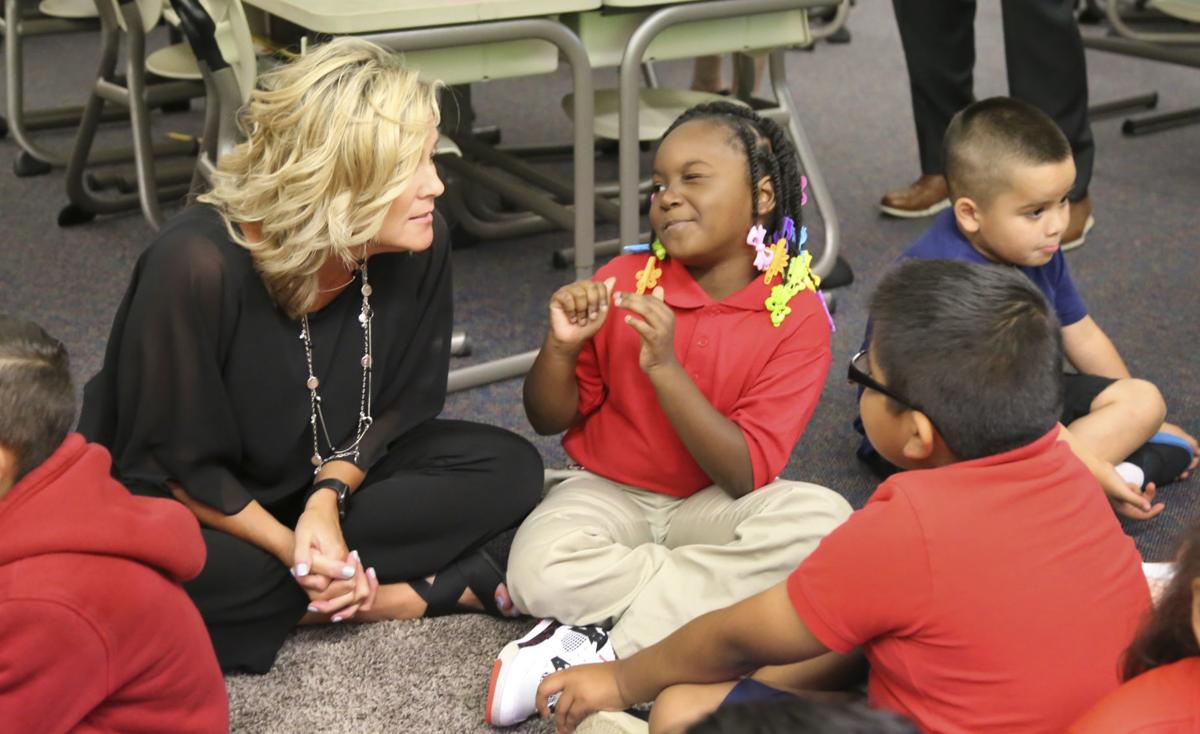 The superintendent started her day presenting on college and career readiness as a part of the state’s new graduation pathways at Hobart High School.

She then visited the School City of Hammond’s new Dual Language Immersion program at Irving Elementary — teaching three kindergarten and first-grade classes in 80% Spanish and 20% English — before meeting with Region educators and taking questions on the state of education in Indiana.

On ILEARN and accountability

Over the past two weeks, individual school districts have received the results of the state’s first ILEARN assessment, a replacement to the former ISTEP+ exam.

While performance results will not be made public until next week, McCormick and others have confirmed the results of the state’s first computer-adaptive test have been low — so much so that school accountability and teacher pay, both influenced by the standardized test results, could take large dip this year.

McCormick addressed educators’ concerns explaining that the exam — carrying a more rigorous assessment of third- through eighth-graders’ college and career readiness — was a one-time snapshot of student performance and not reflective of the entire educational experience.

Scores from this spring’s ILEARN assessment have prompted several high-ranking Indiana lawmakers, the governor included, to call for a "hold harmless" for the scores’ effect on A-F accountability grades.

McCormick’s department took those calls a step further Wednesday, asking for a pause on intervention timelines, meaning low ILEARN performance this year would not be factored in to the state’s threshold for a school takeover.

The IDOE is pushing to give the Indiana State Board of Education emergency authority to review the structure of the state’s A-F school accountability system, which McCormick said has needed to be fixed since the 2014-15 rollout of ISTEP+.

“Our state accountability has not been modernized to take that hit,” McCormick said of the effect ILEARN results could have on both current and future A-F school grades.

As structured, the state’s A-F school accountability grades are based on a two-indicator calculation, relying heavily on standardized test results to formulate a school grade.

The federal A-F accountability system, which McCormick said is more reflective of school improvement, is based on five factors, weighing ILEARN results more broadly against other considerations.

On teacher pay and retention

Teachers and students in the Hammond Area Career Center lunch also wanted to hear from the state’s top education official about what can be done to increase teacher pay and retention in Indiana public schools.

McCormick echoed educators’ concerns, citing an immediate need for greater school funding. She expressed frustration with the governor’s Next Level Teacher Compensation Commission, which conducted the last of its three public listening sessions this week.

The commission composed of business executives and community leaders only has one IDOE member serving in an advisory position and is due to present its report at the end of 2020, ahead of the state assembly’s next budget session.

“We are short teachers now, we’re short funding now,” McCormick said. “We are pushing this can down the road. My question is, ‘Do we want solutions or not?’”

McCormick said the IDOE has been idea-seeking in its own meetings with local teachers, school finance officers, principals and superintendents looking to reverse the growing trend of teachers serving on emergency permits to mitigate the state’s growing teacher shortage.

“We must have very candid conversations and use data,” McCormick said. “We’ve got data, we’ve got great resources, we’ve got smart people in our state. We’ve got to bring them to the table.”

On the future of education leadership

The superintendent said she feels some state lawmakers have grown more receptive when presented with statistics, like an increasing number of teachers serving on emergency permits — 3,500 this year — or Indiana’s position as last in the country to provide teacher salary increases since 2002.

Though, many have fears about the future of education leadership in Indiana with McCormick serving as the last publicly elected schools superintendent in Indiana — a decision signed into law this spring by Gov. Eric Holcomb.

With the state Board of Education being filled by governor and General Assembly leadership appointments only, some educators worry the state will lack an education voice capable of challenging state leadership.

Naja Nixon, a senior at Gavit High School and the Hammond Area Career Center, sat near the front of the room for McCormick’s Thursday afternoon Q&A. Nixon, who hopes to become a kindergarten teacher through her studies in the career center’s education pathway, said the conversation helped bring her a better understanding of the funding issues facing Indiana teachers today.

“We need to keep our sights on what we could be doing instead of what we can’t be doing,” Nixon said. “We need to stay informed and focus on building education for the children.”

With the results of student ILEARN testing to be made public next week, Indiana officials are calling on lawmakers to place a delay on the imp…

INDIANAPOLIS — Gov. Eric Holcomb, or his successor elected in 2020, will appoint the next leader of the Indiana Department of Education, inste…

UPDATE: Indiana students test low on new standardized exams: Here's a look at data and what it means for future of education in state

Fewer than half of Indiana students tested proficient in the state's new model of standardized testing.

Educators and parents are weighing in following the public release of Indiana’s first spring ILEARN assessment results, which showed more than…

Teacher on leave after video challenging use of N-word goes viral, superintendent says

HAMMOND — A Morton High School teacher is under investigation after a 43-second viral video shows a student challenging the use of the N-word.

With no new A-F grades in place, state Teacher Appreciation Grant funds are due to schools Dec. 5.

INDIANAPOLIS — After four months of study, the Indiana State Board of Education’s School Accountability Panel made its final recommendations f…

The governor says he plans to prioritize further study of teacher pay, the effects of unfunded mandates on educators and response to the state's ILEARN exam in 2020.

Arrangements have been made for remembering longtime Hammond education leader Walter Watkins. Here's where and when services will be this week.

Indiana Superintendent of Public Instruction Jennifer McCormick does language exercises with students Thursday at Irving Elementary during a tour of the school.