GARY — The Gary teacher who handed a fifth-grader with autism an award titled “Most Annoying Male” claims she is being made a scapegoat in the Gary Community School Corp.’s investigation of the May 23 incident.

Alexis Anderson-Harper, who taught fourth- and fifth-grade special education classes this year at Bailly Preparatory Academy, said Gary school officials have rushed to act under intense scrutiny brought by the story that has attracted national media attention since it was first reported by The Times on Monday.

Anderson-Harper is one of three teachers who have been given notice that their contracts with the public school corporation should be canceled.

A Gary schools spokeswoman confirmed Saturday that Anderson-Harper, along with Bailly fifth-grade teachers Bianca Jones and Crystal Beeks, has been served a preliminary determination notice of contract cancellation following an investigation led by Michelle Cooper, an education attorney with the law firm Lewis Kappes.

The three teachers will have the opportunity to appeal the school’s preliminary decision before contract cancellation is made final.

Royal, Jones and Beeks did not reply to requests for comment Saturday.

“The main focus continues to be on the well-being of the children in the Gary Community School Corporation,” Gary schools spokeswoman Chelsea Whittington said in the provided statement. “The team is working to ensure that an occurrence of this nature never happens again.”

Two parents in attendance of the May 23 end-of-year lunch at the Merrillville Golden Corral told The Times this week they were shocked by the awarding of the trophy at what was supposed to be a celebratory event.

Rick Castejon, father of the Bailly fifth-grader called “Most Annoying Male,” said he watched as his son’s teacher, Anderson-Harper, handed his 11-year-old son the trophy in front of other teachers, parents and students.

Castejon’s son, who has autism, is nonverbal and commonly rocks back and forth, the father said.

Both Castejon and Marlene Jones, whose daughter was also in Anderson-Harper’s class, said they saw the awarding of a second “Most Annoying” trophy to another student.

While Castejon said his son was not offended and did not understand the meaning of the trophy inscribed “BAILEY PREPARATORY ACADEMY 2018-2019 MOST ANNOYING MALE,” the father said the other student, not in his son’s special education class, was teased by other Bailly fifth-graders as he was called up to retrieve his trophy.

“Just in general, why would you give out an award for Most Annoying?” Castejon asked.

In separate interviews, both Castejon and Jones said teachers at the event placed the responsibility on students, telling the parents all Bailly fifth-graders took a vote for the class superlatives and teachers were simply there to hand out the awards.

Anderson-Harper confirmed this in an interview with The Times on Saturday, saying fifth-graders were given ballots for awards to be presented to one male and one female student.

The teacher characterized the superlatives as a “Students’ Choice Awards” celebration.

Descriptors were provided for each award category. The “Most Annoying” designation was defined on the ballot as “usually bothering, teasing, or disturbing others.” 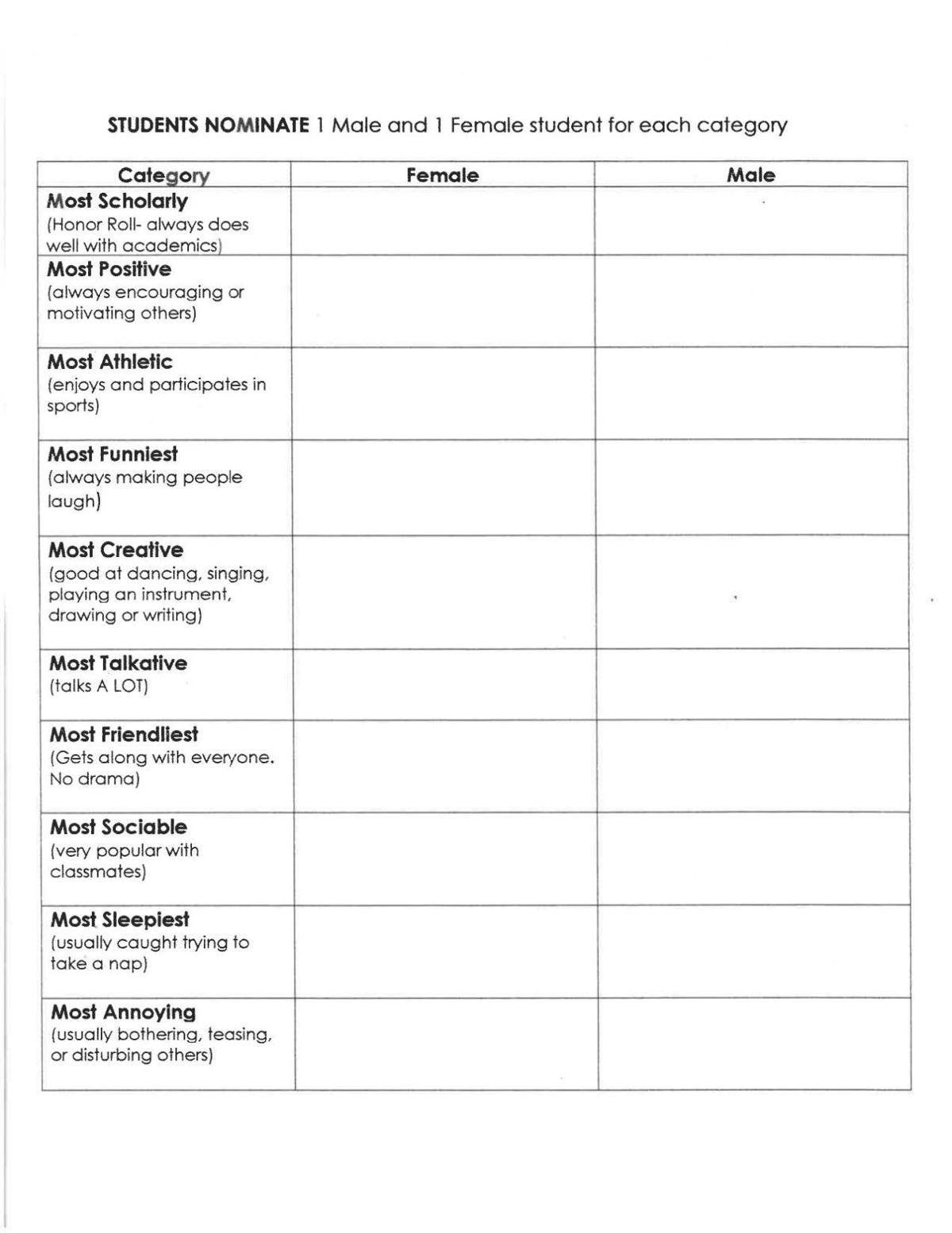 Anderson-Harper, who said she’s been teaching with Gary schools for nearly 15 years, told The Times two other fifth-grade teachers on an awards lunch committee prepared the student voting ballots, which were brought to her classroom by a student runner, or assistant.

Anderson-Harper said her students recently had been learning in class about presidents and governments and that she saw the students’ opportunity to vote for the superlatives as a way to exercise the class standard.

The special education teacher said she discussed each category with her fifth-grade students who voted within her classroom on some of the categories such as “Most Scholarly,” “Most Positive,” “Most Funniest,” “Most Creative” and “Most Friendliest.”

She said the class did not vote for others like “Most Athletic” because none of her students were on the school’s sports teams.

She said when students finished voting, two in her class were nominated for “Most Annoying.” She then returned the ballots to the two organizing teachers, Anderson-Harper said.

The teacher said she did not realize any of her students were selected overall for the fifth-grade’s “Most Annoying” title until she was asked on the day of the awards lunch to hand trophies to the students as another teacher read the names of winners.

She said she did not know how the categories on the ballot were selected or how her students’ own votes were factored in to the totality of the fifth-grade voting system.

“I don’t know how it came about,” Anderson-Harper said. “In hindsight, I think they could’ve used different wording.”

Regardless of his teacher’s culpability in creating or assigning awards, Castejon said the teacher should have done more to prevent the award being presented.

“You should have protected my son no matter what,” Castejon said. “Your job should’ve been to say, ‘We’re not going to give this one out.’”

Castejon said he was taken aback by the award given to his son, but decided not to speak up until after discussing it with his family later that night.

Morikis acts as superintendent for the district, which was taken over by the state in 2017.

Gary schools confirmed district officials first became aware of the incident the evening of May 23 and opened an investigation the following day.

Anderson-Harper provided The Times with a copy of a notice dated May 24 informing her the trophy presentation was inappropriate and that future failures to adhere to conduct standards could result in disciplinary actions.

“Gary Community School Corporation deems this behavior unacceptable,” the letter reads. “The end of the year awards ceremony is designed to recognize students for their accomplishments throughout the school year. As the classroom teacher, it is your responsibility to make sure that you treat students, staff, and parents with dignity and respect, not to make any disparaging comments about them.” 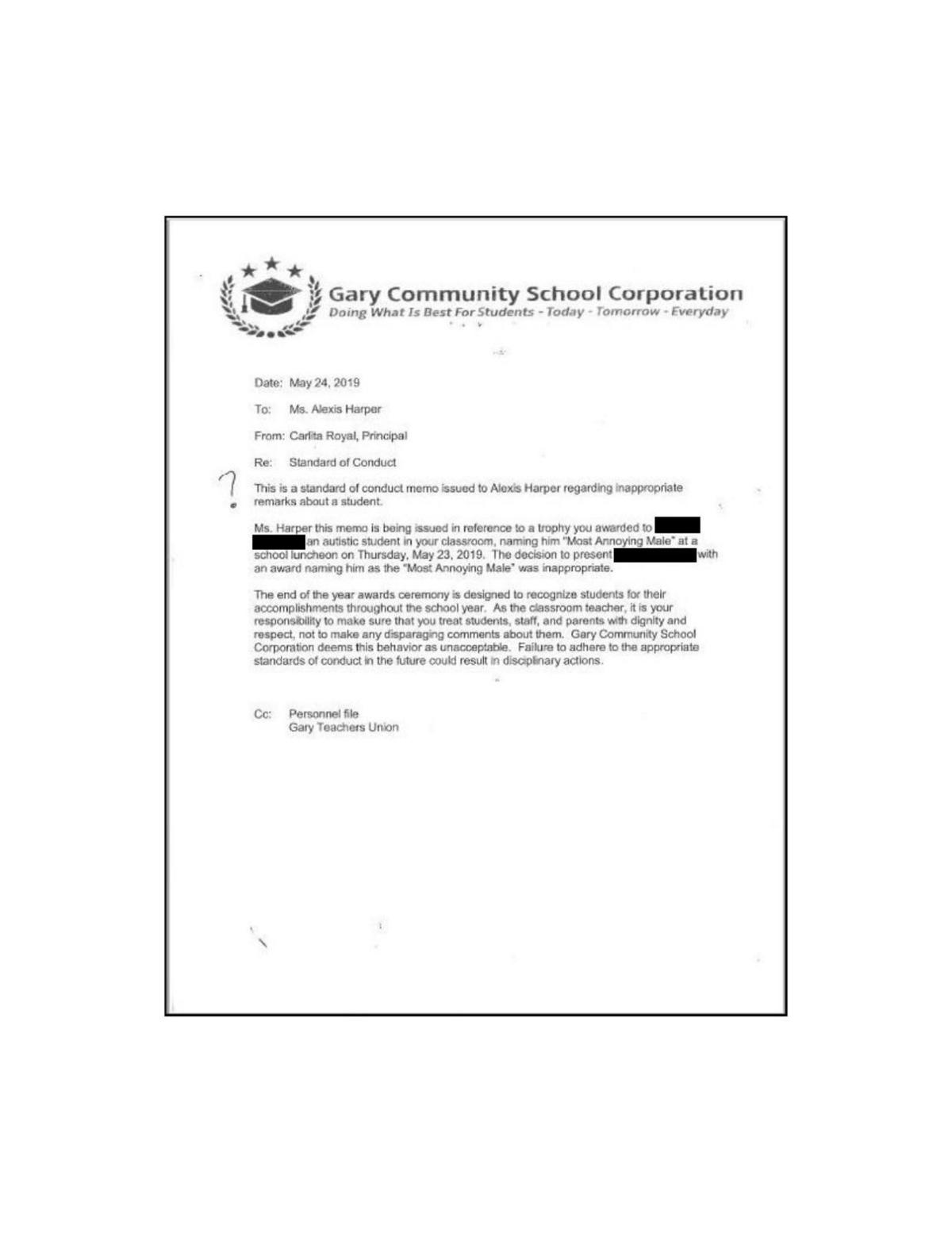 The district then issued Anderson-Harper a second letter spelling out the findings of its investigation and its intent to terminate the teacher’s contract.

In it, the school corporation acknowledges two other teachers played a role in creating the “Most Annoying” award.

“You failed in your duty to be an acceptable role model to your students by participating in the process to hand out these inappropriate awards,” the letter reads.

Throughout the investigation, Anderson-Harper said she was only contacted to discuss what happened by Bailly’s principal, who appeared supportive of her, and Gary schools’ human resources director, whom Anderson-Harper said cut her off before giving her a chance to explain her role in the awards presentation.

The Bailly teacher expressed bewilderment at the district decision to move forward in canceling her contract without having heard her explanation.

“I feel like my livelihood is being taken away from me,” Anderson-Harper said. “You’re playing Russian roulette with my life.” 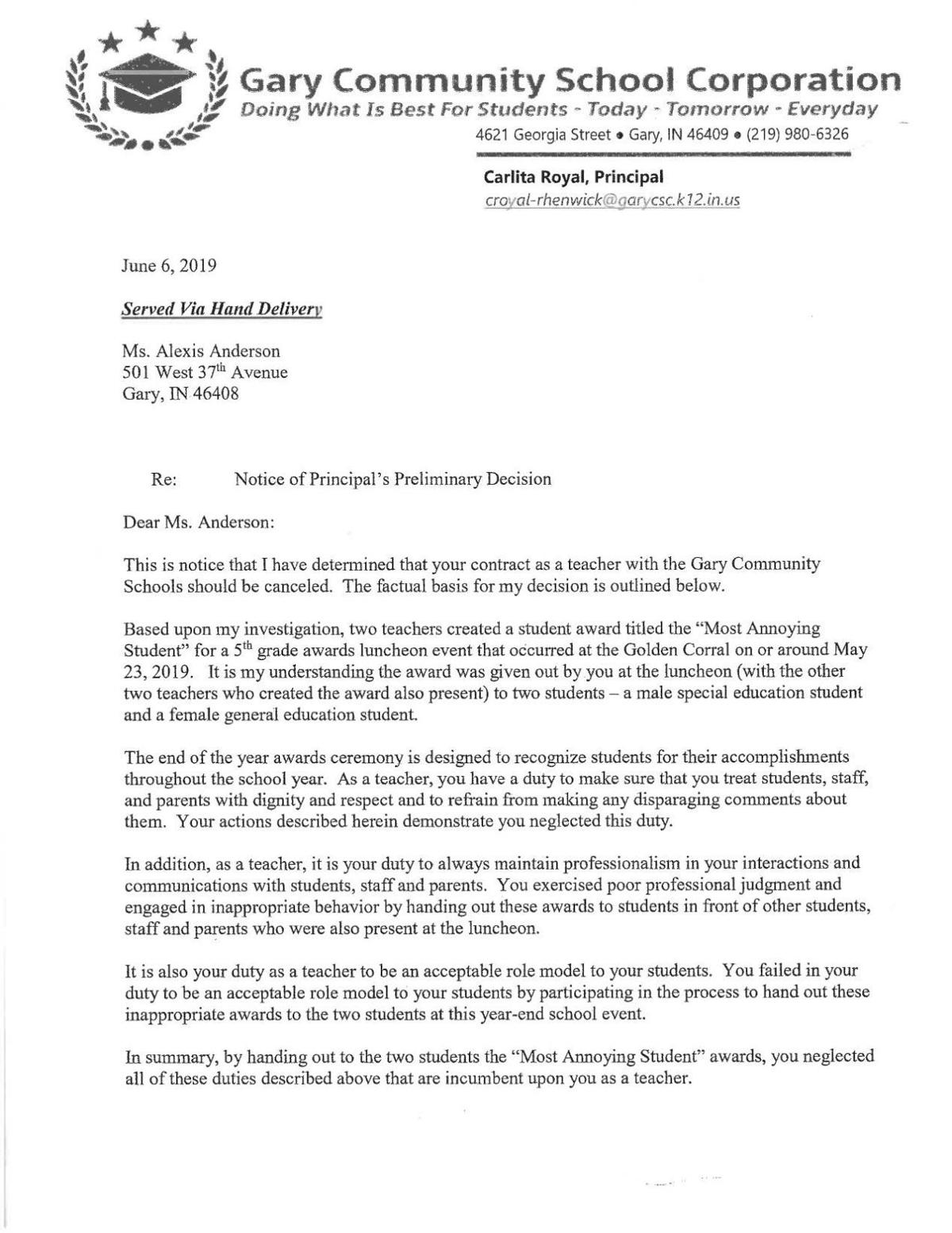 Michelle Cooper, of Lewis Kappes, said in a prepared statement the district issued its preliminary determination notice following conversations with both the family involved and Bailly’s principal, who was provided the three teachers’ version of events.

“If the teachers have additional information they want to provide beyond the information they provided to their principal through the investigation, then they will have that opportunity through the due process procedure that had been initiated,” Cooper said in the statement.

“We were prepared to even fight the written reprimand,” Anderson-Harper’s attorney, Rinzer Williams III, told The Times. “Clearly at this point if we’re not able to reach an amicable solution by the means of which they’ve set out in these letters, we’re prepared to take every legal action necessary to give Ms. Anderson her good name back.”

When asked this week if the Indiana Department of Education would pursue its own investigation of the Bailly Preparatory Academy, a department spokesman said, “It is too early at this time for the department to comment.”

Morikis and Douglas addressed the May 23 lunch in a Tuesday interview with WLTH AM 1370 radio. Douglas said in the interview the district would be providing cultural sensitivity training to its teachers this summer.

“The whole culture needs to shift,” Douglas said in the Tuesday interview. “There are some staff members I’m comfortable with and some I’m quite frankly very uncomfortable with. We have some folks that are rough around the edges when it comes to dealing with children, and I believe in a gentler approach.”

The public embarrassment comes as Gary schools, operating under a state takeover and years of declining enrollment, launches a new campaign to attract Gary families fleeing to neighboring districts or nearby charter schools back into the school corporation.

The Indiana Distress Unit Appeals Board, which assumed decision-making responsibilities for the district with the state’s 2017 takeover, approved plans last month to open a second middle school in the school corporation in the Bailly Preparatory Academy building. Current Bailly students will move to Glen Park Academy.

”Emotional safety and well-being is paramount, and I think that’s where we missed the boat,” Douglas said Tuesday. “I am completely let down.”

As Castejon’s story swept the internet — The Times first reported on the ‘Most Annoying Male’ trophy online Monday evening and in print Tuesday — the Castejon family has received an outpouring of support from local business owners to parents of students with disabilities.

Readers from across the country have offered to send letters of support, replacement trophies and even scholarship funds to the family, though Castejon said he’s not accepting major gifts — just cards and notes of support. He said he’s looking to get in touch with the local Autism Society to direct supporters to make donations there in his family’s name.

Castejon said he never anticipated the attention sharing his story would bring. He said up until the point of the May 23 lunch, he thought Anderson-Harper was a good teacher and that he wasn’t looking to cause problems.

“My intention was never to get a teacher fired,” Castejon said. “I just believe someone should be held responsible.”

HARTFORD, Conn. — With no computer or internet at home, Raegan Byrd's homework assignments present a nightly challenge: How much can she get d…

5 important stories you need to know from the weekend: Teacher says she's a scapegoat after student with autism given 'Most Annoying' trophy

Gary teachers to be fired after 'Most Annoying Male' trophy given to student with autism, school district says

GARY — The Gary Community School Corp. has taken its first steps in firing three teachers related to the awarding last month of a "Most Annoyi…

GARY — A Gary father is expressing disbelief this week after his fifth-grader, who is autistic, was given a trophy dubbing him the "most annoy…

Our social vernacular has been abuzz in recent years with reports regarding how damaging bullying can be on the lives of children.

This letter to Bailly Preparatory Academy parents, provided by Alexis Anderson-Harper, shows the school's invitation to parents to join fifth-…