Educators from across the state plan to fill the Indiana Statehouse in a sea of red this week in one of the largest coordinated efforts of its kind in years.

Tuesday is being dubbed by public education advocates a Red for Ed Day of Action.

With more than a hundred Indiana districts calling off school that day, teachers from every corner of the state plan to rally in support of pay raises, school accountability and more ahead of the start of the 2020 legislative session.

What is Red for Ed Action Day?

Red for Ed — a national movement supporting greater funding and instructional supports for public educators — has seen growing waves of support with teachers rallying across the country in the last two years.

Most recently, 25,000 teachers marched the streets of Chicago during an 11-day strike, calling for increased student resources and smaller class sizes.

Indiana labor laws prevent teachers from officially “striking” or walking out of school. But more than a third of the state’s public school districts are closing and rescheduling makeup days or offering eLearning days on Tuesday as an increasing number of teachers call off work.

Tuesday, the first day of Indiana’s legislative session known annually to lawmakers as Organization Day, is now being recast by public education advocates as Red for Ed Day of Action.

Organization Day at the Statehouse has historically served as a day for legislators to announce their agendas and begin planning for the next session.

Educators are organizing specifically on this day in 2019 to send a message to lawmakers from the outset of the session.

“We’re hoping this brings attention to the issues and lets them know we’re serious,” MSD of Boone Township Superintendent Nathan Kleefisch said. “I hope they consider the impact of their decisions and how they impact schools.”

More than 120 districts across the state have called off or plan to offer alternative learning models like eLearning day on Tuesday, according to the Indiana chapter of the American Federation of Teachers.

An anticipated 15,000 supporters have registered their planned attendance with the Indiana State Teachers Association as of Sunday.

The two organizations will hold press conferences ahead of the 2020 session detailing what they hope to see from lawmakers this year. Indiana Superintendent of Public Instruction Jennifer McCormick will do the same, outlining priorities for the state’s Department of Education. 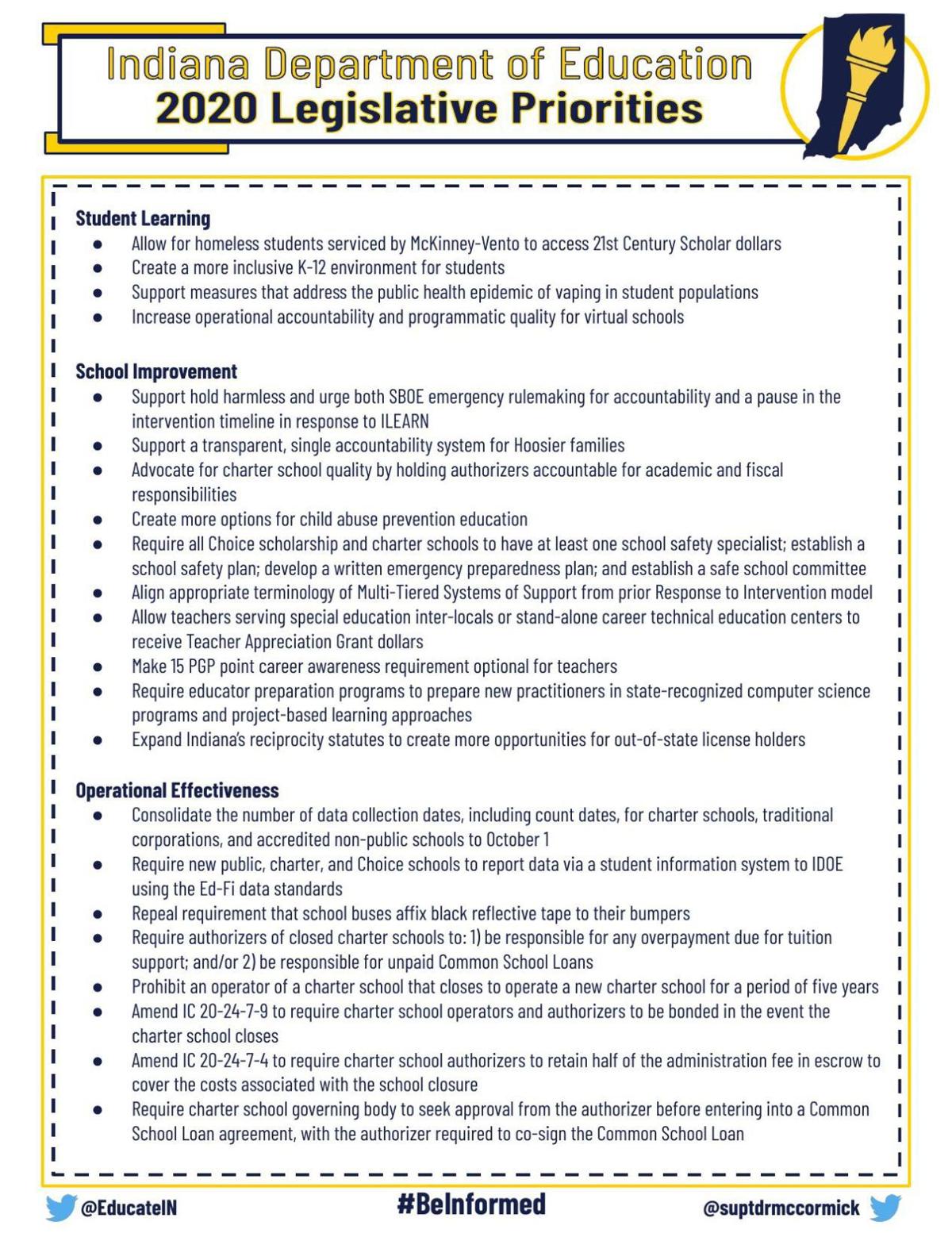 More than a dozen Northwest Indiana districts plan to send educators to Indianapolis with teachers, parents, principals, superintendents and school board members planning car pools, bus trips and more to provide a Region voice of support.

What do educators want?

Teacher compensation is most frequently echoed across the state as reason to rally.

“It’s never a good time to close schools down,” said Dunham, who is also president of AFT-Indiana, “But, how much can you take?”

With average teacher compensation in Indiana falling behind that of its neighboring states, a statewide teacher shortage has left school administrators struggling to find qualified, licensed educators, filling some essential positions with instructors teaching on emergency permits.

Others, unable to secure community support through referendum-funded tax increases, find it difficult to both attract and retain qualified teachers.

“Class sizes have ballooned because we don’t have the staff — we can’t fill the positions that are open and we can’t find the money to hire staff,” said Daniel Brugioni, president of the Lake Ridge Federation of Teachers. “When you start getting to that point when you’re looking at almost 100% of districts in the state can’t fill their openings, you realize something has to be done.”

But 2020 is not a budget year for the state assembly, meaning money allocated to public education funds over the next two years in the last legislative session is unlikely to change.

So some are turning to issues of school accountability and fixes to the state’s changing method of standardized testing — both of which are expected to be addressed early in the coming session.

Heightened concern for a lack of adequate public education funding has been brewing for years, dating back to a decision by then-Gov. Mitch Daniels’ administration to cut $300 million from the state’s education budget.

Those cuts have never fully been replaced in state funding. With an increase in charter and voucher programs through the state, public educators say they feel the burden of sharing state education funds with an increasing number of choice scholarship schools.

But, many educators say continued changes in teacher’s professional growth requirements and the first implementation of the state’s new ILEARN standardized exam, which saw a majority of Indiana students test below proficiency, has established a tipping point.

And, though it’s not a budget year, some teachers, like Hebron High School’s Erin Charpentier, say the hope the Tuesday rally sparks early conversations about funding issues among lawmakers — many of whom are up for re-election next year.

If you plan to go

Plan to leave early Tuesday — or even Monday night.

Press conferences, rallies and speeches from public education advocates are expected throughout the day in the Indiana Statehouse South Atrium.

ISTA has published a tentative schedule of events for the day with arrivals expected at 8:30 a.m. EST and a march through the Statehouse grounds at 10:50 a.m. EST.

Follow along with Times reporters Carley Lanich, @CarleyLanich, and Kale Wilk, @KaleWilk, who will be sharing stories from the Statehouse via live tweets and updates to nwi.com. 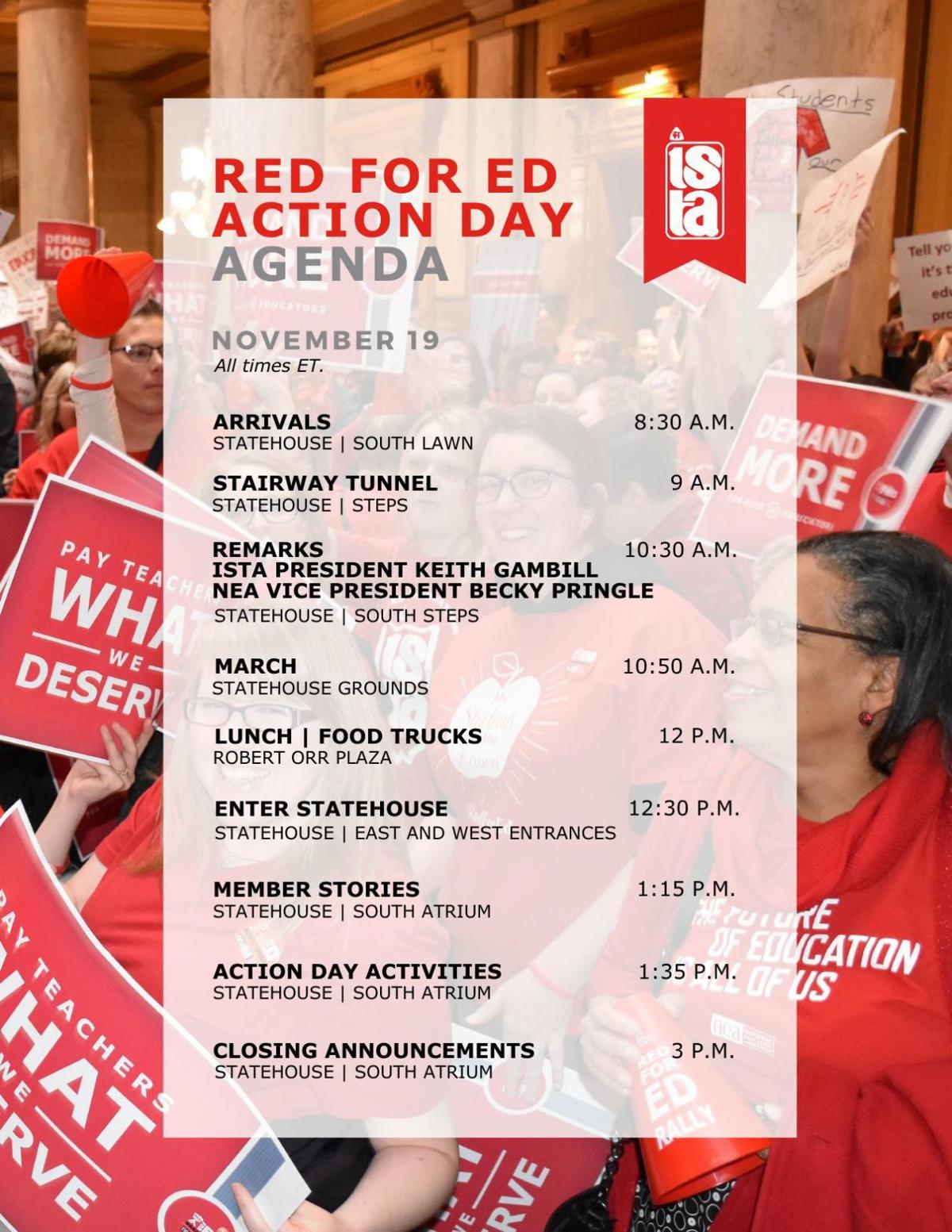 EDITORIAL: Canceling class isn't the best way for teachers to be heard

GARY — Gary Community School Corp. teachers will see their first stipend in years ahead of the winter holidays.

'A movement toward something bigger': Thousands of educators march for public education in wake of Indiana budget vote

UPDATE: Indiana students test low on new standardized exams: Here's a look at data and what it means for future of education in state

Fewer than half of Indiana students tested proficient in the state's new model of standardized testing.

Follow our live coverage from #RedForEd Day of Action here

'Enough is enough': Teachers rally in Indianapolis for Red for Ed Day of Action

The latest on the Red for Ed Day of Action Indianapolis.

A Northwest Indiana school district has been ordered to repay $751,907.53 in student tuition support state auditors claim was used to educate children school officials knew were residents of Illinois.