'This is a disgrace': Indiana State Board of Education visits Gary, deliberates progress of state takeover
Share this
× 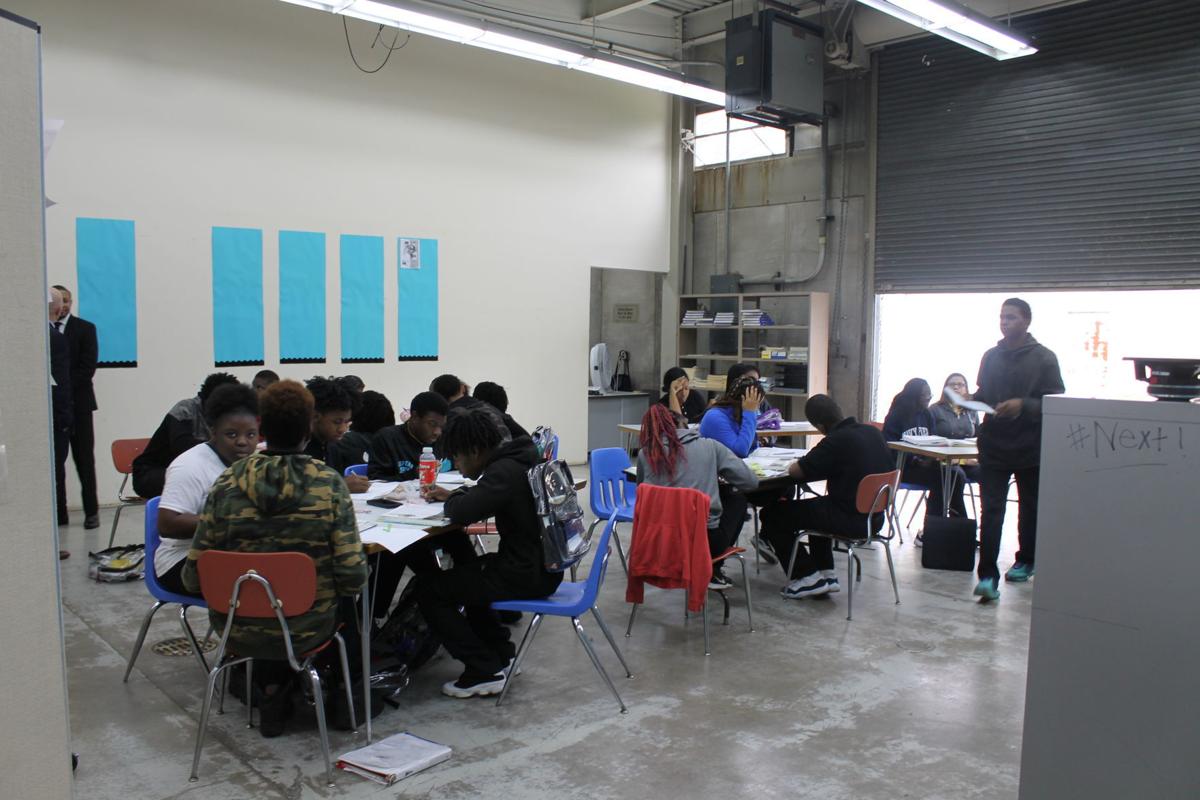 Indiana State Board of Education members visit a Theodore Roosevelt College and Career Academy class Wednesday temporarily being taught in a garage space at the Gary Area Career Center. 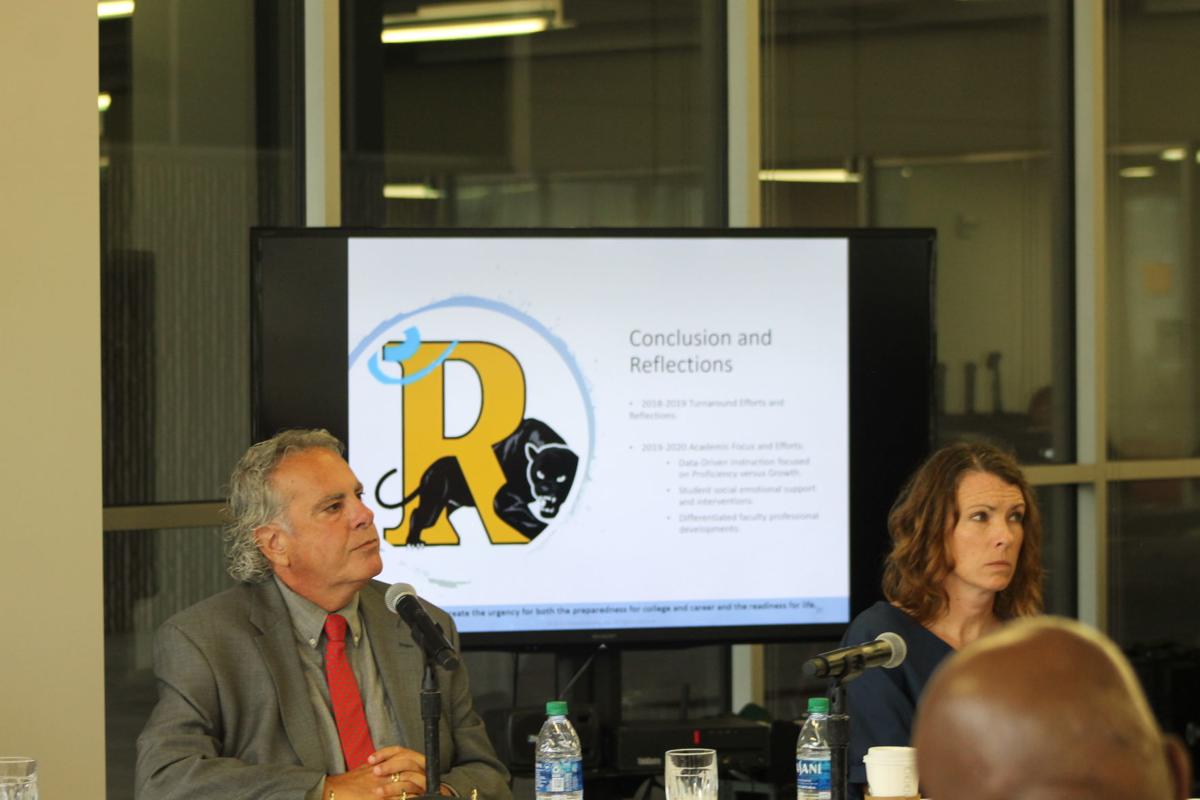 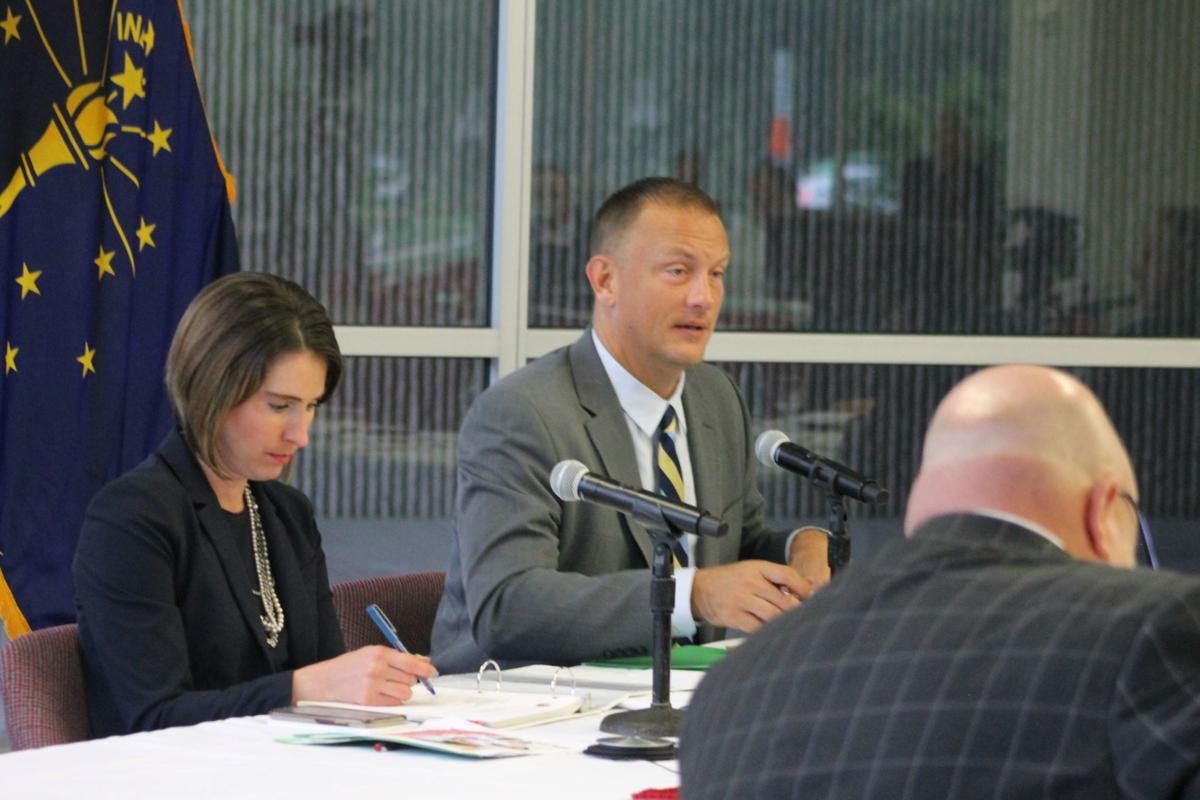 Indiana Board of Education President B.J. Watts speaks at a board meeting Wednesday morning at Indiana University Northwest in Gary.

GARY — A rare visit by the Indiana State Board of Education brought a renewed sense of urgency to addressing the learning environment of Theodore Roosevelt College and Career Academy students, displaced from the historic Gary Roosevelt High School building last year.

While the state board visited Indiana University Northwest on Wednesday for its regular monthly board meeting, Board Secretary Tony Walker took a tour of Gary schools a day ahead of the meeting.

What he found, Walker said, made him wonder if state intervention in the cash-strapped Gary Community School Corp. was working.

Walker reported back to the board photos and concerns of the management of the schools he visited — one being West Side Leadership Academy, where he said he observed mold and leaking ceilings, particularly in the high school library.

“The state has taken over Gary Community School Corp. two years ago,” Walker said. “There’s just no excuse that these students are still subject to conditions where they can’t go to the library, they can’t sit in classes without having leaks all over that building. If we’re going to get involved, we have to make it better.”

Along with his tour of several Gary schools, Walker visited the Gary Area Career Center, where Roosevelt students have met since last February’s polar vortex brought classes in the West 25th Avenue building to a grinding halt.

Roosevelt Principal Joshua Batchelor and Superintendent Marshall Emerson were slated to give an update of academic performance at the school currently managed by for-profit educational services provider EdisonLearning.

EdisonLearning was initially brought in to provide educational services after the state took over the school in 2012 following years of academic failure within the Gary Community School Corp. The state maintained EdisonLearning’s services through a 2017 innovation network agreement.

“It was an extraordinary school year,” said Emerson, who joined the school as superintendent last year. “We’ve got plans in place to really turn around the program this school year.”

However, several minutes into the EdisonLearning presentation, Walker interjected that he couldn’t focus on academics following what he had seen in his Tuesday visit; students learning in makeshift classrooms formed in Gary Area Career Center garage space he said he was told had no temperature control.

“That’s not fair to those kids,” Walker said. “This is a disgrace, actually, that we took over that school and it’s landed to where it is now that kids go to school in a garage.”

David Freitas, a member of the state board, expressed concern and asked what actions the board could take to remedy the situation.

Those steps could range anywhere from bringing the school back under Gary Community School Corp. purview or closing Roosevelt altogether, according to board staff.

A staff recommendation for action on the school could come as soon as the board's next meeting.

Following the meeting, board members made an impromptu visit to the Gary Area Career Center, visiting several Roosevelt English, math and science classes.

With a reduction in teaching staff and recent declines in enrollment, instructors there are now teaching combined math and science, and English and social studies classes at some grade levels, Batchelor said. Classes meet in a combination of classrooms and converted garage space.

This school year, EdisonLearning employs about 25 teachers for a total of 415 students in grades seven through 12, the principal said.

EdisonLearning officials say their goal is still to return to the former Roosevelt school.

EdisonLearning — along with the Gary Community School Corp., which oversees facility operations for the Roosevelt school — presented the state of Gary schools facilities costs to the public last July.

A video walkthrough of the building at that time shows extensive repair needed to flood-stained halls, debris-ridden classroom and burst pipes — the result of multiple cold snaps and a fire caused by faulty wiring in the 90-year-old building.

Since that July meeting, said Eric Parish of Gary schools’ emergency management team, the district is considering opening a request for proposals to assess the necessary clean-up needed to address mold, asbestos and damage within the school.

One estimate presented in the July meeting forecast more than $10 million would be needed to cover the work needed to renovate the school.

Parish said Roosevelt students learning in the Area Career Center would not be affected by coming weather this winter. He said students were placed in the building comfortably last year and would continue to be this year as well.

Only one combined classroom space is in a garage area, he said, which was driven by increasing enrollment in Gary Area Career Center classes.

After his visit to the career center, State Board of Education President B.J. Watts said he believes options for how to move forward at Roosevelt should still be considered at the board’s next meeting.

The State Board of Education meets next at 9 a.m. Nov. 6 at the Indianapolis Government Center.

The Gary Community School Corp. expects its enrollment has decreased by more than 169 students since last school year, according to projection…

Emergency managers for the Gary Community School Corp. recommended closing the historic Gary Roosevelt building earlier this month. Now, the team will bring its recommendation to the community in a public forum.

Indiana State Board of Education members visit a Theodore Roosevelt College and Career Academy class Wednesday temporarily being taught in a garage space at the Gary Area Career Center.

Indiana Board of Education President B.J. Watts speaks at a board meeting Wednesday morning at Indiana University Northwest in Gary.