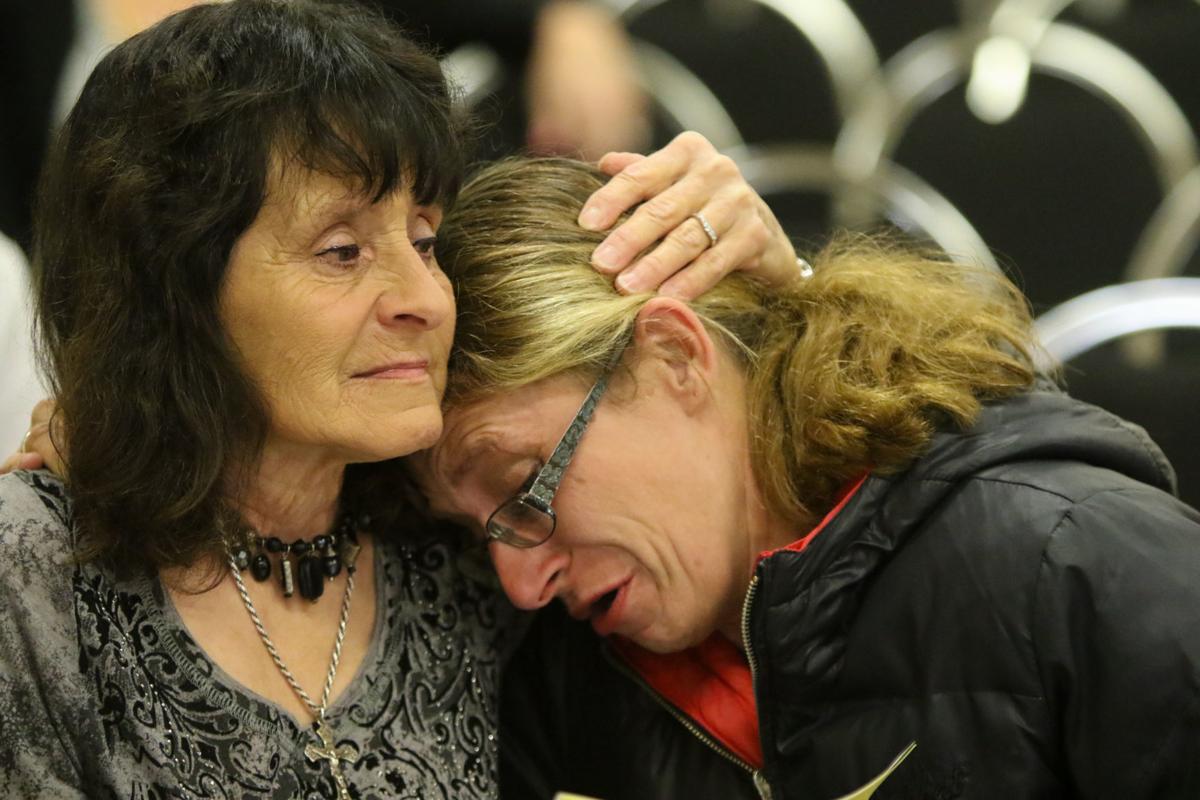 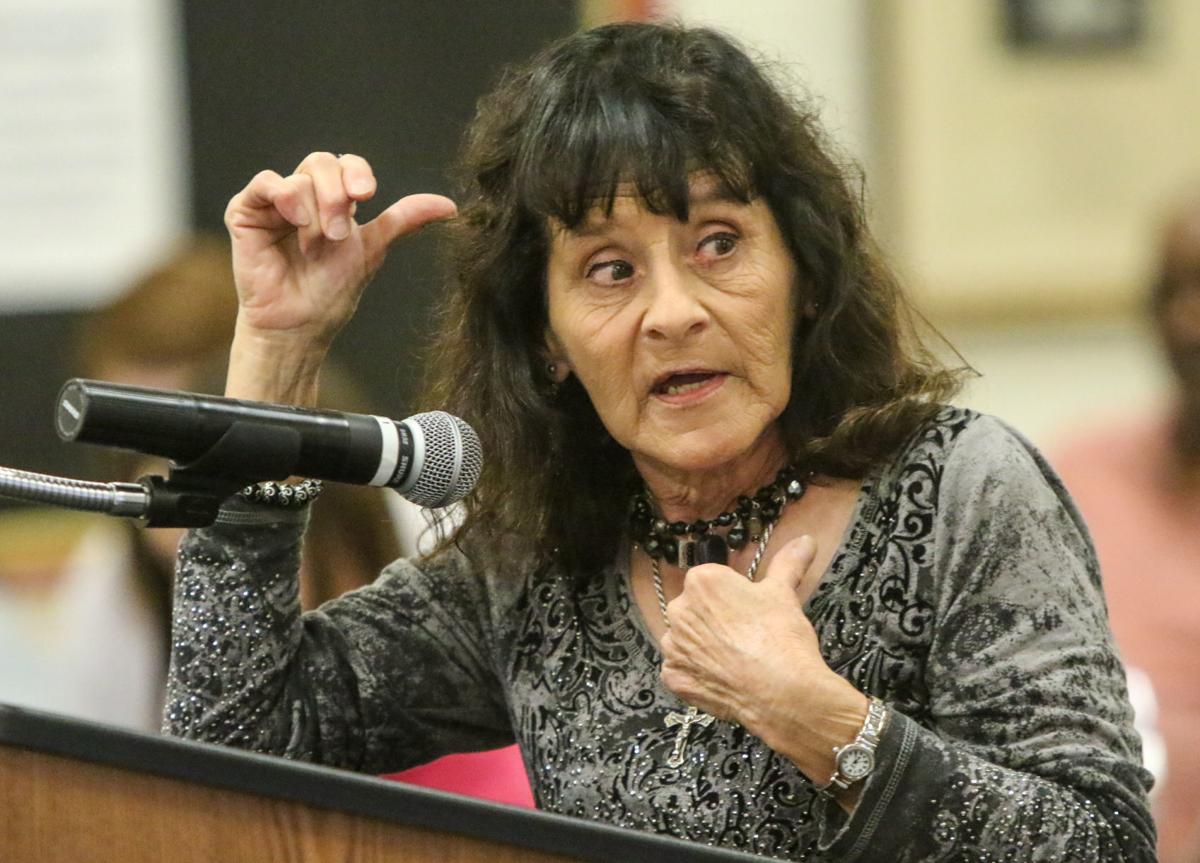 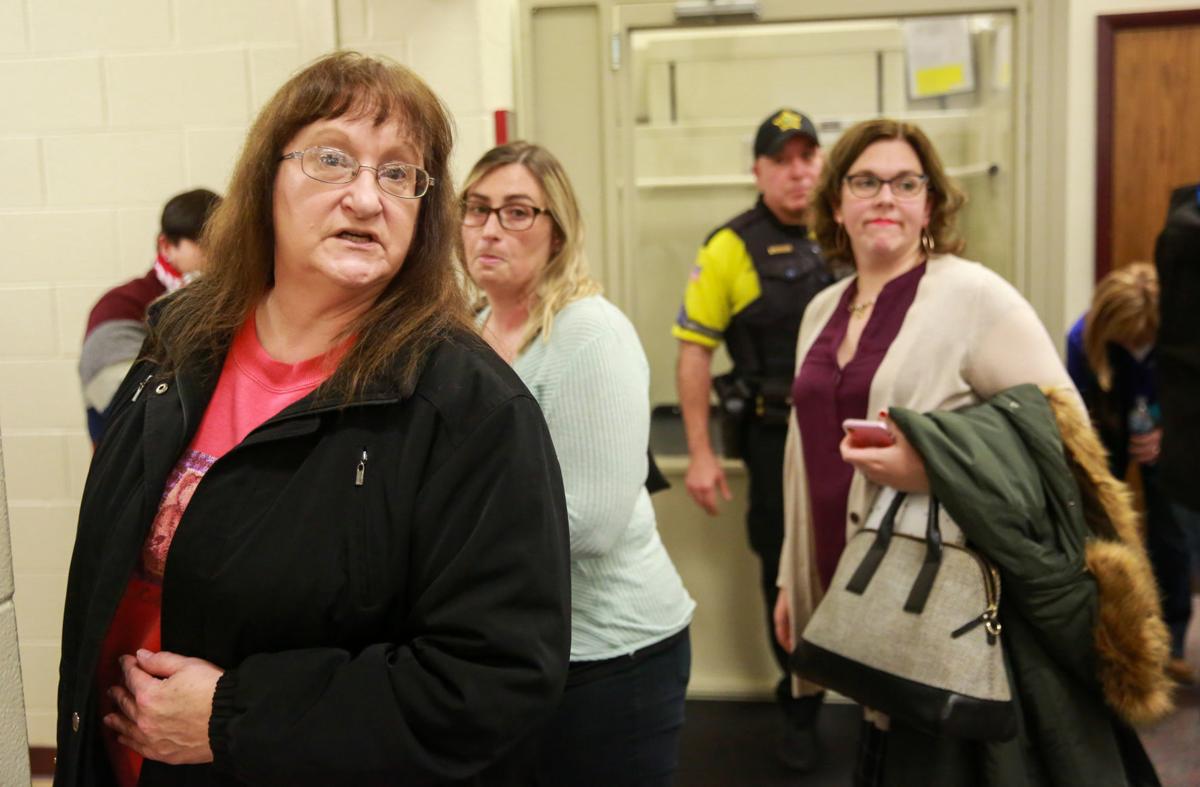 Angry Hammond residents leave the Hammond school board meeting Wednesday after the board voted in favor of school closings. 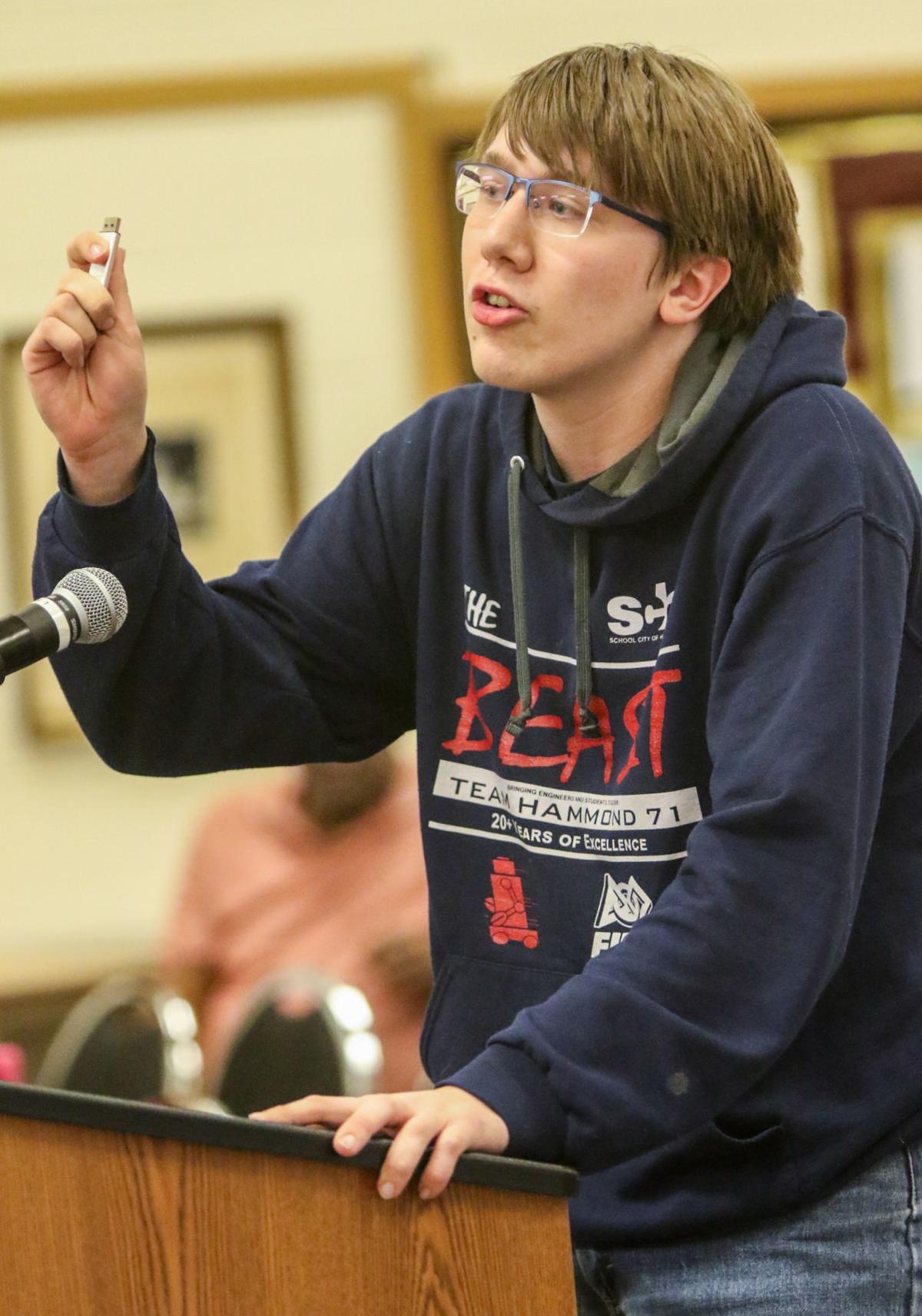 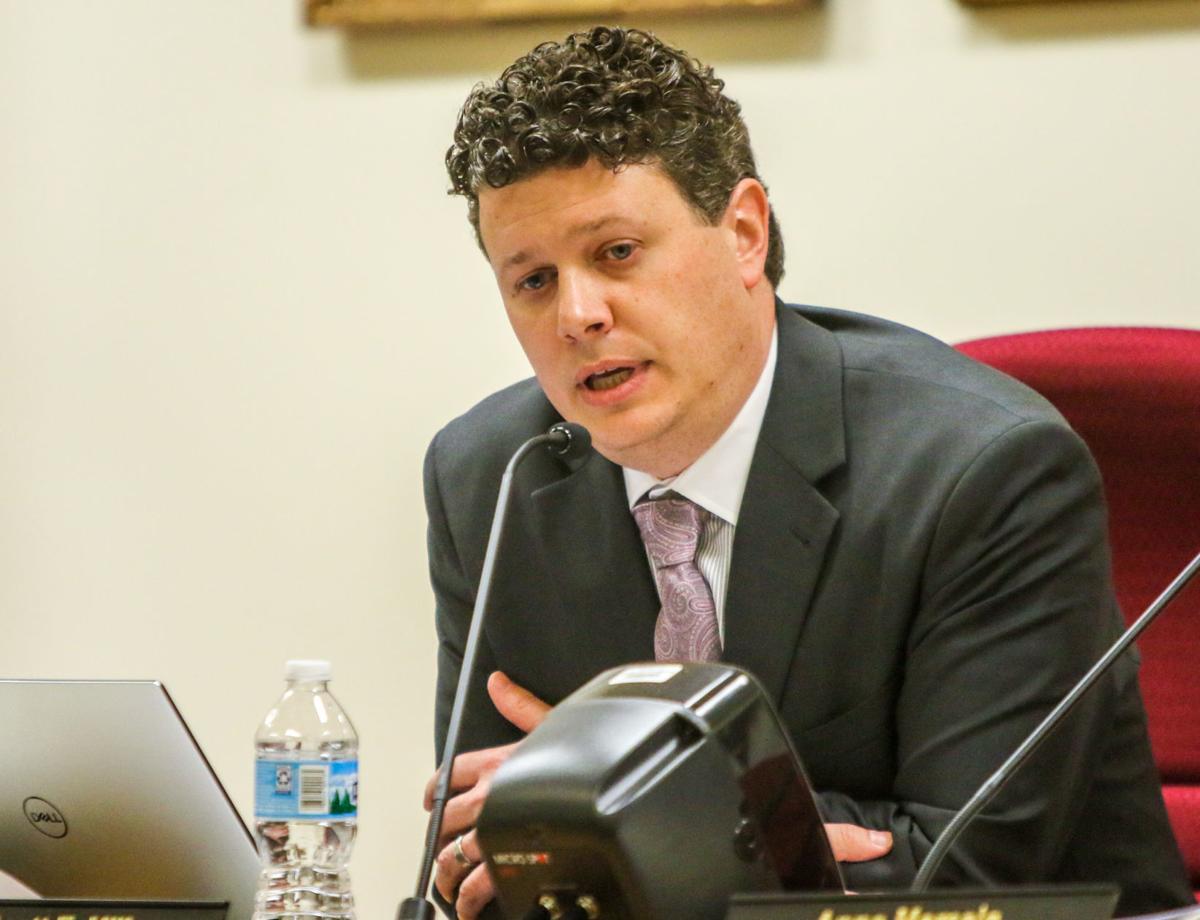 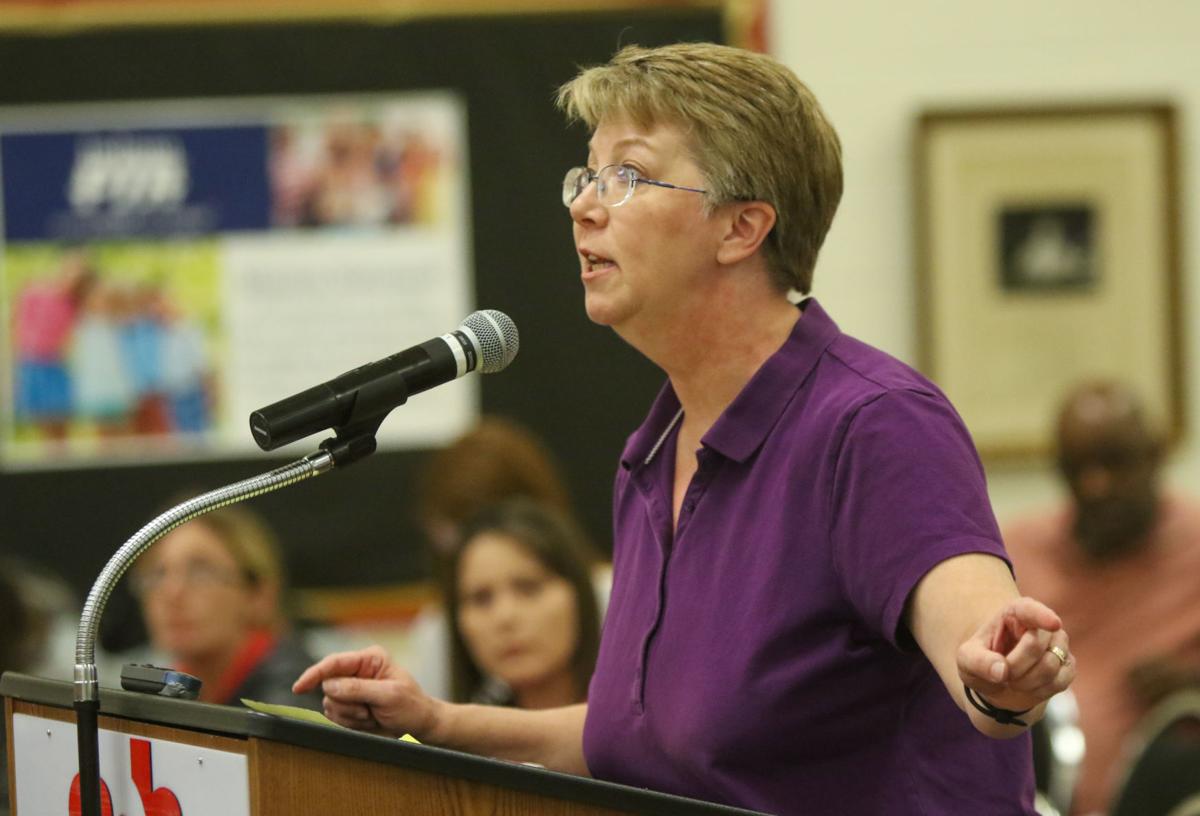 Substitute teacher Jan Kopischke makes her views known on the proposed school closings at the Hammond school board meeting Wednesday. 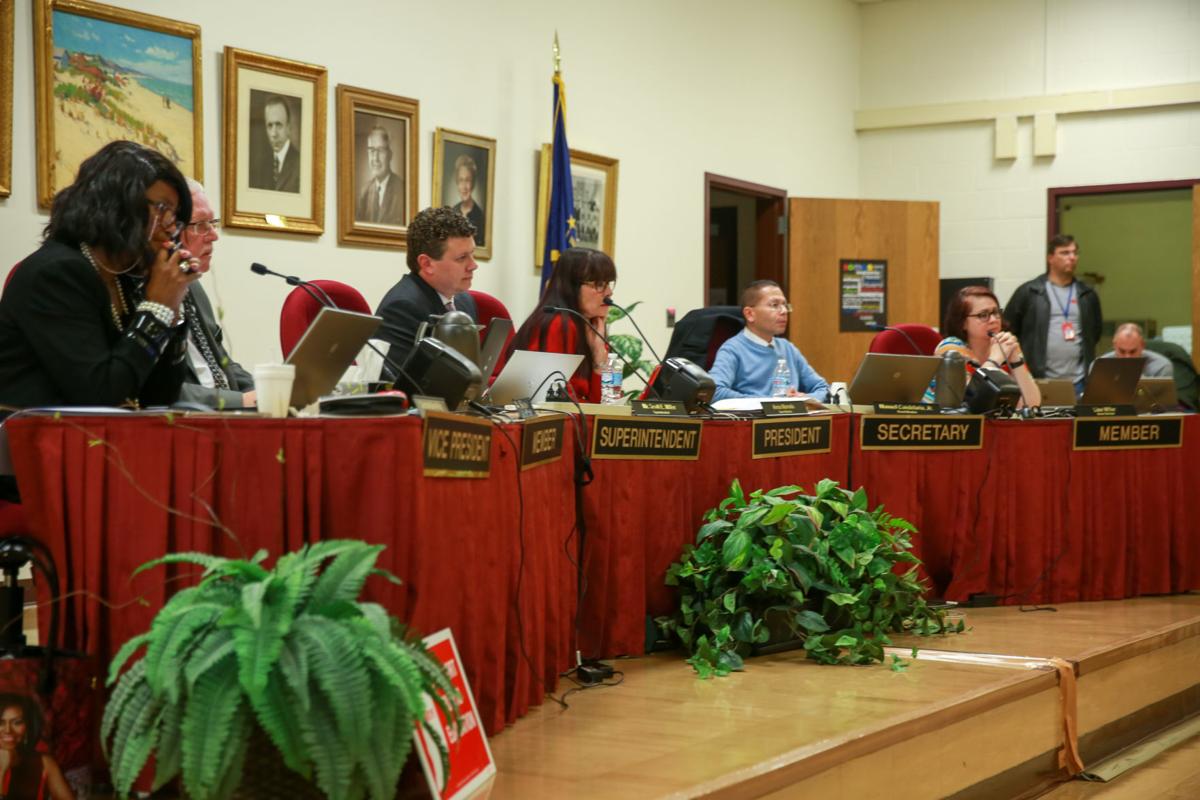 HAMMOND — Clark and Gavit middle/high schools will close with the start of the 2021-22 school year.

The School City of Hammond Board of Trustees sealed the fates of the two schools in a unanimous vote Wednesday night, warning of financial distress in Northwest Indiana's largest school district.

"We are in dire straits," Board Vice President Carlotta Blake-King said, before the vote which triggered cries of "Shame on you!" and "You lied to us!" from dozens of Hammond residents who stormed out of the meeting.

"It's just not fair," said Joanne Dybel, a third-generation alumna of the school city. "I don't think they're taking the kids into consideration."

Before the trustees' largely unpopular vote, Superintendent Scott Miller detailed for the first time a meeting with the state's Distressed Unit Appeals Board triggered by district finances in the 2017-18 school year.

He said district leaders were asked to prepare a plan for financial solvency to avoid a state takeover — similar to what has been seen in the Gary Community School Corp. and Muncie Community Schools.

"I want to avoid state takeover, I do not want to become run by private companies," Miller said Wednesday. "You can look in Gary and in Muncie, you can look at results of those decisions ... I earnestly desire, as superintendent, to avoid that at all costs."

Miller first recommended the closures — shuttering two of the district's four high schools and moving sixth-grade students back into the school city's 12 elementary buildings — in a special school board meeting last week.

The approved consolidation will require complete redistricting, provide transportation for all relocated students and allows the school city to move forward in branding a new, unnamed school being built behind the current Hammond High School.

Miller's consolidation plan looks to reduce nearly $36 million in operational and capital spending over the next five years in the school city, which was warned in the spring of a looming $10.2 million deficit to be reached in 2020 if no operational changes were made.

In the eight days since Miller announced his recommendations, some Hammond families have spoken out against a plan they say is being decided too quickly and against the messaging of a November 2017 referendum funding construction of the new Hammond school.

Hammond residents say they were told false promises two years ago that schools would not close if taxpayers supported the referendum.

"Once again, we're being told information after the fact," Hammond parent Joan Culver said, referencing news of district leaders' meeting with the appeals board. "We have been given this proposal in eight days with new information coming out every day."

The school district began making reductions over the summer — cutting dozens of staff positions and closing its Columbia, Lafayette and Miller schools. So far, those changes have resulted in more than $6 million in operational savings.

But, the district is still on a path to lose $2 million in both 2021 and 2022 if school leaders make no additional operation changes, financial consultant Matt Ruess said Wednesday night.

The school city has operated under the same four high school configuration for the last 50 years despite a decline of more than 11,000 students in that time, according to enrollment numbers presented by the superintendent last week.

Under Miller's plan, about 1,850 students will be placed in each of the district's remaining schools — Morton High School, and the new school, slated to open at the beginning of the 2021-22 school year. Between 900 and 950 students will be served in the school city's remaining Eggers and Scott middle schools.

In community meetings leading up to the Wednesday vote, Clark and Gavit parents specifically expressed concern for school safety and the disruption they say consolidation will bring in uprooting students from their neighborhood schools.

Three of the school board's trustees were elected after the November 2017 referendum. Trustee John Czulno was interviewed and selected to join the board Saturday, after former board president Deborah White resigned at the start of the month. Miller stepped into his role as superintendent in April.

"This was a hard decision to make — it's not necessarily the fault of the people on the stage or the people working behind the scenes," Slazyk said in tears. "I can't blame this board ... but everybody's suffering."

The Wednesday night board vote comes a day after the school city closed in an eLearning day, allowing Hammond teachers to join the more than 15,000 public education advocates who rallied in support of greater school funding in a dedicated Red For Ed Day of Action.

HAMMOND — Just days after its superintendent's recommendation to consolidate high schools, the School City of Hammond Board of Trustees has na…

'Enough is enough': Teachers rally in Indianapolis for Red for Ed Day of Action

The latest on the Red for Ed Day of Action Indianapolis.

"It's a risk all schools face."

Many of Gary's school buildings have been hit by arson over the years or served as dwellings for squatters and gangs.

The two school districts filed a lawsuit this month claiming the state law constitutes an unjust seizure of land that will deprive the districts of economic use of their property.

Superintendent Scott Miller said principals are being reassigned now to give them enough time to oversee the transition to new schools as part of the district's consolidation plan.

Angry Hammond residents leave the Hammond school board meeting Wednesday after the board voted in favor of school closings.

Substitute teacher Jan Kopischke makes her views known on the proposed school closings at the Hammond school board meeting Wednesday.