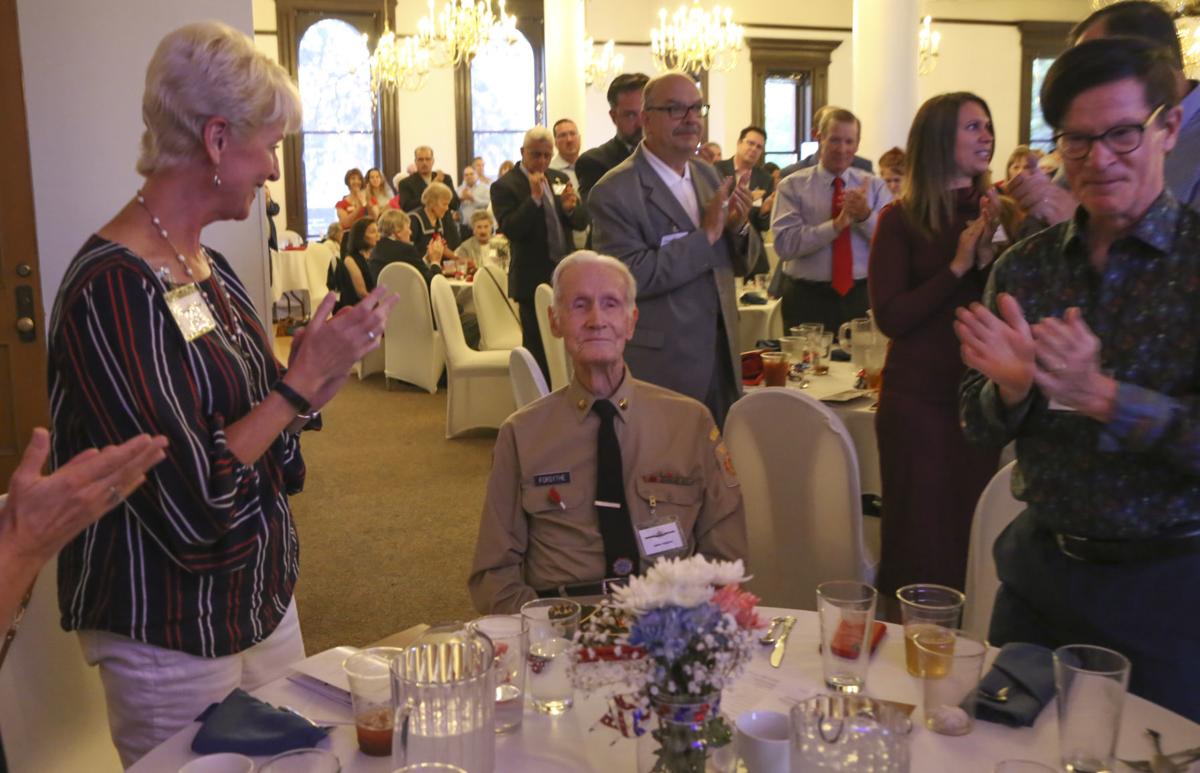 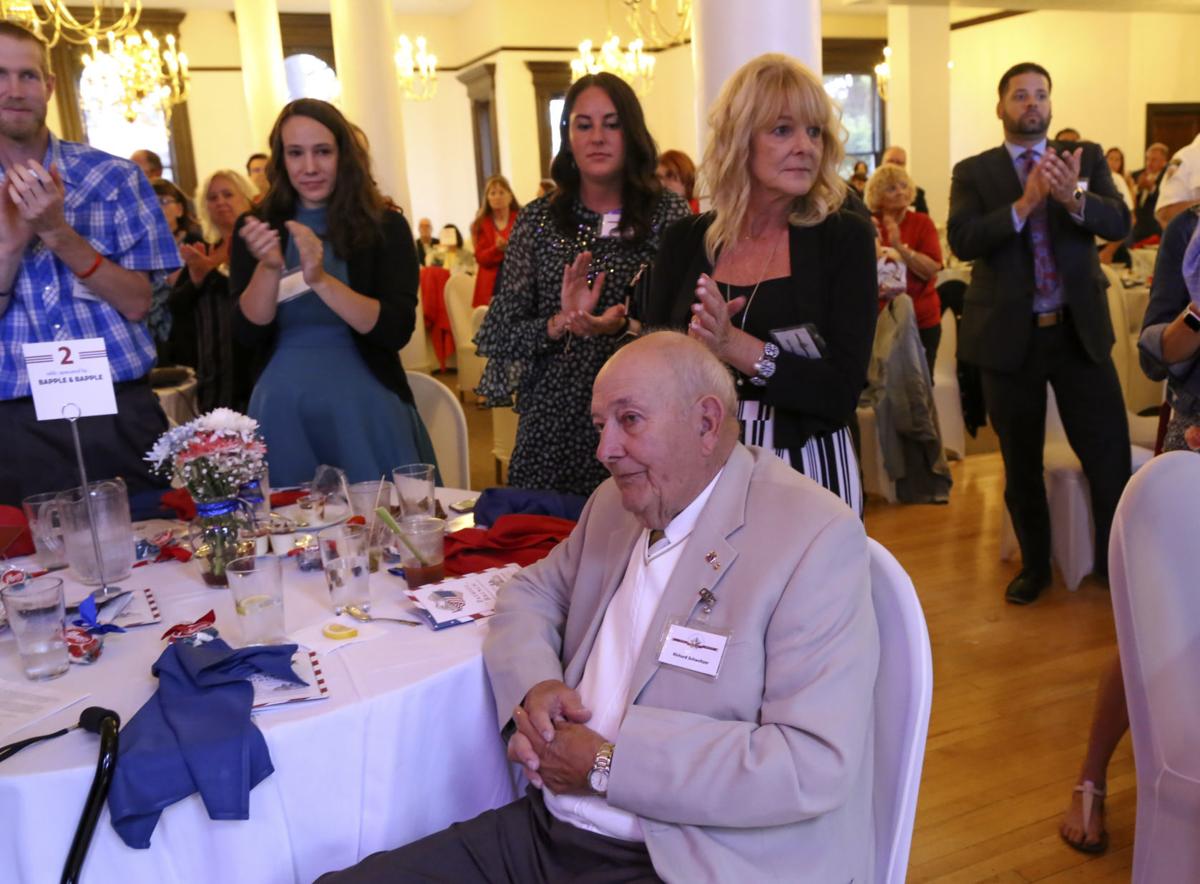 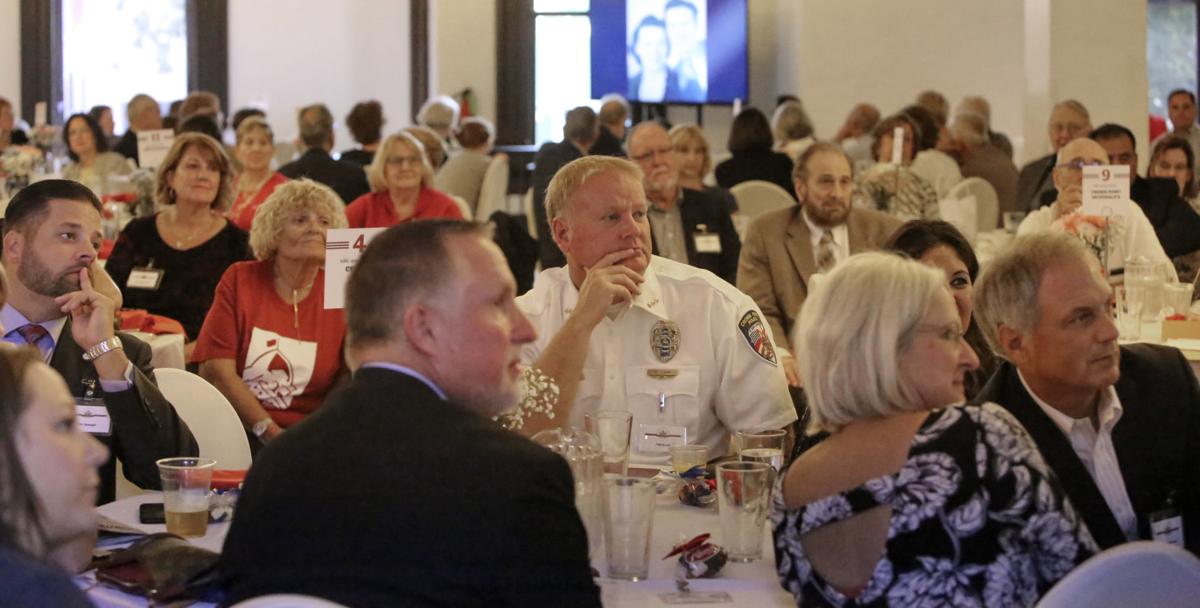 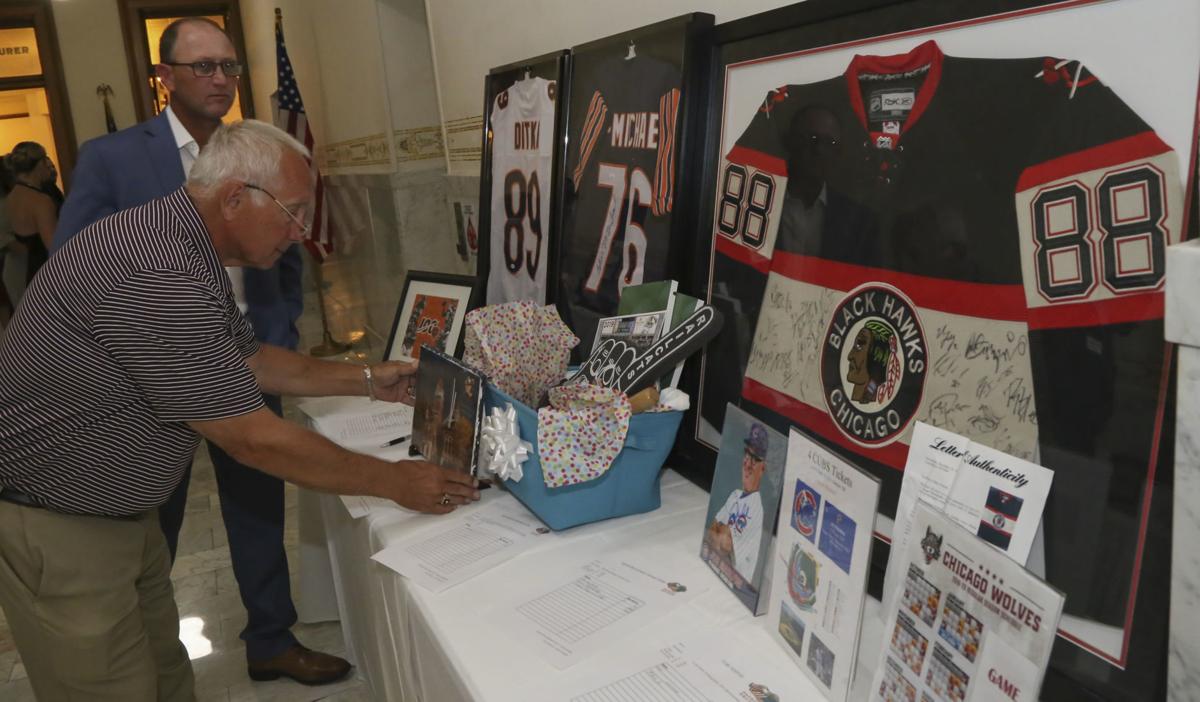 People look over sports memorabilia offered in a silent auction during the Annual Patriot Brunch Sunday in the Old Lake County Courthouse. 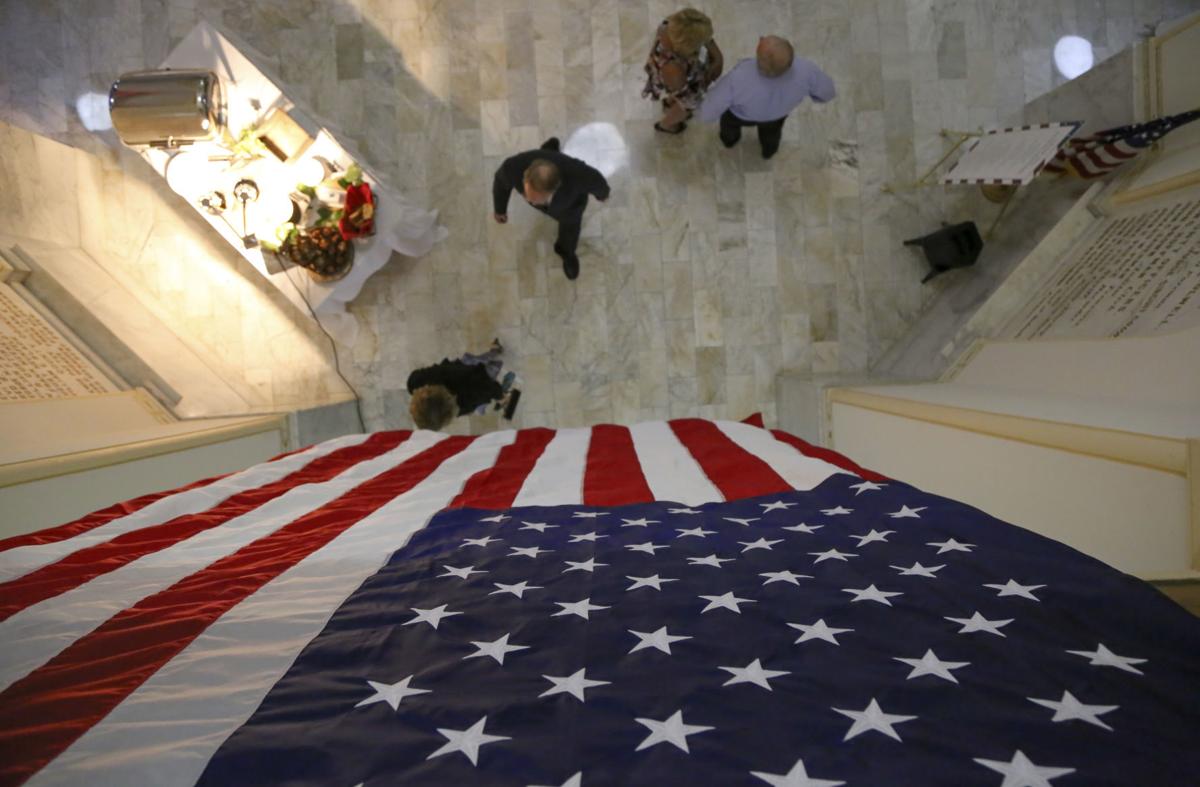 CROWN POINT — One served his country in two wars, then returned home to become a city councilman and later a two-term mayor. The other built a local business but never forgot his hometown, serving those in need, including victims of national catastrophes.

In a tradition that started in 2014, the foundation honored former Mayor James Forsythe as its Military Patriot of the Year and local businessman and philanthropist Richard Schweitzer as Civilian of the Year.

Dressed in a military uniform, Forsythe praised the efforts of the foundation to continue restoration of the downtown courthouse built in 1879. The Sunday brunch, held in the courthouse ballroom, raised funds for the foundation, currently engaged in its largest project.

The foundation is spending $250,000 for a restoration-stabilization project for the building’s attic, said Managing Director Carrie Napoleon.

Relating his background in saving the courthouse, Forsythe noted, “I can’t imagine what it would look like if you drove through here and saw a big parking lot.”

The foundation, Forsythe said, “made this a very valuable piece of property. … It’s been fun working with the Court House Foundation.”

Forsythe, 94, was a 19-year-old high school senior when he joined the Army during World War II, serving as a medical technician. Leaving the service after the war, he returned to duty as an Army Reservist during the Korean War.

In peacetime, Forsythe joined the Crown Point City Council, later serving as mayor from 1984 to 1991. Among his accomplishments as mayor were construction of an emergency services building that bears his name; an expansion of Main Street to five lanes; and the development of the light industrial park on Summit Street.

Looking at an audience of nearly 200 people, Forsythe concluded, “It’s been a great day, and I thank you very much.”

Both honorees were featured in videos, in which Schweitzer, 87, credited his late wife, Josephine, for her commitment to helping others. The couple had been married 57 years when she died in 2014.

Noting the foundation honor, Schweitzer said in the video, “I’m not a person who likes to be patted on the back. I like to help others, but my wife was more involved than I was.”

Schweitzer built J&R Conoco into eight gas stations and Superior Petroleum into one of the largest fuel distributors nationally. Along the way, he served as a Crown Point volunteer firefighter and umpire for Little League and Babe Ruth Baseball.

Schweitzer has a saying: “If you have love, kindness, help others and have faith, it will be returned hundredfold.”

Schweitzer has lived that message through his continued support of St. Mary School and Church in Crown Point, the recent Southlake YMCA expansion project and additions to Franciscan Health hospital in Crown Point. He also has contributed to national disaster relief efforts.

Speaking for his grandfather, Jonathon Fitzgerald, one of Schweitzer’s eight grandchildren, announced the family has established a $25,000 matching grant in honor of Josephine Schweitzer that could result in $50,000 for the foundation.

“It only takes one person to make a difference,” Fitzgerald said.

Master of ceremonies Bruce Woods, a foundation trustee, thanked the audience for their continued support of the courthouse.

“This building is beautiful,” Woods said, “but beauty comes with a price.”

Napoleon thanked the city for the recent installation of handicap-accessible sidewalks around the courthouse. The attic project, she said, is the largest courthouse project since the foundation took over the building in 1974.

The goal, Napoleon said, is to “stabilize the building and make sure it’s sound for future generations.”

The arrows just keep pointing up for a marquee Region city, and strong leadership is behind the growth and transformation.

CROWN POINT — Just after a newborn left with her parents Thursday from Franciscan Health Crown Point, friends of Sylvia Richardson honored a w…

The World War I and II and Holocaust memorial has been years in the making. On Wednesday, people involved with the project started clearing the future site. Here's what they had to say.

People look over sports memorabilia offered in a silent auction during the Annual Patriot Brunch Sunday in the Old Lake County Courthouse.