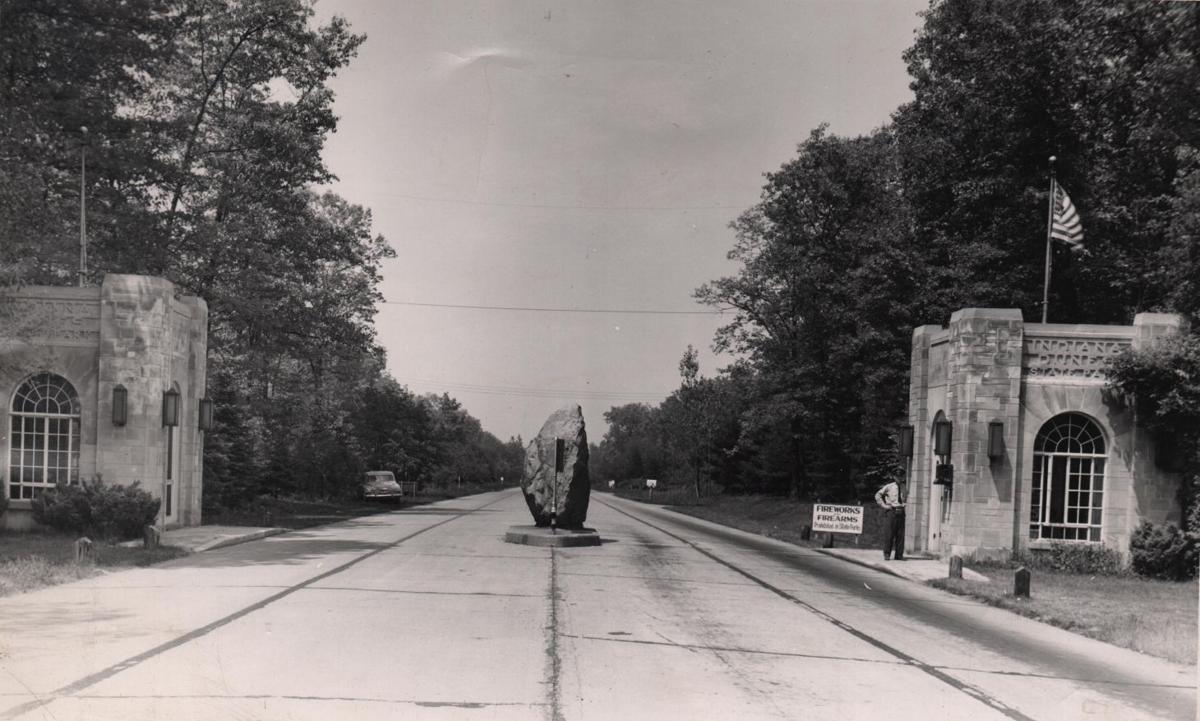 Entrance to the Indiana Dunes State Park, circa 1950s. 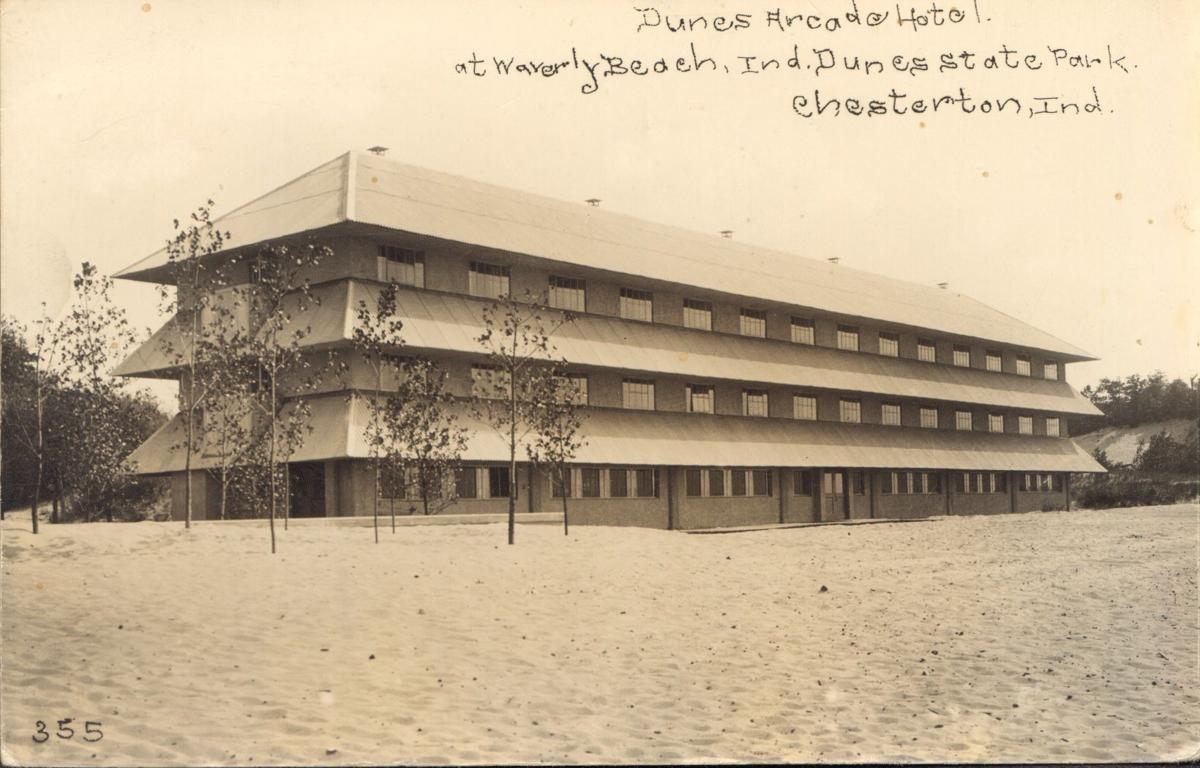 Dunes Arcade Hotel, one of two at the Indiana Dunes State Park, circa the 1930s.

The push to protect the Indiana Dunes began 117 years ago and the local lakefront is now home to many miles of state and federally protected nature areas.

But Save the Dunes Executive Director Nicole Barker does not believe the job is done.

"Some people ask me, 'Aren't the dunes already saved?' " she said. "The answer is no. With every generation the threats to the dunes change, and we pride ourselves on adapting to each new challenge and preparing the next generation to address them through their unique approach."

"Our future is sure to include a great deal of interaction with of course conservationists, but also businesses, industrial groups, planners, and residents alike," she said. "We want people to understand why the dunes need protection, and we want to engage in two-way conversations about how to best protect them. Success is defined by the number of people who care enough to speak up for the dunes."

Dr. Henry Chandler Cowles, a University of Chicago botanist, had an early understanding of the importance of the dunes and its unique ecosystem. The local dunes served as his outdoor laboratory and his work brought international attention to the dunes.

"We've learned a lot in the past 50-100 years but honestly we are still learning," said Paul Labovitz, superintendent of the Indiana Dunes National Lakeshore.

"Indiana Dunes National Lakeshore protects a pocket of well-preserved but somewhat threatened dune and inland habitats in the midst of some of the most developed industrial lands in the USA and what we've learned is that we can still protect these high valued places for public enjoyment and the industrial neighbors have become partners to help," he said.

Those industrial leaders were already beginning to show up along the local stretch of Lake Michigan by 1908. Yet around the same time, the Chicago-based Prairie Club in 1913 began camping at the dunes.

Stephen Mather — a Chicago industrialist and member of the Prairie Club who would become the first director of the National Park Service — in 1916 proposed a 12,000-acre Sand Dunes National Park.

World War I slowed industrial development and environmental activism in the dunes. After the war ended, the Indiana legislature approved the creation of Indiana Dunes State Park in 1923, it was signed into law in 1925 and was opened to the public in 1926.

Interest in protecting the dunes again began to pickup, but stalled with the stock market crash of 1929, the Great Depression that followed and World War II. The prosperity that followed the war would bring the push to make the dreams of Dr. Cowles and the Prairie Club a reality.

"An important lesson is that places that are important to us will be gone if we don't actively participate in the struggle to protect them," Barker said. "There is no playbook for how to protect nature, and it takes a diverse group of people and viewpoints to succeed."

In 1952, Dorothy Buell, a 65-year-old Ogden Dunes housewife, formed the Save the Dunes Council (which later became Save the Dunes) in her home. Buell went door-to-door in her neighborhood, requesting support in preserving the dunes as a national park.

Buell clashed with Indiana legislators, who backed economic development, when she asked for their protection against the development of a port in the dunes.

"The dunes are important locally, regionally, nationally and globally," Barker said looking back. "Our Indiana Dunes National Lakeshore is the 7th most biodiverse park in the entire National Park system. We see the same number of visitors as Yellowstone and Glacier National Parks."

"Having a highly biodiverse national park in the backyard of our communities and next to a huge urban area like Chicago is extremely rare," she said. "Our park is accessible not just to the wealthy, and it features some of the most amazing natural communities on the planet. It is exceptionally special. The dunes are a huge part of what draws people to live and stay here."

Labovitz said the dunes are the the local and regional connection to the wider National Park System.

"Indiana Dunes and now Pullman National Monument in Chicago are places in and of themselves that hold the stories and wonders that all National Parks deliver, just a lot closer to a whole lot of people," he said. "In our busy region, its nice to know that some of the best lakefront property is owned and accessible by everyone."

"The Dunes is also an important economic driver for the region and state," Labovitz said. "As the number one destination for millions each year, the return on public investment is important to keep in mind as incremental nibbles of negative impact are proposed."

Buell helped make all this possible when she sent a hand-written letter for Illinois Sen. Paul Douglas, D-Ill., asking him to advocate for the proposal in Washington. Douglas contacted the two senators from Indiana, saying he planned to introduce a bill backing the creation of a national park in their state.

The Indiana senators backed their counterparts at the state level, who advocated instead for the steel mills and a new port. Douglas introduced the bill anyway.

Douglas began pitching his proposal to President Kennedy shortly after he entered the White House. Kennedy assigned the Bureau of the Budget to examine financial plans for the port.

Herb Read, an early member of the Save the Dunes Council who lived within the dunes footprint, had technical experience and traveled often with fellow member Ed Osann to testify at hearings in Washington D.C.

Kennedy eventually said he was tired of the bickering between the pro-park and pro-port supporters, saying they had to compromise or neither would be approved.

The compromise came in mid-1963, when legislators agreed to both the port and park being created.

The National Lakeshore was officially dedicated in September 1971, with Secretary of the Interior Rogers C.B. Morton and presidential daughter Julie Nixon Eisenhower serving as keynote speakers. The event took place at the Indiana Dunes State Park.

"One of our most significant challenges is conveying the urgency of these somewhat technical, science-based issues to the community," she said. "It was much easier gathering folks to rally against tangible threats such as a proposed nuclear power plant. We must provide natural resource agencies with the tools and funding to control non-native plants that threaten to destroy our rare biodiversity."

"An opportunity in front of us is to truly engage as a community on how open spaces enhance our towns and municipalities on an aesthetic, recreational and also economic scale," Barker said. "Forecasts show that we will grow as a region - are we ready to develop smartly in a way that builds on our natural assets or will we approach development with a business-as-usual approach? It's time to innovate here to smartly interweave conservation with solid planning and development. We lose so much if we work at odds with one another."

Labovitz said he believes the dunes are faring pretty well, other than the pockets of beach erosion from the cyclic high water and weather.

"We are still wrestling with safe access issue at these beaches as well as devising strategies to address new hazards at Mt Baldy as well as opening more remote Lakeshore properties at places like the Heron Rookery and Pinhook Bog," he said.

Labovitz said efforts are also under way to provide recreational opportunities "where many will learn how to play outside again."

"As we get better at defining the role of the Dunes as more than just a protected ecosystem, rather as an integral part of the region's quality of life, important infrastructure, we will get better and better at articulating the value of all public lands and grow the support base of the public who will advocate for our continued existence and operation."

Chesterton: A small town with big sense of community

PORTER — The town is small in size compared to others around the county, but is pretty well known as a result of its location along the popula…

WESTVILLE — The early years of Westville are rooted in a story of a woman who relocated here to keep her children after her husband died.

LAKE STATION — It owes its existence to a railroad line, or more specifically a train station.

Burns Harbor: From settlers to steelmakers

BURNS HARBOR — Like much of the surrounding area, what is known today as the town of Burns Harbor was settled by Swedish and German immigrants.

Keeping environment healthy 'good for all of us'

VALPARAISO — Research helps inform park management decisions, but it's not the only factor, Paul Labovitz, superintendent of the Indiana Dunes…

More to Porter County than just the Dunes

VALPARAISO — About half of the 6.3 million people who visited Porter County a couple years ago headed straight to the local dunes, according t…

The Dunes' future includes calling it a park

Entrance to the Indiana Dunes State Park, circa 1950s. 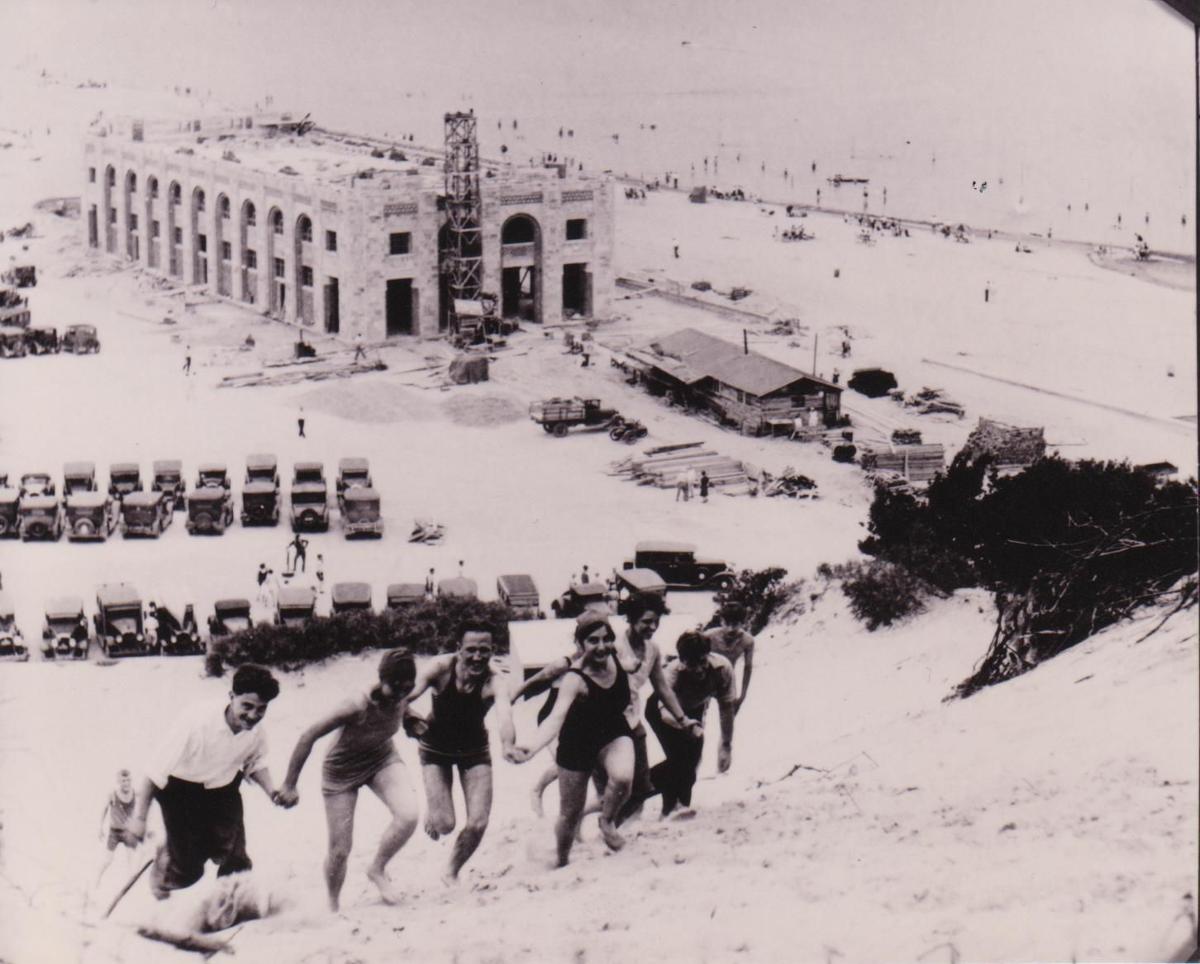 The pavilion at the Indiana Dunes State Park was constructed beginning in 1929. It opened in 1930. 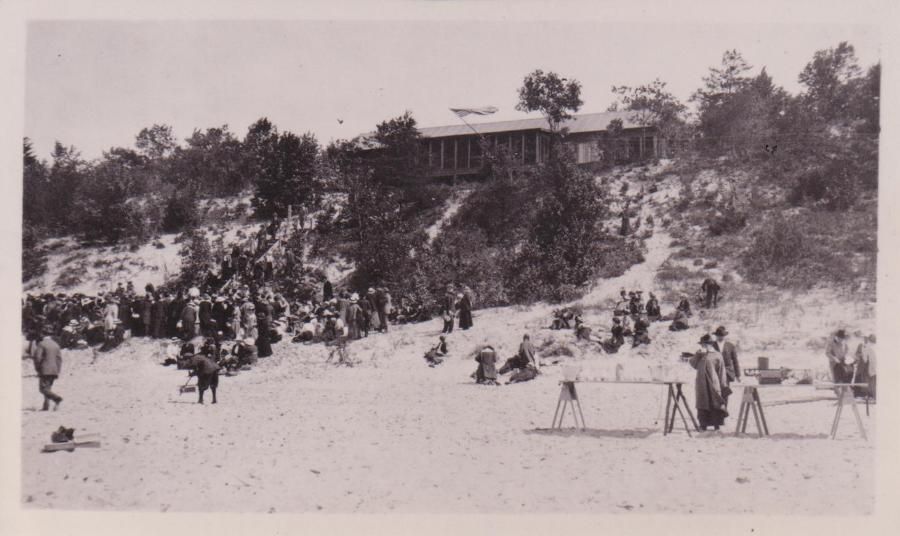 The Prairie Club built a beach house at what is now the Indiana Dunes State Park. The group was instrumental in the formation of both the state and national parks. They eventually sold this property to the state. Photo is circa 1920.

Dunes Arcade Hotel, one of two at the Indiana Dunes State Park, circa the 1930s. 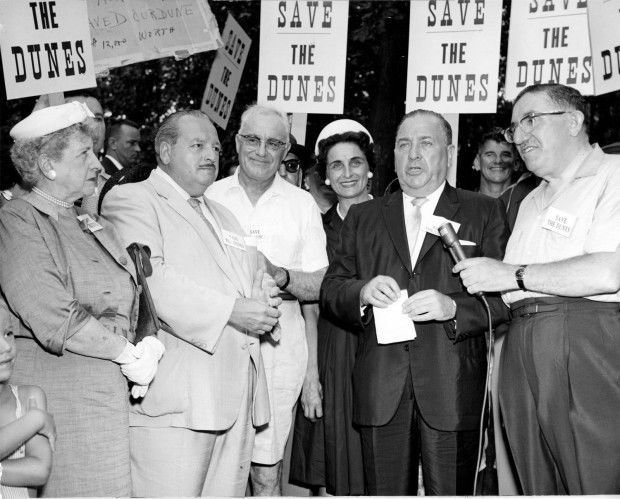 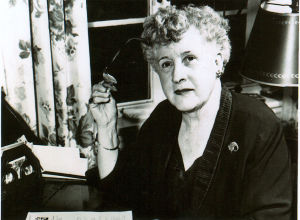 Dorothy Buell, founder of Save the Dunes