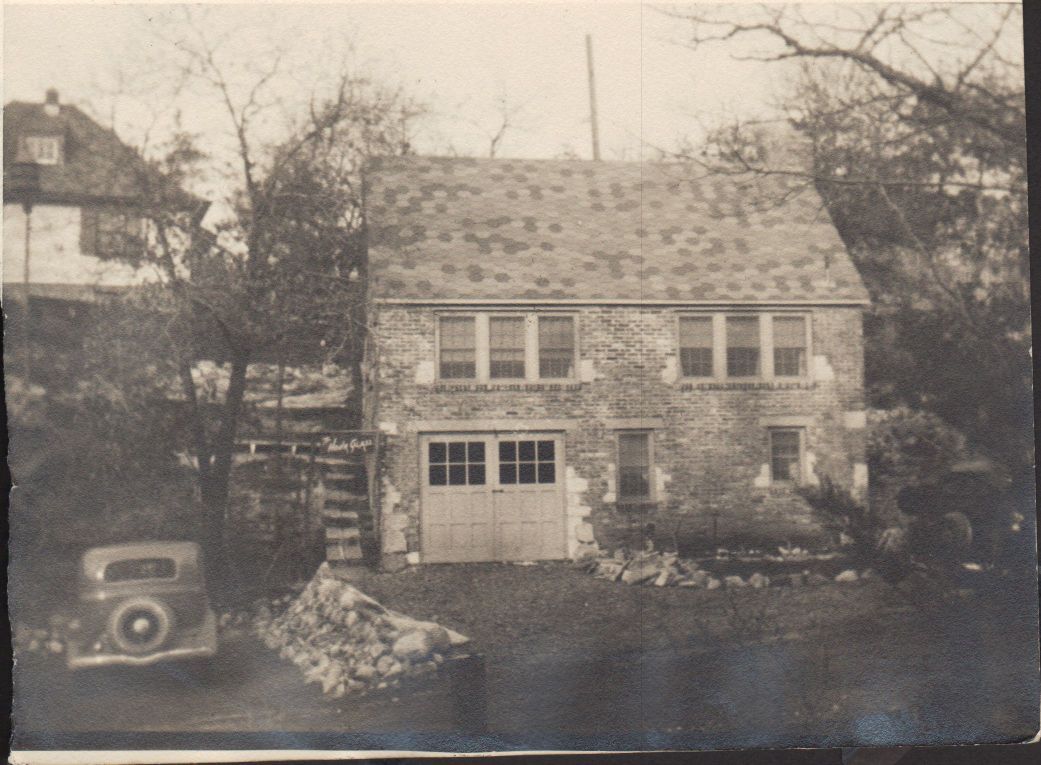 The Frank home was built in 1930. It was expanded in 1944 and is called the Hour Glass House. It serves as the home of the Ogden Dunes Historical Society. 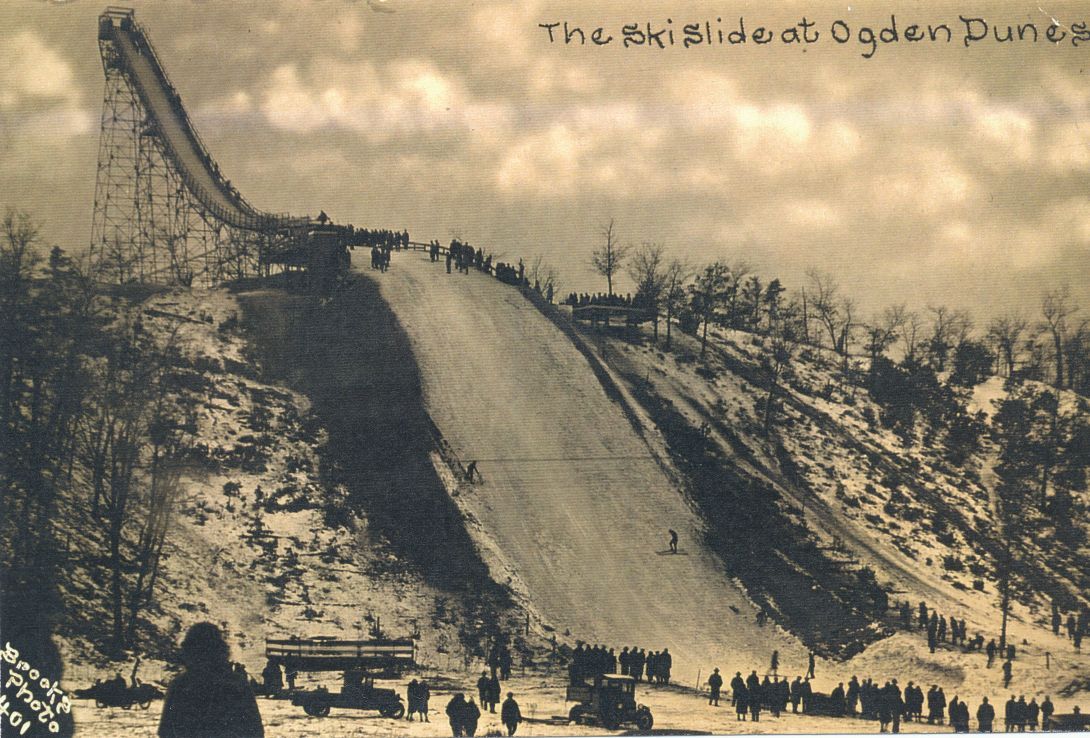 Ogden Dunes was the site of a ski hill built in the late 1920s. It held international competitions with as many as 10,000 in attendance before it was torn down in 1935. 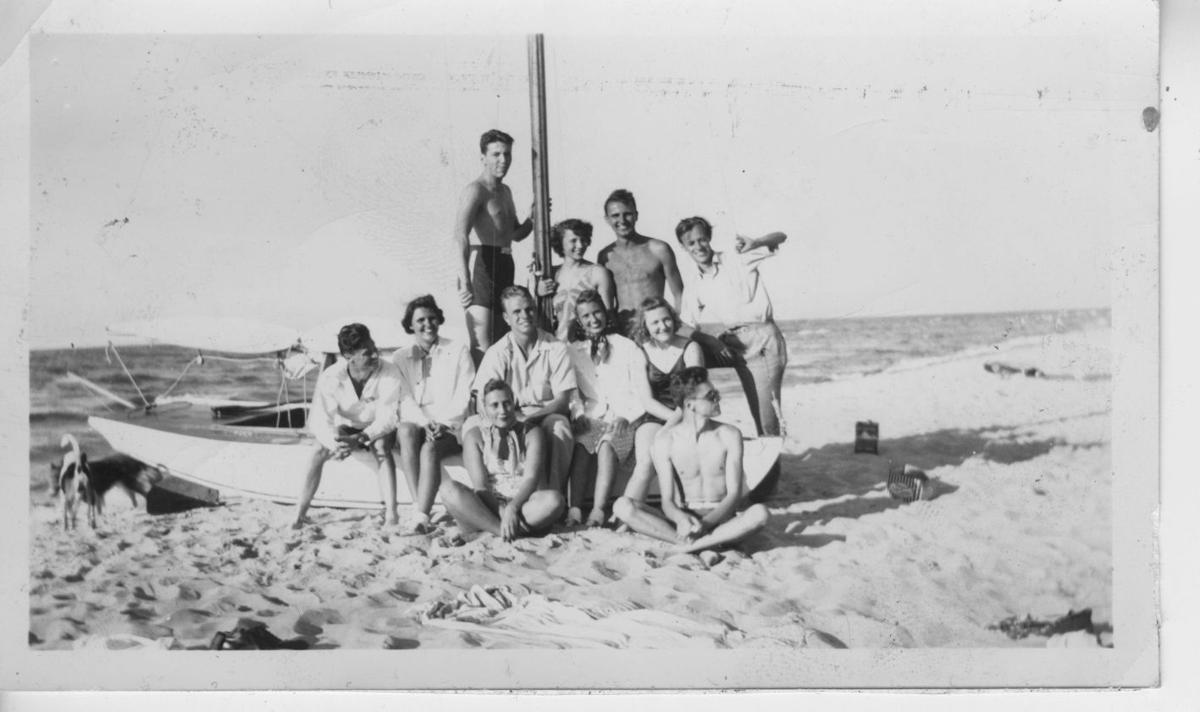 A photograph of "The Rafters," a group of young people at Ogden Dunes, taken on the beach in 1939. 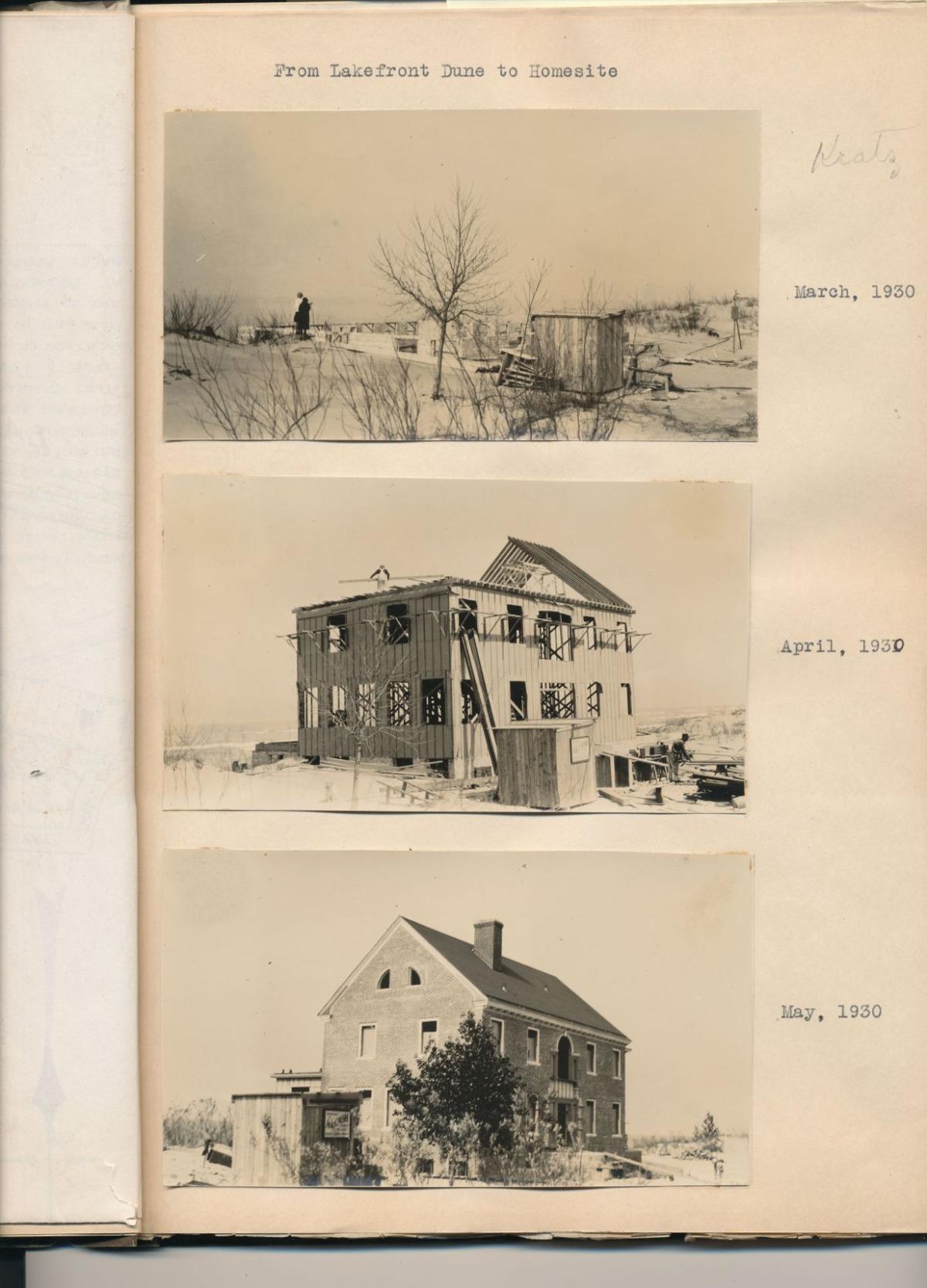 A page from a real estate sales binder shows the construction of a home in Ogden Dunes in 1930. 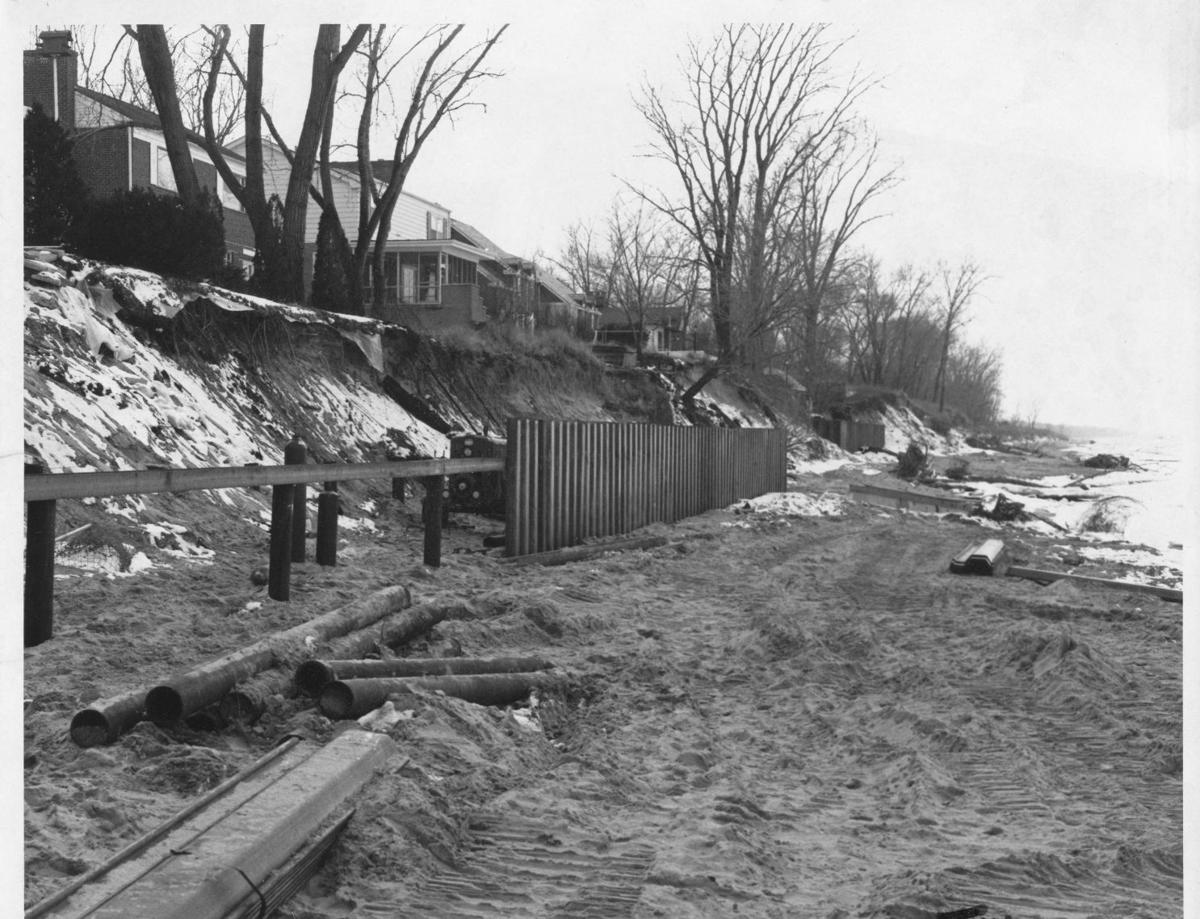 In the late 1980s and 1990s, Ogden Dunes underwent severe erosion problems, which prompted lakefront residents to build seawalls to protect their homes from Lake Michigan.

The city of Gary was born on the construction of U.S. Steel, a commuter railway brought thousands of visitors to the Region from Chicago and some of those Chicagoans, such as those who formed the Prairie Club and Diana of the Dunes, made their way to a patch of sand just east of Gary and west of the newly conceived Indiana Dunes State Park.

Likewise, two men, Colin Mackenzie and Samuel Reck, both Gary residents, saw the possibilities in developing an "upper-middle class, highly restricted community with a golf course, riding stables and boat club," according to a book written by Ogden Dunes historians Ken Martin and Dick Meister and published as part of Arcadia's Images of America series.

Reck built his home here and set up a real estate office. The two had purchased some 500 acres of land from the estate of Francis Ogden, a Wisconsin real estate developer.

The Town of Ogden Dunes was incorporated in 1925.

"By being 'restricted,' the community explicitly excluded racial minorities and Jews. With incorporation a few of the early investors built large homes near the Reck home while others built cottages," according to the authors.

"But the grandiose plans, as reflected in the 1927 sales brochure, did not get off the ground. By 1927 to stimulate interest, Ogden Dunes Realty leased and sold part of a large dune near the entrance to the Ogden Dunes Ski Club. This ski club, established by Norwegian-Americans in Chicago, began to build the highest man-make ski jump in North America in late 1927. The first international competition was held in 1928 with an estimated 10,000 in attendance," they wrote.

By 1930, there were 14 households and 50 individuals living year-round in Ogden Dunes. By 1935, in the midst of the Great Depression, the ski jump was dismantled and the land divided into lots.

Residential growth continued. By 1940, there were 44 households and 144 residents. Many full-time residents had their homes constructed by well-known architects such as Frank Lloyd Wright and the Keck brothers. The community was a mix of full-time residents and summer or weekend residents in their cottages.

Building slowed during World War II, but picked up again following the war. Summer cottages were town down or expanded into year-round homes.

By 1950, the full-time population had reached 600. In 1953, residents rallied together to build a community church near the town's entrance.

The town also became a seat of conservation. Home to Dorothy Buell, who in 1952 invited 22 women to her home for a meeting. Out of the meeting grew the Save the Dunes organization and a renewed effort to protect Lake Michigan's shoreline.

A homeowner's association was also created and several clubs and organizations, including the Lion's Club and Women's Club, were organized to bring residents together. The groups planned several events, including parades and picnics, that are still held today in the community.

The new decade saw the creation of the Indiana Dunes National Lakeshore, which resulted in some areas of the town being purchased by the National Park Service.

It also saw the development of the Port of Indiana by the State of Indiana directly to the east. The port, while providing jobs, also had an adverse effect on the community. The shutting off of the lateral, natural drift of sand began to take its toll. By the 1980s and 1990s the town saw severe erosion problems. Many lakefront residents constructed seawalls to protect their property from the wrath of Lake Michigan.

Ogden Dunes's future may be embedded in its past

Fifty years into the future, Ogden Dunes likely won't look much different than it does today.

Celebrating its 90th anniversary in 2015, residents still flock to the community for its peaceful setting, nearness to Lake Michigan and residents' desire to conserve the natural surroundings.

* "Because of the way our town is, it is almost entirely a residential community. I don't expect to see businesses coming into the town," Town Council President Tim Nelson said about the future. "The boundaries are set. I don't see a lot in the way of growth."

"What I see and hope for is that our town will be responsible in taking care of the environment and taking care of the natural resources of the town. In the future, there will be more technology, and I hope Ogden Dunes will provide a respite from that," Nelson said.

"Ogden Dunes will be in a good place in preservation and taking care of its surroundings. I hope it maintains a sense of community and hometown flair," Nelson said. "Our historical commitment to preservation and conservation will be even more important then."

* Jenifer Wilson, a more than 30-year resident who has moved from and back to the community several times, said she hopes Ogden Dunes will have the same appeal it had to draw her and her family to the town. That includes what she calls "the best of all worlds," with its proximity to the lake and Chicago, the natural amenities and low cost of living.

"It is important to me, and I hope we will just maintain the integrity of Ogden Dunes," Wilson said. "The world is coming closer and closer to Ogden Dunes."

Wilson said when the town was founded, it was an island, but development has come closer and closer to the town's boundaries.

She believes Portage's development of its north side master plan will have an impact, and a benefit, to residents here in the near future. The plans, she said, keep in mind the need to preserve natural elements while providing improvements such as trails and a better South Shore stop.

"Now is a crucial time for the town," she said, adding that infrastructure is declining, but she hopes as it is replaced, those in power continue to look to the past and do upgrades, but maintain the feel of the town as it is now and throughout its history.

Valparaiso prides itself on high quality of life

Valparaiso has come a long way since it was included in the purchase of land from Potawatomi Indians by the U.S. government in October 1832.

Dunes rich with history and potential

Kouts celebrates its past while looking toward the future

KOUTS — Last year this town celebrated its 150th anniversary in a party that took place during the annual Pork Fest. At the same time, the Kan…

The Frank home was built in 1930. It was expanded in 1944 and is called the Hour Glass House. It serves as the home of the Ogden Dunes Historical Society.

Ogden Dunes was the site of a ski hill built in the late 1920s. It held international competitions with as many as 10,000 in attendance before it was torn down in 1935.

A photograph of "The Rafters," a group of young people at Ogden Dunes, taken on the beach in 1939.

A page from a real estate sales binder shows the construction of a home in Ogden Dunes in 1930.

In the late 1980s and 1990s, Ogden Dunes underwent severe erosion problems, which prompted lakefront residents to build seawalls to protect their homes from Lake Michigan.