"I pictured myself standing right there with them," said Bracich, 87, of Munster, who served with the U.S. Army's 1st Field Artillery Observation Battalion from 1952 through 1954, including 14 months in Korea.

The monument contains statues of 19 members of the armed services, representing a squad on patrol. The field of military personnel stands next to a memorial wall, which represents the 38th parallel, the division between North and South Korea. The wall also holds 2,400 photographs of men, women and dogs who served in Korea.

Bracich was one of more than 1.7 million U.S. service members serving in theater during the war. Of those, 33,739 died in battle and another 2,835 died from non-combat causes.

Bracich, who came home and taught school for 42 years in Gary, had been to the memorial once before, but this time he was there with his "brothers," other men who had fought in Korea — these men, he said, understood what he felt without saying a word.

He and the other men were guests of Honor Flight Chicago on the nonprofit's April trip to Washington, D.C.

"I'd advise any guy who hasn't taken it, to get on that flight as fast as they can," said Bracich, adding he found it catahartic despite the roller coaster of emotions and thoughts that raced through his head the day of the trip. 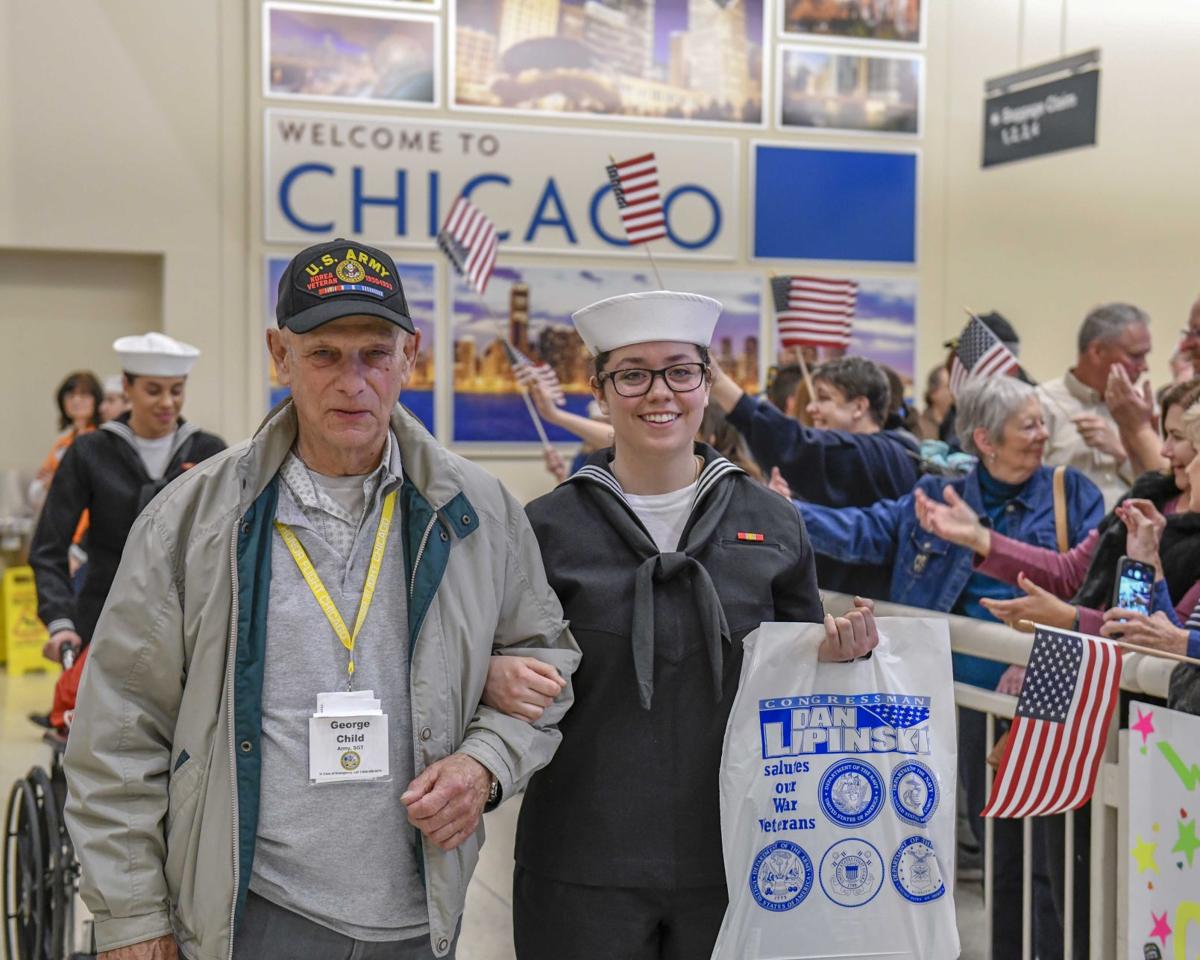 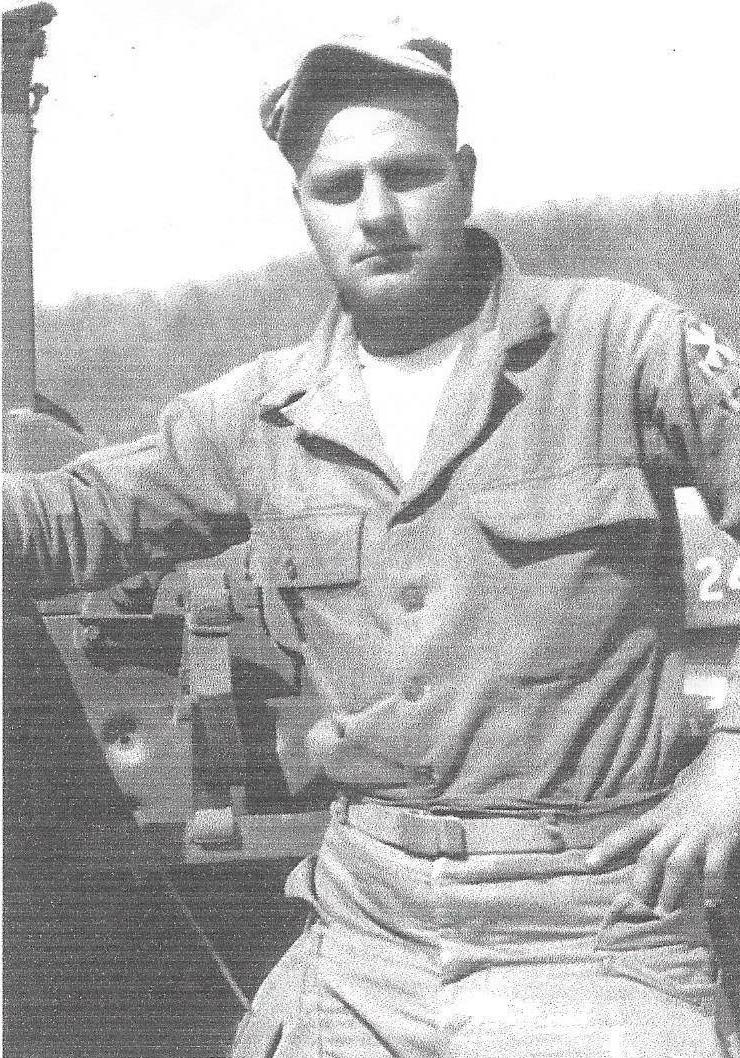 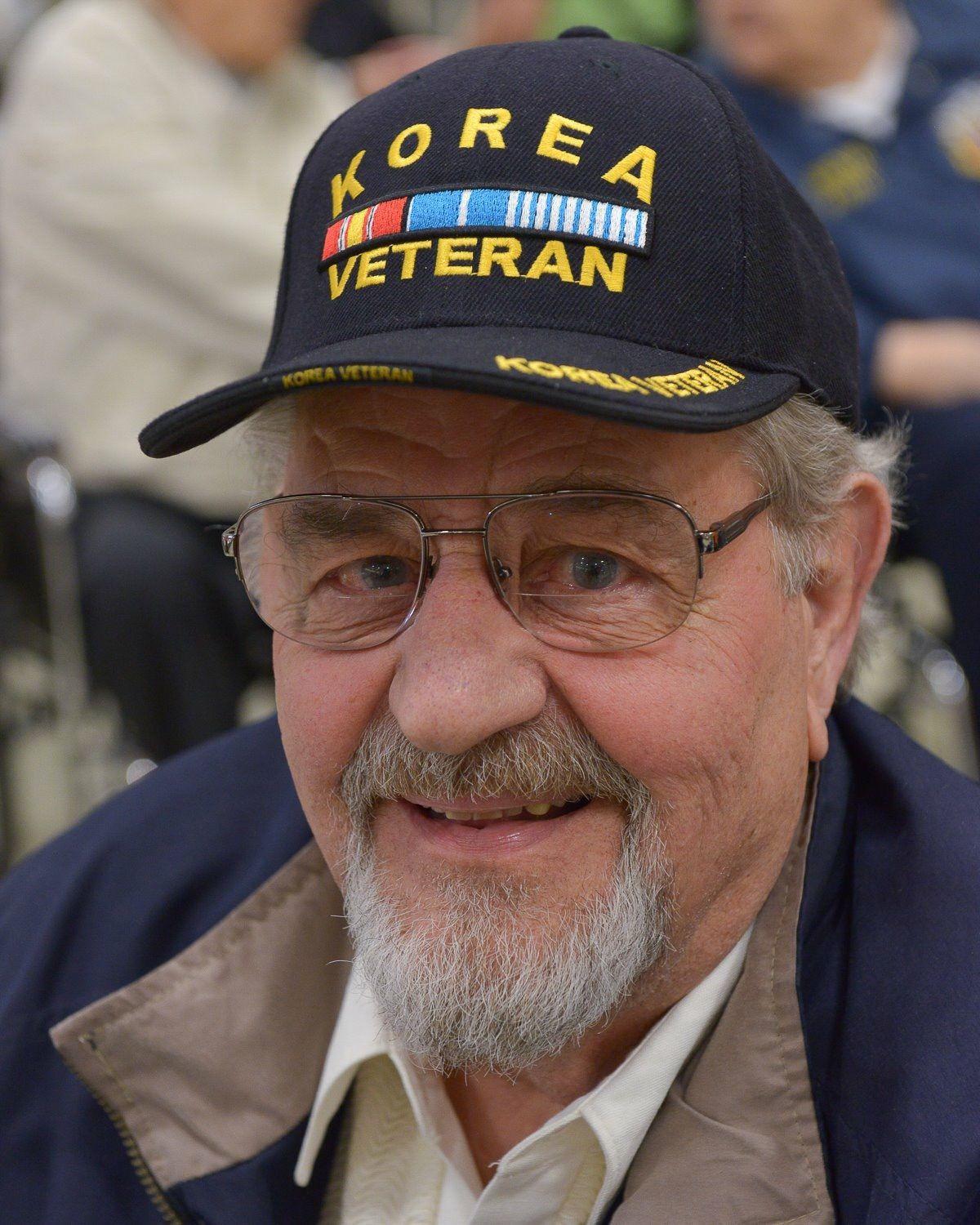 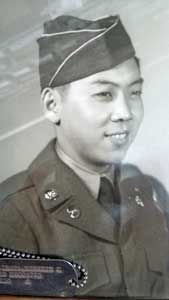 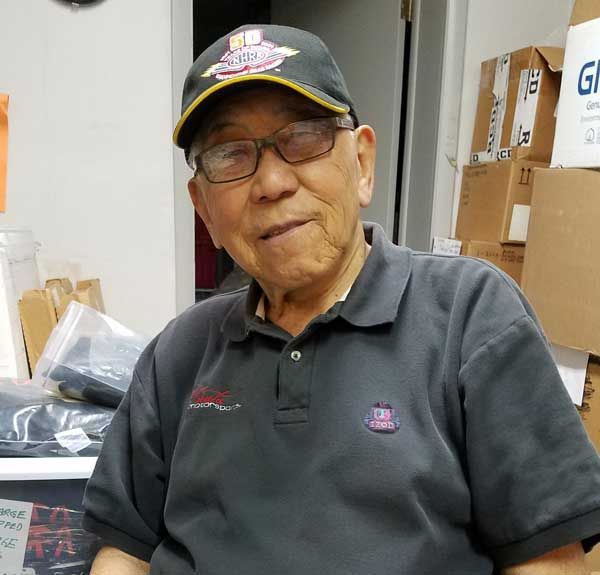 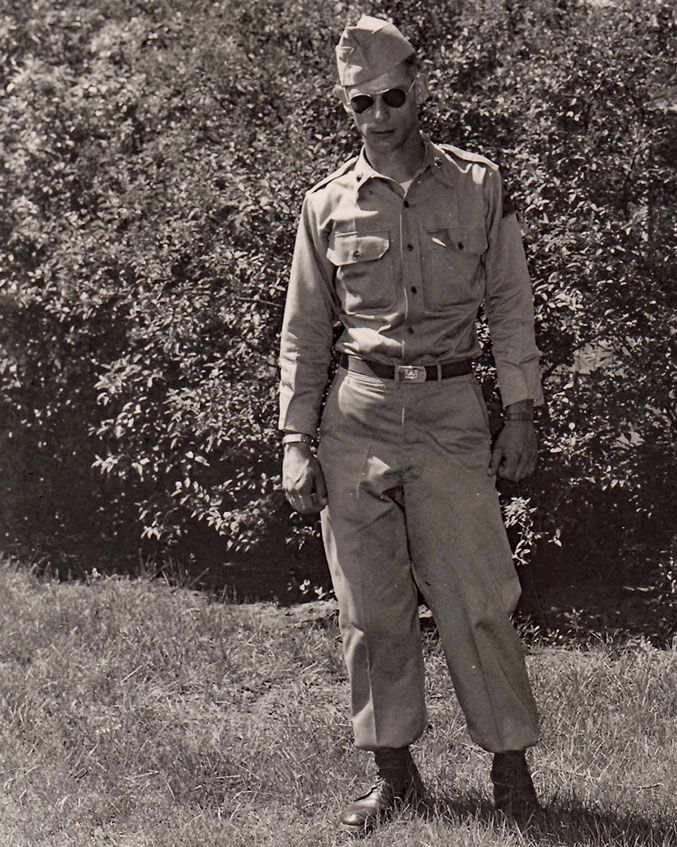 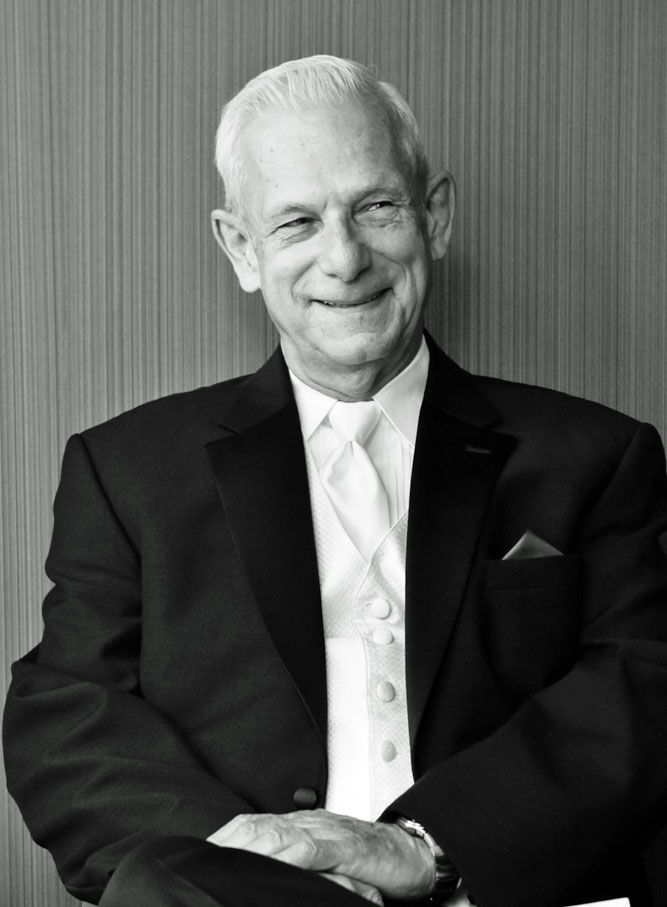 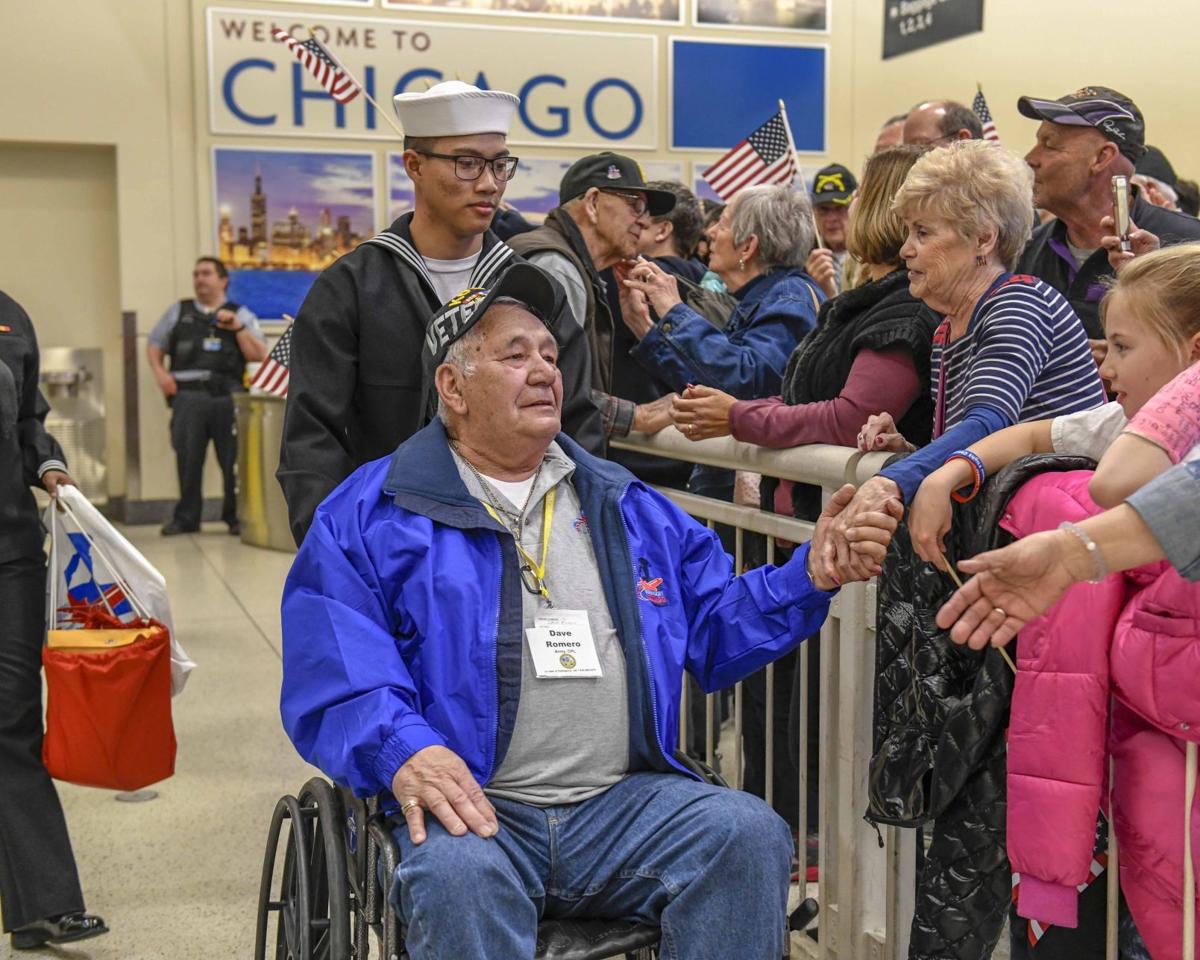 Dave Romero, of Hammond, is welcomed back April 11 at Midway Airport in Chicago by family, friends and strangers following his Honor Flight to Washington D.C. 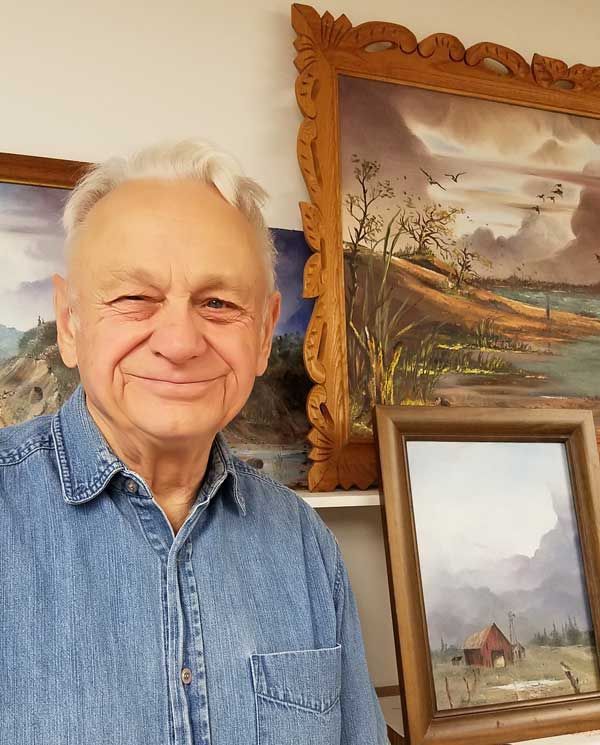 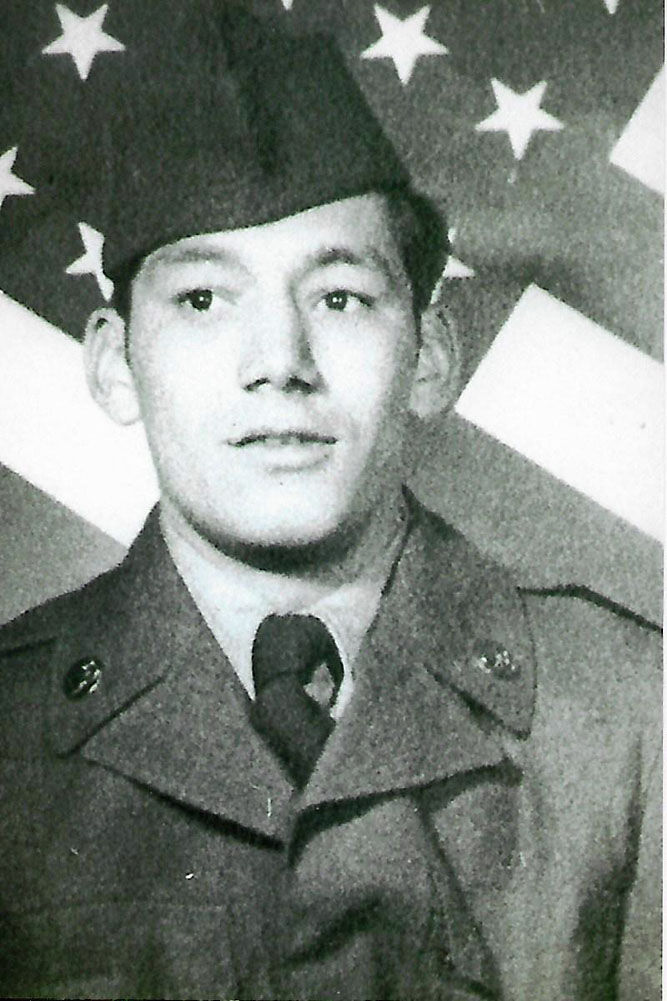 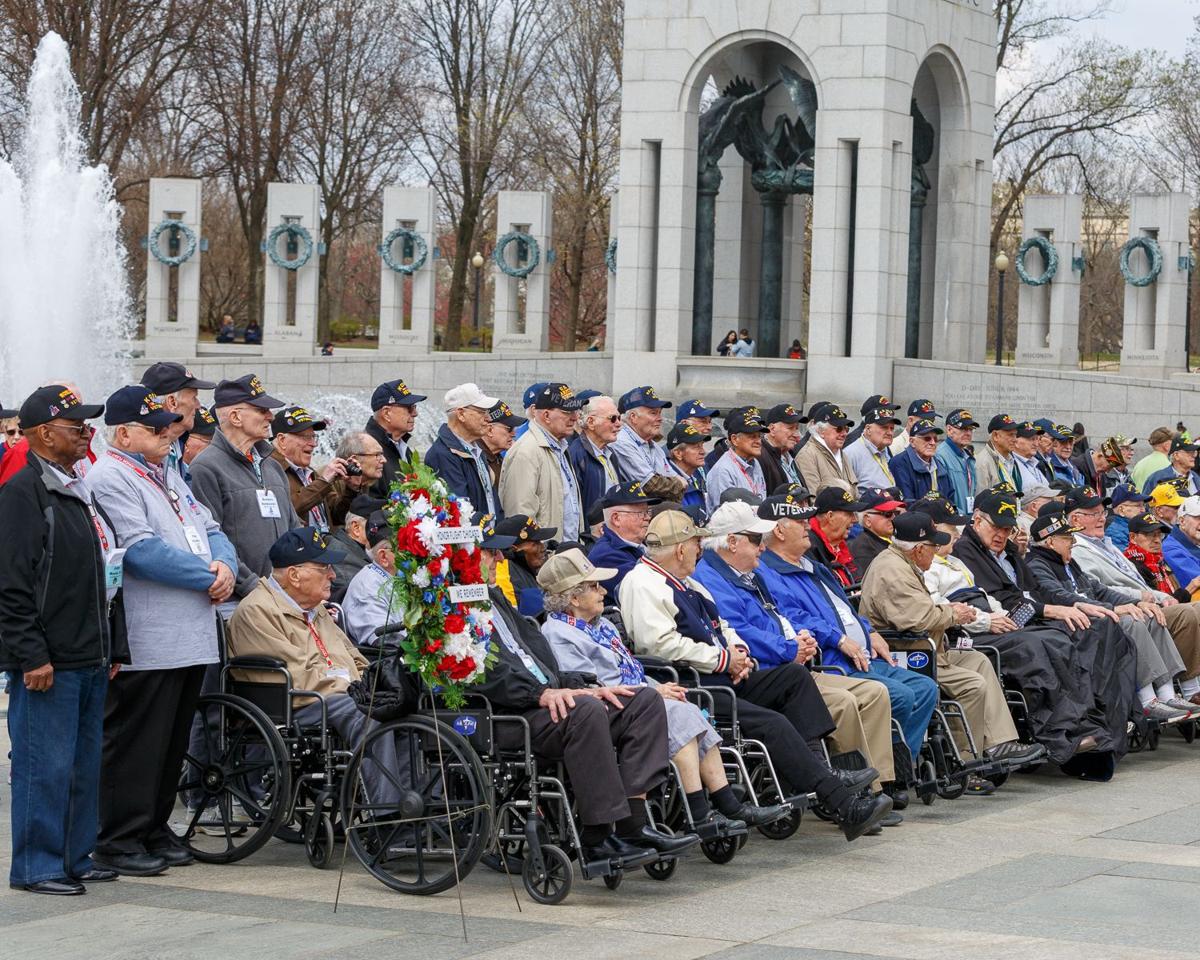 Veterans from Northwest Indiana and the greater Chicago area listen to a program while at the WWII memorial in Washington D.C. in April as part of an Honor Flight Chicago trip. 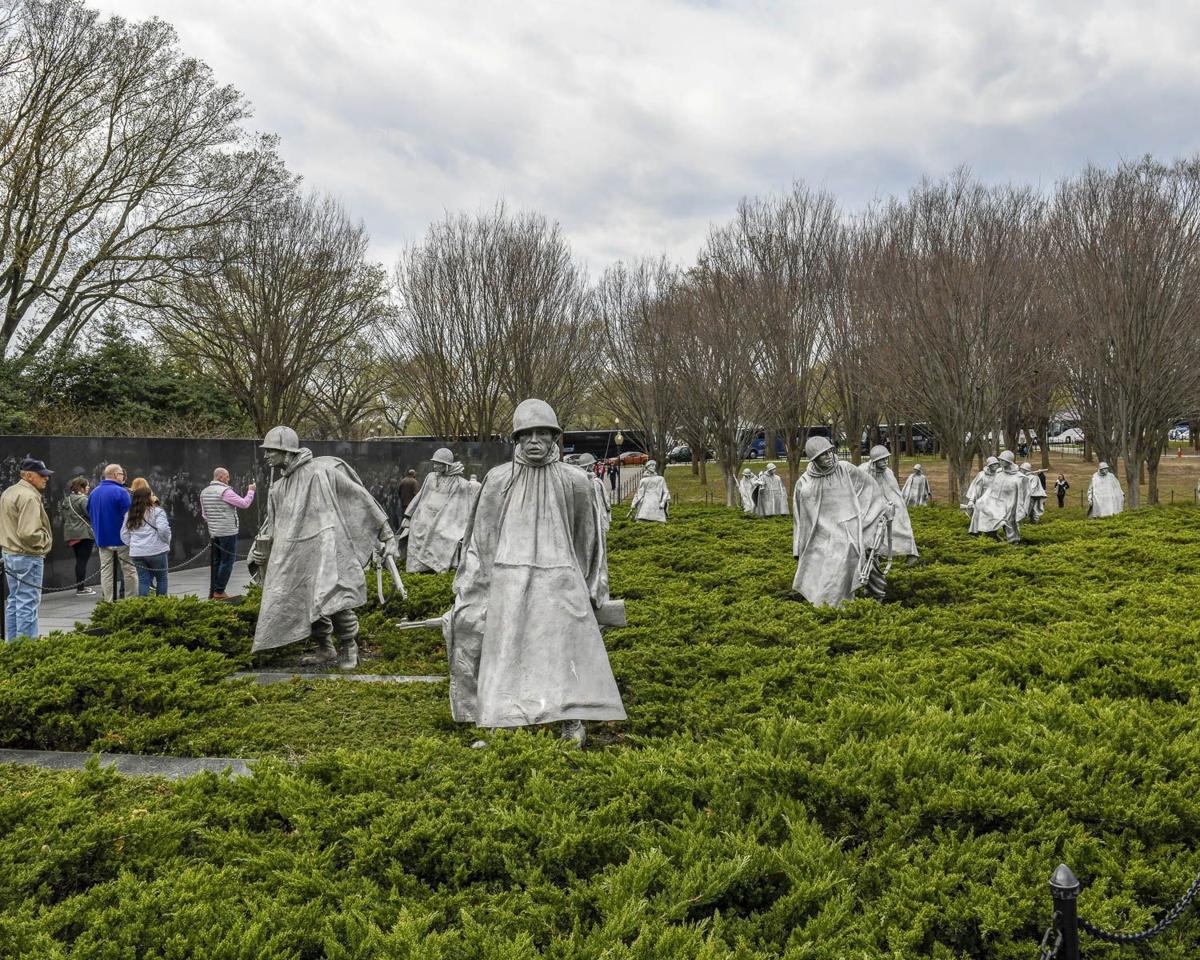 The Korean War Memorial in Washington, D.C., is pictured. 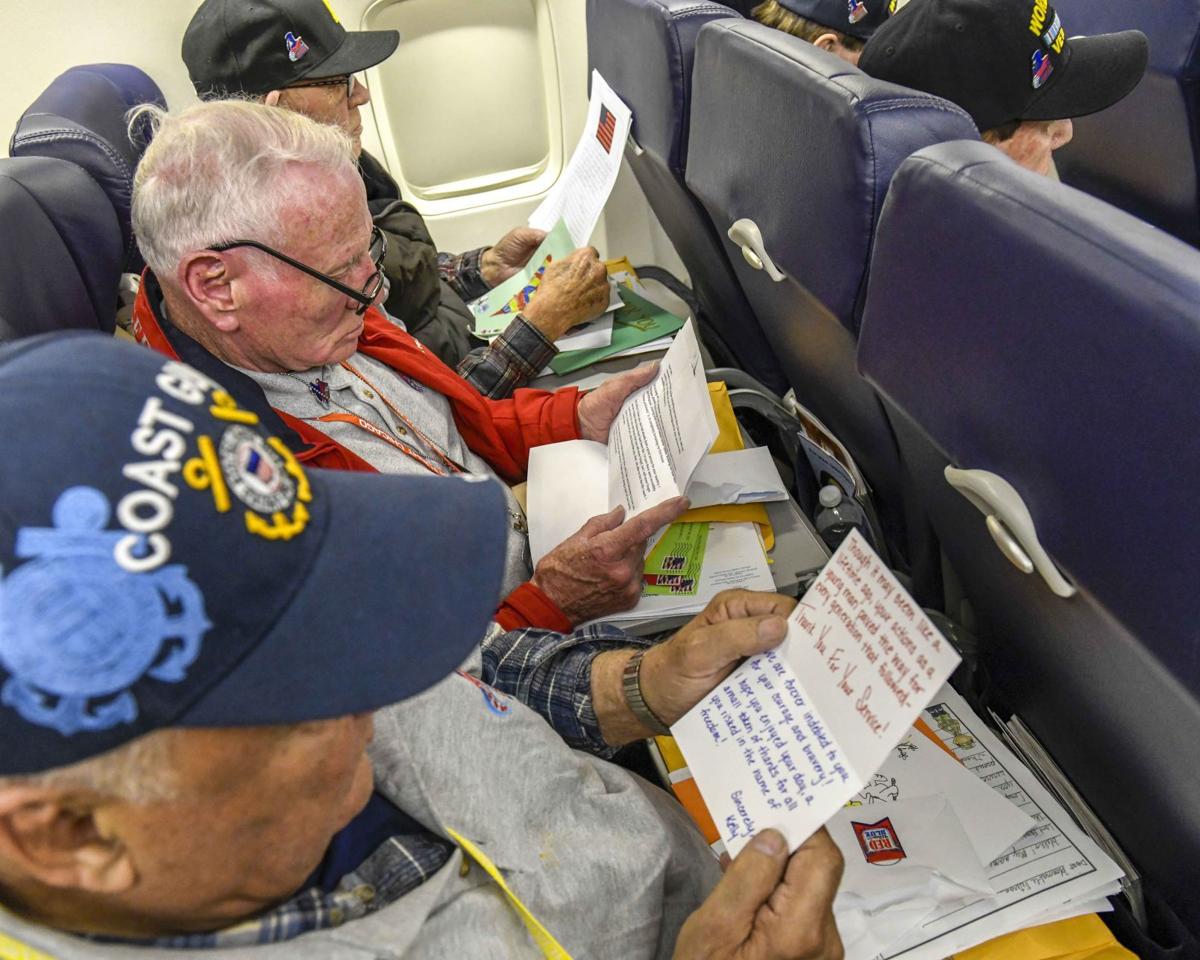 Veterans read their mail on their return trip from Washington D.C. to Chicago during an Honor Flight Chicago trip in April. During "mail call" they receive letters from family, friends and strangers. 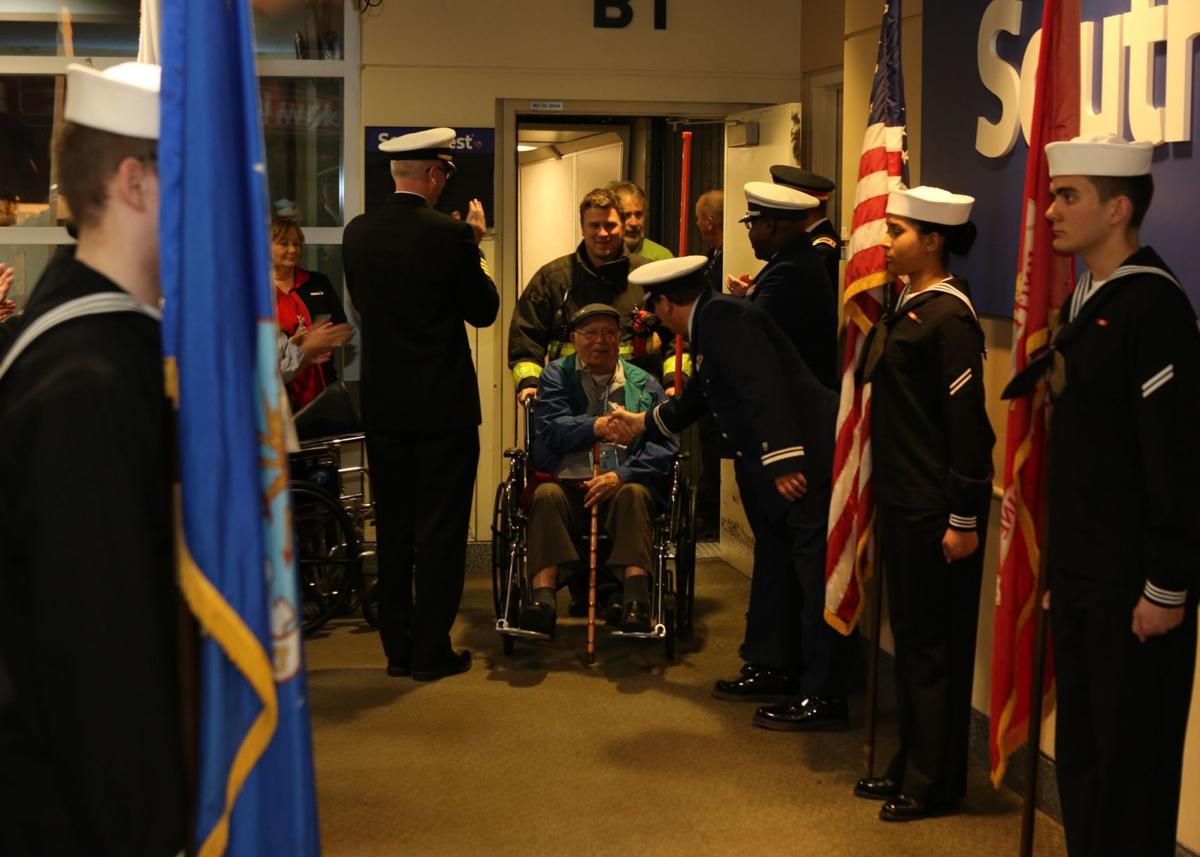 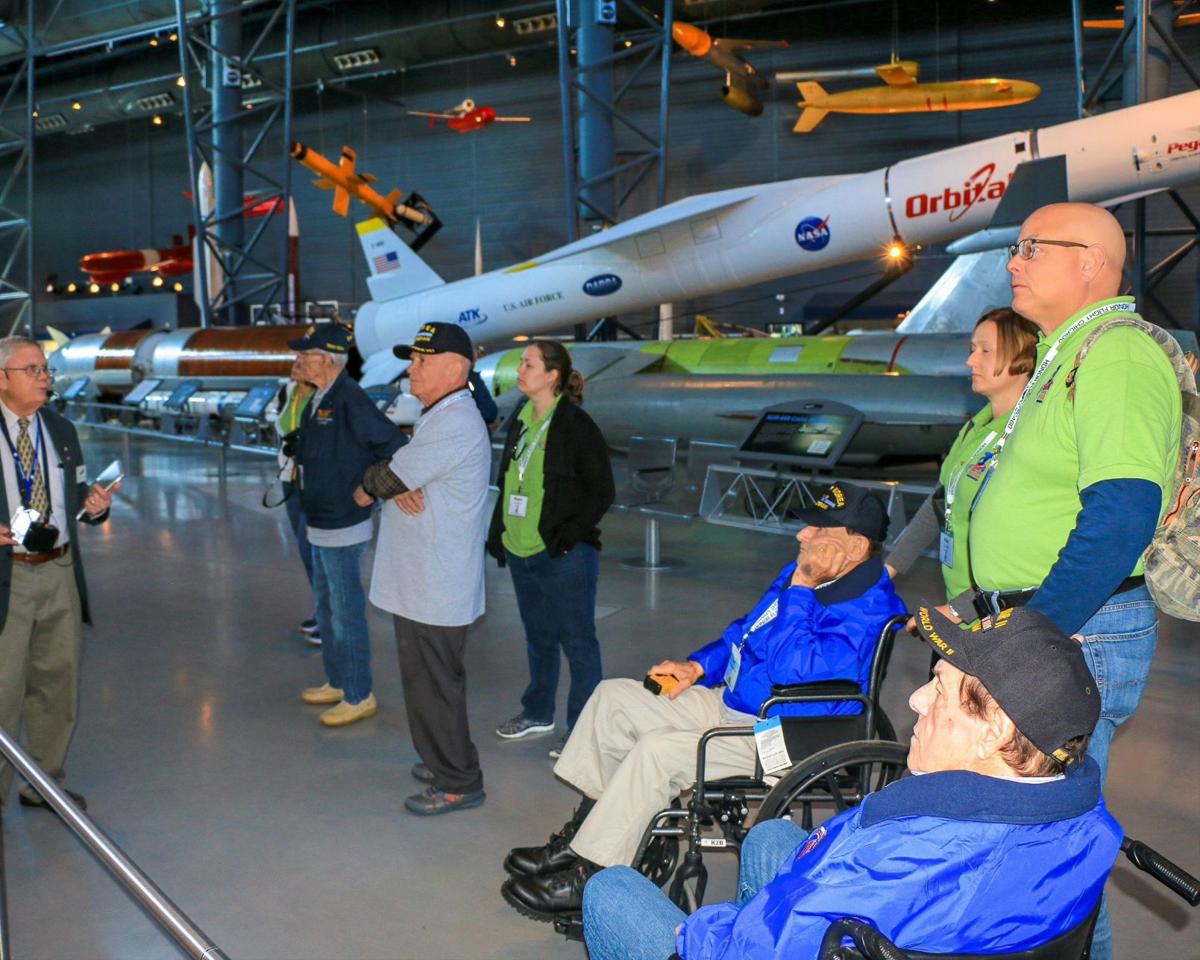 Veterans from Northwest Indiana and the Chicago area visited the Udvar-Hazy Air and Space Museum near Dulles International Airport in Washington D.C. as part of their Honor Flight Chicago trip. 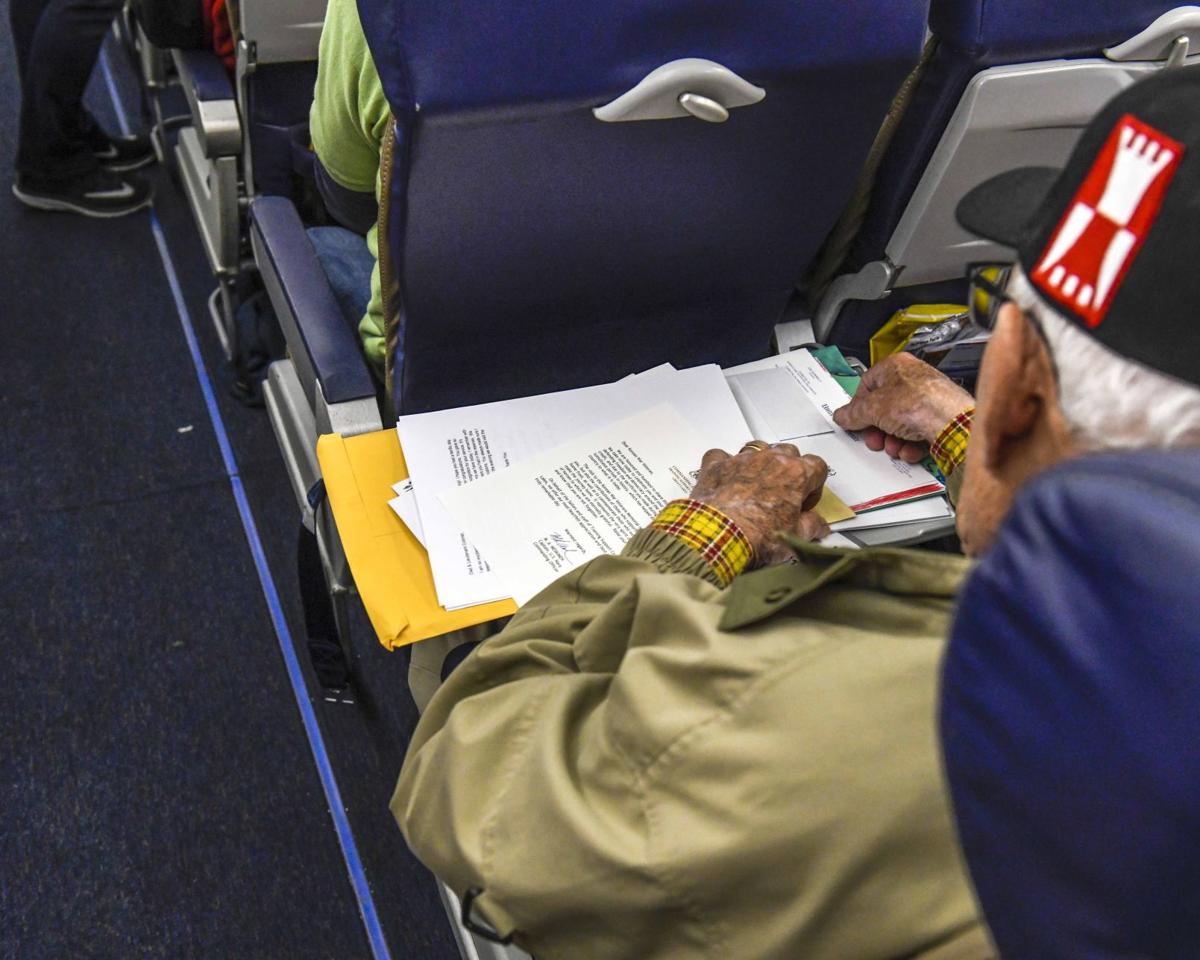 A veteran opens a packet of mail during the mail call aboard a flight home from Washington D.C. to Chicago in April. It is part of the Honor Flight Chicago program. 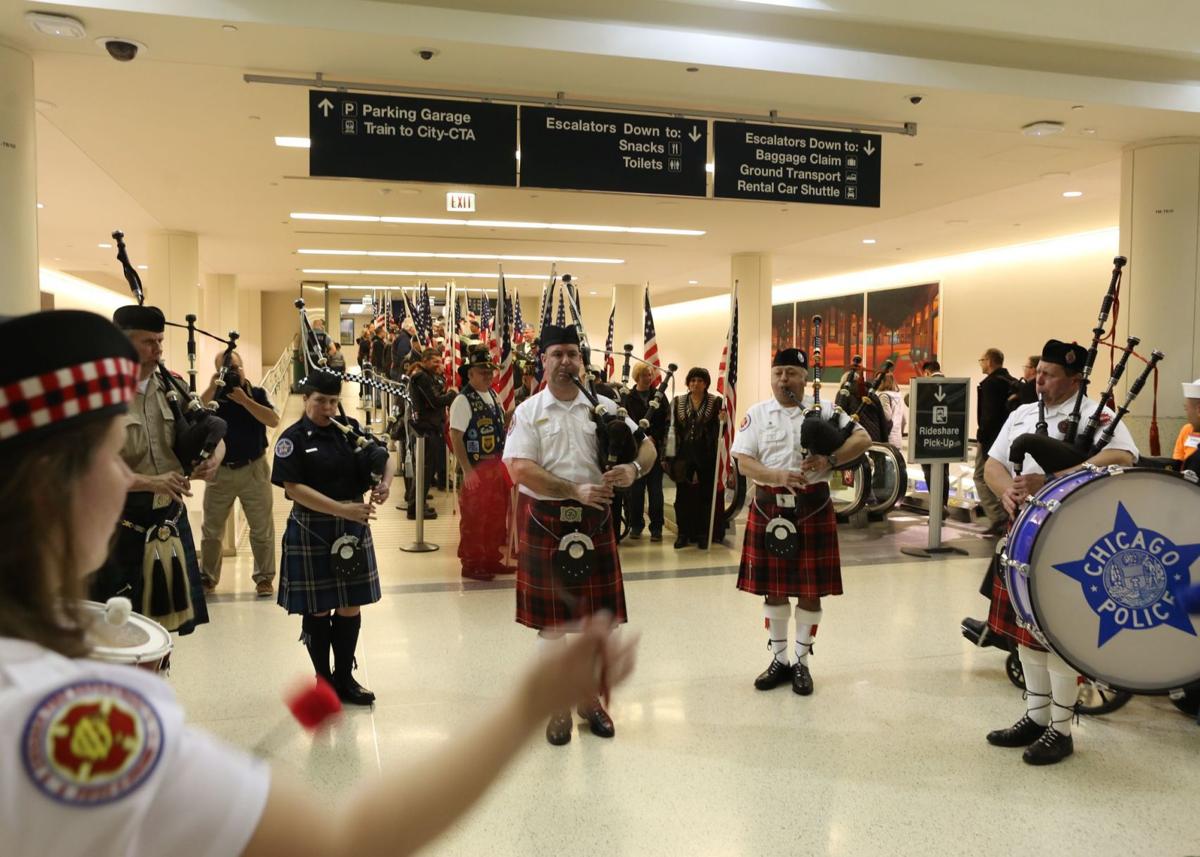 Bagpipers from the Chicago Police Department band welcome home veterans on their return from Washington D.C. during the Honor Flight Chicago trip in April. 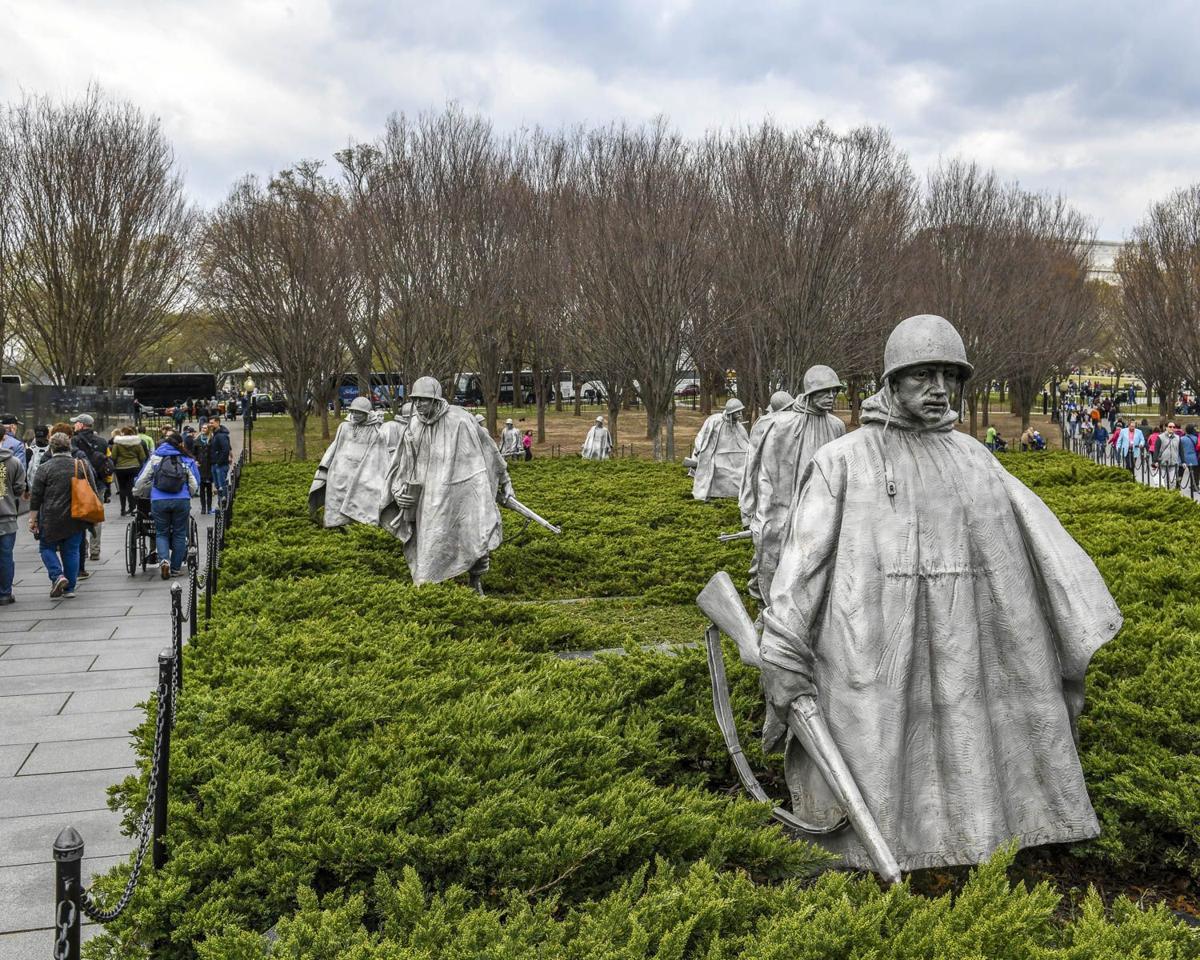 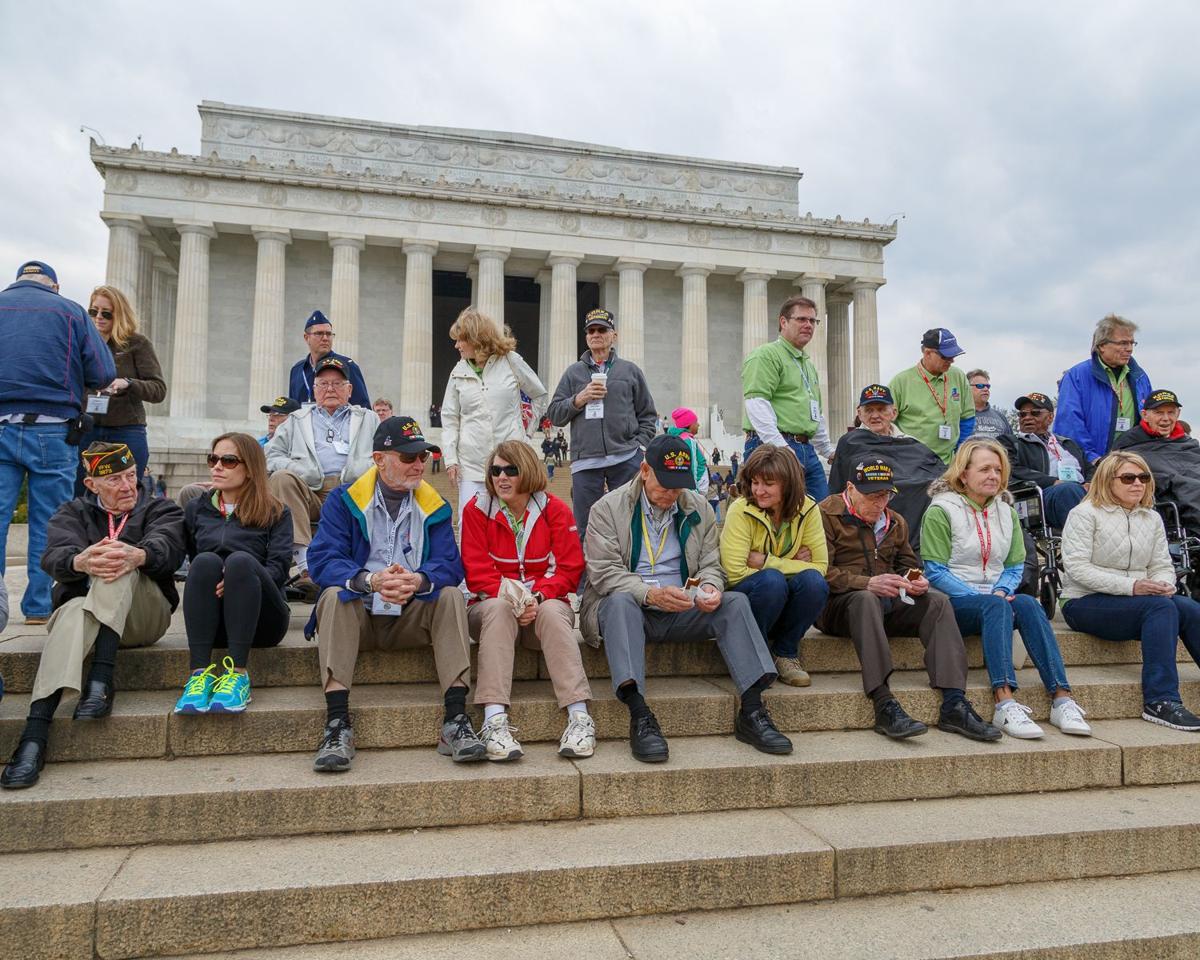 Veterans sit on the steps of the Lincoln Memorial during their Honor Flight Chicago trip to Washington D.C. in April. 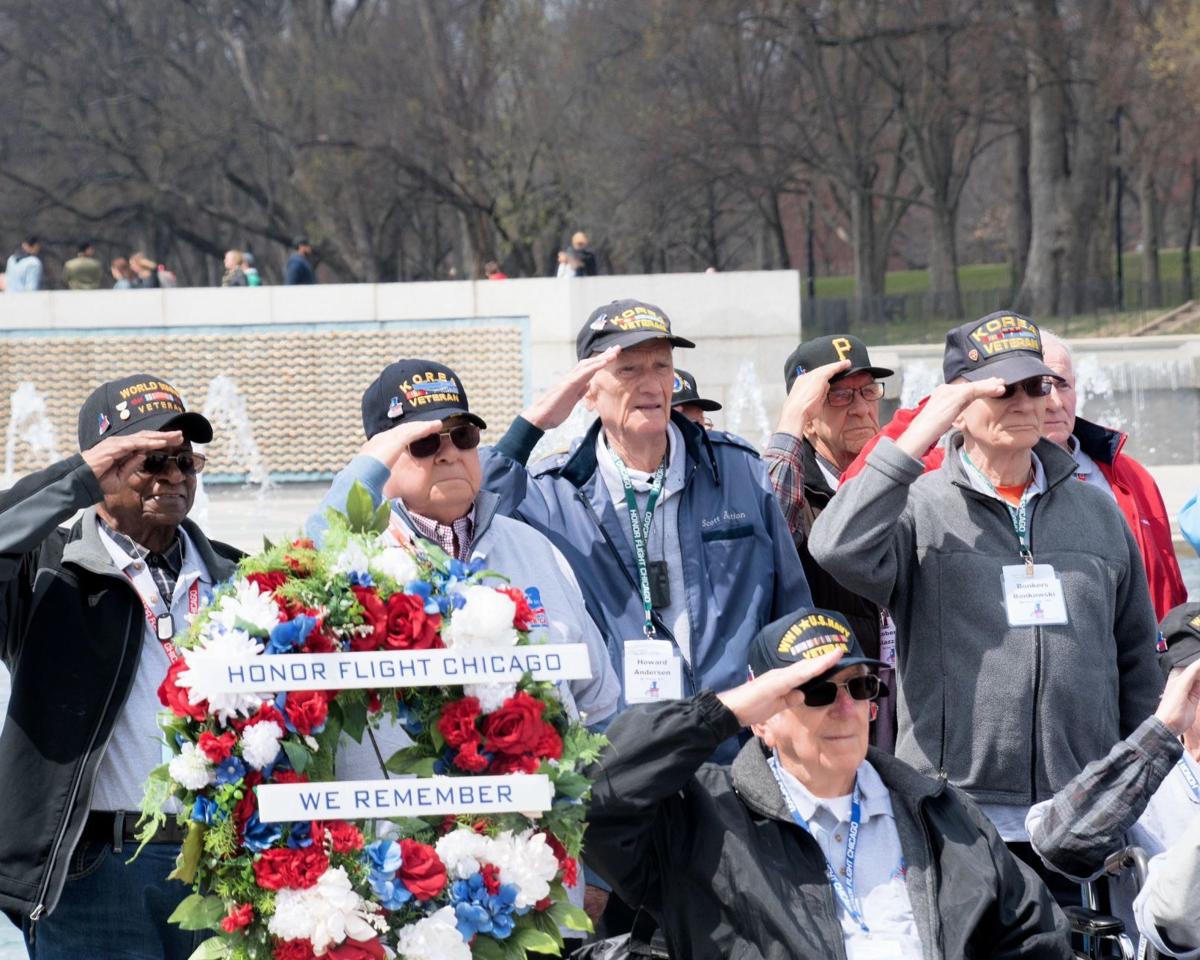 Veterans participating in an April 2018 Honor Flight Chicago trip to Washington D.C. salute during a program at the WWII memorial. 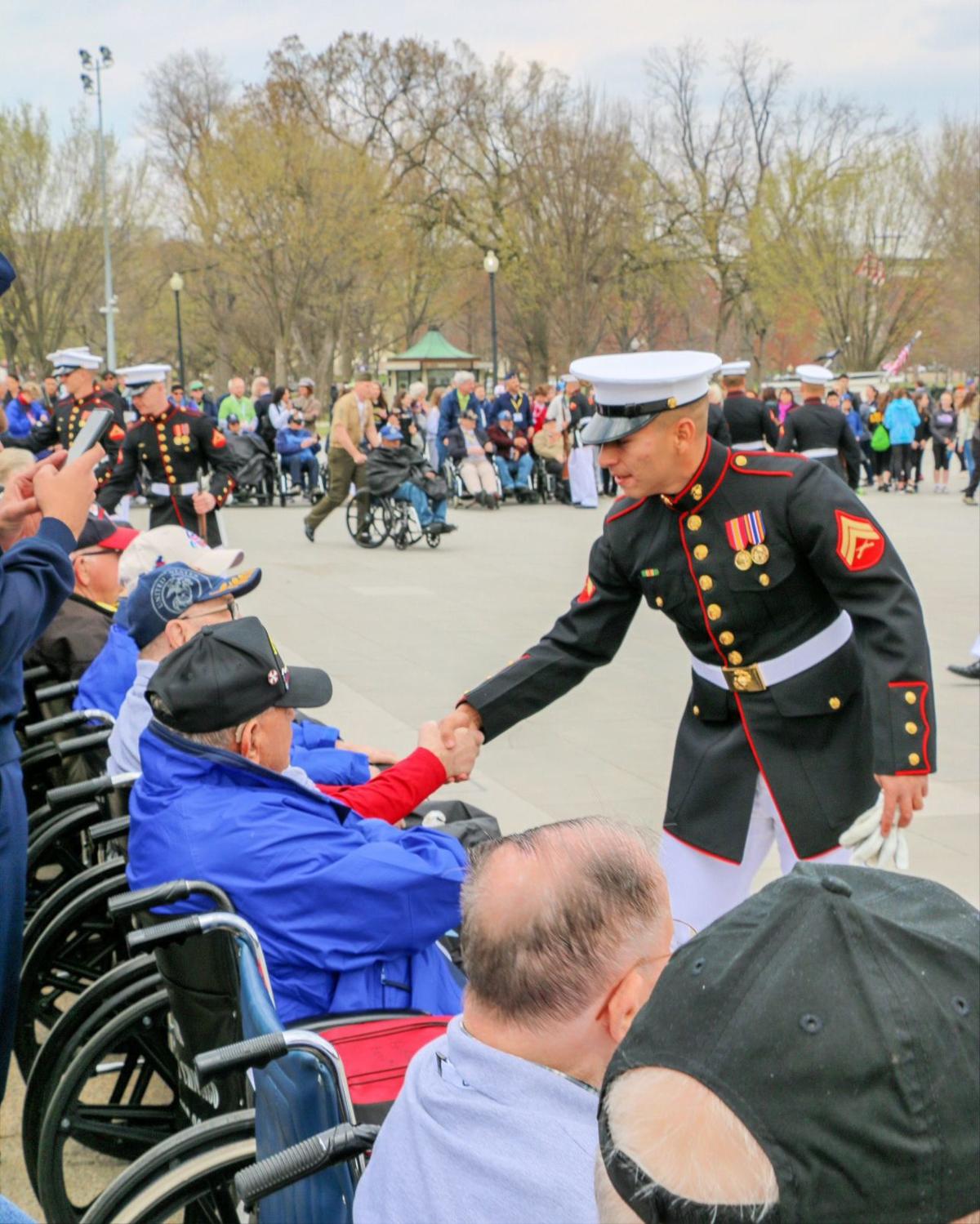 A member of the active military greets veterans from Northwest Indiana and the Chicago area during an April Honor Flight Chicago trip to Washington, D.C. 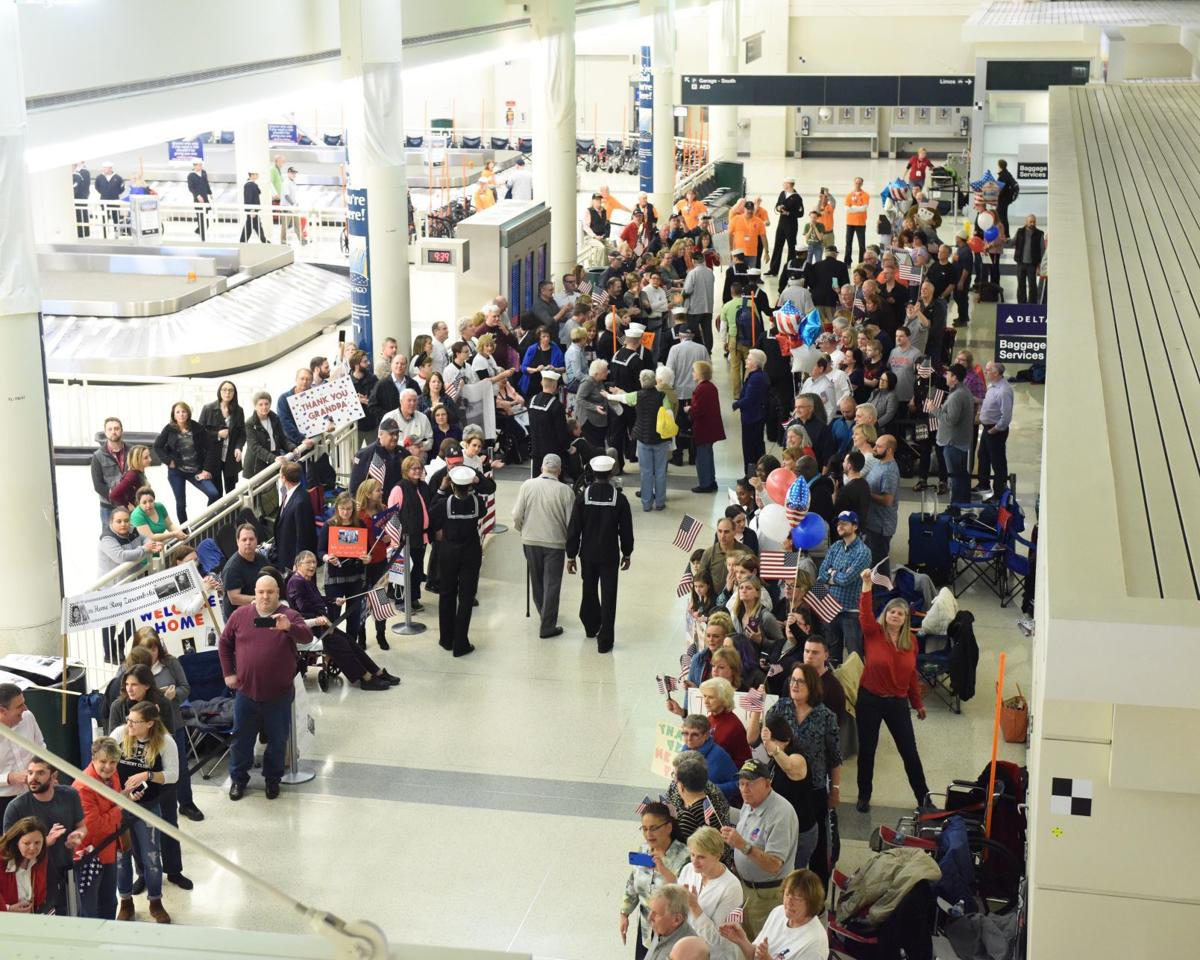 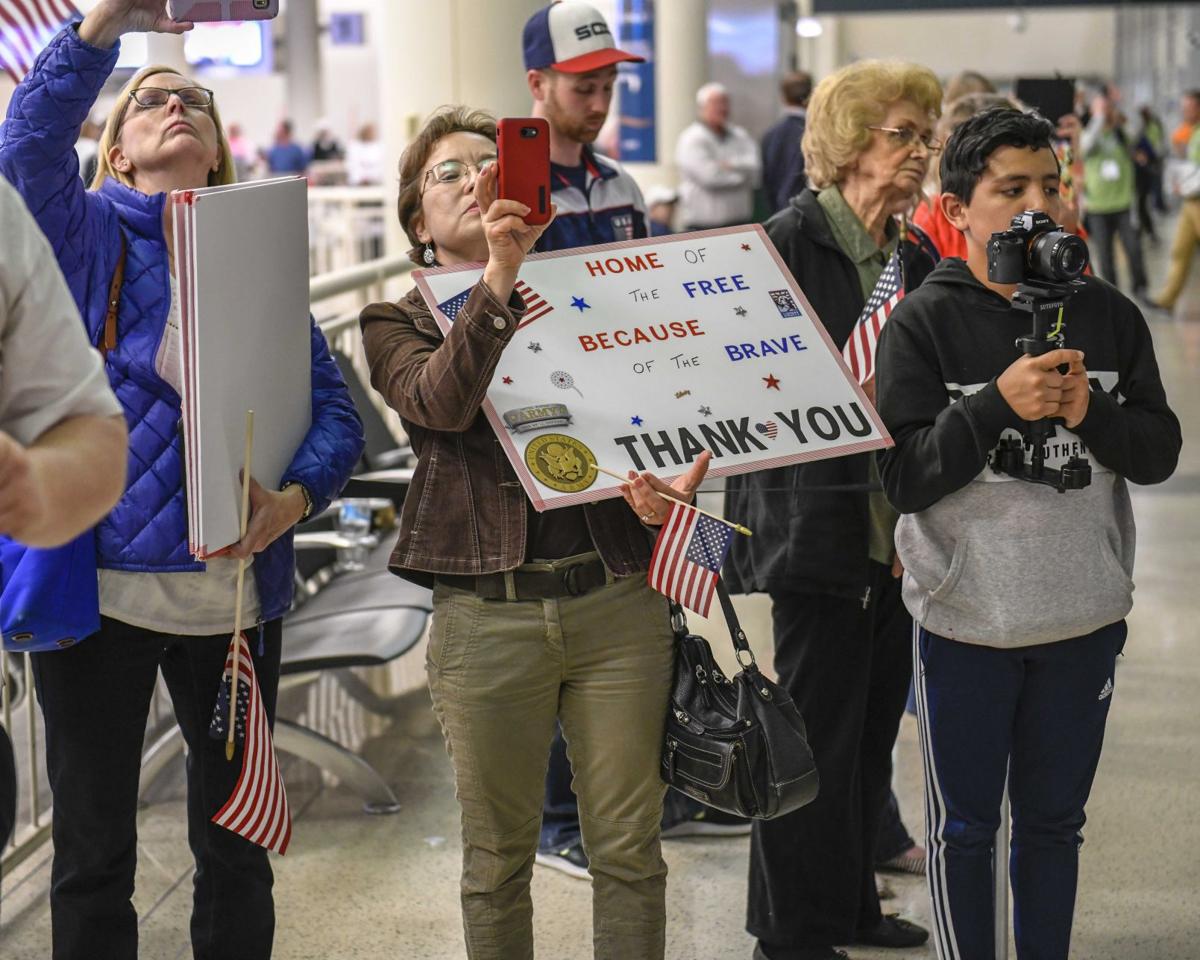 Crowds welcome home veterans at Midway Airport in April after they returned from their Honor Flight Chicago trip to Washington D.C. 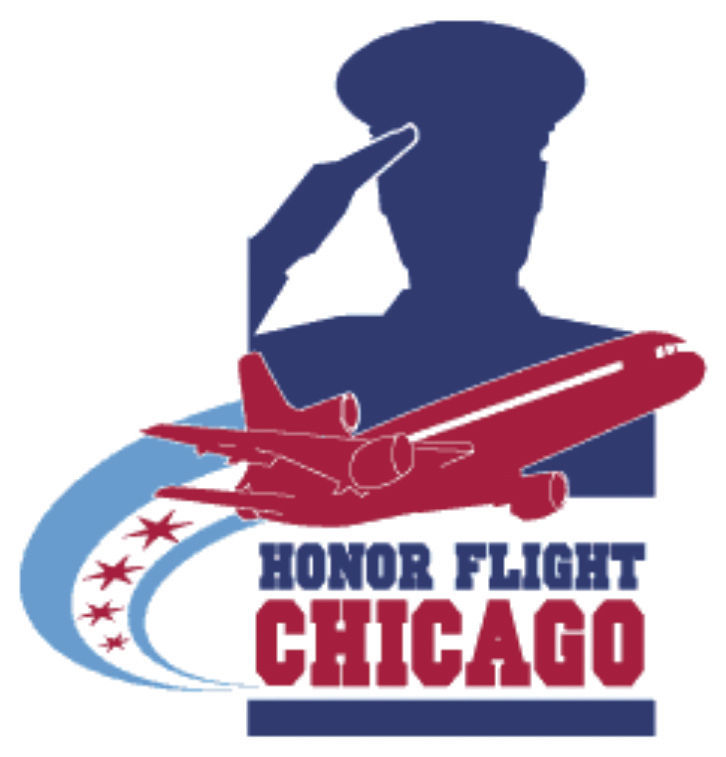 Since its inception in June 2008, Honor Flight Chicago has flown more than 7,500 World War II and Korean veterans on 84 flights to Washington, D.C., for a whirlwind 16-hour trip visiting memorials, monuments and museums and, for some, finally getting the welcome home they never had back then.

Honor Flights began in 2005 in North Carolina, said Len Sherwinski, of Crown Point, and an Honor Flight Chicago ambassador. Chicago organized its own "branch" in 2008 and is the largest of the more than 130 Honor Flight organizations that operate independently, but with similar missions, across the country.

"We are making sure our most senior veterans get to see their memorial," said Sherwinski, a Vietnam veteran who has volunteered for HFC for six years.

Sherwinski said about 1,500 volunteer hours are put into each flight, from reviewing applications to escorting veterans during the trip to seeking donations. The one-day trips, which begin at 4 a.m. at Midway International Airport and end at the same place at about 8 p.m., are at no cost to veterans or their families. Each flight has an eight-nurse and two-doctor volunteer medical team, each of whom also pays his or her own way. Each veteran is paired with a volunteer guardian, who has to undergo specialized training, for the day.

The group is supported through donations, grants and fundraising events, said Sherwinski, adding 92 cents of each dollar collected goes directly to veteran flights.

Don Grott said he still gets "choked up" when he thinks about his Honor Flight trip late last year.

"It was just awesome. It just blew my mind so much time and effort was put into everything," said Grott, 84, of LaPorte. Grott served in the U.S. Air Force from 1953 to 1957. He never was stationed in Korea, but he spent his time training pilots who eventually would see battle.

"Everything fascinated me and surprised me," he said, adding the welcoming home ceremony and the welcome the veterans got not only in Chicago, but in D.C., affected him the most.

Grott said in D.C, police and firefighters met them at the airport. As they traveled from site to site, they were escorted.

"We never stopped for a stoplight," he said.

When he came home, he expected one family member to greet him. Instead there were 13 from four states.

"It was fantastic. I appreciate these people so much," Grott said the HFC volunteers, who not only arranged families to show up at the end of the day, but also arranged a mail call activity on the returning flight.

Mail call, said George Child, of Chesterton, came as a complete surprise as each veteran was given a packet of cards and letters from friends, family and strangers to read on the return flight to Chicago.

That, he said, was followed by the welcome home ceremony, where the veterans were met by service personnel from the Naval Station Great Lakes, along with bands and family members.

"There were people lined up to the baggage area. I must have shook 1,000 hands that day. I did not expect the scope of what we did that day," said Child, 84, who served with the U.S. Army's Engineer 556th Technical Intelligence Team stationed in Seoul, South Korea.

Kenny Hirata, 90, of Lowell, said the welcome home ceremony was the highlight of his trip in April, as was seeing the Korean War Monument.

"There were two rows of crowded people, and my wife, son and nephew were in the crowd. Seeing the general public welcome us was more exciting than Washington itself," said Hirata, a Japanese-American who spent part of his youth during WWII in an interment camp in his native California. After being drafted by the U.S. Army in 1950, he served with the U.S. Army's 101st Airborne 99th Infantry in Korea.

The welcome home ceremony isn't only emotional for the veteran, but for the family, too, said Sandra Romero, of Hammond. Her husband, David, went on last month's flight. David Romero, 86, was stationed with the U.S. Army's 2nd Armored Division in Germany during his time in the service from 1952 to 1954.

"It didn't take but two seconds for the tears to start," Sandra Romero said about her husband's welcome home ceremony. "When you hear the bagpipes start, you know their plane is landing.

"It was a great honor for him to have done it. When they got out of the service, they gave him money and a duffel bag and sent him on his way."

For some of the Region veterans who have gone on an Honor Flight, they've tried to pay it back — or forward.

Grott, a painter, donated an original oil paint that the group auctioned to raise funds. He's also personally recruited five other veterans to apply for the trip.

"I try and tell them this is an opportunity they will never experience otherwise in their lifetime. I have nothing but admiration for these people," said Grott, adding he remains "flabbergasted" at the experience.

Bracich was so touched by his own welcome home ceremony that he's gone to Midway International Airport three times since his own flight "to be part of the crowd," to welcome his "brothers" home.

Honor Flight Chicago took its first flight in June 2008. Since then, the nonprofit organization has taken more than 7,500 WWII and Korean War veterans to Washington, D.C., on 84 flights.

Throughout the 16-hour day, veterans are escorted by volunteer guardians. They are entertained by various bands and musical groups and receive recognition and welcoming by several military and first responder groups in both Chicago and Washington, D.C. On the return trip home, they participate in "mail call" and are welcomed back to Chicago's Midway Airport in a special ceremony.

There is no cost to the veteran to participate in the trip, which is now taking WWII and Korean War veterans. Trips will expand soon to include Vietnam War veterans.

For more information, to get an application, to volunteer or to donate, visit honorflightchicago.org

PORTER — On one side of the Yost Elementary School cafeteria Wednesday morning, first-graders were throwing pickle slices at a board covered w…

UNION TOWNSHIP — Just a decade ago, enrollment in Union Township schools was pushing record levels, and the district had to close its doors to…

Valparaiso remembers those who gave the ultimate sacrifice during memorial service

VALPARAISO — Among the men Police Lt. Tom Horn will be remembering and honoring this Memorial Day weekend are U.S. Army Spc. Aaron Fields and …

WHITING — The city on Thursday unveiled and dedicated a newly restored Vietnam Veterans Memorial at the corner of 119th and Schrage avenues.

Dyer native Leonard A. Tyma was just 21 when he and fellow Marines found themselves facing stiff Japanese resistance in November 1943 on the s…

Honor Flight says ‘thank you’ to veterans with free trip to D.C.

“Thank you” is one of the most powerful statements that could be given to someone who sacrificed for their country. But, for many senior veter…

HIGHLAND | As a military policeman in the early 1950s in Fort Bragg, N.C., Vernon C. Miller was a model soldier.

When John Leisge says he was on the front line in the Korean War, he means it. "We were past the main line of resistance," Leisge, of DeMotte, said.