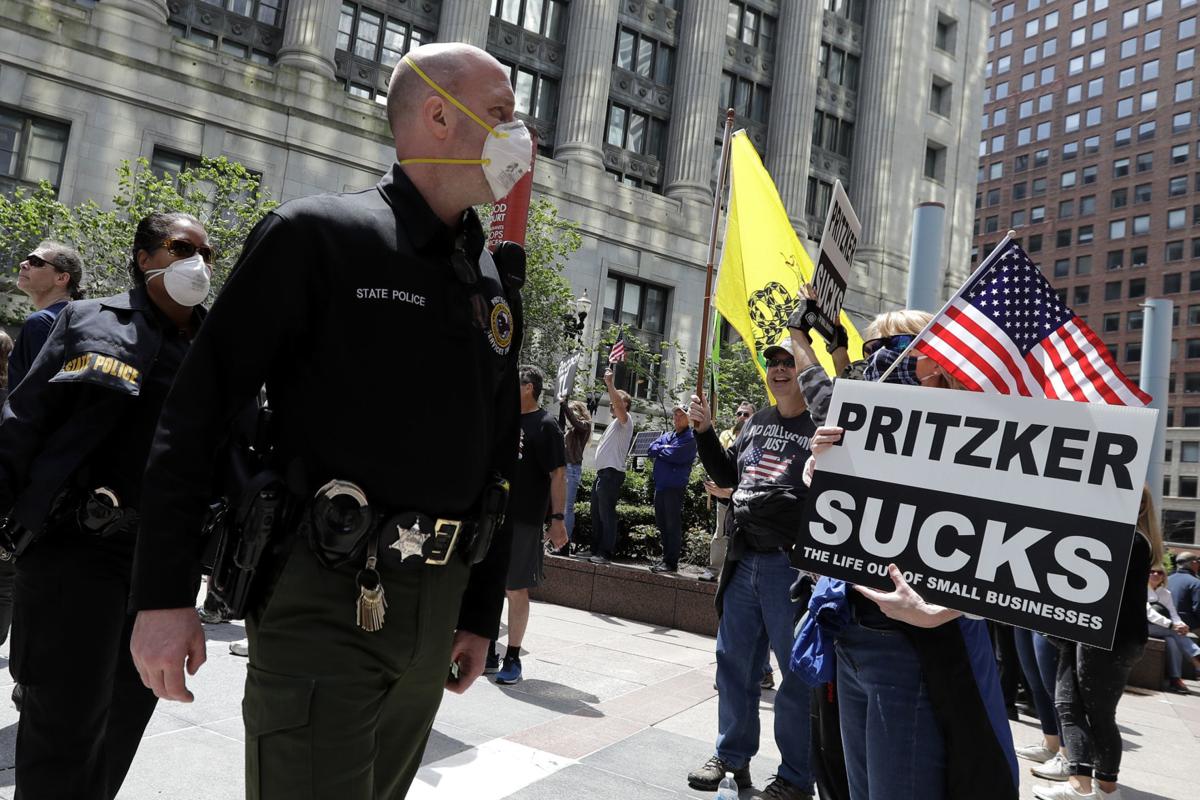 Illinois State Police officers watch protesters during a rally calling for the state to reopen the economy, Saturday, May 16, outside the Thompson Center in downtown Chicago. 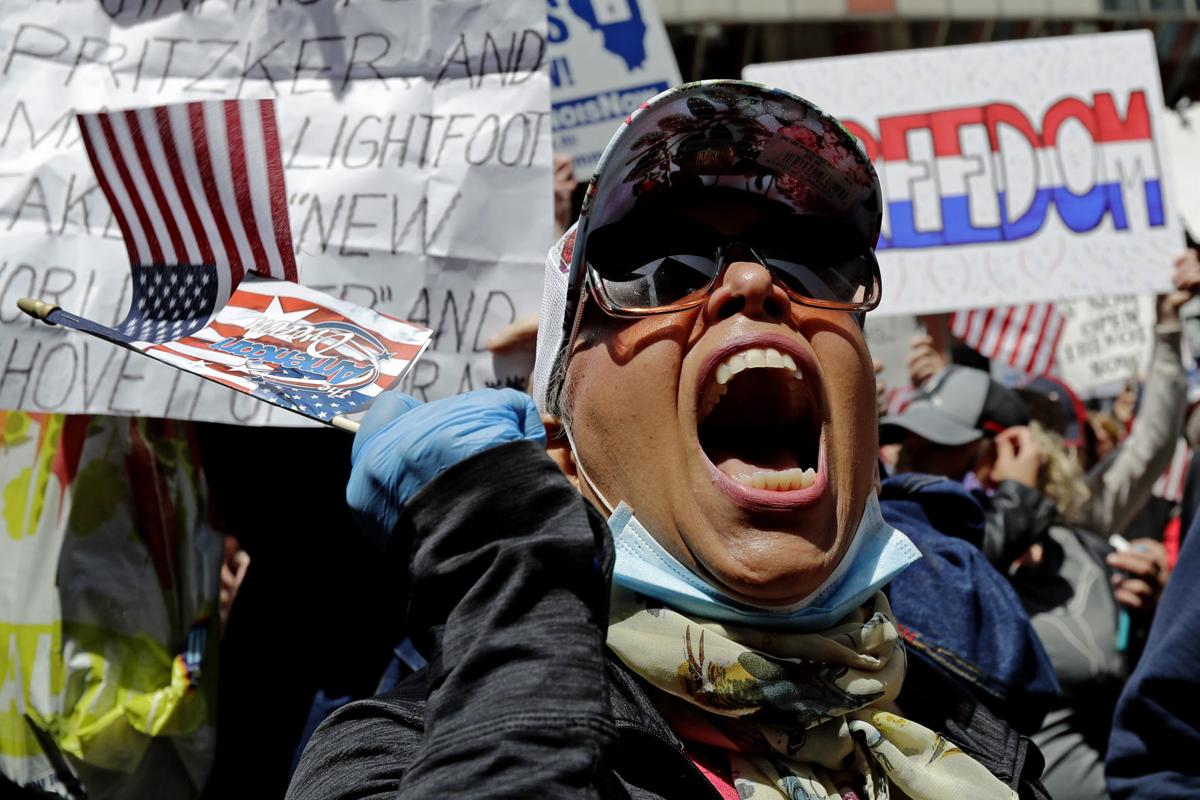 A protester shouts during a rally calling for the state to reopen the economy outside the Thompson Center in downtown Chicago, Saturday. 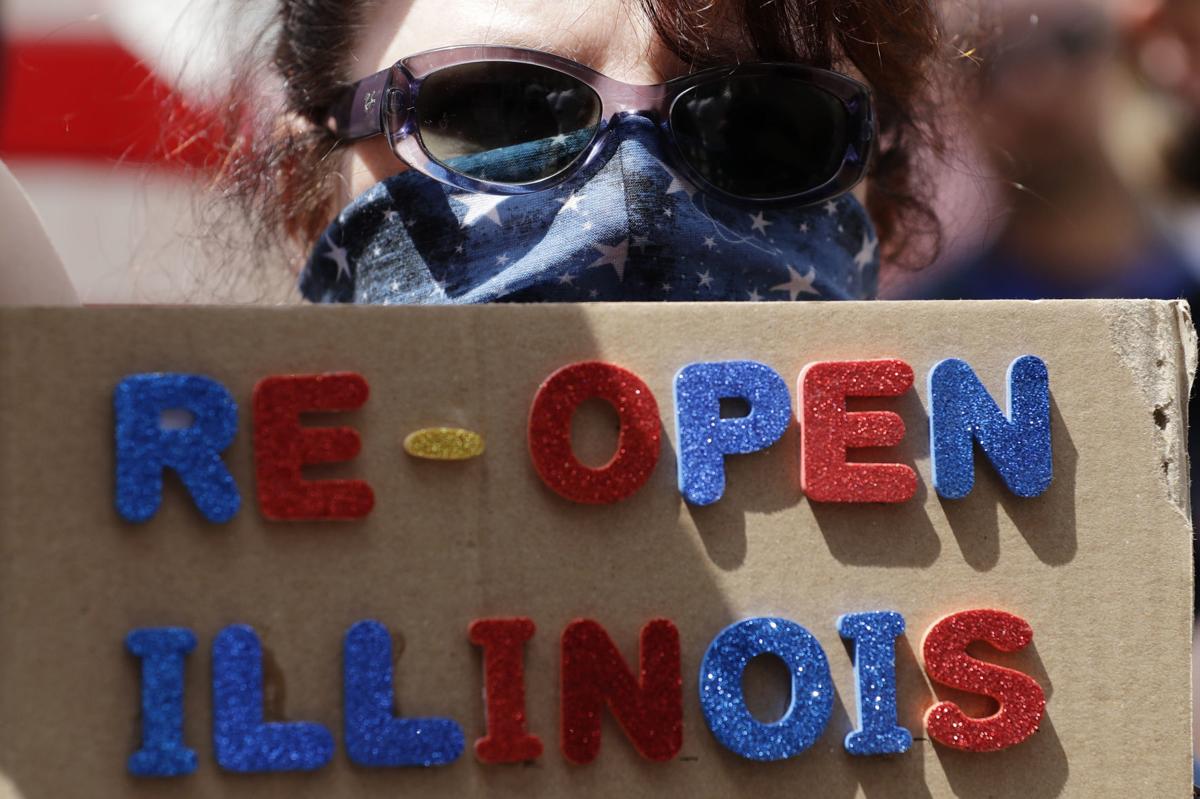 A protester holds a sign during a rally calling for the state to reopen the economy, Saturday, outside the Thompson Center in downtown Chicago. 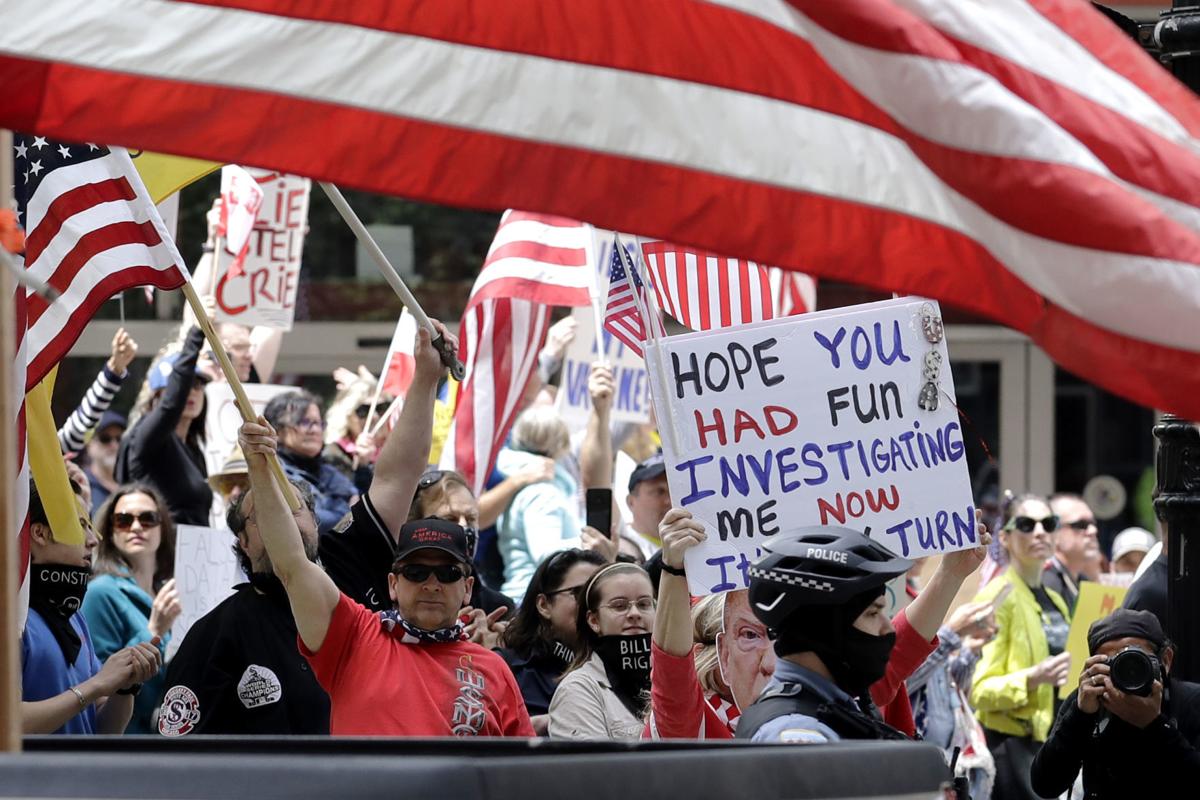 Protesters hold up signs during a rally calling for the state to reopen the economy, Saturday, outside the Thompson Center in downtown Chicago.

Pritzker’s order requires businesses to remain closed with few exceptions because of the coronavirus pandemic. Now, a violation is a Class A misdemeanor, punishable by a fine of up to $2,500, according to WTTW-TV.

Valpo plans to reopen to the public — cautiously

The change took effect Friday when the rules were filed. Legislators on a bipartisan oversight committee have the chance to review it Wednesday. If they don't reject it, the rules remain in effect for 150 days.

“Nobody’s getting arrested or handcuffed,' she said. "But they are getting a citation where they would have to go to court."

Salons, restaurants, and the Southlake Mall reopens today — here's what you need to know

“These rules are a legal overreach and beyond the scope of the governor’s authority," House Republican Leader Jim Durkin said in a statement Sunday. "It will be a dark day in Illinois when we charge small businesses with a jailable crime for salvaging their livelihoods.”

For most people, the coronavirus causes mild or moderate symptoms, such as fever and cough. But for others, especially older people and those with existing health conditions, it can cause severe symptoms and lead to death.

Gallery: Protesters take to the streets to oppose shutdown orders in Midwestern states

Adler Planetarium lays off 120 employees due to coronavirus

Chicago’s lakefront planetarium will lay off 120 part-time and full-time employees because of revenue loss during the coronavirus pandemic.

The Catholic Foundation for Northwest Indiana has decided that all 2020 Mercy Fund grant monies will be awarded to support the immediate needs of the hungry within the four-county Diocese of Gary.

MC exploring use of scholarship funds for coronavirus relief

The City Council has scheduled a workshop for Tuesday to further discuss the proposal to take $750,000 out of the city’s Promise Scholarship account for COVID-19 relief.

It's a living, breathing bottleneck of livestock, choking the Midwest's meat industry.

Following stage three of Gov. Eric Holcomb's Back on Track Indiana plan, the Crown Point, Hammond, Griffith and Whiting locations are set to open May 24 — at a reduced capacity with social distancing measures in place.

The additional deaths brought totals to 136 in Lake County, 15 in Porter County, 14 in LaPorte County, nine in Newton County and one in Jasper County.

House Republicans agitated for a say in how Illinois reopens for business during the COVID-19 pandemic, urging majority Democrats to add it to the agenda of a long-delayed legislative session.

Government buildings will return to normal operations on May 26.

Although their focus on providing patient care has not changed, the way they must now go about performing their duties has significantly been altered.

More than half of residents, businesses don't expect a return to normal until 2021, Region survey shows

The survey, conducted by the United Way of Porter County, gives a glimpse into the mindset of Regionites as the state begins to reopen its economy.

There has been a spike in opioid overdose deaths in an Illinois county in recent weeks and it could be because of increased isolation due to the coronavirus pandemic, a coroner said.

Minors locked in cells 23 hours a day amid pandemic

Illinois State Police officers watch protesters during a rally calling for the state to reopen the economy, Saturday, May 16, outside the Thompson Center in downtown Chicago.

A protester shouts during a rally calling for the state to reopen the economy outside the Thompson Center in downtown Chicago, Saturday.

A protester holds a sign during a rally calling for the state to reopen the economy, Saturday, outside the Thompson Center in downtown Chicago.

Protesters hold up signs during a rally calling for the state to reopen the economy, Saturday, outside the Thompson Center in downtown Chicago.