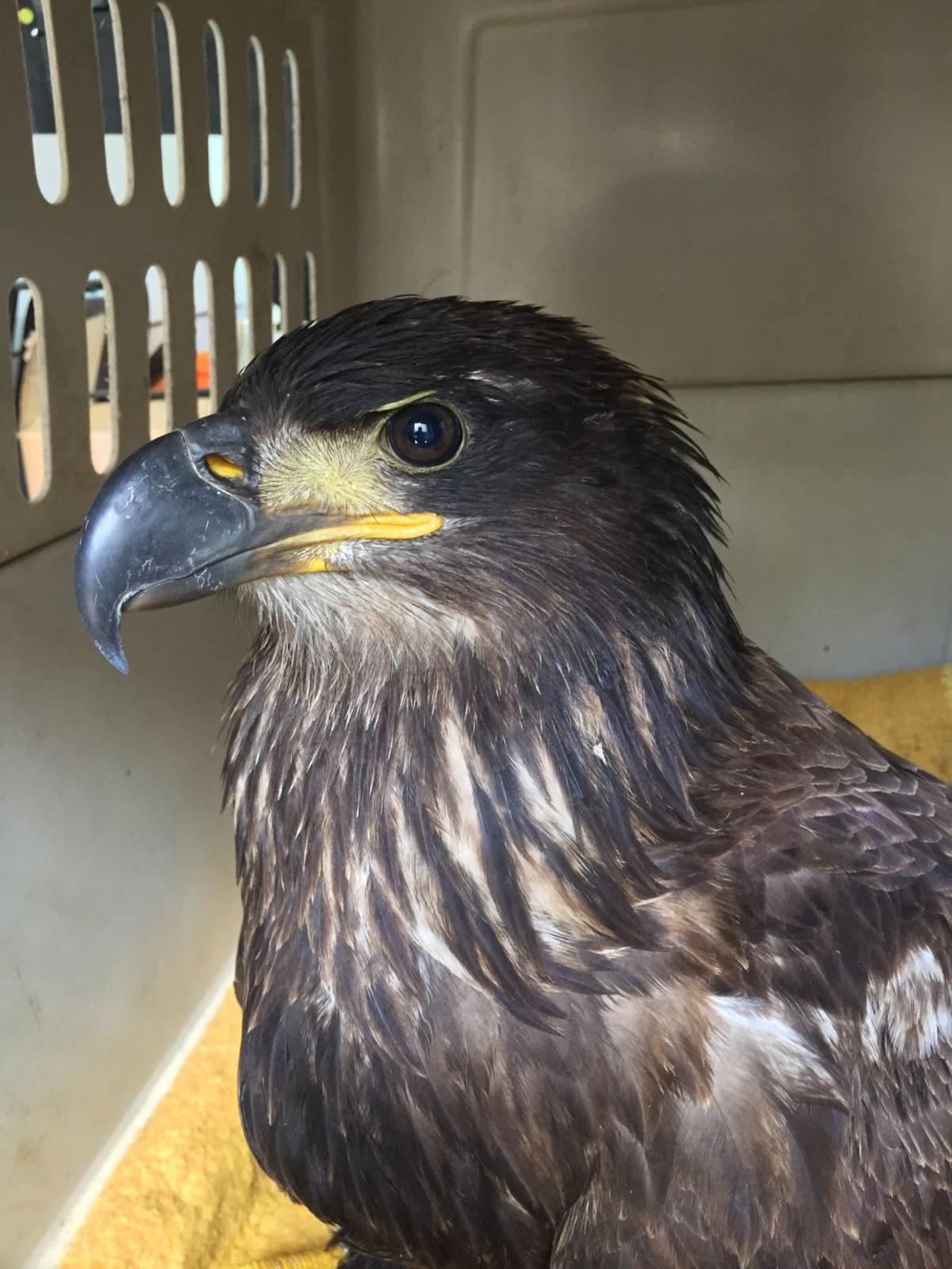 Humane Indiana Wildlife Center Director Steve Lakatos snapped a photo of the injured young male bald eagle after he was placed in a pet carrier. 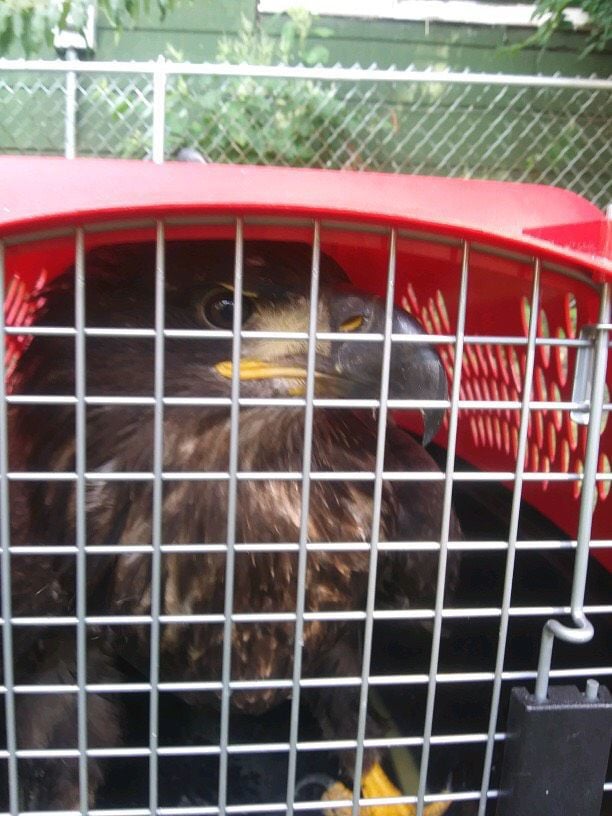 Hammond resident Philip Baker lured the eagle into a cat carrier and called wildlife agencies to pick the injured bird up for treatment and care. 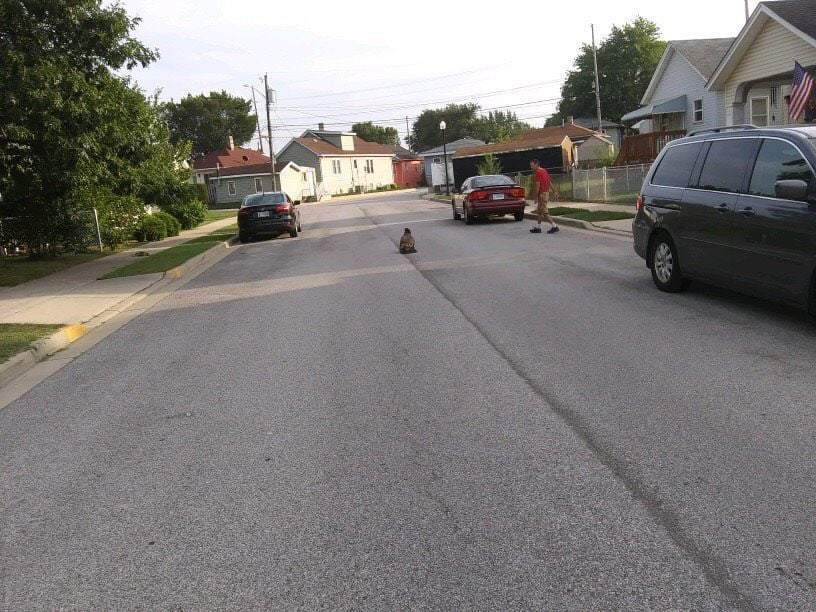 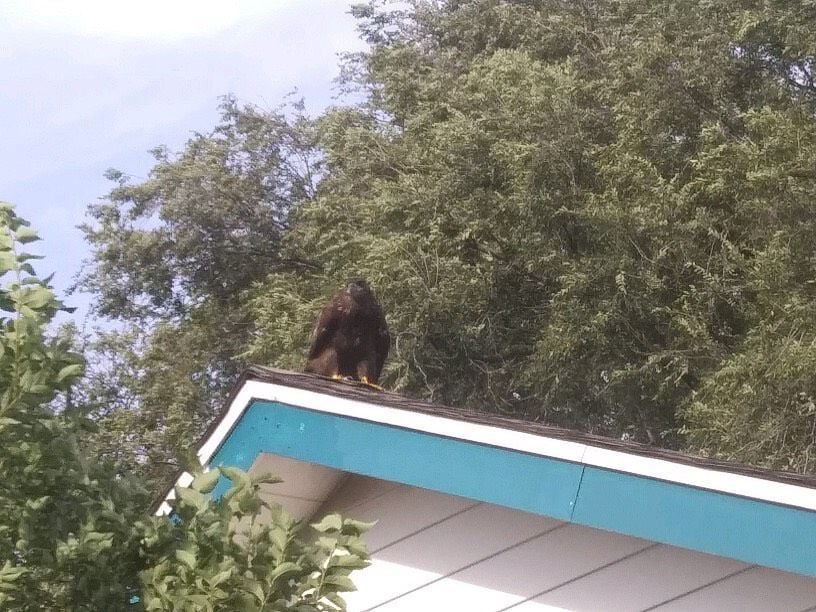 HAMMOND — An injured young bald eagle was finally captured after leading neighbors and a wildlife rehabilitator on a three-day chase through a Hammond neighborhood.

On Wednesday morning the eagle, a male believed to be only 1 to 2 years old, was picked up by Humane Indiana Wildlife Center Director Steve Lakatos. The eagle was then taken to an animal hospital where veterinarians are examining him for injuries or ailments.

“Finding him on 9/11 was kind of interesting, we were actually just talking about that,” Lakatos said.

Lakatos was first called about the feathered wanderer on Monday when a Hammond resident spotted him in a yard near the Grand Calumet River.

“Right now we don't know what's wrong, but we suspect a wing injury,” Lakatos said. “We know he can't fly well. Getting from garage roof to garage roof was the best he could do.”

The young fowl is mainly brown and has not yet developed a white head and tail. Bald eagles don't typically grow a full head or tail of white feathers until they are 5 years old.

Neighbors reported seeing the bird meandering in the alley between Molesberger Place and Tell Avenue in Hammond. Lakatos went to the area to catch the bird, but he fled and evaded capture. On Tuesday, residents reported seeing it hopping in the street.

When Lakatos tried to once again capture the eagle the next day, it hopped onto a fallen tree overhanging the river and Lakatos couldn't reach him. Concerned neighbors kept watch for the eagle, and eventually Hammond resident Philip Baker was able to corral him into a cat carrier.

Baker said he saw the eagle on his neighbor's roof and watched it slide off the house onto the ground. He said he could tell something was wrong with it.

“I think he came from the river and worked his way up the street,” Baker said. “It looked like he was heading toward Michigan (Street), which is pretty busy. We couldn't have the poor bird running into traffic.”

Baker, who lives on Molesberger Place, said the area around the Grand Calumet River has grown more diverse with wildlife in recent years.

Lakatos said he is aware of a nesting pair of bald eagles who have lived in that area of Hammond for the past few years and speculates this eagle could be their juvenile son. He said bald eagle populations in the Region have risen a lot in the past five years.

“I can say if you go back five or 10 years, it would be very rare to get an eagle in a Northwest Indiana rehabilitation center, but now we see one to two a year,” Lakatos said. “They are nesting mainly in Valparaiso and along the Grand Calumet River. They are establishing nests here far more so than you would have seen a decade ago.”

Pollution, habitat destruction, illegal hunting and pesticide contamination caused bald eagles to be listed as an endangered species in 1940, according to the U.S. Fish and Wildlife Service.

Due to the Endangered Species Act, wildlife organizations' efforts and the ban of the use of synthetic pesticide DDT, bald eagle populations have thrived, prompting them to be removed from the threatened and endangered species list in August 2007.

The eagle has landed

Once Baker caught the eagle and called some local wildlife agencies, Lakatos was alerted and came equipped with beak-proof handling gloves to collect him.

“He did not want to be handled by me,” Lakatos said. “He was strong and biting at my gloves. He was definitely not happy with me.”

While the eagle's future is yet to be determined, the wildlife center will care for him as he embarks on a path to recovery.

Pets of the week: Meet JuneBug

NEW YORK — People who were too young on 9/11 to even remember their lost loved ones, and others for whom the grief is still raw, paid tribute …

CROWN POINT — While surveying the grounds of the Historic Maplewood Cemetery last week, manager Tom Hawes came across the vandalized statue of…

UPDATE: 'It's not a joke': Parents line up outside Hammond High to retrieve students following district-wide lockdown

"I don't know if it was a kid that was trying to make something bad on this day, 9/11, or trying to joke about it," said Virdiana Saldana, a m…

Humane Indiana Wildlife Center Director Steve Lakatos snapped a photo of the injured young male bald eagle after he was placed in a pet carrier.

Hammond resident Philip Baker lured the eagle into a cat carrier and called wildlife agencies to pick the injured bird up for treatment and care.