Chuck Swirsky has met hundreds of professional sports superstars over the course of his career behind a microphone.

If a sports fan on the street randomly named a player, any player, Swirsky likely knows him or her too. He probably also knows something about their personal life.

“It’s not that I hang with these NBA players on the road. I’m old enough, 68, to be their dad. But there’s a trust factor between us,” Swirsky told me inside The Times office in Valparaiso.

He knows something about practically every pro athlete, active or former.

“Give me a player’s name, any name in sports,” he said.

I blurted out, “Bill Buckner,” the former Chicago Cub first baseman who I’ve always admired as a true sports professional.

“OK, Bill Buckner,” Swirsky said, pausing for a second to go through his mental Rolodex of pro athletes. “Dodgers, played for Tommy Lasorda, gets traded to the Cubs, goes from the Cubs to the Red Sox for Dennis Eckersley, ball goes through his legs in Game 6 of the ’86 World Series. Vin Scully with the great call.”

“People think that game ended the Series,” he said. “But the truth of the matter is they had a seventh game, the Red Sox were up 3-0 against the Mets, and they lost. But to Buckner’s credit, he held himself accountable afterward.”

At that moment, I realized that Swirsky could have elaborated in similar fashion about any player I blurted out, in any sport, from any era. And he could do it in his trademark Chuck Swirsky voice that fits on any microphone like a basketball net on a rim.

We met on Saturday, an off day for Chicago Bulls games. Swirsky is the team’s play-by-play radio broadcaster alongside color commentator Bill Wennington on the Bulls Radio Network, 670 The Score. In January, Swirsky will call his 2,000th NBA game on radio.

“I can’t believe it myself,” he told me. “But I knew I wanted to be a sportscaster since I was 5. I was destined to do this.”

Swirsky instantly went into his radio voice cadence, something he’s done thousands of times for hundreds of thousands of fans.

For that two seconds, I immediately imagined what he was seeing on the court.

“That’s my job. I call the game,” Swirsky said. “This is what broadcasting is all about — connecting with fans. I want a relationship with our listening audience, whether it’s 10 fans or 200,000. I’ve got to paint that picture. This is the beauty of radio.”

He paints picture after picture in his first-ever book, “Always a Pleasure,” an insightful memoir of his colorful career in the sports world. (Eckhartz Press, 165 pages, $20. Purchase copies at eckhartzpress.com/shop/always-a-pleasure/.)

“It’s all in there,” Swirsky told me. “From my beginnings in this industry to everyone I met along the way.”

When Swirsky arrived in Chicago, he got turned around trying to find his hotel. Cops were everywhere, blocking off streets including Lower Wacker Drive. He pulled up to one cop to ask for directions.

Swirsky eventually learned his way around the Windy City.

On his first radio broadcast for WCFL, Swirsky told listeners the call-in number hundreds of times. Only two calls came in. One was the wrong number, but Swirsky kept the caller on the line for 20 minutes anyway. The other caller misdialed trying to order a pizza. Swirsky talked to the guy about deep-dish deliciousness.

In 1980, he received an offer from WLUP, “The Loop,” featuring the high-energy, on-air personalities Steve Dahl and Garry Meier. The dynamic duo at the time didn’t want Swirsky invading their space and show. Swirsky knew it from Day 1.

“I kept my head down and continued to report and cover Chicago sports,” he wrote in his book.

He has since done this with a passionate mastery of his craft.

“Always a Pleasure” shares back-cover testimonials from NBA superstar Stephen Curry, who he’s known since he started draining three-pointers as a kid: “Chuck’s unique desire to mentor young people, especially minorities and those of different cultures and backgrounds, will help inspire those who share the same dreams.”

And from two-time NBA champion Chris Bosh, who wrote, “Thanks to your kids for always keeping those cookies around. Those were no joke.”

Swirsky has personal relationships with countless players, coaches, and sports world executives. He’s been inducted into the Chicagoland Sports Hall of Fame and the WGN Radio Walk of Fame. He’s marking 25 years as a NBA radio sportscaster, with each season dictating his daily schedule from October to whenever the Bulls season ends.

“I love basketball, but as a kid I was a huge Bobby Orr fan,” he said, referring to the former Boston Bruins hockey superstar. “He revolutionized the game. Later in his life, I got to meet Bobby.”

Of course he did. Swirsky’s book includes a list of who he calls the best of the best.

His pregame broadcast ritual: A prayer of thanksgiving and gratitude along with listening to Elton John’s “I’m Still Standing.”

At one point during our chat, Swirsky shared a poignant story about his late parents. It’s beautiful. It’s sad. It’s a part of him that most people likely don’t know. I felt honored that he shared it with me, and I’ll share it in a future column.

How did he find Valparaiso as a home? Another story. His wife, Ann, a Texas native, fell in love with the city two years ago, so the couple moved there in February.

“Whether it’s Strack & Van Til or the Abbey Restaurant, everyone is so friendly,” Swirsky said. “What’s not to like here?” 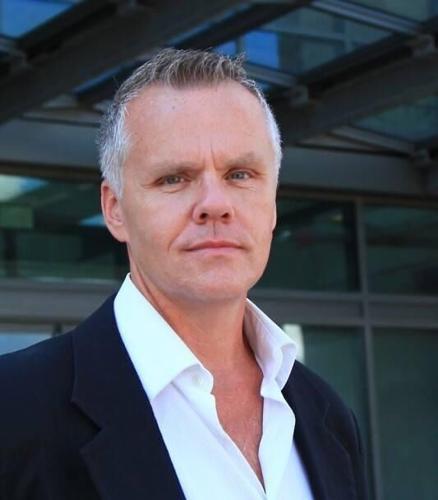 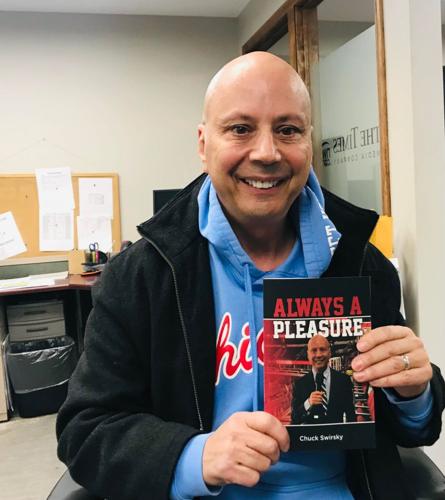 Chuck Swirsky, the Chicago Bulls radio broadcaster, has written his first book, "Always A Pleasure," a full-court press of memories, optimism and amazing stories about his life in the sports world. 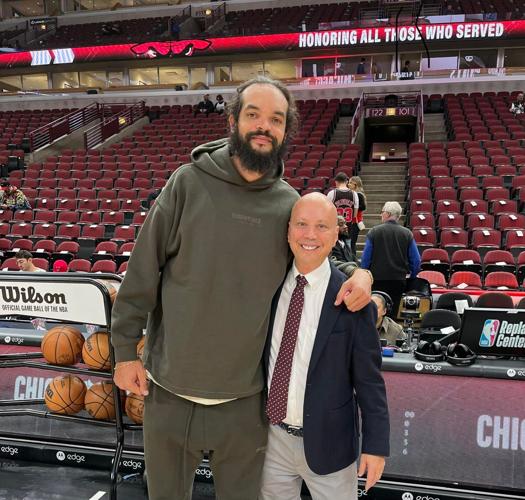 Chuck Swirsky, radio voice of the Chicago Bulls, with one of his favorite all-time players, and person, Joakim Noah. 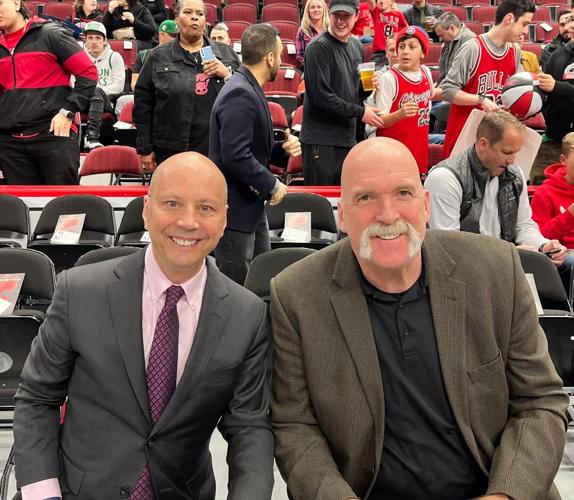 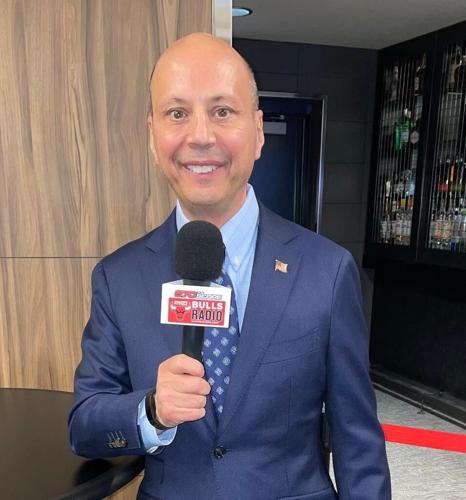 Chuck Swirsky began his professional broadcasting career in 1976. He's spent the past 25 years calling NBA games for the Chicago Bulls and Toronto Raptors. 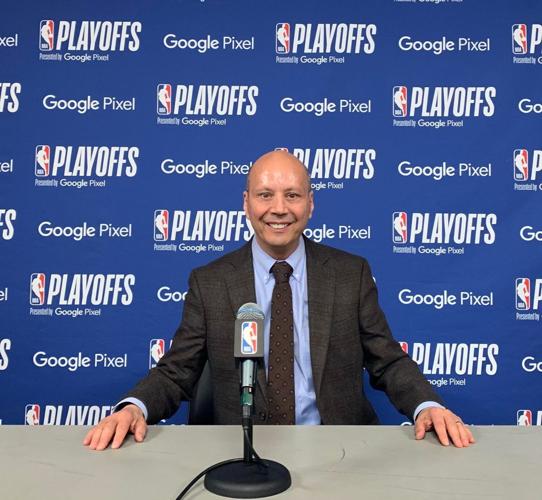 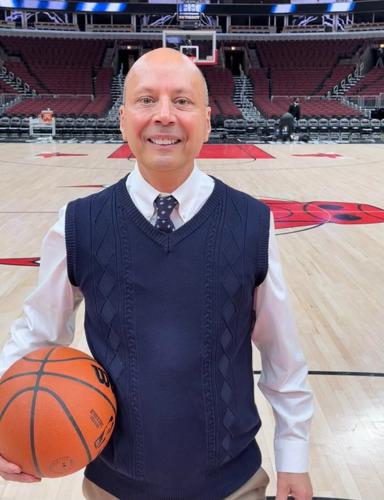 Chuck Swirsky lives in Valparaiso, thanks to his wife, Ann, who chose Northwest Indiana for their home two years ago. "What's not to like?" he asks.