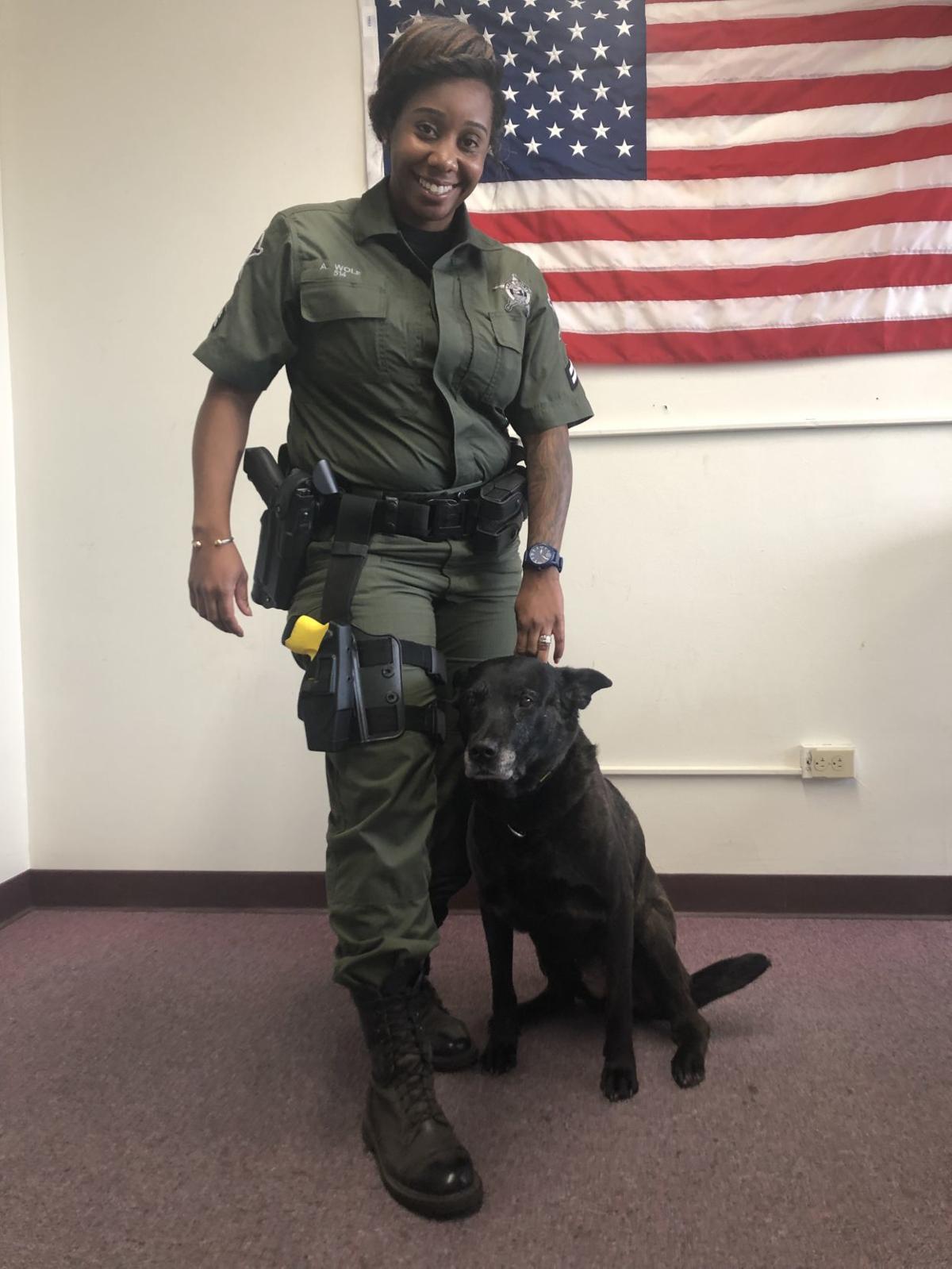 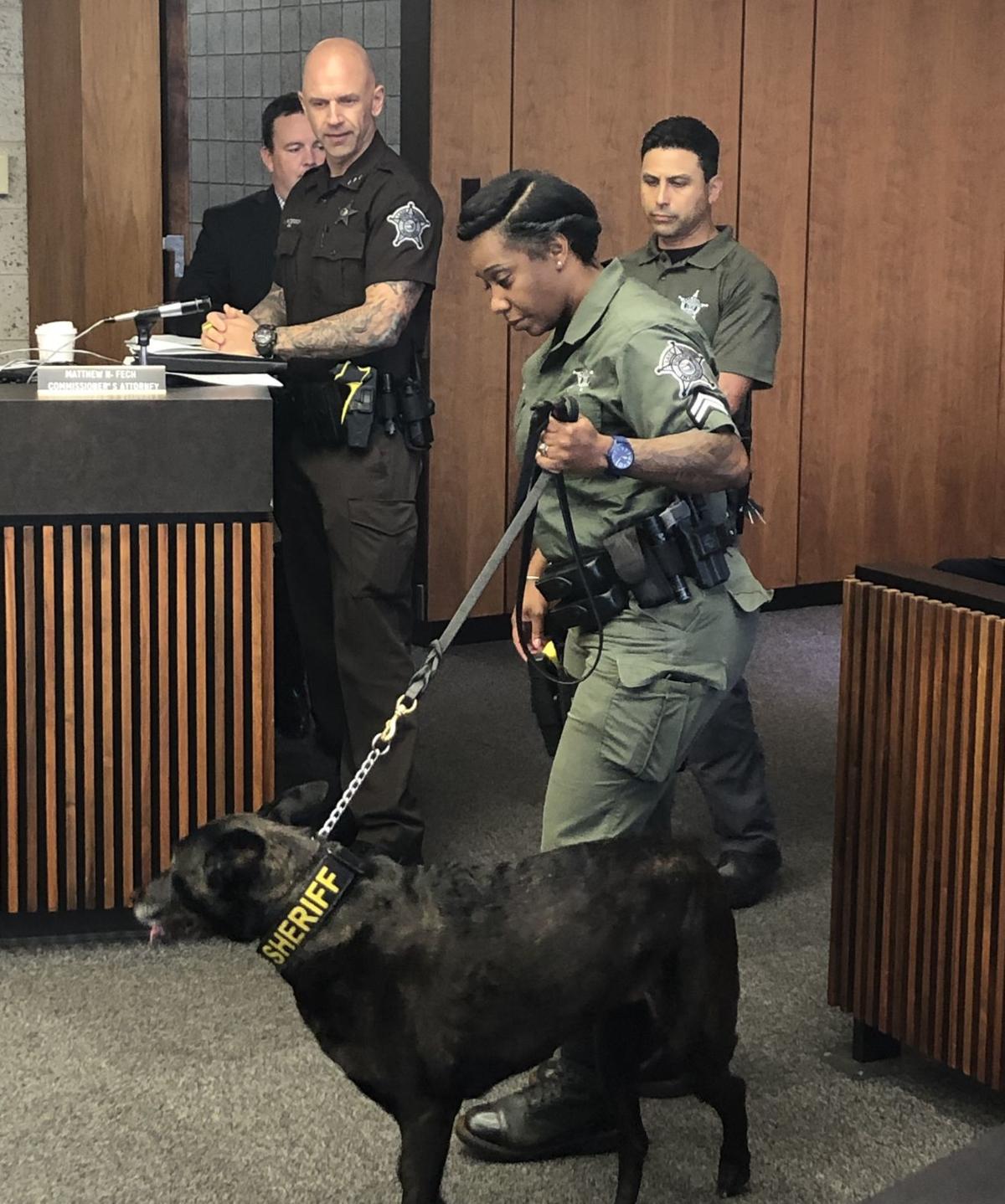 CROWN POINT — Sasja the police K-9 is trading a life of chasing bad guys for being chased by toddlers as the family dog of her longtime handler, Lake County Sheriff's Department Cpl. Amber Wolf.

After more than a decade as a police and military working dog, the 13-year-old German-Dutch shepherd mix will now live out a life of full-time leisure at Wolf’s home in Crown Point.

Sasja’s adoption was made official Wednesday at a county commissioners’ meeting. There, Sheriff’s Department leadership formally transferred ownership to Wolf, who has handled Sasja since 2009.

While Sasja’s days of sniffing out narcotics, tracking fugitives and searching for missing persons may be over, retired life won’t be too much of a change for her, Wolf said.

That’s because for the past 10 years, Wolf has taken Sasja home at the end of each shift. The Sheriff’s Department doesn’t maintain kennels, so its police dogs live with their handlers just like a regular family pet.

“As far as her retirement, Sasja has been pampered her whole life, so it’s just a transition of her not having to wake up to go to work,” Wolf said. “I’m definitely going to give her the best retirement life there is, because she deserves it.”

The close connection between Wolf and Sasja is easy for even strangers to see.

Sasja hangs on Wolf’s every word, attentive to the next command to sit, stay or come. When not in “working mode,” Sasja finds a place at Wolf’s side, where she lies waiting patiently for the next cue — or treat — from her handler.

It wasn’t so when the pair first met at Vohne Liche Kennels in Denver, Indiana, Wolf recalls. When Wolf first laid eyes on Sasha, she didn’t think the dog, who had just come back from a deployment to Iraq with the U.S. military, liked her all that much.

“It’s kind of funny, because when we first met, we kind of just looked at each other,” Wolf said. “It wasn’t that instant bond.”

But that changed in the first week of the K-9 training program, when officers take their dogs home for an acclimation period. In short order, Sasja adjusted to life as Wolf’s companion at work and at home.

“Within that week, I realized there was something special among us,” Wolf said. “She started realizing that it was something new, but within the days we were together it was like something clicked — like somebody turned on a switch.”

The transition was even smoother because Sasja came to the Lake County Sheriff’s Department as a “dual-purpose” dog, already trained in both drug detection and tracking humans. Even though she was only 3 years old at the time, Sasja’s experience as a military dog allowed her to breeze through the five-week police K-9 training program, Wolf recalled.

“She was very obedient, very loyal, and didn't cause problems,” Wolf said.

Among the K-9 Unit’s six dogs, Sasja is exceptional in other ways. She has been able to perform the full complement K-9 duties at an age when most other police dogs long have since retired, Wolf said.

Sasja also defies the stereotype of a snarling police dog. Even strangers, as long as they aren’t a threat, can freely give her pets and belly rubs without so much as a growl in return.

“Sasja’s personality is just special within the unit. She’s the type of dog that, when it’s time to work, she knows it’s time to work,” Wolf said. “But after you take the collar off and she settles down, she’s the best family dog. She’s able to adapt to the circumstances.”

That easygoing attitude makes Sasja a popular member of the Lake County police force, especially among children. Wolf’s own young relatives are big fans, too.

“My niece and nephew, they love her to death. My nephew, who is 1, will pull her tail and she just gives him a look like, ‘OK,’” Wolf said. “Throughout her years interacting with members of the community, everyone loves Sasja. She’s just such a patient dog.”

Life after the K-9 unit

Like Sasja, Wolf is also at a transition point in her police career.

A Gary native, Wolf has been with the Sheriff’s Department for 13 years, 10 of them in the K-9 Unit. With her four-legged partner now retired, she said she’s ready for a new assignment within the department.

“As far as working another dog, I feel like the bond I’ve acquired with Sasja over the years, I want to keep it at that,” Wolf said. “With the type of relationship we’ve had, not only would it hurt her seeing me with another dog, I just don’t think my mindset would be there to go through that.”

For the past year, Wolf and Sasja have been supporting the department’s High Crime Unit, a team of detectives that investigates gang members, drug traffickers and violent offenders in the area. The experience has been a “spark to re-energize” her passion for police work, Wolf said, and she hopes to stay on with the group.

As for Sasja, she will enter a well-deserved retirement after what was probably the most eventful year in her career as Wolf’s partner.

In July, the pair were featured on an episode of "First Responders Live," a FOX show that documents the police and fire departments as they handle high-stress calls. Film crews have been embedded with Lake County police officers this year, giving viewers a window into the exploits of some of the department’s faster-paced units.

At the same time, Sasja was fighting cancer of the mammary glands, which threatened to cut short her life, to say nothing of her police service. After five surgeries since June, Sasja is now cancer-free.

“That was a blessing for me not to have to go through something that traumatic and retire my dog at the same time,” Wolf said, describing the past few months of Sasja’s police service as “an emotional roller coaster.”

Looking back on their time as partners, Wolf said the most meaningful moments she shared with Sasja had little to do with drug busts or arrests. Instead, the trust built over countless hours together in the patrol car, and the occasional shared snack of chicken nuggets, will stick with her the most.

“The consistency and loyalty she’s provided — when she was needed, she was there for me," Wolf said.

A national spotlight will shine this summer on the Lake County Sheriff's Department when it appears in a new live show, similar to "Cops," tha…

Protecting K9 Heroes honored K-9s and their handlers recently for "their service to their community and dedication to their departments," acco…

'I feel like part of me is missing,' handler remembers Dyer K-9 Igar