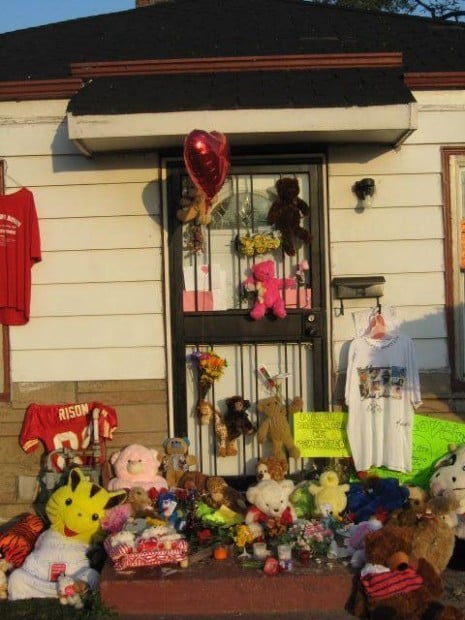 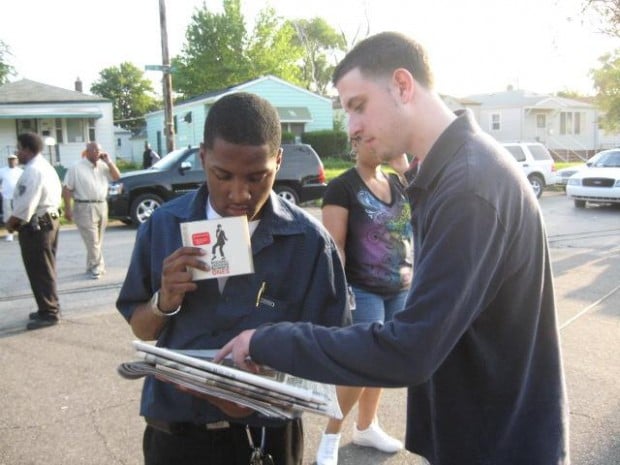 Memorials adorn the entryway to Micahel Jackson's childhood home at 23rd and Jackson in Gary Friday morning, the day after the King of Pop's death. 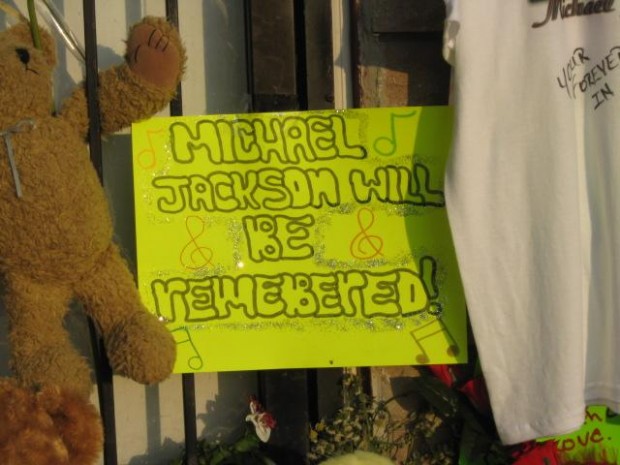 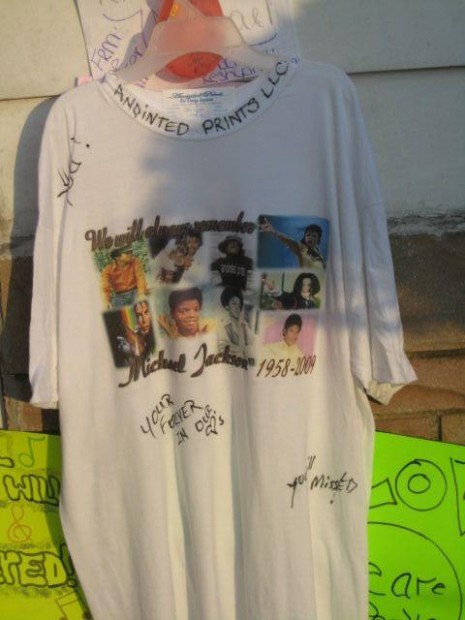 GARY | The street where Michael Jackson once played as a boy was jammed with television news trucks, police cars, fans and curious onlookers Friday morning remembering the life of the King of Pop.

About 20 people stood on the sidewalks and in the street next to the tiny, white house on the corner of 23rd and Jackson just behind the Roosevelt High School football field.

MORE: Follow our coverage on the death of Michael Jackson.

Overnight, fans left memorials on the small, cement stoop of the home. Teddy bears, a heart-shaped balloon, McDonald's coupons and cards sat on the stoop early Friday morning beneath t-shirts hanging from the window panes.

Gary Mayor Rudy Clay stood outside of the home dressed in his signature three-piece, dark suit talking to residents and reporters.

"People have been out all night," Clay said. "It's been a pouring out of love for Michael Jackson."

"He had a pure, magnetic love for people and for Gary," the mayor said, adding that the deed to the home is still listed in Jackson's name.

Clay said that short of a burial, he hopes Jackson's body can at least lie in repose at City Hall. The mayor said he'll push for that but hasn't broached the possibility with Jackson's family.

Beside Clay was 82-year-old Mabel Moore, using an orange broomstick for a cane. Moore has lived across the street from the Jackson family home for 41 years.

"I know them well," she said of the Jackson family.

Jackson left Gary as a young child and that's how Moore remembers him and his siblings.

"They were normal kids," she said. "They were raised up with my kids. Everybody in this neighborhood called me Mama, including Michael."

"I couldn't believe it. I was devastated."

Moore said she will remember the little boy who played with her children on the street where she stood mourning his passing as, "a hard-working young man trying to be somebody."

Isaac Preston Jr. has lived in Gary since 1962 and said he followed the careers of the Jacksons. Preston, who is an elder with Miracle Temple Church of God in Christ in Gary, said he hopes Jackson's legacy is more than the allegations of child molestation that surrounded him in life.

"He was never found guilty of anything," Preston said. "We are not to be judgmental. God has the final say in everyone's life. I'm certainly praying for the family and the nation. Gary gets a bad rap but you can see how much the people here loved him and how when something bad happens, we come out to support each other."

Bobby Knight, 18, of Gary's Miller neighborhood came to Jackson's home right after getting off of working the midnight shift at McDonald's. Knight stood with a stack of the day's newspapers in his arms with headlines announcing the King of Pop's death.

"I blasted his music all the way here," Knight said. "I just wanted to come and remember a genius from his humble beginnings."

Knight admits he is too young to remember Jackson's greatest hits when they hit the charts, but said his mom was "a fanatic" and got him hooked.

"I was on Facebook and a friend instant messaged me that he was dead," Knight said. "I just thought it wasn't possible."

"We did YouTube before we left home and watched the old videos," Farrell said.

Billy Farrell said he honestly didn't remember all of Jackson's hits and wasn't a huge fan, but wanted to come to his home.

"I kind of want to be a part of history," Farrell said. "I just kind of wanted to be here."

- The Associated Press contributed to this report.

Memorials adorn the entryway to Micahel Jackson's childhood home at 23rd and Jackson in Gary Friday morning, the day after the King of Pop's death.

Bobby Knight, 18, of Gary (left) and Billy Farrell, 23, of Chicago look at newspapers announcing the death of Michael Jackson in front of Jackson's childhood home in Gary Friday.
© Copyright 2021 NWI Times, 601 W. 45th Ave. Munster, IN | Terms of Use | Privacy Policy
Powered by BLOX Content Management System from TownNews.com.
You don't have any notifications.