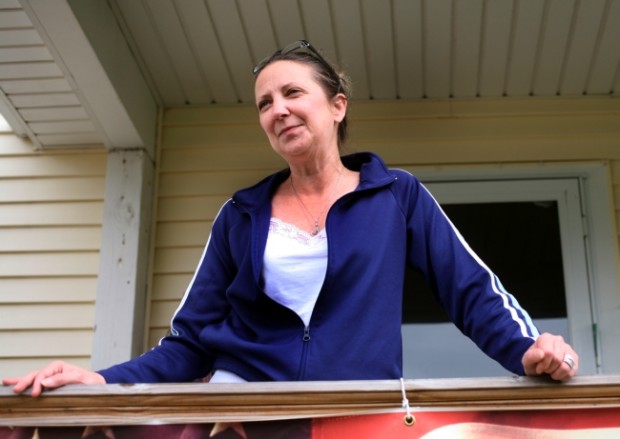 NATALIE BATTAGLIA | THE TIMES Kim Greenberg talks about how online memorial pages have helped her and her family with the loss of her son, Army Spc. Nick Idalski. 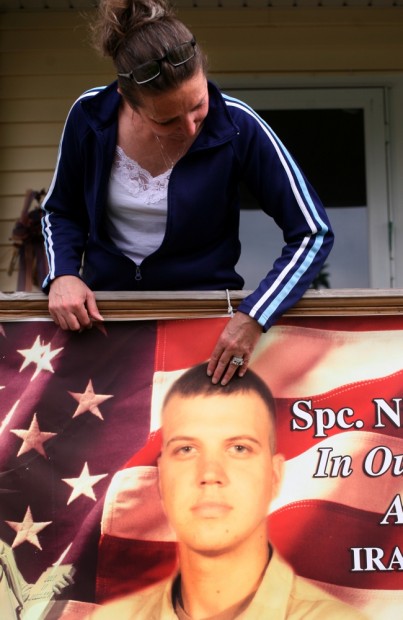 NATALIE BATTAGLIA | THE TIMES Kim Greenberg stands by the poster honoring her son, Army Spc. Nick Idalski, at her Crown Point house. Idalski was killed in Iraq four years ago, but his mother still sends him messages online at Legacy.com. "It's helpful when you have a Legacy.com or guest books," she said. "I get to see glimpses of Nick's life I didn't know about, his friends, people we don't know that he impacted other than ourselves."
Lauri Harvey Keagle - , (219) 852-4311

It's not unusual in this dot-com era for parents to use the Web to feel closer to their kids. The difference is Greenberg's son, U.S. Army Spc. Nick Idalski, was killed in Iraq four years ago.

"It's helpful when you have a Legacy.com or guest books," the Crown Point woman said. "I get to see glimpses of Nick's life I didn't know about, his friends, people we don't know that he impacted other than ourselves. It's not always easy to read them but it's good."

The statistics show Greenberg is not alone in seeking comfort for her grief online. Legacy.com, headquartered in Evanston, gets more than 14 million unique visitors per month and is among the top 100 trafficked Web sites in the world.

The site, which posts obituaries and guest books for more than 70 percent of the people who die in the U.S., partners with more than 750 newspapers in North America, Europe and Australia to post obituaries, memorial pages and virtual guest books where visitors can leave messages for family members and other mourners.

The company launched Legacy Connect in 2008 as a social networking component to the site, where users can create their own pages and groups for support.

"The site provides something that didn't exist in the real world and that's the ability to be anonymous and the ability to talk to people at any hour of the day," said Hayes Ferguson, chief operating officer for Legacy.com. "People say, 'It's 3 a.m. and I can't sleep and I knew you'd be here.'"

Jim Burns, president of Burns Funeral Home and Crematorium in Crown Point and Hobart, said funerals, too, have changed dramatically in the 101 years his family has run the business.

Burns said some families now choose to upload all of the deceased's favorite songs onto iPods and play them during visitation or a part of the funeral service. Caskets can be emblazoned with any logo imaginable to show the deceased's interests.

"You don't want people to dwell on those things, but we want them to know they are available," Burns said. "The bottom line is there is no right way or wrong way to grieve and technology has enhanced the options for people."

'It makes a huge difference'

Greenberg said she saw how technology has changed the way society deals with death when she lost her son.

"Once the news got out, the kids were text messaging and e-mailing each other," she said. "(The day after he died), the yard was filled. We had kids camping in the yard waiting for Nick to come home. People knew right away. It was helpful."

Idalski's service was handled by Burns Funeral Home, which offered to hire a company to videotape and photograph the funeral. Greenberg chose to do both. The photos are in a bound book much like a wedding album with photos of her son in his casket, tearful friends and family members and somber local officials paying their respects.

"There's a lot of nights that you're awake and I've downloaded the video onto my computer and I watch it," Greenberg said.

She has turned to other Web sites for families of fallen soldiers for support as well and developed an online friendship with the parents of two other soldiers killed in Iraq on the same day.

"It's so much easier to e-mail," she said. "Computers, the Internet, it makes a huge difference. Writing letters and making phone calls, that ends but the e-mails, those don't."

The online memorial pages, she said, have created a support system from around the world.

"I have a cedar chest filled with cards, letters, people I don't even know as far away as Finland," she said. "It's an absolute blessing to know that prayers are out there, prayers from people I know, people I don't know."

Greenberg said she knows that not everyone will understand the way she grieves or agree with it.

"It's OK, everybody handles grief in their own way," she said. "There's no wrong way to deal with grief and there's no time limit. You can take as long as you need."

'Nothing can replace a hug'

James Nelson, associate professor of psychology at Valparaiso University, said online sites have their pros and cons when it comes to dealing with grief.

"A lot of social scientists question social networking sites in terms of the depth of the relationships because it's not face-to-face, it can be anonymous and the encounters are often quite brief," he said.

Burns said he thinks the Web sites enhance options for friends and loved ones, but they should not replace more traditional expressions of sympathy.

"There are online condolences, and I think that's great if people are out of town or can't attend (services), but I don't think it is acceptable as an alternative to attending a wake or funeral," Burns said. "Nothing can replace a hug. I think people have to be aware that their presence is so much more meaningful."

Nelson agreed, saying studies have shown the importance of physical touch during the mourning process, something you can't get from a Web site.

"These sites, they're not bad, but you have to be aware of the things they can't do," he said.

"Our culture doesn't deal well with death," Nelson said. "More social opportunities for people to be in touch with each other, I think, is a good thing. Maybe it'll even change the way we deal with death and dying. If that was to change, that would be a good thing."

Kim Greenberg, of Crown Point, writes messages to her late son, U.S. Army Spc. Nick Idalski, on the fallen soldier's Legacy.com In Remembrance page. Here are some of her posts:

I couldn't say another goodbye on the 21st. We did that at home all day, just talking about you and remembering and sharing with friends who came by to spend the time and the day with us in remembering you. You are always in my thoughts anyway but forever in my heart. So today I say Happy Birthday as you would now be 27 here at home, but will always be 23 in Heaven. I know when you are with me and I hear you in my heart, so have a Happy Birthday with all the other brave ones who are with you. Love you son

Memorial Day. I spend the week-end thinking of you constantly, watching the video, looking through the photo albums and the memorial album. I wish with all my heart you were here with us today. But you can only be with us in heart, so today I cry and offer respect and honor to you and all the fallen. You are always and forever in my heart. I miss you Nick and I always will, that will never change. Love and miss you.

Hey Nick - all is well. Both your brothers are married now and we are all trying to go on with life. I want to wish you a very special Merry Christmas. Nick, I miss your goofy competition to always get the "best" present. I miss the little whisper in my ear saying, "Hey Mom, I got you the best gift." Nick, you were my best gift, one that I cherish in my heart always.

NATALIE BATTAGLIA | THE TIMES Kim Greenberg talks about how online memorial pages have helped her and her family with the loss of her son, Army Spc. Nick Idalski.

NATALIE BATTAGLIA | THE TIMES Kim Greenberg stands by the poster honoring her son, Army Spc. Nick Idalski, at her Crown Point house. Idalski was killed in Iraq four years ago, but his mother still sends him messages online at Legacy.com. "It's helpful when you have a Legacy.com or guest books," she said. "I get to see glimpses of Nick's life I didn't know about, his friends, people we don't know that he impacted other than ourselves."
© Copyright 2021 NWI Times, 601 W. 45th Ave. Munster, IN | Terms of Use | Privacy Policy
Powered by BLOX Content Management System from TownNews.com.
You don't have any notifications.