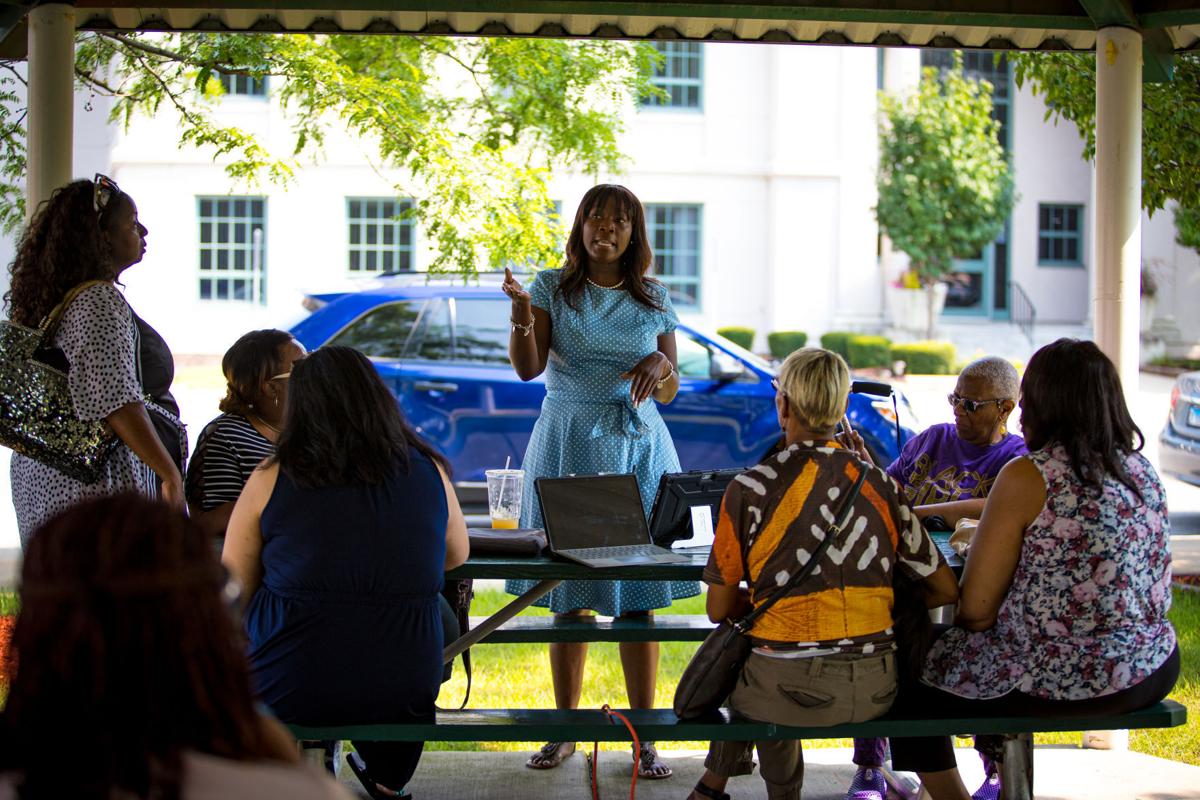 Calumet City Clerk Nyota Figgs, center, works under a pavilion Wednesday morning at Pulaski Park. Figgs, who has worked in the area across from City Hall in recent weeks, is at odds with Mayor Thaddeus Jones over the reassignment of clerk duties to the city administrator. 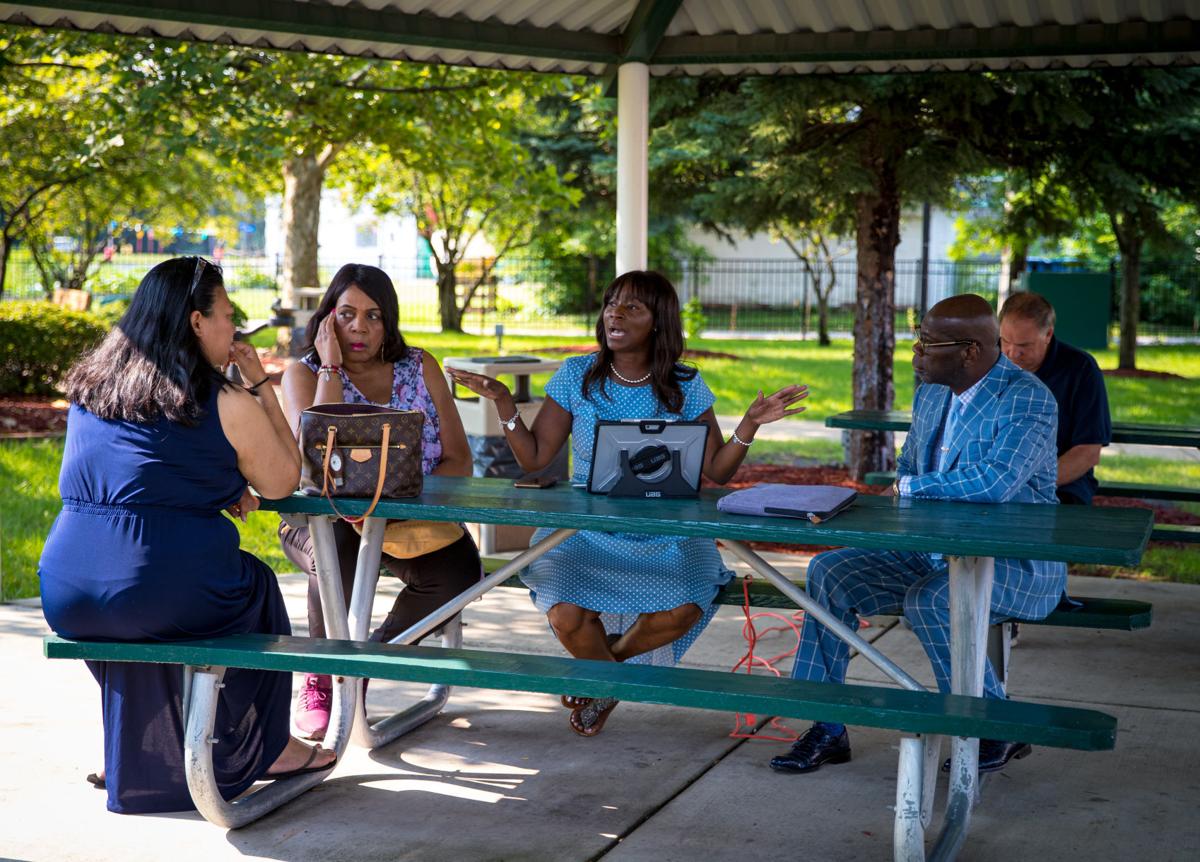 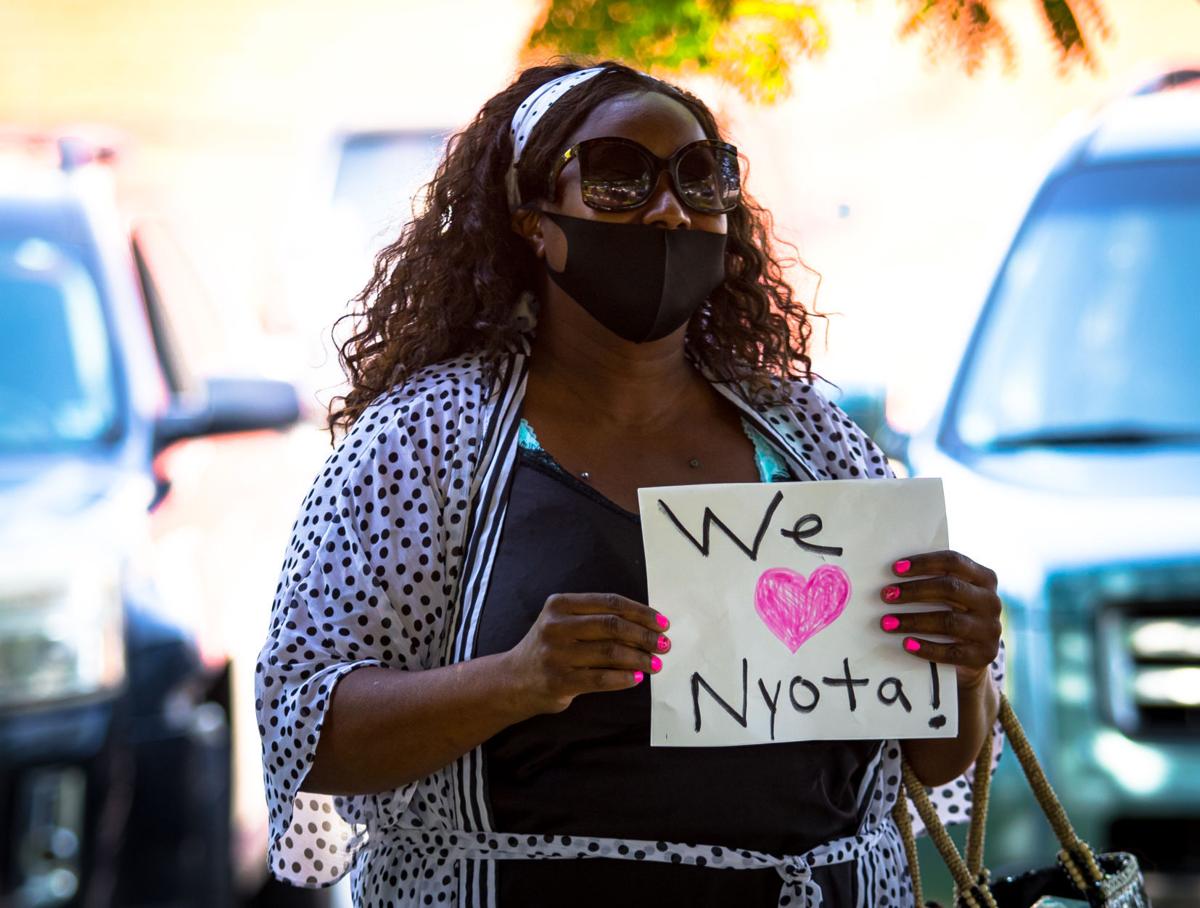 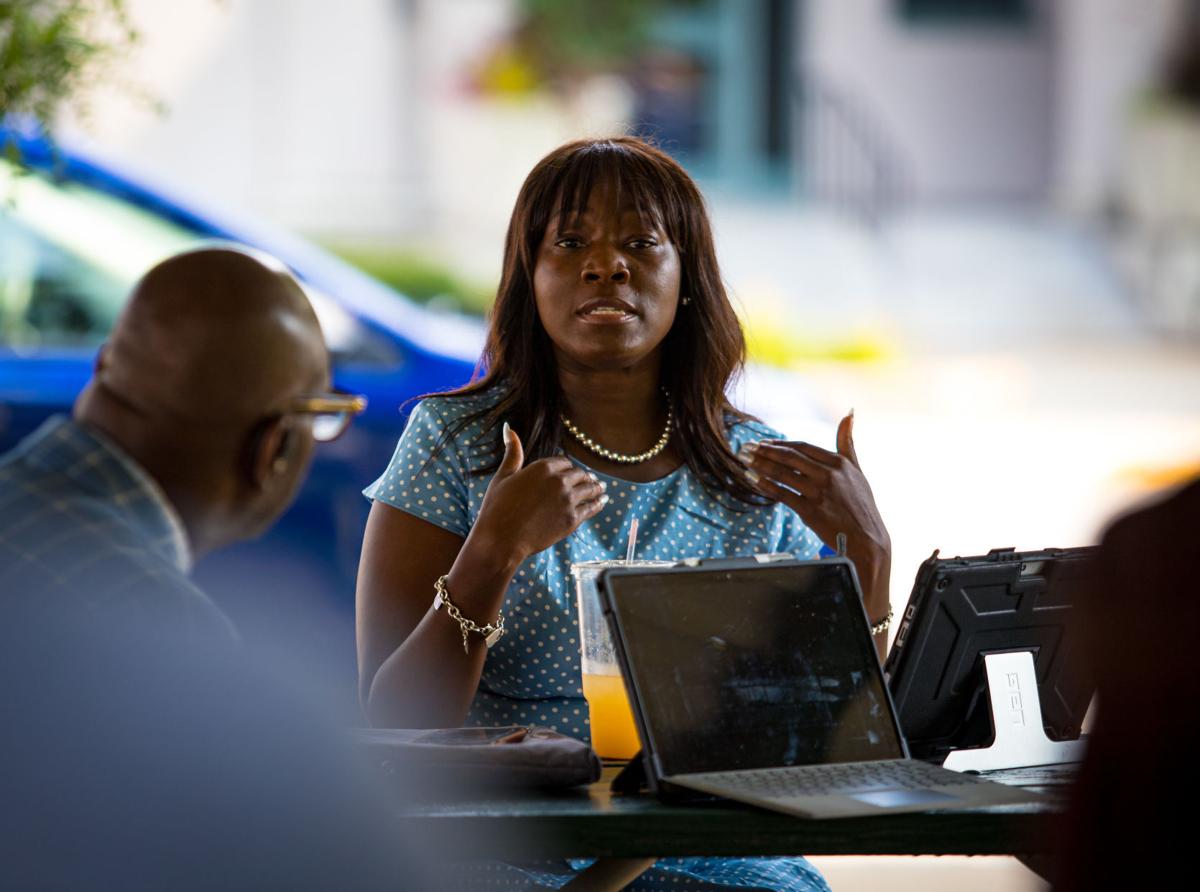 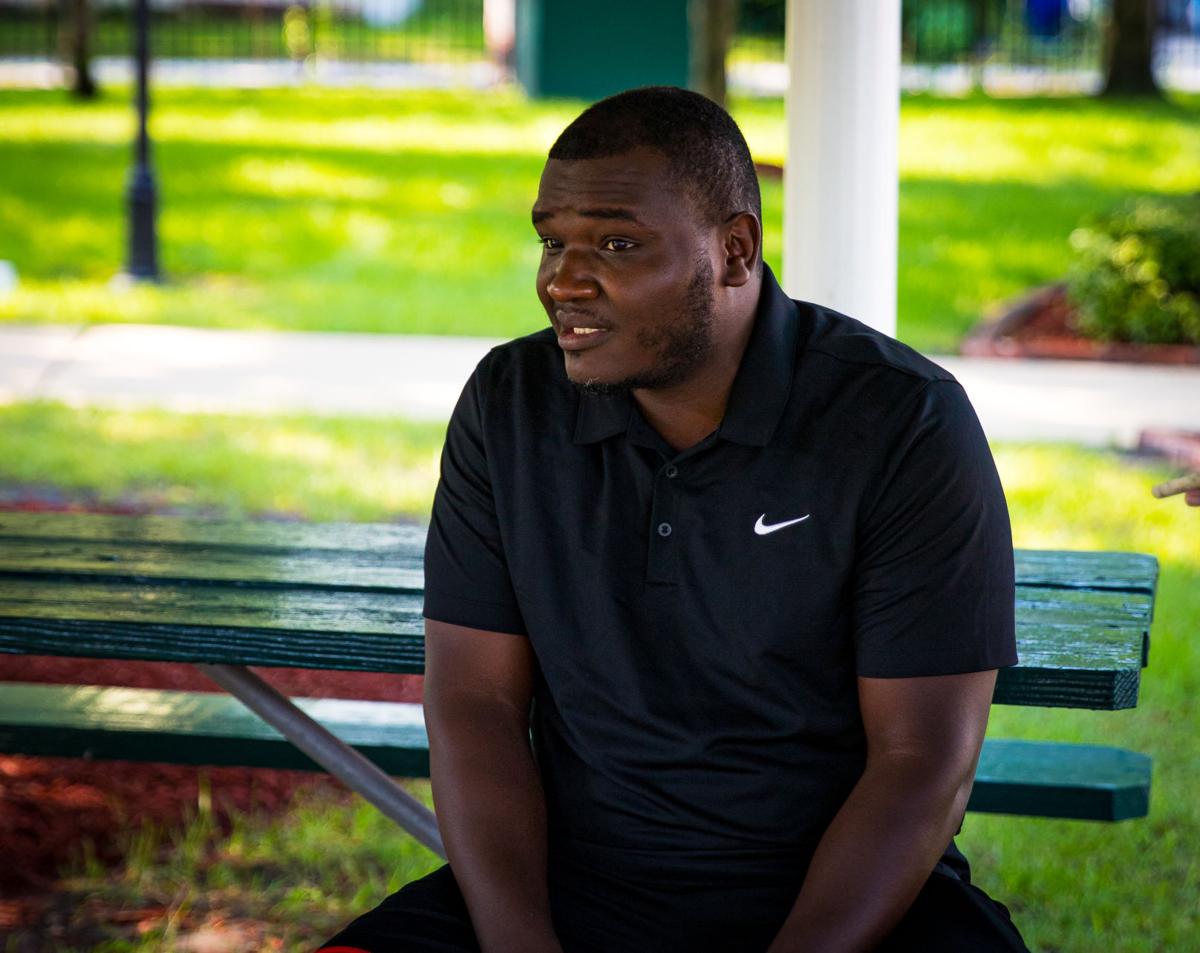 Michael Smith was one of several Calumet City residents who showed support for Clerk Nyota Figgs on Wednesday in Pulaski Park.

In a Wednesday morning rally and news conference across the street from City Hall at Pulaski Park, Figgs said, "I feel like I'm being bullied within the mayor's administration. ... I noticed that every time that I would operate in the capacity of my job ... and I would inform the mayor of policies and procedures or the state statute that relates to my job, I feel like there was some form of retaliation."

"It is unfortunate that Clerk Figgs has stoop(ed) to an enormously low level by disrespecting the hundreds of thousands of women in this country who are victimized through acts of realistic bullying. Clerk Figgs is not being bullied."

Jones added that Figgs "was stripped of her duties in 2012" during the previous administration of Mayor Michelle Markiewicz Qualkinbush.

Figgs, however, said the transfer of her duties to current City Administrator Deanne Jaffrey happened after Jones was sworn in on May 1. Figgs said duties now being handled by the city administrator include business licensing, animal licensing, vehicle licensing, the collection of city revenues and releasing City Council agendas to the media. Figgs added that three employees of the clerk's office no longer report to her.

"Basically, at this time, all I do is minutes (of the City Council meetings)," Figgs said.

Figgs said her work environment had become so intolerable that she has been unable to enter City Hall. As a result, she said she has been working at the Pulaski Park pavilion in recent weeks.

"It was so bad for me that I felt a physical reaction, going into the building," Figgs said.

She said that she previously had a good working relationship with Jones, including working on one of his early campaigns for state representative.

"He used my face (on campaign materials)," Figgs said. "He used my name as the city clerk and those other individuals (to show) how he supports black women. He used my presence, he used my popularity with the voters to get into office — then, to turn around and suppress me and my job duties in the same space."

"What they've done to her in the first three months that they've been in office, it's not right," Patton said. "I'd like to see the clerk given all of her responsibilities and duties back and given her staff back and be allowed to do her job."

Patton also has been at odds with Jones. Last month, he sent an open letter to Cook County State's Attorney Kim Foxx and Illinois Attorney General Kwame Raoul asking them to remove Jones as mayor because of a city ordinance that prohibits anyone from holding an elected office in Calumet City in addition to another one elsewhere. Jones, who represents the 29th District, has said an Illinois law signed recently by Gov. J.B. Pritzker supersedes the local ordinance and allows him to hold both positions.

Jones' statement alleged that Figgs has made mistakes that cost the city money, including "mismanagement of a federally funded program concerning parking tickets."

Jones said his administration "will soon release the findings from a forensic audit that will detail multiple errors within the office of the Clerk."

Figgs said the pandemic paused the collection of significant amounts of revenue owed to the city. Asked if she expected the audit to reveal improper actions by the clerk’s office, she answered, “Absolutely not.”

Calumet City Clerk Nyota Figgs, center, works under a pavilion Wednesday morning at Pulaski Park. Figgs, who has worked in the area across from City Hall in recent weeks, is at odds with Mayor Thaddeus Jones over the reassignment of clerk duties to the city administrator.

Michael Smith was one of several Calumet City residents who showed support for Clerk Nyota Figgs on Wednesday in Pulaski Park.