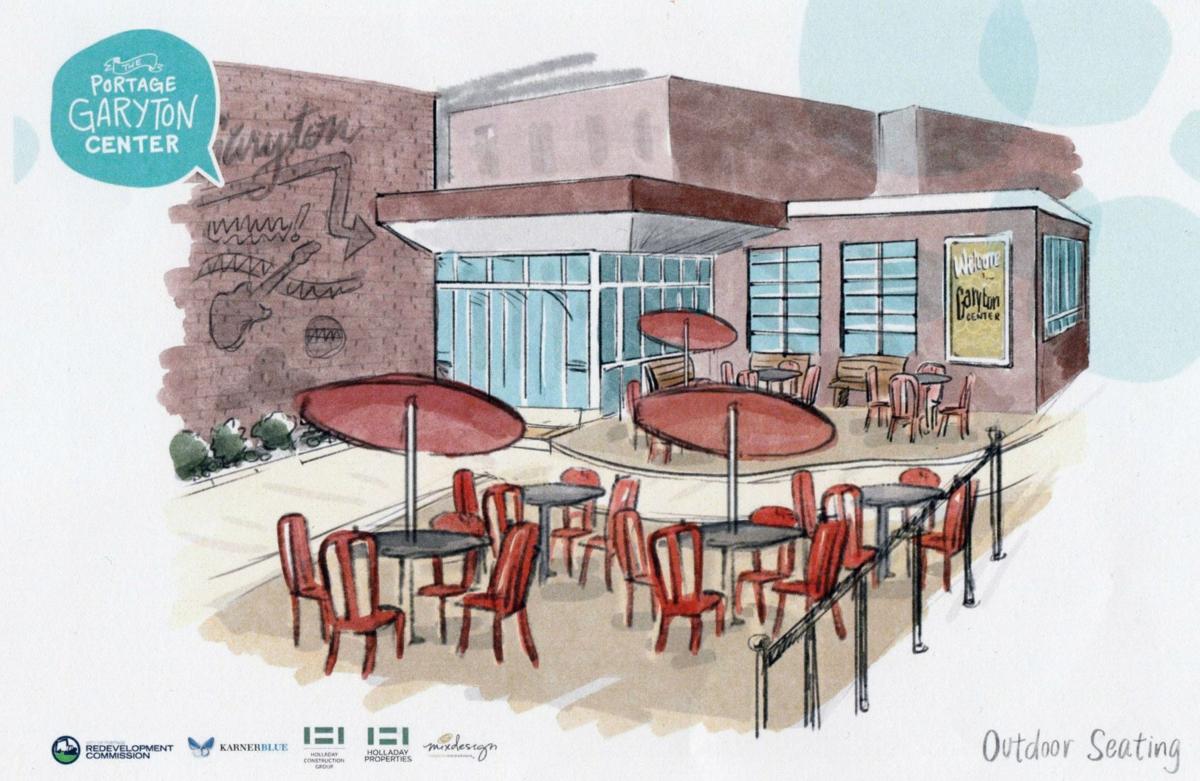 A rejuvenated entrance to the historic Garyton School building could include outside seating for a community cafe. 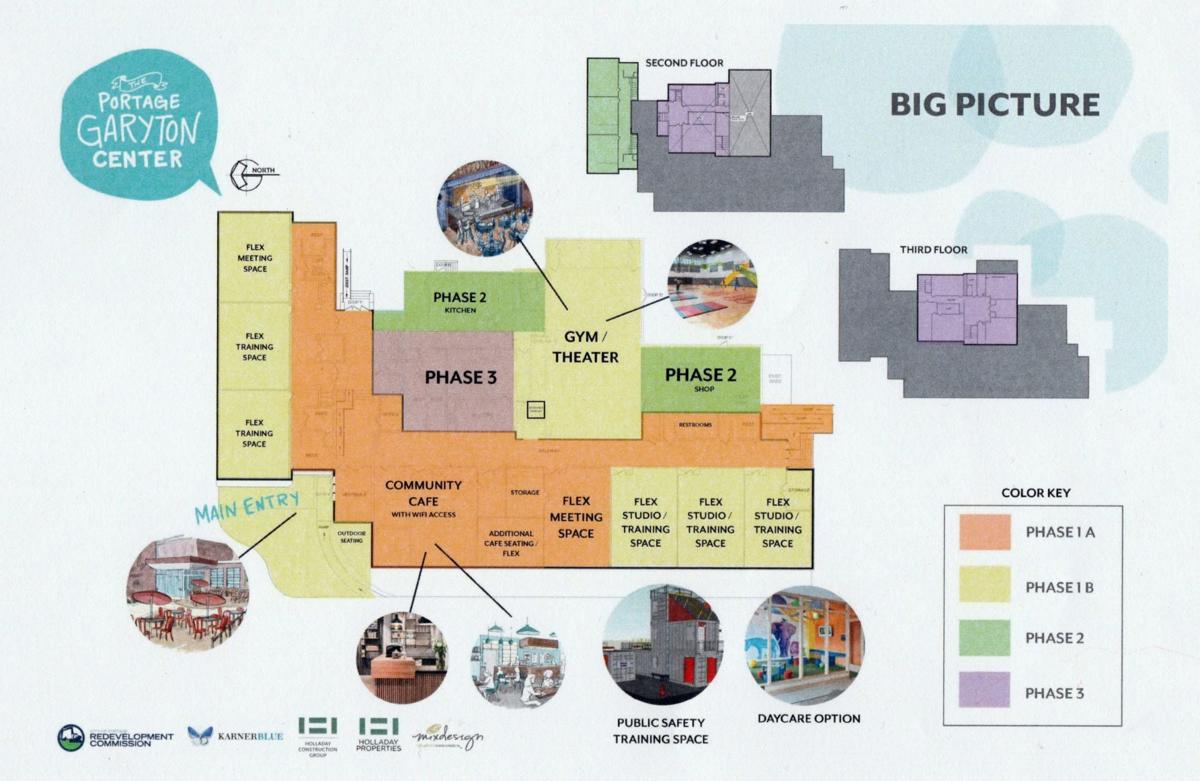 The Garyton School community center proposal is laid out in phases to make the project more affordable. 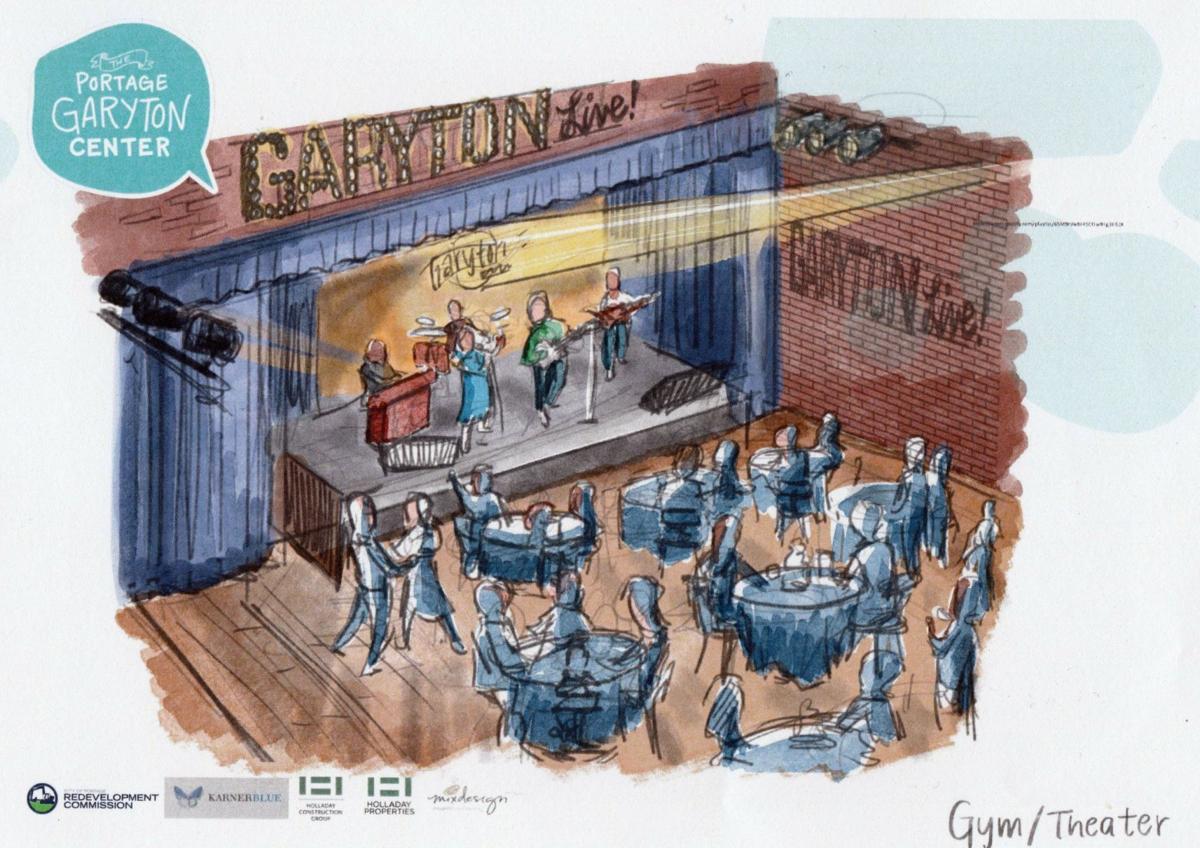 Strong community interest in showcasing local arts could turn the Garyton School gym's stage into looking something like this.

PORTAGE — A coffee shop could become a centerpiece at the entrance to a repurposed Garyton School.

The school building, which dates back to 1921, is believed to be one of the oldest commercial buildings in the city.

The city’s Redevelopment Commission heard Thursday from a team of consultants who worked three months on a reuse concept for the school that might have been torn down under a previous administration if the demolition cost hadn’t been so high.

The RDC received the information but hasn’t acted on it yet.

The first phase could cost about $2 million, with city workers and volunteers doing some of the work to bring the cost down, architect Laura Small, of Holladay, told the RDC.

The consultants propose a community center with multiple uses that would serve all of Portage, not just the Garyton neighborhood.

In addition to the café, the building would be well suited for showcasing local arts and culture as well as teaching life skills that might include personal finance and the basic auto skills like changing the oil or changing a tire, the team said.

A day care might also be housed there, or a public safety training facility for the city’s police and fire departments.

“Early on we determined this building was not suitable for market-rate or even subsidized housing," said Tina Rongers, founder and CEO of Karnerblue.

“Arts and education emerged as a focus for the building” in a series of community conversations about it, Rongers said.

The RDC’s role would be to stabilize the building and get it ready to hand off to a nonprofit to manage.

A nonprofit would be in a good position to seek funding from the Indiana Arts Commission, corporations, private donors and others, Rongers said.

Michaline Tomich, president and executive creative director of Mixdesign, offered a series of concepts for the building. One would have the community café and studios. A variant would include a day care center. An alternative would have a public safety training facility instead of the day care center.

The gym could double as a theater, and a workshop could be added as well.

The first phase — two phases, really — would include developing the community café, turning two classrooms into meeting rooms and four more into studios or training rooms. The gym and theater would be rehabbed, too, including adding curtains for the stage. An outdoor seating area for the café would be added in front as well.

Other phases would add a kitchen and a shop, and do additional work on the second and third floors.

Total construction costs for the entire project, not including things like fees, furnishings and surprises, would be about $3.2 million, or $79.60 per square feet.

Portage moves forward in effort to save former Garyton school

While the stately three-story brick building at 5391 Central Ave. had been marked for demolition, a group of city officials and concerned residents are now working on saving the building to give it a new useful life

PORTAGE — The City Council recently approved the expansion of the city's tax increment financing district into two areas of the city.

PORTAGE — City officials here are looking to expand the city's tax incremental finance district into two opposite corners of the community.

Some of the options for redeveloping the area include creating a TIF district, façade grants for building beautification or a zoning overlay to encourage economic growth.

Portage to pay back taxes on foreclosed property

Catalyst had planned a $75 million sports resort for competitions and conventions.

A rejuvenated entrance to the historic Garyton School building could include outside seating for a community cafe.

The Garyton School community center proposal is laid out in phases to make the project more affordable.

Strong community interest in showcasing local arts could turn the Garyton School gym's stage into looking something like this.