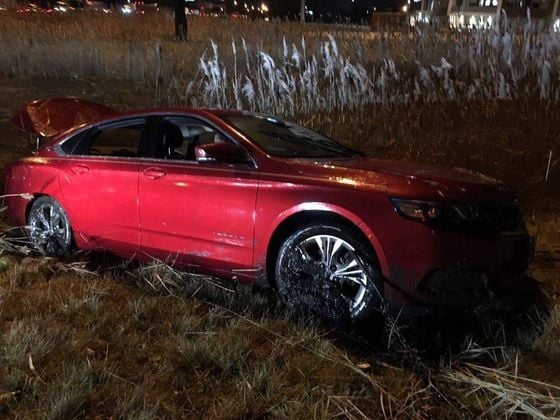 Three people fled a wreck on I-80/90 East in Hammond and the driver was found in a bathroom at a local hotel, according to police. 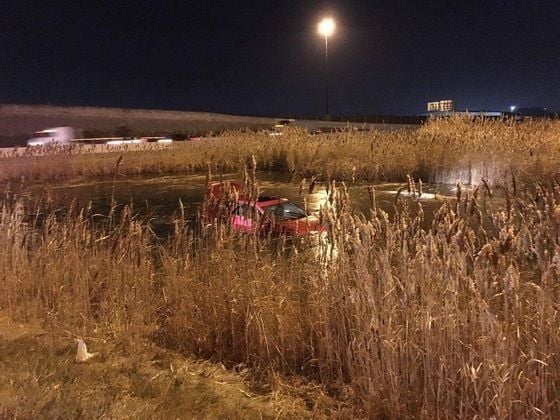 Indiana State Police responded early Thursday to the scene where a vehicle slid off the ramp from I-80/90 eastbound to Kennedy Avenue northbound and into standing water.

After three people fled a wreck Thursday on Interstate 80/90 East in Hammond, a woman hiding near the crash stopped breathing and had to be revived by police. Meanwhile, the driver was hiding in a nearby hotel bathroom, police said.

A motorist at the scene told police that two of the vehicle's occupants were hiding in the tall grass outside of the barrier wall.

A state trooper and a Griffith officer searched and found a man and woman hiding near the ramp.

The man, Anthony Luis Salinas, 28, of Hammond was arrested by Hammond officers on multiple outstanding Hammond and Lake County warrants, including two counts of operating a vehicle while intoxicated and leaving the scene.

The driver of the car, Gabriel Salinas, 38, of Valparaiso, was hiding in a bathroom at a nearby hotel, police said. After being found by the Hammond officer, Salinas told police that black ice caused him to lose control of the vehicle and drive into standing water.

Police said Salinas was found to be intoxicated and charged him with OWI endangerment and leaving the scene of a property damage crash. Police arrested Salinas and transported him to Lake County Jail.

The wreck closed the northbound Kennedy to I-80 eastbound ramp for half an hour. Multiple agencies assisted on the scene, including Hammond officers, Griffith officers, state troopers, Hammond EMS and Hammond Fire Department.

5 important stories you need to know from the weekend: Hammond woman charged with murdering 4-month-old daughter

UPDATE: Amtrak train splits car in half in Whiting, sending man to hospital; Indiana third nationally for crossing collisions in 2018

Hobart man tells state police to 'get a warrant,' so they did, charging 3 with drug possession, other crimes

HOBART — The discovery of a wrecked, abandoned car along the Indiana Toll Road on Tuesday night led state troopers to the driver's home in Hob…

A Hammond mother was charged Thursday in the beating death of her infant daughter, who was born cocaine positive in July, according to court r…

Three people fled a wreck on I-80/90 East in Hammond and the driver was found in a bathroom at a local hotel, according to police.

Indiana State Police responded early Thursday to the scene where a vehicle slid off the ramp from I-80/90 eastbound to Kennedy Avenue northbound and into standing water.