Bags of cocaine worth upwards of $2 million were confiscated from a trailer, police said. 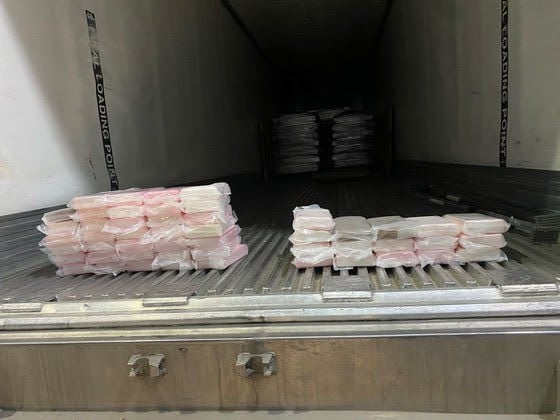 Police said a total of 50 kilograms of cocaine was found in a trailer on Interstate 94.

PORTER COUNTY — A stockpile of cocaine worth up to $2 million was discovered in a trailer hauling minced garlic on Interstate 94, police said.

At 1:15 p.m. Monday troopers were requested at the weigh station on I-94 eastbound, said Indiana State Police Sgt. Glen Fifield.

It was reported that a 2016 Volvo was pulling a trailer filled with 18,000 pounds of minced garlic. The vehicle was owned and operated by a company based out of San Jose, California, called American Roadies, Inc., according to Indiana State Police.

During the inspection, a staff member saw a black case which appeared to be inconsistent with the rest of the vehicle’s load. It was then discovered the case contained packages of a white substance, which later tested positive as cocaine, Fifield said.

Police reported that a total of 50 kilograms of cocaine, estimated to be worth $1.5 million to $2 million, was confiscated from the trailer.

The truck’s occupants were arrested without incident and the truck was impounded. Baljinder Singh, 37, of Indio, California, and Gurwinder Singh, 32, of Riverside, California, each face charges including possession of cocaine, the news release said. Both individuals were taken to Porter County Jail.

A woman was found Monday night suffering from a gunshot wound and other injuries as a result of a fight, police said.

When Anthony Varela noticed the woman was upset and crying, he asked if she was going to be OK and said he wanted to hold her, police said.

A 15-year-old boy and a 26-year-old man were taken to local hospitals after being shot Monday afternoon, police said.

"Some see this time as an opportunity for criminal acts to benefit themselves at the cost of our great citizens," the sheriff's release said.

Investigators are looking to speak with the owner of a gray or silver pickup truck that was caught on camera in the area where one of the thefts occurred.

Bags of cocaine worth upwards of $2 million were confiscated from a trailer, police said.

Police said a total of 50 kilograms of cocaine was found in a trailer on Interstate 94.