Nathaniel Asbury, 24, was sentenced to 60 years in prison for his role in the July 16, 2018, gang rape of a woman held at gunpoint inside her Hammond home.

According to court records, Asbury and two accomplices, Isiah Barboza, 19, and Elias Costello, 21, took turns sexually assaulting the woman when not stealing items from her home at the direction of the woman's sister, who was Costello's girlfriend at the time.

Barboza and Costello also each were sentenced to 60 years. The woman's sister is serving 23 years in prison, records show.

In his appeal, Asbury asked the appellate court to reduce the length of his sentence and to split his time between the Department of Correction, Lake County Community Corrections and probation, instead of requiring it all be served at the Indiana State Prison in Michigan City.

Asbury said despite the aggravated nature of his offenses in this case, he had no prior history of violence and still was ordered to serve the maximum sentence allowed under the terms of his plea agreement.

Moreover, Asbury argued his remorse shows his actions are not in line with his true character and his prison term should be adjusted accordingly.

The three-judge appeals court was unpersuaded.

It noted Asbury forced the woman to perform oral sex on him and he raped her vaginally all while the woman was sobbing, crying, whimpering, and begging not to be harmed — in "complete disregard for her humanity and dignity."

The appeals court also said it was disinclined to give too much weight to Asbury's guilty plea because the rape was recorded by a security camera, the odds of Asbury prevailing in a trial were extremely remote, and the only reasonable thing for Asbury to do was plead guilty to minimize his punishment.

In addition, the appellate judges said while Asbury was incarcerated at the Lake County Jail he had five rule violations, five room violations, one inmate fight, one lock down violation and one smoke violation. He also allegedly schemed with Costello to smuggle contraband into the jail. 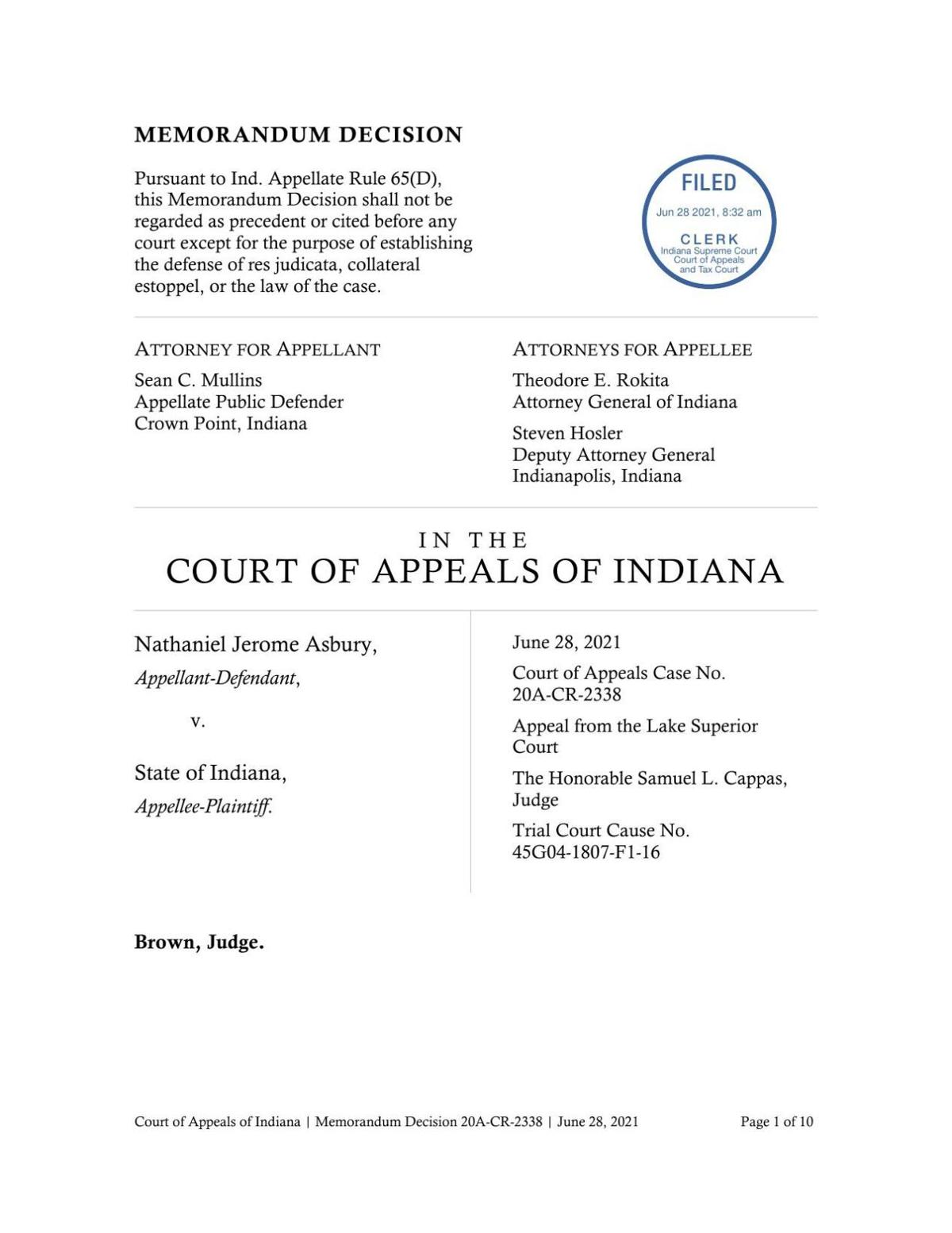 A 91-year-old Michigan City man sentenced last year to 20 years behind bars for child molesting is entitled to no reduction in his prison term, the Indiana Court of Appeals has ruled.

The Indiana Court of Appeals has affirmed the murder conviction of a Chicago man who who fatally shot a woman in 2017 in Hammond, hours after she fought with the mother of his child at River Oaks Center.